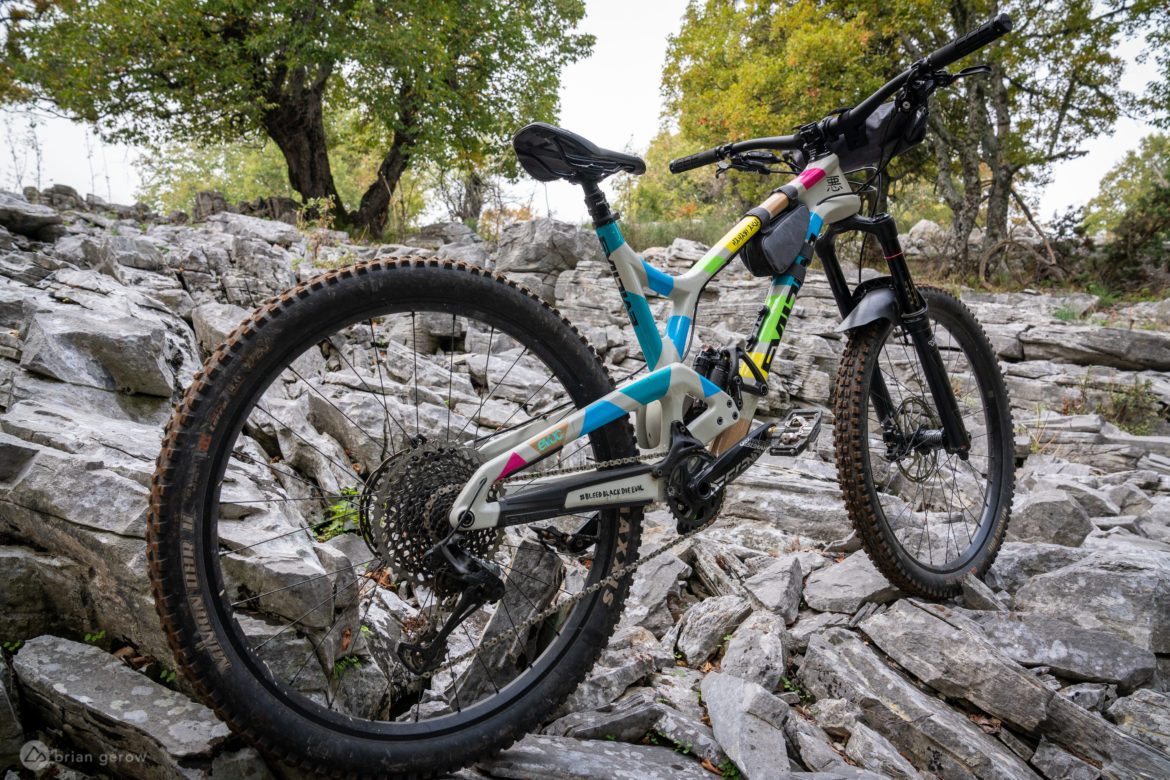 I recall having some rather realistic toys as a kid. Cars that resembled their full-size equivalent down to the dash radio detail, and functioned as similarly as scale would allow. Other toys were clearly created to stretch and expand our imaginations, rather than representing reality. The Insurgent LB from Evil Bikes feels like an adult size toy that was drawn by fantasy designers.

This version of the 27.5″ trail bike bobs about on 170mm travel up front and 151mm rear, though the frame plays happily with a 150-180mm single or dual crown fork. The “low” and “extra-low” linkage adjustments allow its pilot to dial in the BB height based on their riding style and chosen fork.

I was fortunate enough to borrow this particular Insurgent from Greek MTB tour guide, George Nanos, while touring his hometown trails around Mount Olympus. What a ripper!

George’s size large Insurgent felt closer to my own bikes than any other loaner has to date, which was surprising because I largely ride 29ers. He is a fair bit taller and heavier built than me, but his suspension setup was mint from the beginning. I sped up the rebound a click or two throughout the day, but otherwise, the bike felt amazing as it was.

The geometry table for this Insurgent LB is not a precise one since George’s whip doesn’t use the factory fork length. If the fork were 180mm, the bike would have an ultra slack head tube angle of 64.4° in the low position, and 63.6° in the extra-low spot. Though this setup is slightly steeper, that is a legitimately slack cut. The rest of the frame’s measurements lean toward the playful end of the spectrum, with a 430mm chainstay length and 449mm reach (size large). Those are not stretched tube measurements by any means, and certainly contribute to the bike’s overall balanced and playful sensations. At only 5’8″ (173cm), the large was undoubtedly the right size for my height and riding style.

The Insurgent climbed well enough that I would never complain about pedaling it, but I won’t kid you — it is built to descend. The suspension platform feels plenty supportive to climb with the compression switched all the way open and the tire tracks the ground as well as I would expect from a bike of this caliber. The front end definitely wanders around on technical climbs and slower flat trail, but the bike’s shorter reach helped the wandering feel manageable. Is it a bike to ride all day? Sure, as long as you get to enjoy its captivating descent story at some point. 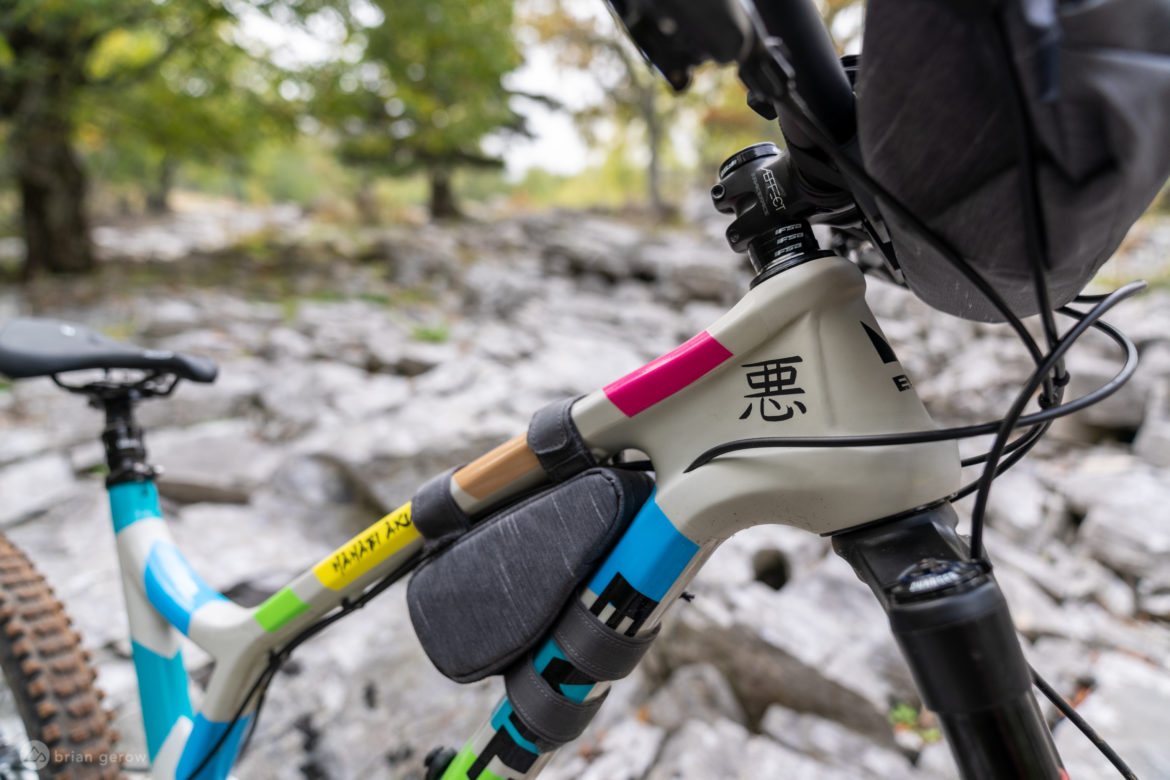 Pointed in the appropriate gravitational direction, the insurgent LB promises a wicked fun time. I felt encouraged to get loose, sideways, and aloft on the bike, rather than pointing it in a straight line and blundering through. Surely it will make a great battering ram if that’s what you need, but its overall demeanor would have you jumping over the castle door rather than smashing through it. Despite its brief chainstays, the Insurgent felt balanced and reasonably composed on rougher tracks, while remaining a little easier to bounce around than others. There are bikes better suited to the line-straightening demands of enduro racing, but for folks who prefer “party mode” this is a bike worth considering.

If you’re feeling overly encumbered with the stodgey 29″ vs.  27.5″ debate, as I sometimes still am, I recommend giving a long-legged 27.5″ bike a shot. This whip seems every bit as capable as my squishy 29er, and left me feeling that it could be better to have two wheel sizes in the bike stable.

As these things go, my first ride on the Insurgent was a great one, and I want more. Maybe the good folks at Evil Bikes will see fit to send one over for a long term review.

All Evil bikes share the same DNA and I’ve ridden all of them as my friend is the GA dealer. My own personal daily driver is the Wreckoning, their long travel 29er. I highly recommend taking one of these out if you get the opportunity. It has all of the party time playfulness of the Insurgent with the monster truck ability via it’s 29er wheels. I run mine with a -1 degree angleset giving it a 64.5 degree head angle (75 seat angle) in the X-low setting. I leave it like this all around. No other do-it-all bike has topped it for speed both up and down for me and the confidence it inspires is peerless. It is rumored that the new Wreckoning will drop before the end of the year, but the current one set the bar exceedingly high and is still reasonably relevant today despite having debuted at the end of ’15. #bleedblackdieevil

I’ve had the wreckoning for 2 years, I’d agree is amazing on the down. but I found the bottom bracket really low and seat tube angle too slack for climbing in x-low it’s at 73.9, (74.9 in low). I would buy it again if they would steepen the sta and make the low start at 65, with xlow at 64.

I’ve been thinking about trying a 27.5 build Evil. Going on 3 years now I have been on the Evil Wreckoning as well. Hands down it is ‘thee’ best handling bike I’ve ever owned, it does it all, very comfortable climber, excels on technical climbs incredibly well, and the geometry is spot on in all respects for me. I’ve had it set in extra-low almost since I built it up, and I would never run it any other way. Running MRP Coil front and rear and it is amazing. Been very curious to build up an Evil 27.5 so maybe I will. Every time I try another bike I simply can’t believe how perfect the Wreckoning is. Truly, Evil’s suspension is a miracle.

@Dr Sweets: Have you ridden the Offering yet? Curious to hear your thoughts. I ride a Transition Smuggler and am looking for a little more travel.

@whatshubdoc I have ridden the Offering and I think it would be exactly what you may be looking for. I have ridden The Smuggler as well and it is a great bike. The Offering be a more aggressive descender and likely give you more opportunity to ride like a hooligan. While the Offering is technically able to run 27.5 wheels it really isn’t designed for that and will perform better as a 29’er.