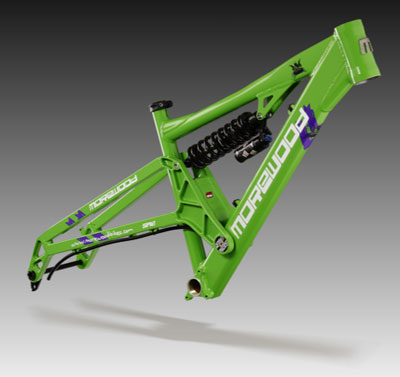 Pisgah Mountain News posted a business profile on Morewood Bikes USA last week and I gotta say, the bikes look pretty sweet. Admittedly I hadn’t heard of Morewood before – they didn’t make it to Interbike this year and have otherwise kept a pretty low profile in the US (only a single dealer so far in Asheville, NC). Despite such a low profile, Morewood team riders have racked up 2 US Men’s National Downhill Champion titles (Cole Bangart in ’07 & ’08), won the 2008 Canada Cup, and notched a Women’s NORBA Mountain Cross win.

The bikes are hand built in South Africa and the frames are imported to little old Fletcher, NC where the bikes are built up and distributed. Richard Beytagh and his son Gerrit (a champion MTB rider himself) picked Fletcher, NC as a base for the company’s US operations due to its proximity to well known mountain bike trails like Bent Creek in the Pisgah National Forest. While most of the models are focused on downhill and freeride, the company also produces a hardtail and even four-cross specific bikes. The most popular Morewood bike, the Izimu, is pictured above.

The guys are looking to expand distribution in the US so tell your local bike shop you want Morewood!

Yeah, the Morewood Izimu is a real sweet frame and if built up right, it makes an exceptional DH/FR specific MTB. They keep a low profile like Sinister but of course do not have the international fame like the Sinister DH/FR specific MTB’s have. I had an opportunity to ride one not too long ago, not race, just ride, and I was really stoked over the performace but like with the Sinister, the Izimu has some weight to it due to being beefed up.