Coming off the Independence Day holiday weekend I’m more pumped than ever about the good old USA, especially after reading about the Montague Paratrooper Folding Mountain Bike. The Paratrooper is a “24 speed mountain bike designed to endure any terrain at high speed in silence with no heat signature.” Damn straight.

Of course military off-road bike use isn’t new – in fact way back in 1896 the 25th Infantry Army Bicycle Corps (“Buffalo Soldiers”) rode their bikes mostly off road from Montana to St. Louis. The internal combustion engine pretty much wiped out all hopes of an Infantry Army Bicycle Corps just one year later (heat signature wasn’t an issue in those days) but it appears the military bike may be making a comeback.

The Montague Paratrooper has been designed from the ground up to handle the toughest combat challenges. First off, it’s a folding bike that requires zero tools which is important because troops oftentimes lose stuff in the field (like that torx 25 bit). Folded, the Paratrooper mountain bike can be air dropped on a “static line” giving airborne troops a stealthy, quick form of ground transportation, even behind enemy lines.

As a recon vehicle, the Paratrooper is super effective. Here’s how Montague describes the bike’s reconnaissance and security capabilities:

Using the Paratrooper Tactical Mountain Bike in conjunction with LAV’s or APC’s, allows the company increased mobility and security. The Paratrooper Reconnaissance model folds so you can attach it to the side of vehicle and serves as back- up transportation. The Paratrooper is a stealthy recon/scout vehicle able to travel with little to no thermal and acoustic signatures. 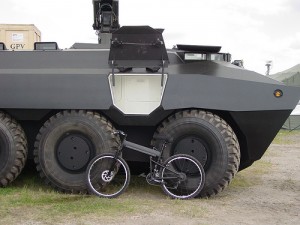 Mountain bikes allow troops to carry more gear, travel more quickly, and there’s no need to worry about fuel supplies (other than calories that is). Riding bikes is also a morale builder in the field – something that any troop will tell you is almost as important as all the other stuff. 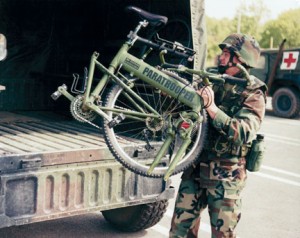 The bike itself uses off-the-shelf MTB components including SRAM X-5 shifters and 26″ wheels. The frame doesn’t have a traditional down tube and it sorta reminds me of the old Klein Mantra. Right now the bike is only available in one color – cammy green – but I imagine a desert cammo paint scheme may be in the works. It looks like civilians can order the bike online for $799 and this is definitely a cool bike to add to any collection!

Culture
For Military Veterans About to Ride, We Salute You
Culture
Mountain Biking With the United States Armed Forces Cycling Team
Culture
The Balance: Sir, This Mountain Biker Requests Permission to Use...
Culture
From Marine to Wheel Builder, Jerry Chabot Takes MTB Wheels...

Progression
Red Bull Formation is Back: Dig into the Lines as...
Progression
Feeling a Little Sluggish on the Trail This Spring
Community
Klunking for Kyle: Commemorating a Life with Mountain Biking's Original...
Trails
Reverberations from the Bike Boom Continue to Rock Trail Traffic
Subscribe
Login
Please login to comment
5 Comments
Most Voted
Newest Oldest
Inline Feedbacks
View all comments

Wonder if the tires are bulletproof.. Sorry had to add that in.

It’s a neat bike/concept, but having ridden one, it’s not all it’s cracked up to be, especially for the price.

I agree it’s a neat concept but speaking from experience any extra weight when jumping is not fun. I say make a huge bike rack, tie it down, and throw it out of the back of the aircraft. If a howitzer can do it without breaking then so can a bike. I’d rather search for it on the drop zone than jump with it strapped to me. What about all the other gear I have to carry? Mountain biking around the drop zone does sound wicked fun though! I wonder how you fire at the enemy while riding a bike…

Another reason to join up! “C-130 RUNNIN’ DOWN THE STRIP…AIRBORNE RANGER GONNA TAKE A LITTLE TRIP!”

Bought one 6 years ago to cary in my truck so I could get to trail heads to go hiking. (73 foot 80,000 lb trucks don’t fit at most trail heads). Needless to say I was hooked. Now ride a Full Sup. Stumpjumper, and still have my folding bike Makes a great do anything within reason spare bike.