Last year we saw Marin launch the Hawk Hill, a (relatively) affordable full suspension trail bike. This year, Marin expanded upon the Hawk Hill’s MultiTrac rear suspension platform to create the B-17, a plus-sized trail bike. The handsome brushed aluminum and black bike caught my eye at Outdoor Demo, and I took it out for a brief spin.

The B-17 sports an aluminum frame and is available in one of three builds. Coming in at $3,700, the B-17 3 that I rode sports a solid build kit. Highlights include:

Turns out there’s a reason the brakes looked out of place. The bike I rode was a pre-production model and was not spec’d with correct brakes. Production models will come with Shimano Deore M6000 brakes.

As for the geometry, the numbers indicate a well-rounded bike — one that isn’t skewed particularly toward climbing or descending. Considering the B-17’s modest travel, the geometry worked well for its intended purpose. Some key stats from the size large frame I rode include:

On Marin’s website they list the tires as WTB Ranger 2.8 front and rear, but the demo bike I rode had a WTB Bridger 3.0 up front instead. As is often the case with demo bikes, the tires were overinflated to reduce the chance of flats. It only took a couple turns to realize that the rock-hard tires weren’t going to play well with the kitty litter trail surface at Bootleg Canyon outside of Las Vegas. After letting out a considerable amount of air, the B-17 was more comfortable and confident over the rocky, dusty terrain. The Ranger’s limited tread helped the B-17 get up to speed quickly, while the burly Bridger cruised over jagged rocks without complaint. 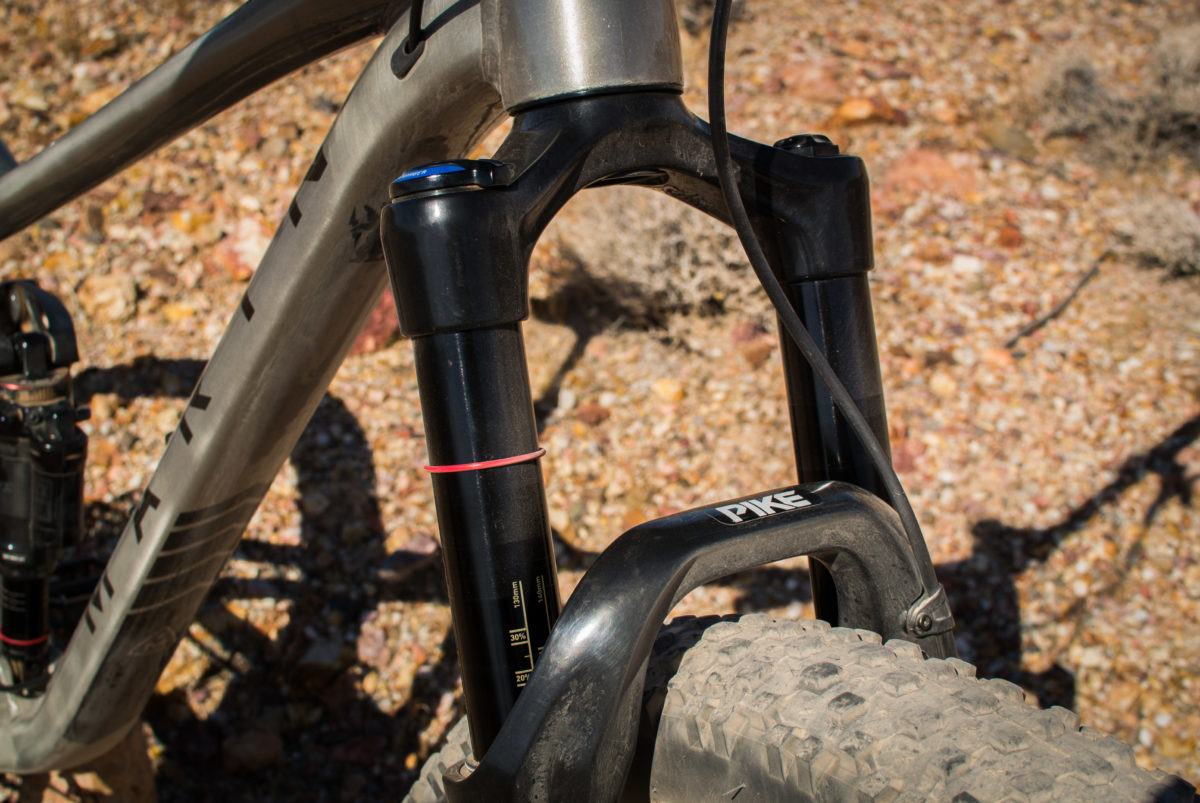 The MultiTrac suspension system is a linkage-driven single pivot that, of course, claims to balance big hit ability with pedaling efficiency. I didn’t go searching for any “big hits,” but I can report the B-17 was relatively snappy at the pedals, particularly for a plus bike. Some of the credit likely goes to the Super Deluxe rear shock that was supple and smooth. The rear of the bike was certainly more plush than the front, where the Pike felt like it had a bit too much air pressure for my liking, despite setting the sag around 20%. There was also an audible thunk coming from the Pike at top out, which was odd. Of course, this was a quick test ride, and the feel would likely improve with additional tuning.

For riders looking for a plus bike that doesn’t feel like a monster truck, the B-17 showed promise.