As I mentioned in my On Review article of the Marin Pine Mountain 2, I wasn’t immediately won over by the 27.5+ wheel size. Skeptical-but-intrigued is how I would characterize my attitude. Would getting some more miles in win me over?

Marin put together a badass build for the Pine Mountain 2 (PM2). Everything they chose provides a good bang for the buck, in my opinion. There were just a couple things that didn’t fully stoke my spokes. 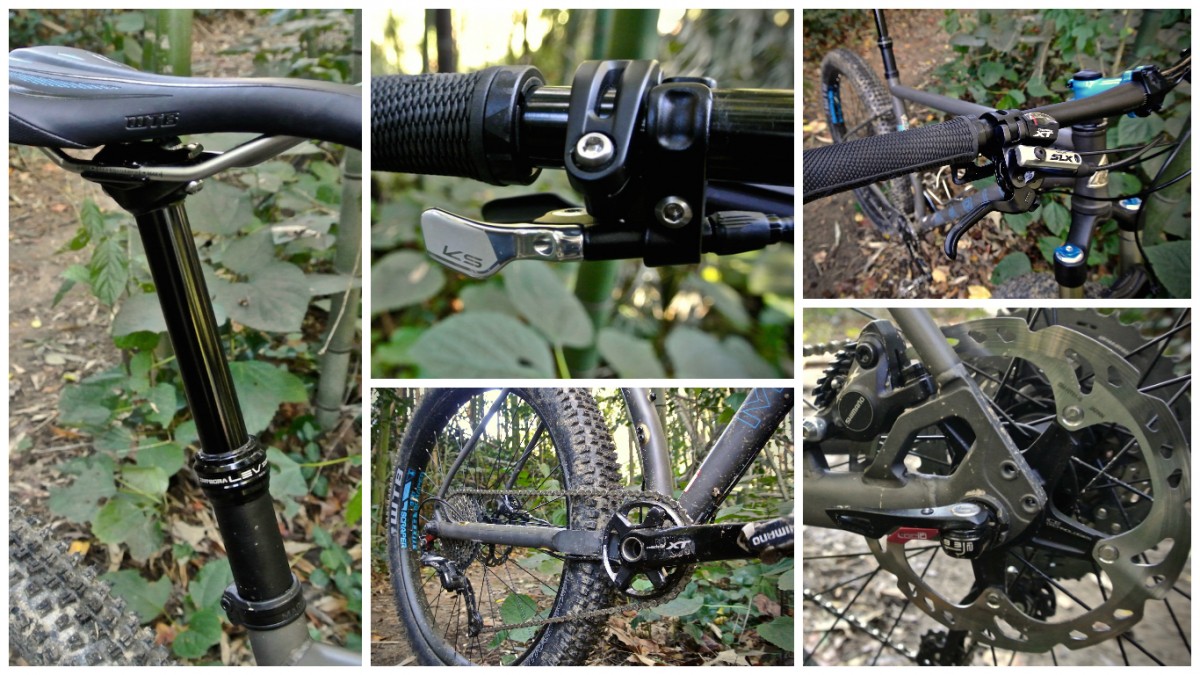 There are no surprises in the geometry on the PM2–most of the angles are comparable to what you’d find on a modern XC or light-duty trail bike. That said, the bike felt more confident at speed than I expected–more on that later.

Step one after receiving the PM2 was to ditch the stock Trailblazer tires and tubes. The Trailblazer’s flat top profile leads to weird handling traits. Luckily, there are numerous plus-sized tire options now available, and WTB was kind enough to send out two of their new treads, the Bridger and Trail Boss 3.0.

WTB’s Scraper rims can easily be converted to tubeless by taping over the spoke holes and inserting valves. You don’t even need to tape the entire rim bed–which is a good thing since it’s 45mm wide–just the center where the holes are. It would be nice if they came taped from Marin, because most folks with a plus bike are going to want to go tubeless for max traction and weight savings. After all, the stock tubes add 440g–nearly a pound–of rotating weight. Even with the wider than stock tires, converting to tubeless saved 200g per wheel. Nevertheless, making the wheels tubeless is a job that any rider can do easily.

Update, 03/28/16 at 2:00pm MDT: Good news! After posting our review, Marin got in touch to let us know that going forward, the Pine Mountain 2 will come with its rims taped for tubeless use, straight from the factory. Our test bike was a pre-production sample that was not taped.

Both tires from WTB measured out to 3″ on the nose, although they had very different profiles. The Bridger had a round profile while the Trail Boss was considerably flatter. It also seemed that the Trail Boss had a higher volume casing. Because of this, the Trail Boss appeared much larger than 3″. Fox’s 34 fork left plenty of room in the arch for tire clearance, but things were tighter out back. I could get the Trail Boss to buzz the chain stay when grunting up steep climbs. There was also very little clearance between the tire and the chain when in the easiest gear, but apart from getting some lube on the sidewall, it didn’t impact the ride.

The 11-speed XT drivetrain was close to flawless. Compared to my experience with the same group during my recent test of the Niner JET 9, lever feel was lighter, shifts were crisper, and the chain was less likely to drop down the cassette when pedaling backwards in the 42T cog. I had no issues with the SLX brakes and found them to be plenty powerful, even with a 160mm rear rotor. If this were my personal bike, I would eventually swap the rear for a 180mm, but I also weigh 200lbs.

I was impressed with KS’s top-flight LEV Integra post and loved the Southpaw remote. The lever paddle is very close in size and shape to a Shimano shifter and with the highly-adjustable clamp I was able to get the remote to mirror my shifter placement. I did have to employ the occasional “booty bounce” to get the post to return–a minor inconvenience–but overall the LEV was a solid performer.

Marin chose Fox’s stalwart 34-Series fork with an updated FiT4 damper for the PM2. This “Performance Series” fork might not have the blingy Kashima coating, but it was plenty smooth. I didn’t notice any undue flex under cornering or braking, either. Most of the time I rode with the fork in the open setting, and the 34 offered good support, riding high in its travel. However, the compression switch was nice to have for long stretches of road or gravel.

The only other small gripe I have with the PM2’s spec is the 725mm bar. As I stated in my On Review article, the narrow bar could make controlling the front end a bit of a wrestling match. A 3″ tire on a burly wheel ends up being a lot of meat to push around.

Alright, I got the tires sorted, and I was impressed with the rest of the build kit. But what did I think about this new(ish) midfat wheel size? When I first got the bike, fall was just setting in. A thick blanket of leaves and pine needles was covering the trails. These conditions aren’t the best for any bike, but they were even tougher for the big tires. With such a large footprint, there was too much flotation. I could drift the bike around corners, which was fun, but climbing sucked. Even at 15 PSI I was spinning out even on moderately-technical climbs.

My first few rides had me feeling pretty “meh” about the whole experience. Where was all this insane traction I was promised? What was the point of adding all this weight to my wheels?

As we progressed into winter, the leaves either got blown away or beaten down by the rain. Without so much crap on the trails, the PM2 started to come into its own, and I began to see the benefits of the fatter tires. Traction–going up and down–was stellar. It was truly a wholly different experience than riding my standard 2.3-2.5″ tires.

At moderate speeds, the bike’s XC-ish geometry made it feel snappy and nimble. For a 30lb hardtail, it was surprisingly agile and fun to jump around on. With that kind of playfulness, I thought it would feel twitchy at top speed. Well, I was wrong. When you get the PM2 up to “oh shit!” level speeds, the tires gave the bike a planted feel. With the extra cushion of the tires trail chatter was muted, which allowed me to look further down the trail. Looking further down the trail, I was able to go even faster. That’s a vicious cycle I can get behind!

I’m not saying that throwing a leg over the PM2 is going to make everything easier. There’s no getting around the weight of the wheels and tires. As Chris said in his review of the 27.5+ Norco Torrent, it’s best to “get fast and stay fast.” I couldn’t agree more. A fit rider that can stay on top of a gear and keep off the brakes will be rewarded with a slew of personal records. To my continued amazement, I could regularly improve my Strava times on segments of trail I’ve ridden countless times. Some of my old personal records that fell were posted during races where I was obviously getting after it. And the Marin is heavier than all but one of my bikes! The fitter you are, the more fun it is to ride any bike, but that’s especially true with the PM2.

On extremely tight trails–like those closest to my neighborhood–the Marin could be a handful. The geometry felt quick enough, but without momentum to aid me, the weight of the wheels was very noticeable. Getting the PM2 back up to speed out of every turn was more taxing than riding my 29er hardtail. But when the trails open up, even just a little, the PM2 could smoke just about anything in my stable.

Hopefully, I’ve made it clear that 27.5+ is not a panacea for all your mountain bike ills. As with all bikes, there are tradeoffs to be made. The stupid levels of traction are paid for with heavier wheels and a cumbersome feel on the tightest of trails. Initially, I didn’t think that trade made sense, but after spending more time with the Pine Mountain 2, I’ve changed my tune. Any lingering doubts I had about the performance benefits of the larger tires were dispelled through concrete data. In most situations, I’m faster on a 30lb hard tail with 3″ tires than my other bikes. And frankly, I’m still trying to wrap my head around that fact.

I took a short test ride on this bike and was also surprised at how well it handled, especially given how heavy it felt on first inspection. With the 2.8″ Trailblazers swapped out for full 3.0 tires with proper pressures in the teens, the PM2 really connected with the trail and held lines as well as almost any bike I’ve ridden. And this is a hard tail!

I will say the size large frame felt small to me (I’m 6’3″). The tires worked great on dirt but felt a little fat-bikey (sluggish, loud) on the road. Overall a great bike!

I positively loved the PM1.
Now I want to give the PM2 a try!