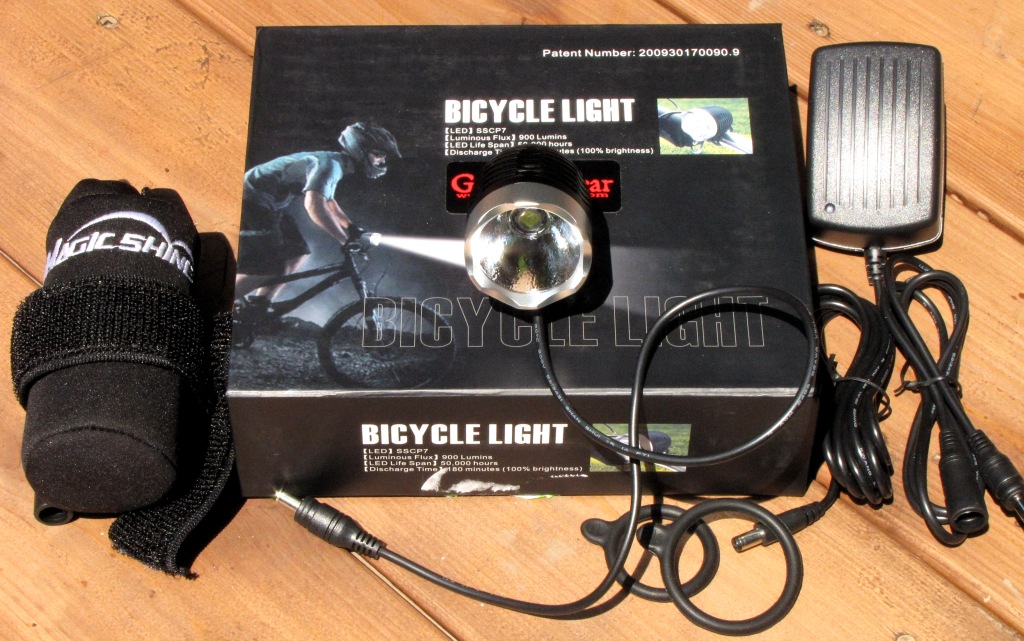 Now here is something for almost everyone who wants to mountain bike at night: the MagicShine GMG Special 900 PLUS light set. Now read the next sentence carefully: At $89 you get an LED lamp advertised at 900 Lumens with a lithum-ion battery and charger. Basically you get a high powered lighting system that can be taken off road and will not take you to the poor house!

Admittedly I was shocked at the low price and had to investigate these lights for myself. The neatly packed box includes the light, battery, charger, and extension cable. The light itself features a sturdy aluminum construction with a single LED emitter and reflector with the mount integrated and held in place with a strong rubber o-ring. In fact the box includes a total of four o-rings (two larger, two small) for multiple bike mounting options. The lamp is adequately sealed for MTB-type riding, though I would think twice about submerging this unit completely under water.

The battery sports a 12-inch cable and GeoManGear also includes a 1-meter extension cord. The lithium ion battery pack is a 4-cell 18650 battery sealed in an aluminum shell. All of this is contained in a neoprene bag that can be attached to your bike (seatpost or toptube) or to your person (hydration pack or jersey pocket) using the extension cable. 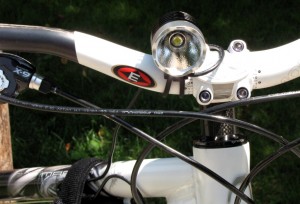 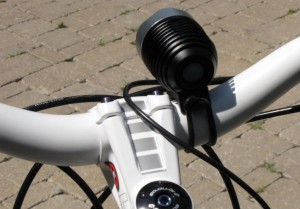 The Magic Shine features 5 modes of operation: three power levels (high @ 900 lumens*, medium @ 500 lumens*, and low @ 200 lumens*) plus a fast strobe flash and an SOS mode (blinks SOS in Morse code). Plugging in the light to the battery illuminates the power switch at the back of the light which is good and bad. In total darkness it’s nice that you can see the power switch. But in the back of your mind you can’t help but think about the fact that it’s consuming precious battery life Speaking of battery life you should get about 3 hours** of run time with the MagicShine GMG Special 900 on high power. Charging the unit takes about 4 hours. 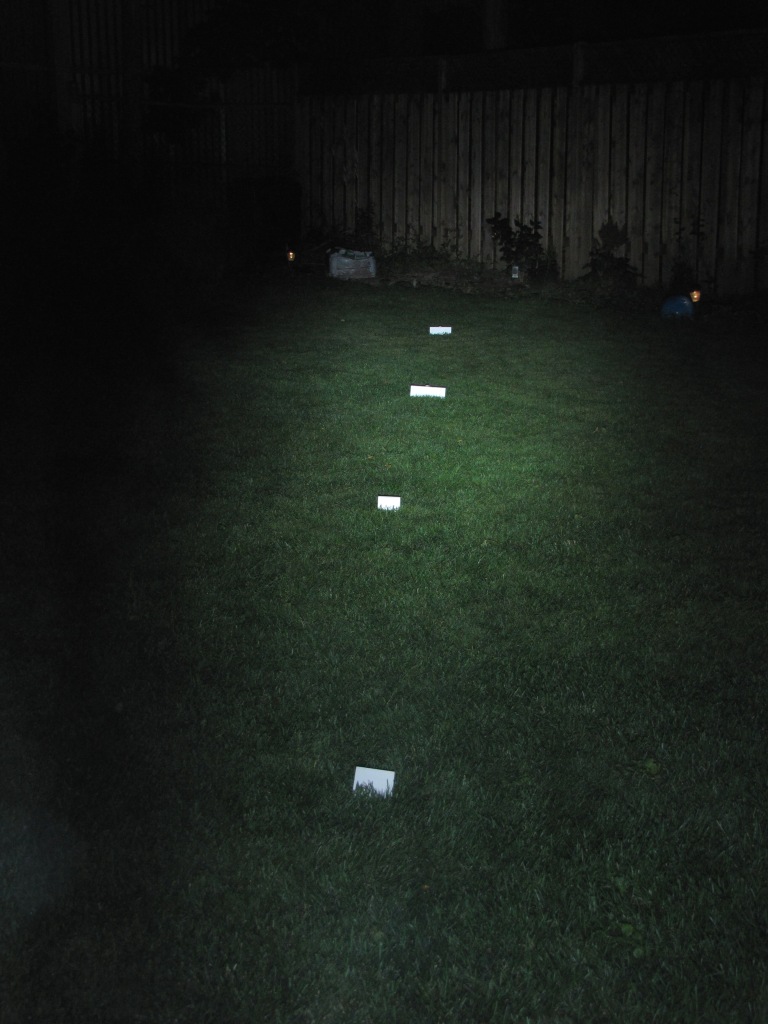 After using the Magic Shine GMG Special 900 I have to say I don’t think it fires a full 900 lumens (my guess is closer to 550 or so). Just remember this unit only costs $89 and includes just a single LED emitter and not an array like pricier light sets (some of which can cost up to six-times as much).

Despite only having a single LED, the beam pattern is actually pretty decent and useful. Essentially the reflector produces a mixed pattern with a strong central beam and a mediocre outer pattern. Looking at the photo above you can see a series of blocks set at 10 foot intervals and the last two block are 9 inches wide to represent a thin trail. You can see at about 25 feet the pattern is around 6 feet wide which is fine for most riders. What you don’t see is the secondary fill light (hard to take a photo of) which is decent but not as pronounced as other units on the market. This is the main difference between the MagicShine light and more fully-featured lights – after all, there is only so much you can do with a single LED. Still, even hardcore 24-hour racers should be mostly happy with the performance of this light.

Overall I have to say if you keep in mind the cost of this unit and assume the advertised light strength isn’t as high as claimed, you will still be very happy to operate one of these GMG Special 900 Plus lights. You get everything you need to mount this on your bar and for an extra $10 you can get a helmet mount, adding to the flexibility of this unit. Although some of the details aren’t as refined as other brands out there (example: light cable configuration is slightly awkward) it’s still a super value. With a 90-day warranty, if anything does go wrong GeoMan will take good care of you (though nothing went wrong while I was testing).

I would like to thank GeoMan for supplying the light for review. Visit GeoManGear and take a look for yourself.

I have been using the previous version to this one (really not much of a change except for the battery change) and it works very well. I would say it puts out an output of around 700 than 900 advertised by Magic Shine, but even then, it has a near perfect light pattern and very bright. I would not recommend running on medium or high in the urban seen, as it is very blinding. Actually a good thing really, lets the drivers you are there so they will pay attention for a change. I use mine on the bars or helmet mount, and even a combination of bar and helmet when in the FL jungle at night. The two lights combo works exceptionally well on the dark trails. I even had the light mounted on the bars and on the helmet while doing crazy drops, DJ’s, walls rides, etc while riding urban assault or trail at night. Absolutely great light by far, especially for the money. You cannot go wrong here!

I literally got the last one sold at Jenson and the other one at GeoMan (RIP bro). Geo Man will set you up right and is an exceptional outlet. Again, RIP GeoMan!

Light output from these vary quite a bit. The main reason these are cheap is the fact that Magic Shine buy second tier LEDs, basically factory seconds. So one lamp will put out 500lumens. Another might put out 800. They tend to run on the lower side, though. But for the pricepoint they are pretty much unbeatable. Another source for these lights is DealExtreme. But GeoMan has faster shipping and better service IMO. Thanks for the review!

See if you can get ahold of the next version up and reveiw it! I think it’s called the 1400. I was actually looking at these units a week ago so this is very timely info. Thanks EL22!