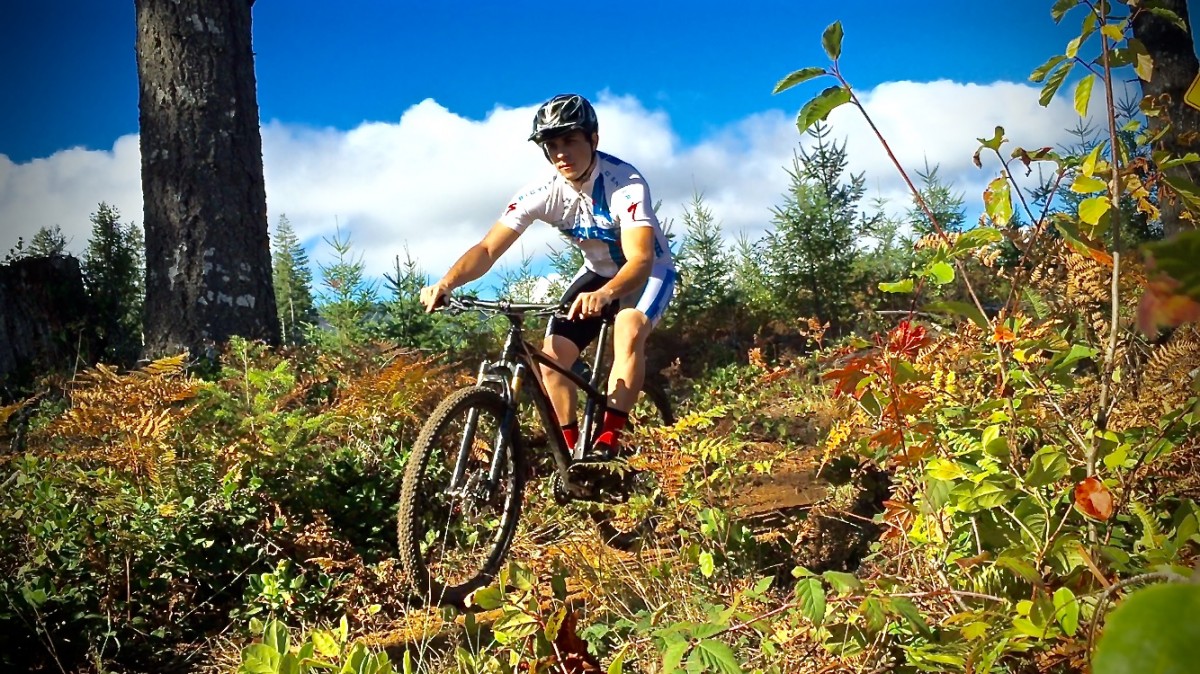 Hardtail mountain bikes: simple, light, stiff, and in the case of the Syncline 9 from Polygon, add to the description: really, really fast! Ideally we’d all be able to afford a separate bike for each type of riding, but at the very least, and for the reasons I listed above, mountain bike enthusiasts should invest in a hardtail as a secondary steed (if you don’t already have one as your primary bike). There are certain characteristics about a hardtail that make some trails, otherwise boring on a full suspension, come alive. There’re also certain characteristics of an XC race bike you cannot overlook when attempting to podium. The Syncline 9 is a weight-sparing, spare-no-expense, hardtail whip of a ride that, while aimed at pleasing the cross country race crowd, is sure to light up singletrack where burlier, full squish bikes are too overwhelming.

Before you jump into this, the final review, check out my On Review of the Syncline 9 where I look at geometry, build specifications, and include detailed photos. 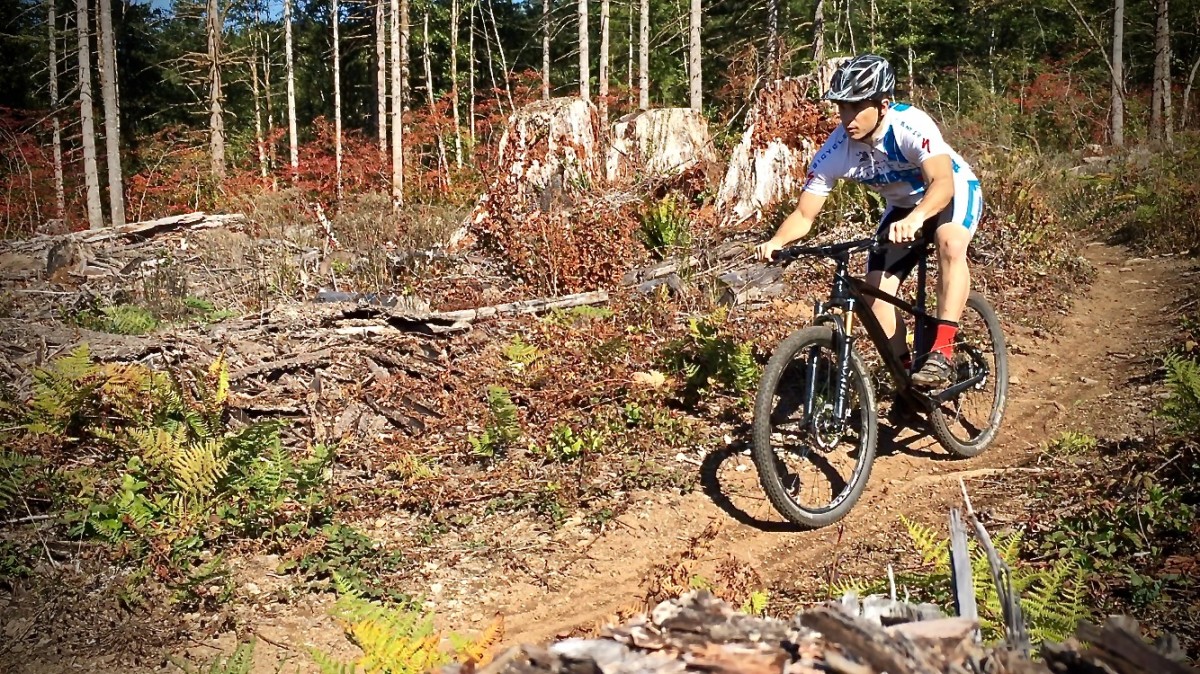 In the interest of full disclosure, XC racing isn’t really my bag of chips… but it used to be. In fact, it was the only thing I did when I started mountain biking nearly 14 years ago. While most of my amatuer, pretty fast-for-a-slow-guy racing was done on shorter travel full suspension bikes, I’ve since owned hardtails in nearly all their variety. So it was time to return to my roots, break out the bibs (yes, I suffer for my art), and pack my pockets to bring you a full review of Polygon’s XC race machine, the Syncline 9.

I’m not going to waste your time telling how well the Syncline 9 climbs. It’s a carbon fiber hardtail! Every muscle contraction produced in an effort to turn over the cranks feels like it is transmitted directly through the bike, resulting in forward propulsion. And yes, this bike is that stiff. The superior climbing ability of the Syncline 9 was especially helpful as I was learning the nuances of the Shimano Di2 shifting, resulting in several out-of-the-saddle scrambles up steep slopes in the wrong gear with no problem.

Much has been said about 27.5″ wheels being the optimum size for all-around riding and while it’s mostly a matter of preference, in my mind the mid-sized hoops somehow made less sense logically on a purebred XC race bike. Nevertheless, more companies are developing their XC bikes around the 27.5″ phenomenon for quicker acceleration and flickability–characteristics the Syncline 9 definitely retains.

At 5’8″, I fit squarely on a medium (17.5″) frame, yet somehow this bike has a comfortably compact feel, making it easier to throw around tight, twisty trail and make finite adjustments at speed. Aside from geometry and hoop diameter, some credit in regards to handling must be given to Polygon’s choice of using the 9000 series XTR wheels that, unlike the majority of the Syncline’s make up, are alloy. The Shimano wheels held up well under the rigors of my riding, which more often than not favors plowing over finesse, and I found the aluminum to be so stiff I had to double check that they weren’t carbon. 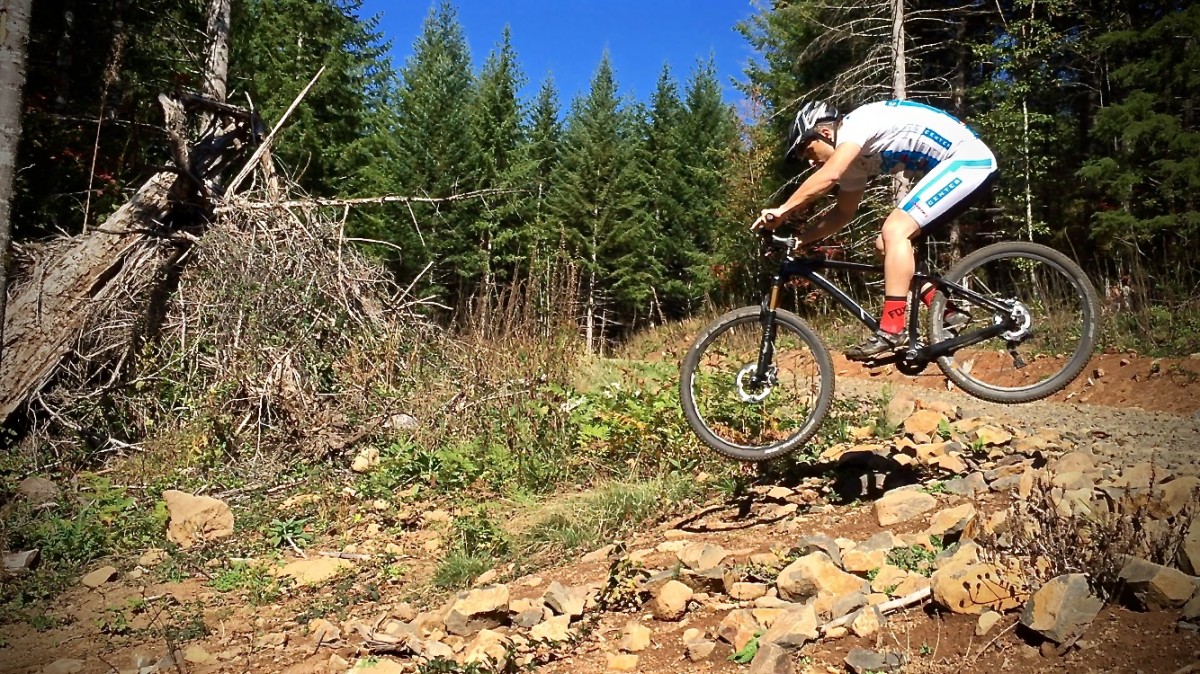 Although the rainy, muddy, most bike-wearing months are ahead here in the Pacific Northwest, I had zero issues with Shimano’s electrifying Di2 drivetrain. Shifting was smooth and reliable, cables are thoughtfully integrated into the frame, and while it would behoove any Di2 owner to bone up on the 94-page owner’s manual before riding, the digital unit is fairly intuitive. In regards to the battery, Polygon places it inside the seat post and (per Shimano) as long as you DO NOT go swimming with it (fresh or sea water), throw it, or use the battery as a weapon, it will not explode–all of which could theoretically occur over the course of any ride.

Beyond the confines of an XC race course, the Syncline has its limits (as with any race bike), but even with a lean figure and XC geometry I felt relatively comfortable pushing it on terrain for which it wasn’t necessarily designed. The long front-to-center and slack (for XC) head angle contributes to its more-than-adequate downhill and technical handling. That said, the Syncline 9 is definitely no axe in rougher terrain, but more of a scalpel, where those with excellent line choice and near-seamless handling are rewarded most. 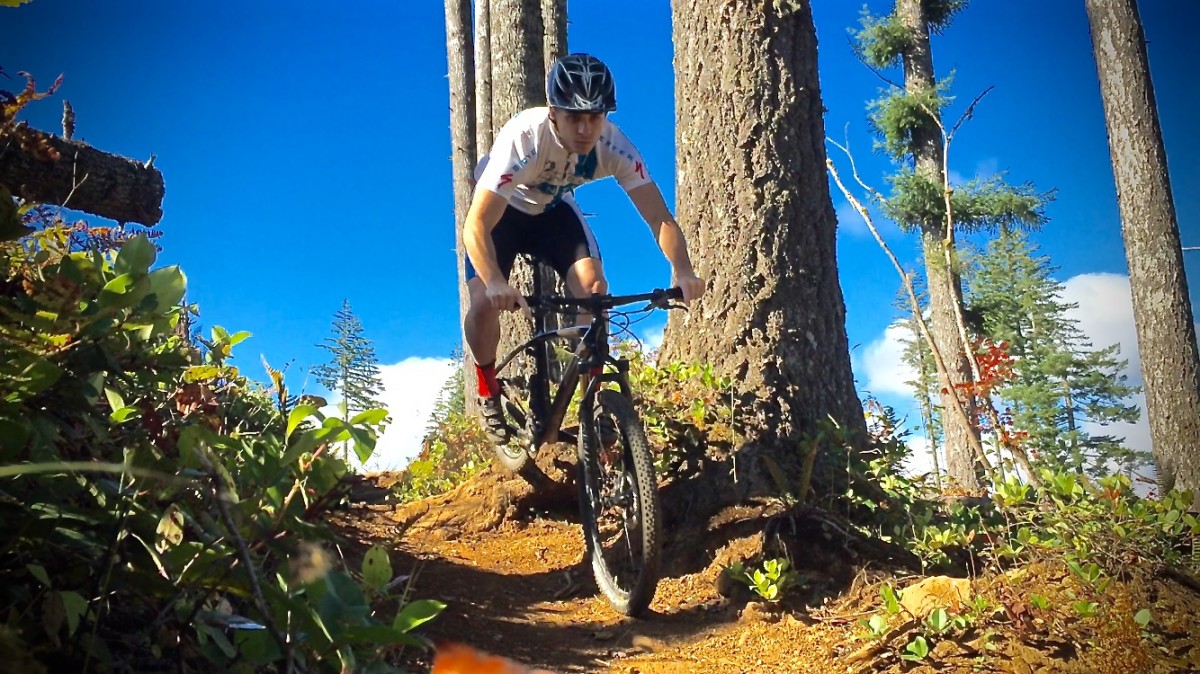 Polygon employs a Fox 32 Float Factory Remote for suspension duties and, like the rest of the Syncline’s components, provides unyielding performance. The handy-dandy CTD handlebar remote is a nice touch, allowing you to toggle between dampening settings. Because the Syncline 9 is a race bike, I wouldn’t remove the remote per-se, but I found it mostly unnecessary, save on longer road climbs. Polygon designed the frame around a 90-100mm travel fork and, in fear of whacking out geometry and adding weight, I wouldn’t advocate putting anything longer or larger than the stock 100mm, Fox 32.

So where exactly does the Syncline 9 belong, and who benefits most from this bike? As Polygon describes, the Syncline was designed to seize XC podiums. Given its exceedingly stiff feel, comfort may come into question during ultra-long races (24-hour, 100+ miles, stage races, etc.), but many die hard hardtailers do it, and I’m simply warning you: this bike does not flex. That said, its lack of heft will never be the rate limiting factor in its performance if you choose to ride it for the long haul. For me, the Syncline is most fitting for short- to moderate-length XC and short track lap-style races, thrashing tight and twisty woods, hardtail weight weenies, and those who dabble in cyclocross but don’t want a cross-specific bike. 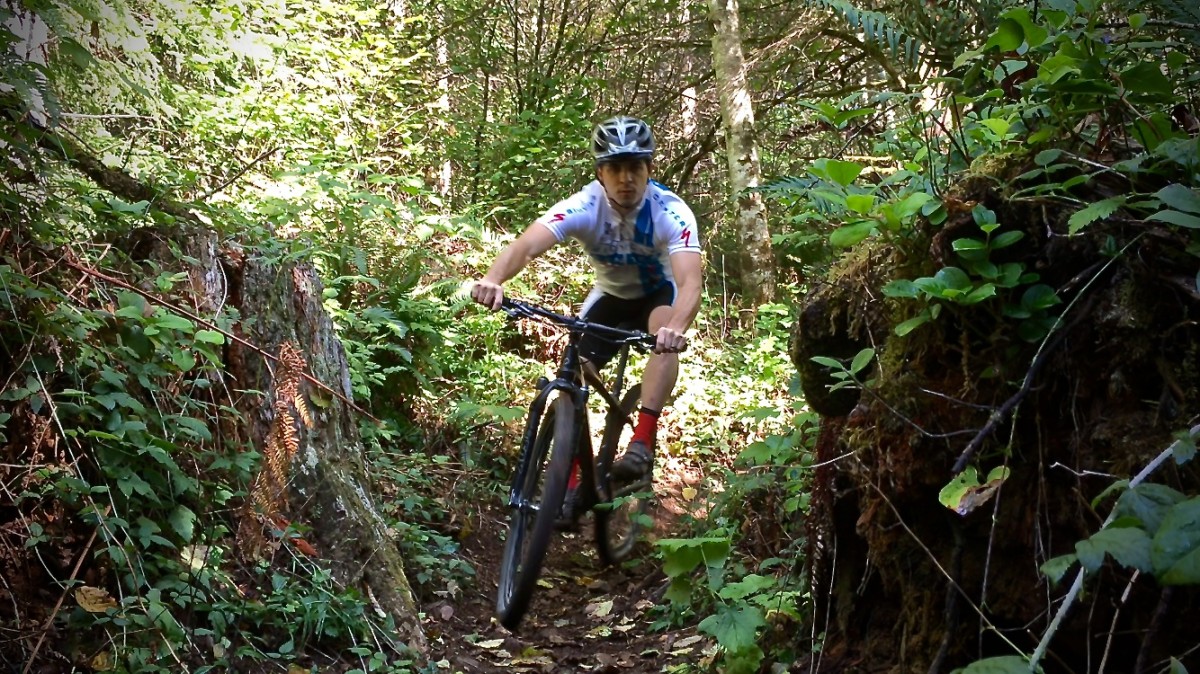 Here we’ve showcased a red carpet build at red carpet price ($5,699) from Polygon, but you can rest assured the same ACX Advanced carbon frame comes in your choice of three other builds, starting at $1,799. All Polygon bikes are backed by a five-year warranty on the frame and what’s more, Polygon offers a one-time full refund within 14 days of receiving any of their mountain bikes purchased through their online store, if you’re not satisfied.

Interested in a Polygon, but not so much in an XC race bike? Check out their full line of bikes, including everything from downhill to dirt jumping. 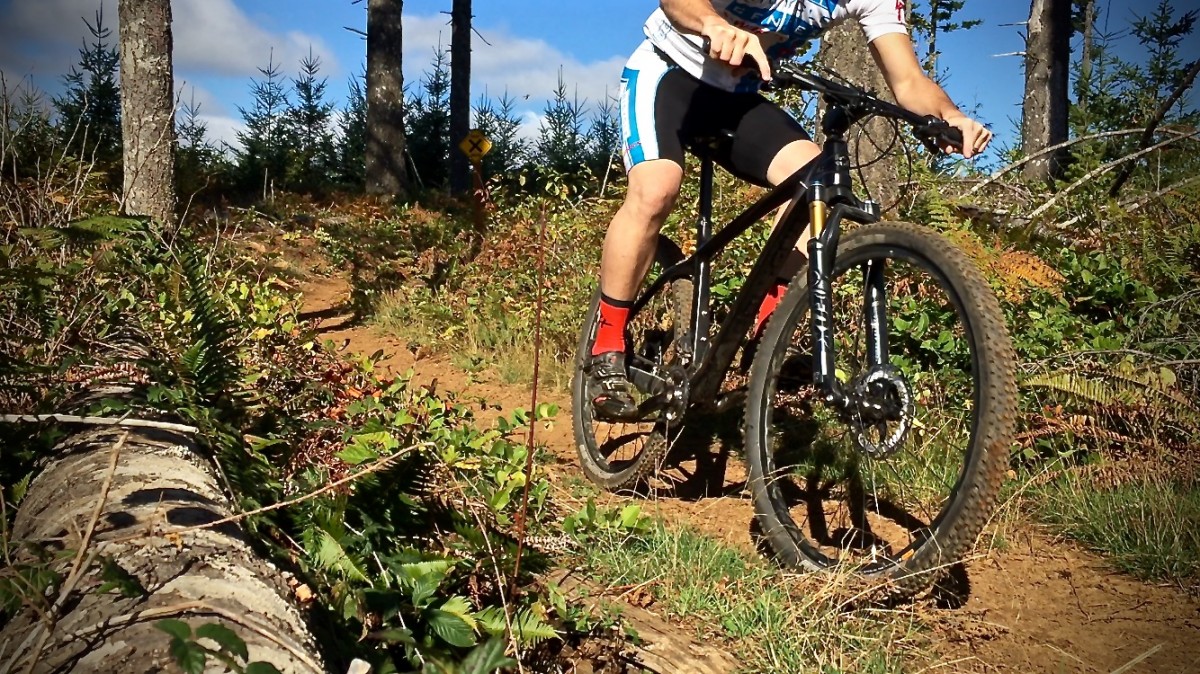 Honestly, $5,699 for a full carbon, Di2-equipped race rig with XTR wheels is a pretty amazing price!! To help put that into perspective, the KTM with that component spec, one build higher than the one John rode, retails for $10,000!! Also, $1,800 for a fully-built rig with a carbon frame? Also a pretty exceptional price point!!