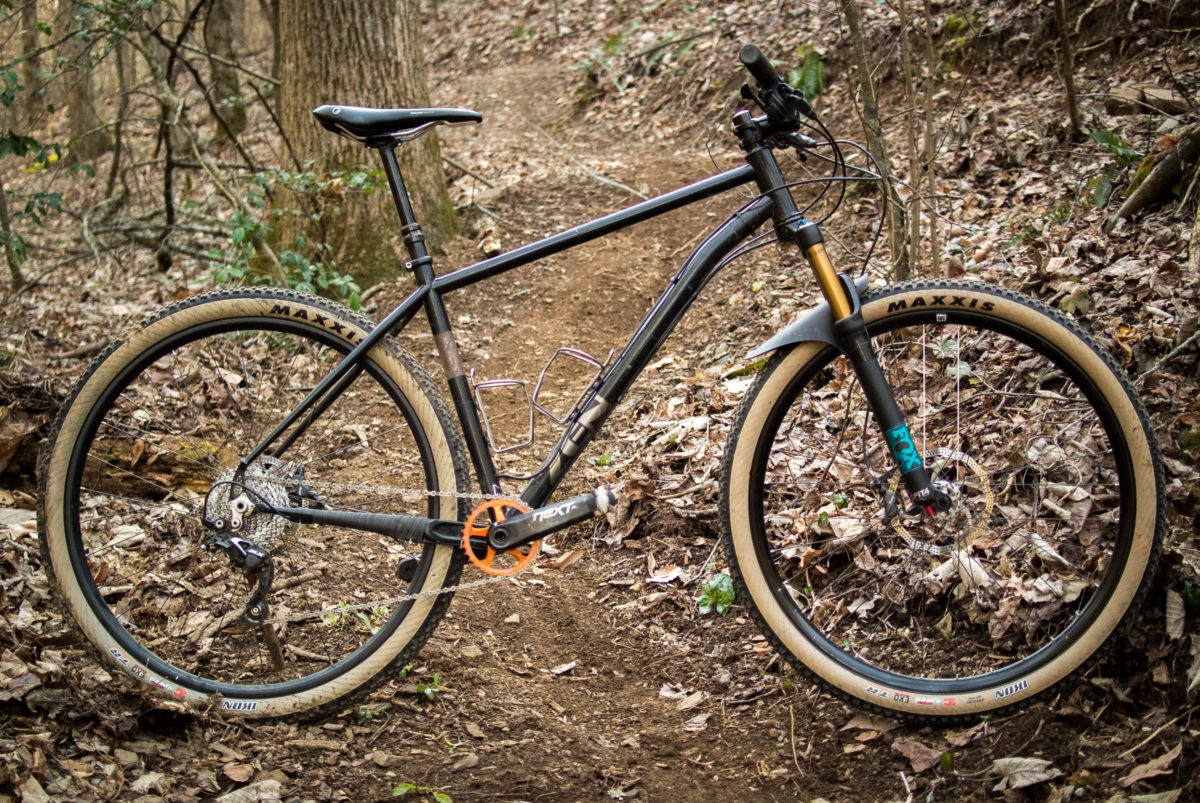 Pulling the chunky Race Face Next SL G4 carbon arms of the out of the packaging, I let out an audible, Keanu-worthy, “Whoa!” These things are stupid light. And pretty to boot. With a 32T chainring mounted, the cranks weighed in at 438g (430g claimed)–excluding the bottom bracket. To put that in perspective, a Shimano M9000 XTR crankset in a similar configuration weighs around 590g, about 1/3 of a pound heavier.

The beefy aesthetic and gossamer weight creates a bit of a disconnect in your brain when you hold the cranks in your hand. “How can they be this light?” And also, “If they are this light, how are they going to hold up on the trail?” After several months and countless revolutions, I’ll tell ya.

If you’re dropping $550 on a crankset, you want to be sure that it’ll be compatible with a new frame down the road. Luckily, Race Face has your back with their Cinch system. With Cinch, riders can swap out the spindle, so the same crank can be used on a trail bike or a fat bike. For those running a 1x drivetrain, Race Face offers direct mount rings. However, Race Face offers interchangeable spiders as well, so you can run a 2x or even 3x drivetrain, all on the same crank. The chainrings or spiders mount to the crank arm via a lock ring which, requires a 20-tooth splined BB tool. After years of collecting dust, my Park Tool BBT-22 finally has a purpose again!

The cranks are offered with your choice of five different colored decals, and rings come in six colors. Crank arms are available in either 170mm or 175mm (tested) lengths.

Initially, I had intended to slap these bad mama-jammas on my personal trail bike, a 2015 Kona Process 153. This particular bike uses a press fit 92 bottom bracket. Since the Next SL G4 cranks use a 30mm spindle, and my old cranks used a 24mm spindle, I had to swap out the BB. So, I knocked out the old BB, pressed in the new one and mounted up the cranks.

To my dismay, those chunky arms didn’t leave enough clearance at the chainstays. I contacted Race Face about the fitment issue, but there wasn’t an ideal solution. In their defense, I will say the Kona has some unnecessarily wide chainstays. My previous cranks were SRAM XX1 with the wider 168mm Q-factor, and they just barely cleared the chainstays. Also, Race Face mentioned that a bike like the Process 153 was at the upper limit of the Next’s intended use. The good news is Race Face offers the SixC line of carbon cranks, and they’re rated all the way up to DH use. Depending on what or how you ride, those may be a better option.

In the end, the cranks ended up on my hardtail, the Zen Trail. Apart from the fitment issues mentioned above, installation was straightforward thanks to the easy-to-follow instructions from Race Face. The only other thing I would note is the need for a 16mm hex key to keep the self-extracting top caps in place. Since these are tough to come by and not really needed for anything else, I’d recommend picking up one of Race Face’s 8mm to 16mm adapters.

I’m not overly concerned with the weight of my bikes, but I shaved half a pound off my hardtail by swapping in the Next cranks. Light weight sounds good on paper, but as a large, powerful rider, stiffness and strength are my main concerns. Any concerns about the cranks being delicate were quickly laid to rest, though. I couldn’t detect any flex in the arms, even cranking up hellacious, technical climbs. I didn’t baby them either. I rode my bike just as I always do, seeking out every little gap and jump along the trail. That’s not to say I went huge on them–I didn’t (and I don’t really go huge anyways).

The cranks come with thick, clear stickers to protect the arms, but I somehow tore the one on the drive side. Because of this there is a little wear on the arm from my shoe. Race Face includes a pair of crank boots to provide protection from rocks, which weigh next to nothing. Dirt got trapped between the boot and arm and caused a small amount of scuffing, but that’s better than a deep gouge from debris.

Over several hundred miles, the cranks required little maintenance. I did have to adjust the preload collar a time or two, and the lock ring on the chainring came loose once. That one took a minute to figure out. My drivetrain developed a clicking and it wasn’t until I had taken my BB out, cleaned it, and reinstalled it that I finally figured out what the problem was. A half turn of the BB tool later, my drivetrain was once again quiet. I should also mention that Race Face’s narrow-wide chainring shows minimal wear even after hundreds of miles, and chain retention remains excellent.

It’s not often that I would consider a bike part an “investment.” And, no, I don’t mean that these cranks will be worth more in the future, allowing you to buy a yacht and retire early. What I’m talking about is an investment in the best equipment available, an investment in your enjoyment. The Race Face Next SL G4 cranks are a component that you can take from bike to bike for years to come, and thanks to the Cinch system, they’ll be ready when the industry rolls out Double Plus Boost Mega Supreme spacing.

Thanks to Race Face for proving the Next SL G4 cranks for review.