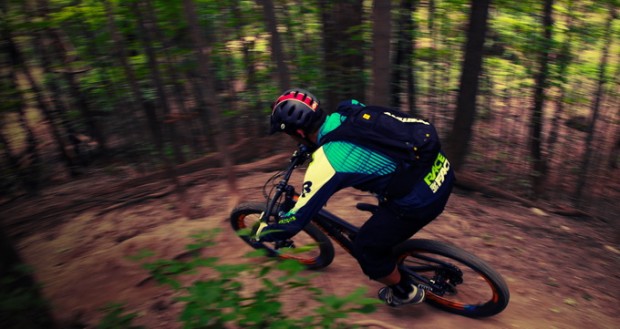 Way back in October 2013, Greg posted a short review of the Santa Cruz Bronson. At that time I was fully in love with my Nomad… but during Interbike of that same year we all noticed the plethora of shiny new 27.’s. Well, I had to have one. So a few weeks after that I put in an order for my very own Bronson.

When I purchased the Bronson I ordered the XO1 version without the Enve upgrade. It was kinda hard to justify to the wife shelling out enough cash for a good, used Lexus all at once for a mountain bike. But I went into it knowing full well that I’d be upgrading it and changing parts around. 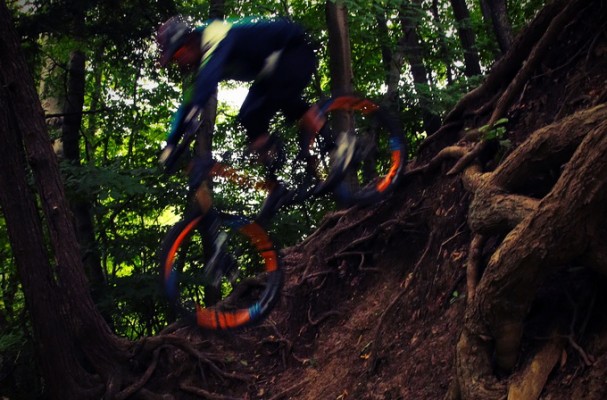 I agree with everything that Greg said about the Bronson… more or less. Since I’m a bigger guy than him, I noticed a few differences in the ride, which makes sense as valving will work differently for different weight riders. I agree that yes ,a pedal strike or two will happen, especially on longer, rougher rock gardens when speed tends to bleed away.

The bike does feel nimble, lively, and playful due to the lower center of gravity. I enjoy the upsized wheels as compared to my 26″ Nomad. On some steep, rocky descents I found the bike felt more stable and less likely to fall into trouble.

Overall, I think the bike is a winner! And as much as I enjoyed the Bronson out of the box, I felt like it could be tweaked to run that much better.

I tend to enjoy natural trails more than groomed trails. The Bronson does well at tackling these, but (yes, there is a “but”) I did find that in some tighter/steeper situations I had some issues. For one thing, tighter, technical rides tended to work the rear shock harder. I found that I had a hard time getting the settings right: it was either too soft or too hard, one way or the other, with apparently no happy medium. So I had an idea: make a super Bronson with all the parts that I already love! You’ve probably read about some of these parts here on the Singletracks blog, but here’s a comprehensive list of the changes I made:

Yeah, I may have gone a bit overboard in my upgrades… but what a change! 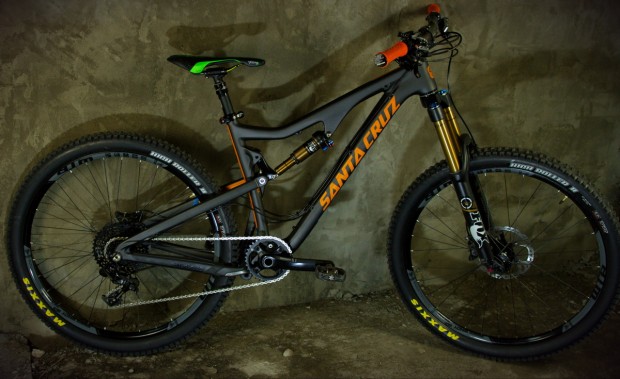 The bike started out looking like it did in the photo above. The photo below is the finished product with all of my changes: 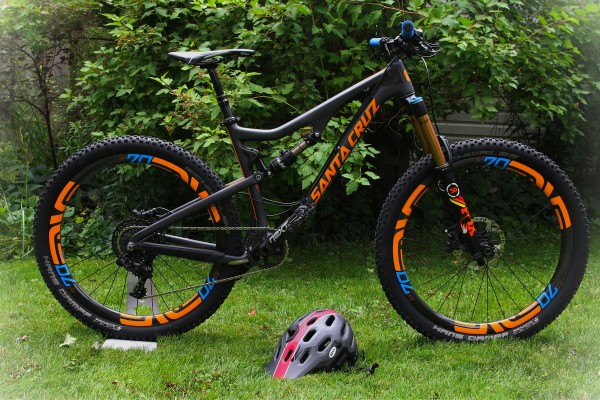 It was a dramatic change, with so many different components and parts. The improved cockpit with the wider bar and shorter stem puts me in a riding position that I enjoy more. The Half Nelson grips are one of the thinnest on the market. To me that was a huge change. I greatly appreciate the tighter wrap of my fingers around the bar, which really allows for less grip tension.

And the change in front and rear suspension is nothing short of amazing! 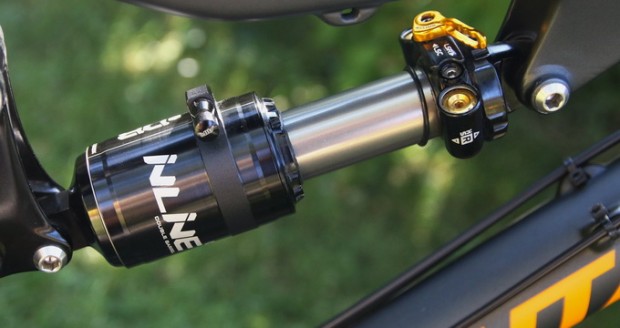 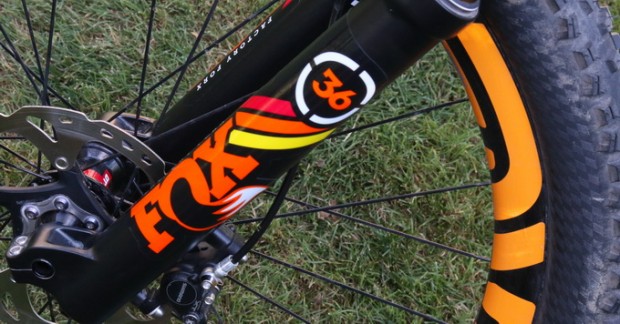 Both the DBinline and the new Fox 36 are exactly what I am after in suspension: semi-plush feeling, yet total control over every root and rock. Over the bigger obstacles there’s no harsh bottoming out. Extended rooty trails are not a worry at all: the bike just goes where you want it to.

The ENVE wheel upgrade made a huge difference… be sure to read my full ENVE review for more information. While initially I was hesitant about spending the money for the upgrade I now have to admit that yes, ENVE is worth the upgrade cost when purchasing a new Bronson.

I feel a bit funny when I talk about upgrades on bikes. It’s always best to get the bike you really want right off the bat… but sometimes that’s not possible. That said, I noticed on the build spec this year for the new 2015 Bronson XX1 that Santa Cruz is including a Next SL crank, and the Fox 36 as a choice for the fork. Huh… go figure. 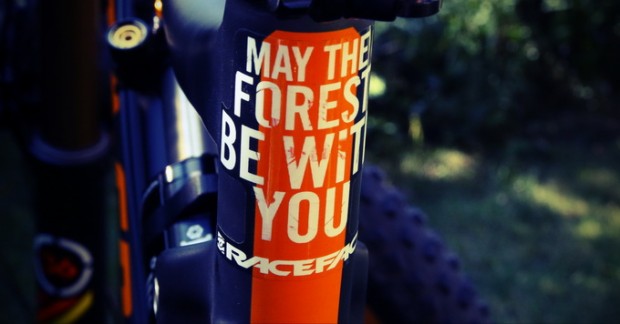 Long story short, I’m loving life with my Santa Cruz Bronson. It’s one of my favorite rides, and is pretty much my go-to bike for everything now.

And yes, May the Forest be with you, too.

So, I have demo’d a Bronson a couple of times and seems like I have had the same issue as you. If I set the rear shock up to descend well it bobs when I climb, and if I set it up to climb well the shock is too stiff while descending. Did the DB Inline solve that issue for you.

Hi there. Yes there is a huge difference in the performance between the two shocks. Totally worth the upgrade. Although I like Fox and they do produce good product, the DBinline here just dramatically improves the ride.

Nice review.
I picked one up about a year ago and love it. Wheels were my first upgrade as well. Went with a set of Stan’s ZTR ARCH EX with Conti X King tires for here in Moab. I liked the bike with the WTB wheels but holy smokes- I really like it now.
I have no issues with the Fox suspension at all so will leave that alone for now. I’ll find a linker two and post on the fb page…

What a “beaut”!!!!!!!!!!!!!!!! I’ve been thinking about a Bronson too. Thanks for the tips on the upgrade, especially the rear shock. I might be able to find a used bike cheap enough to do some substantial upgrading. VERY COOL bike.

Why the DB inline instead of the DB Air?

Hi Casey..The DB inline is lighter (for one). For bikes like the Bronson with the shorter stroke on the shock, their is no need for a separate reservoir, inside the head of the shock, the oil surge is taken care of with a membrane..

Was there anything tricky about installing the Next SLs? Did you use a Race Face BB, if so, how has it held up?

Beauty of a bike!

Nothing tricky on installing the Next SL cranks.. You do need the specific BB and tool for it as the axle diameter is much bigger than previous models.

I had no issues with the new bottom brackets, and that is all I run on my bikes.

Nice review. The new Brony is in the running for me for a possible new rig. It seems to check off the boxes I am in search of being a fun capable descender combined with excellent climbing manners and a usable water bottle mount. I fancy myself as being a good (excellent 2 crazy?) descender and ride a bike currently that excels in this. I demoed the Nomad 3 and was not blown away by it’s climbing abilities, but more recently was very impressed by the Hightower. It was a much better pedaler than the N3 and the Bronson 2 seems to possess those traits in a smaller wheel package. Other possibilities for me are the Evil Insurgent (fantastic pedaler, no bottle mount), ’17 Banshee Rune (my current rig is a ’14 Rune and it has ruled, but something lighter and more spritely might be nice IF it doesn’t give up too much on the descents), and the Evil Calling (again killer pedaler, bottle mount, but less travel than I want ideally). First world problems, sigh.