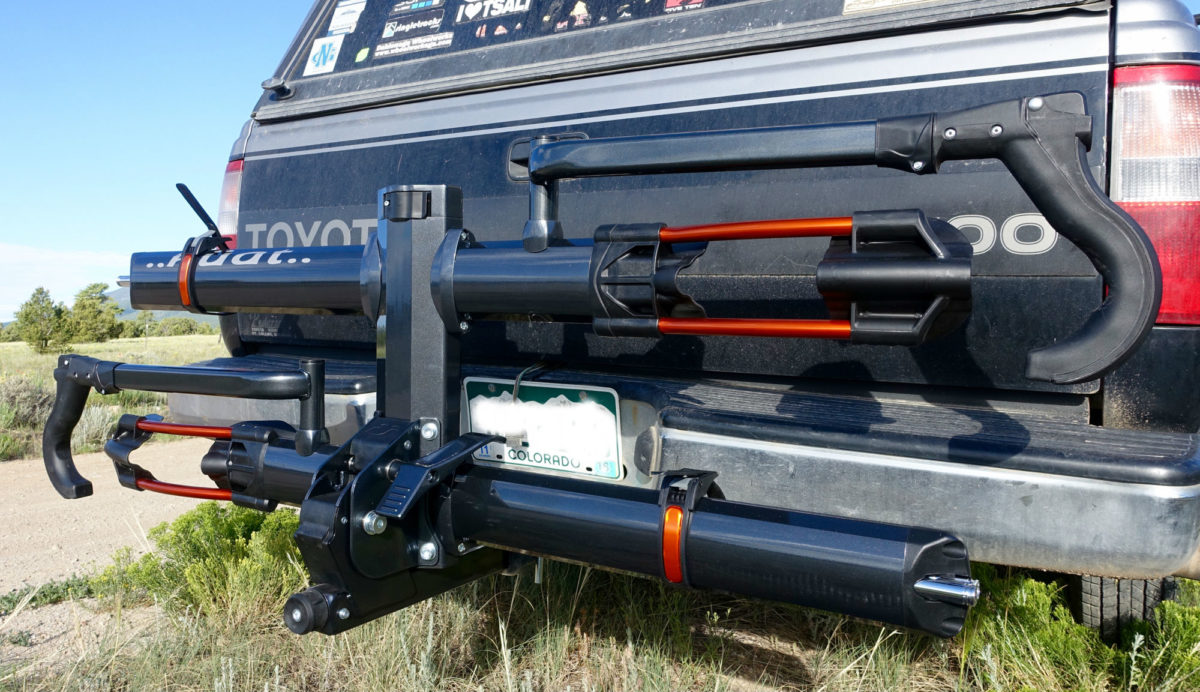 When is a bike rack something more than just a bike rack? When is it an accessory, an upgrade, an adornment for your vehicle? I never asked myself this question before adding a Kuat rack to my vehicle.The Kuat NV 2.0 is the second edition of one of Kuat’s most popular racks. If you are familiar with the original NV, here’s how Kuat characterizes the changes:

”. . .we overhauled every feature and streamlined the look while maintaining the spirit of its predecessor. A re-designed pivot system with foot assist, will endure a lifetime of abuse. Adjustable cradles allow for fast bike fit adjustments. Individual bike cable locks are longer, more durable, and easier to use. Holds bikes with up to 4.8” tires [ensuring] a true fit for any bike in your stable. Updated ratchet arm creates intuitive release and a more stable tow. The ground up re-design of the Trail Doc work stand delivers a pro level feel. These are only the highlights, resulting from 3 years of extensive development, making the NV 2.0 the most advanced hitch rack on the planet.”

Personally, this was my first experience with Kuat, so I’m taking my analysis of the NV 2.0 from the very top.

Out of the box the assembly of the NV 2.0 (NV for short) was simple and easily achieved with the included tools and instructions. Slide it in the hitch, add the locking pin, tighten the dial, and it’s time to load bikes!

Over the course of my lengthy review lasting the better part of a year, I loaded bikes of every imaginable type and wheel size on this rack—everything from skinny-tired, road bikes all the way up to the 4.8” fat bike tires mentioned above. The adjustable front wheel clamp quickly and easily locked down on any wheel and tire combination, including plus, fat, standard—you name it. You get it.

The only catch with loading fat bikes on the rack is that the included ratchet strap for the rear tire isn’t long enough to wrap around the large volume of a 26×4.8” tire. It is long enough for plus tires (27.5×2.8” Rekons tested), but for a true fat bike, I had to use a bungee cord to keep the rear wheel in place. This was an easy fix—just slide the ratchet strap out of the way of the wheel, throw a bungee through the spokes and around the tray, and you’re good to go! Compatibility at the ratchet for full fat, right out of the box, would have been a nice touch. However, you can purchase Kuat’s Phat Bike Kit with a longer ratchet strap for $10 per ratchet.

Once I added the bungee, the fat bikes stayed secure. Indeed, overall I was highly impressed with how secure my bikes rode on the NV. Even over the course of a couple of 1,500-mile road trips across the nation I had to do zero fiddling or adjusting with the front tire clamp. Some rack systems have a tendency to loosen up due to road vibrations, but that’s a non-issue with the NV.

After security, the second question that any rack has to answer is: “how well does it protect the bike?” Some clamping systems contact the frame, and I was curious to see how the Kuat NV 2.0 would operate. The front wheel clamp comes down directly on top of the tire, and if you push into the tire hard enough you can keep the front wheel pretty secure without touching anything but the tire. But the heavier the bike, the less secure just using the tire is. For a secure fit, you’ll want to touch the clamp arm against the fork arch and the tire.

At first I was worried that this would cause damage to the fork arch, but I found that the clamping surface of the arm is made of a very soft rubber material that is designed to wear out before it wears your expensive bike. I still tried to avoid having these two surfaces touch in order to keep the rack clamp from wearing, but if something on the Kuat NV 2.0 rack itself does wear out, you can find replacement parts for just about every portion of the rack on Kuat’s website.

However, one of the times when I actually needed to use this in real life, I found the angle required for the allen key to be an absolute pain. Even once I got the bolt loose, what looked like a significant amount of adjustment on the showroom floor turned out to be pretty negligible in real life. You truly only get a couple centimeters of adjustment each way (if that), which many times is not nearly enough. In one situation, we just ended up pulling the seatpost.

One other time, even a 100mm dropper post’s worth of adjustment wasn’t enough to prevent contact due to the combined height of the bar+controls vs. the height of the saddle. If 10cm of adjustment from a dropper isn’t always enough, the minimal adjustment in the tray will, I think, rarely be enough to resolve the bike-on-bike issue if it does occur. So while Kuat touts this as a notable feature, I personally don’t think this should be considered as an advantage of this rack.

The other type of security that a quality bike rack should offer is against thieves, and I found the included cable locks an excellent touch. While these won’t be enough to stop a determined thief, they will be enough to deter the opportunistic passerby. If you’re leaving your bike locked on the rack overnight, adding a more secure lock is advisable.

In their paragraph of updates above, Kuat noted the improved hinge and improved work stand. While I can’t compare to the previous model, I found the hinge to be easy to use, very durable, and confidence-inspiring, even with two heavy bikes loaded on the rack. The foot actuation is a great touch, especially when you’re trying to avoid getting too dirty.

I found that I didn’t use the work stand very often, but in the couple of instances when I was on a road trip and I really needed to have a stand to do bike work, it was an absolute godsend! While of course you can always throw a complete stand into the back of your vehicle, the Kuat system reduces the amount of gear you need to haul.

The final notable feature of the Kuat NV 2.0 is its aesthetic appeal. While I didn’t consider this when I first received the bike rack, as I began comparing the look of the NV to more utilitarian models from Yakima, Thule, and even lower-end models in the Kuat line, I began to appreciate how sleek, refined, and modern the NV 2.0 looked on the back of my vehicle when not in use. While generally aesthetics aren’t a big make-or-break point for any product I own, I could easily see a rider with a nice, new vehicle not wanting to put a clunky, black, angular rack on the back of it. The smooth curves and glossy paint of the NV 2.0 are both subtle and complementary when paired with a vehicle, yet stand out as stylish from the masses of bike racks on the market today.

Progression
Sizing Up or Down Plus Handlebar Widths and Crankarm Lengths:...
Gear
These MTB Deals are Fire, including 40% off Patagonia Dirt...
Gear
The Maxxis Minion DHF Tire is Still the One to...
Gear
Never Underestimate the Power of a Good Zip-tie
Subscribe
Login
Please login to comment
4 Comments
Most Voted
Newest Oldest
Inline Feedbacks
View all comments

How about an article about transporting bikes in a rack log distance (across the USA)? What is the effect on the suspension bouncing for 5000 miles? Should shocks be locked out? Any other protection or maintenance that needs to be taken into consideration? Elevation changes and tire/shock pressures? It seems like you have some experience in this area.

Hmm that’s a good idea, I’ll add it to the list. However, I don’t think it’s ultimately that complicated. Things to be aware of:
1) Rain and salt from the road is my biggest concern when driving long distance. Try to time your drive when it’s dry but if it’s wet, if you can’t get the bikes in the vehicle, you’re sorta screwed. Best thing to do in that situation is to wash, dry, and lube them as soon as you arrive. I try to cover the delicate bits, but generally those efforts don’t seem to pay off.
2) Try to avoid anything touching the frame or any part of the bicycle itself, as that will rub over the long haul. This is where a high quality rack like the NV 2.0 comes into play.
3) Regarding elevation changes, bring a shock pump and tape measure and check your SAG when you arrive.
4) Other than that, not much to be concerned about besides locking your bikes.

Did this two years ago moving 2k miles from sea level to beyond mile high. Just loaded the bikes up and took off. Scalpel Team and Trigger 1. No issues with air pressure or anything else.

Thanks for a great review, Greg. I just purchased a new NV 2.0, but haven’t gotten it out of the box yet. Glad to know I’ve made a good purchase. Not sure if the included Phat Bike Kit is in the box with mine yet, but I’ll definitely be registering to get that accessory. Thanks for including that detailed info.

I’m assuming the locks share one key, but if you add the extension to make it a 4-bike rack, can you get the same key for all 4 locks? Anyone know?