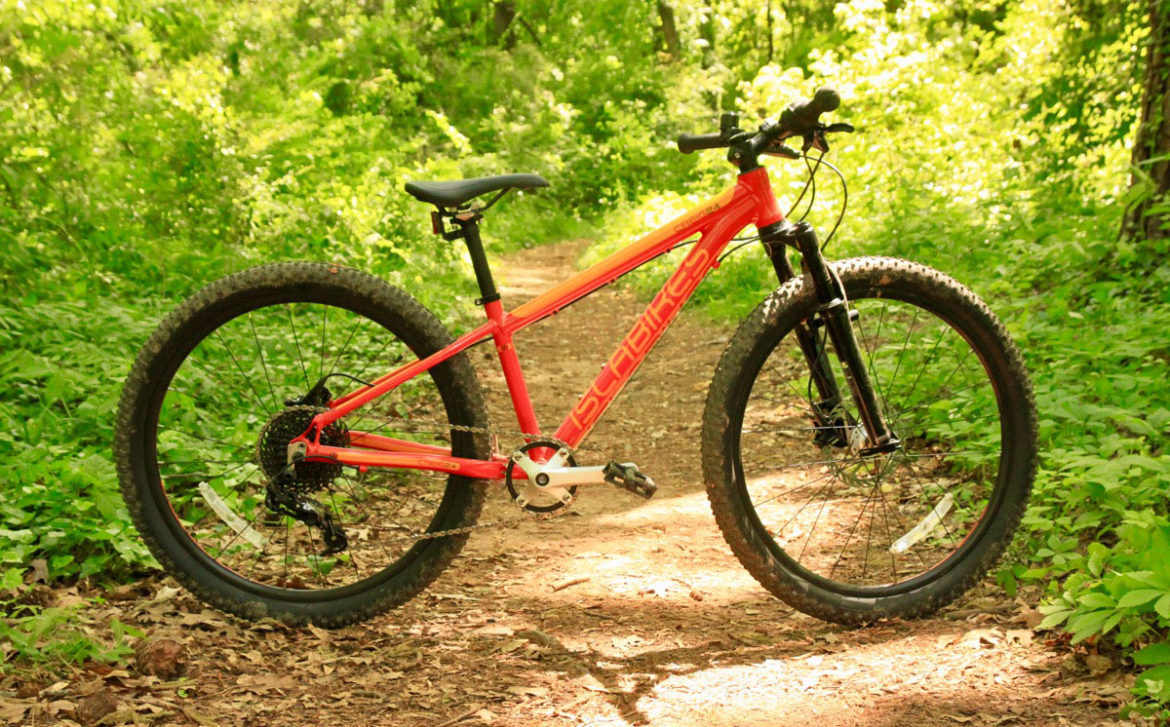 The Creig 24 from Islabikes is a high-quality, lightweight kids mountain bike designed for riders 8-years-old and up. With a smart spec and simple design, the Creig 24 makes mountain biking fun and accessible for kids, while minimizing adult frustration. 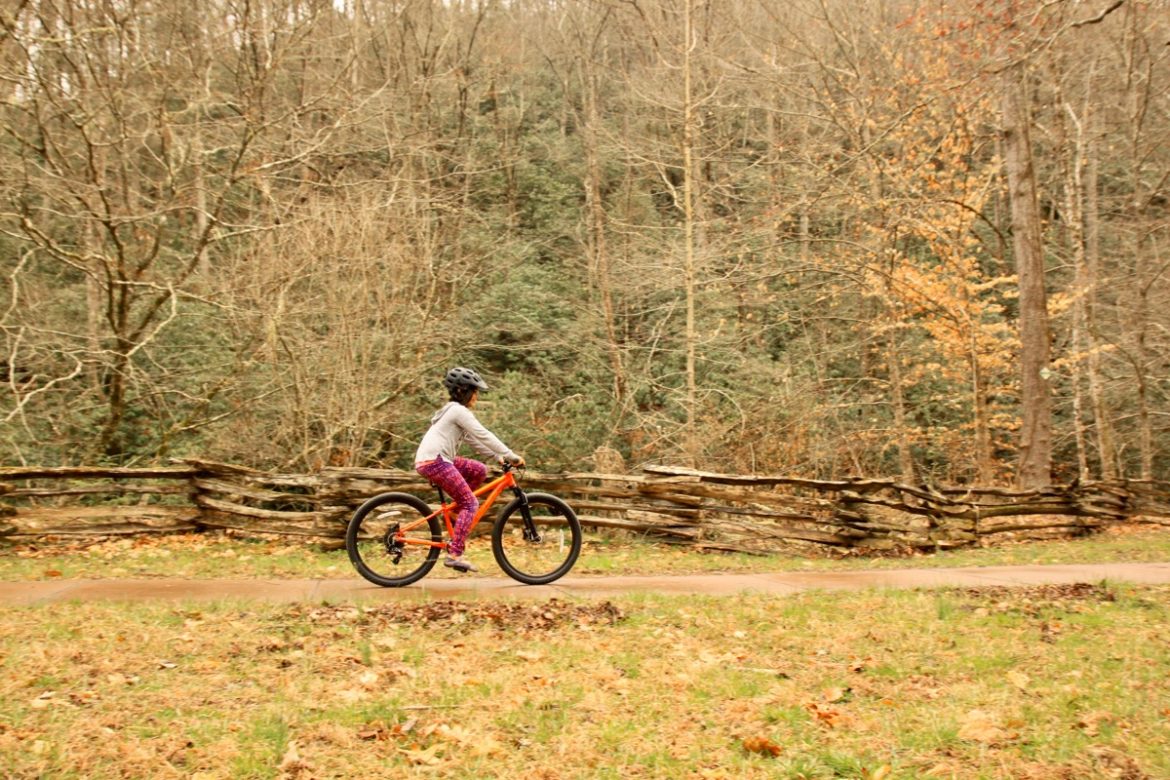 Maybe it’s just me, but choosing bikes for my kids is difficult. They’re constantly growing which makes sizes a moving target, and at the same time their skills are progressing. Throw in the fact that kids use their bikes for everything from riding trails to commuting to school, and it’s no wonder many parents just settle for whatever is on the floor at Walmart. But as many of us have found, department store bikes are rarely satisfying. 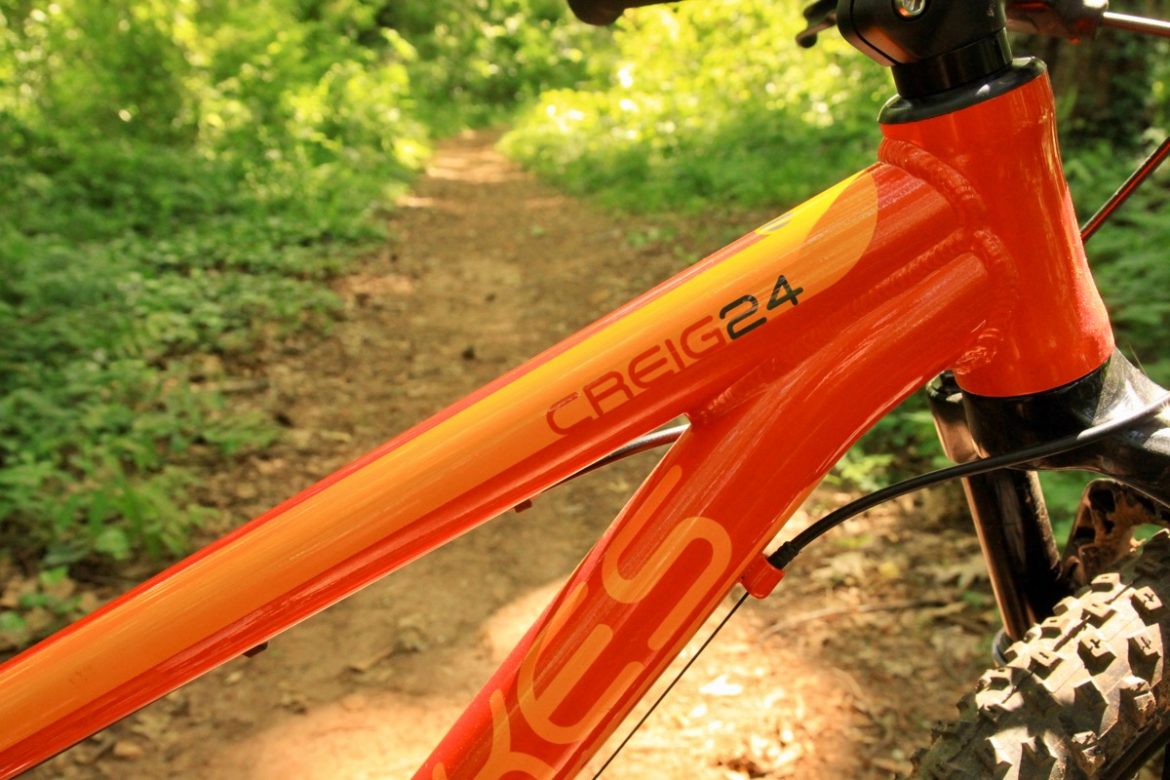 Islabikes offers the Creig mountain bike in two sizes: 24″ and 26″. A two-inch difference in wheel diameter doesn’t seem like a lot, so Islabikes further differentiates the two models by recommending the Creig 24 for riders 8 years old and up, and the Creig 26 for riders 9+.  Of course longtime mountain bikers will recognize ye olde 26er wheels from the days of yore, when that was the standard wheel size for adult mountain bikes as well.

Bike sizing is a big deal for adults, and it is for kids as well. According to Islabikes, “with the correct size bike, your child will develop their cycling skills quickly, easily, and safely while being more comfortable on their bike.” With that in mind, in addition to providing a rough age range for each bike, Islabikes also sets minimum and maximum height and inseam measurements for each bike.

The Creig 24 features a 7005-series aluminum frame with tube sizes that appear to be scaled appropriately for the small frame. All of the Islabikes models feature a similar red-orange paint scheme which is good branding, but it’s also gender-neutral, and prevents certain arguments before they even start. 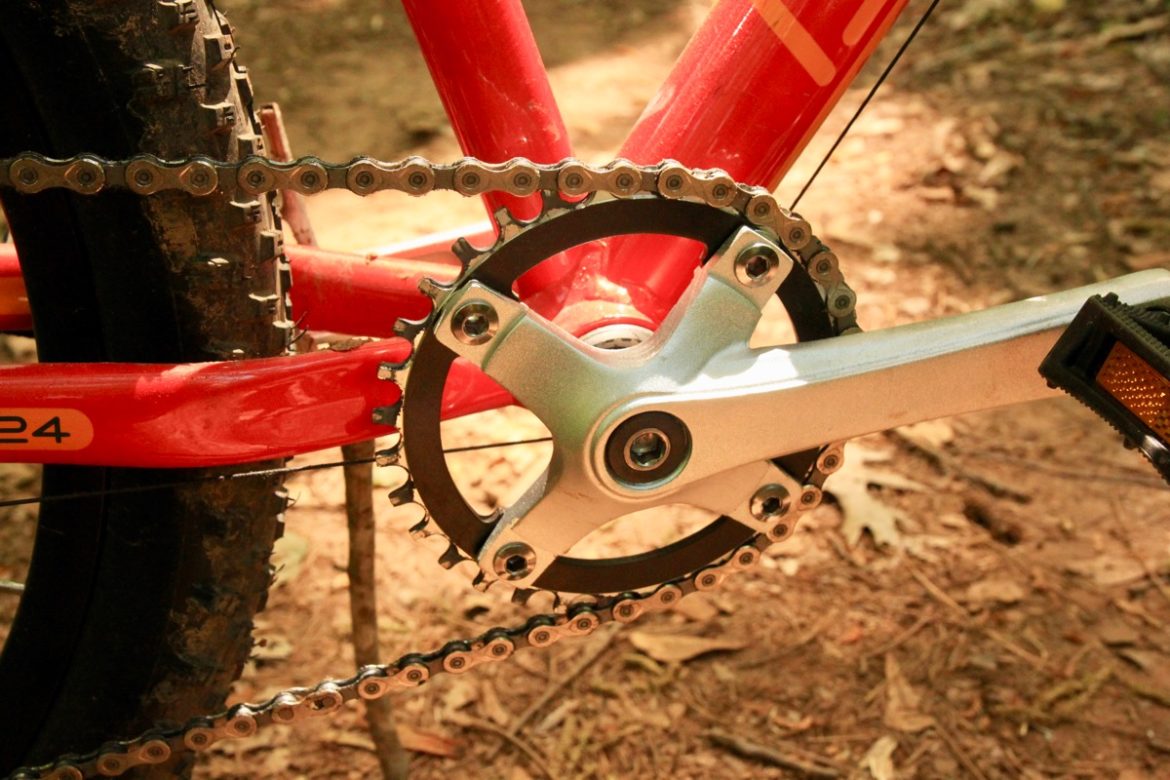 Sizing isn’t just about frame and wheel sizes. For example, the crank arms on the Creig 24 are 140mm long, while the Creig 26 crank arms are 152mm. Similarly, the handlebars go from 560mm wide to 580mm between the two models. Even the brake levers are modified to offer a shorter reach. 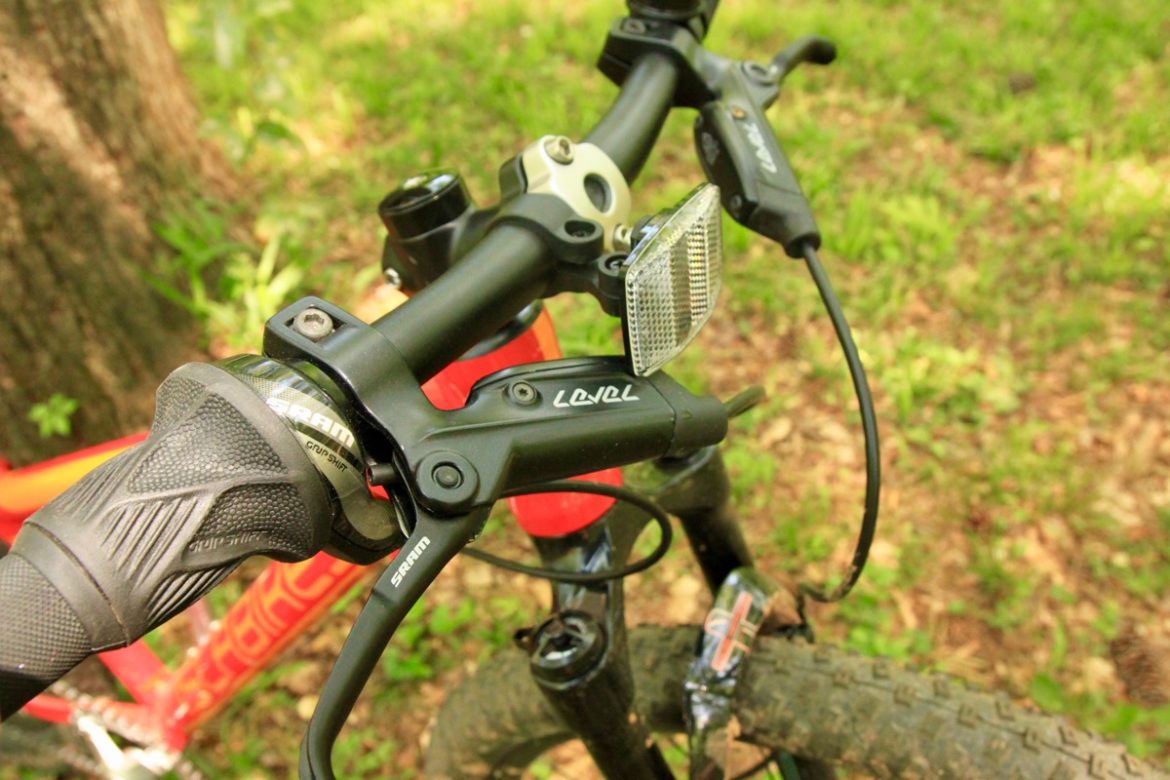 The Islabikes Creig 24 offers an impressive spec for a kids’ bike. As a dad who has to pay for this stuff, my first inclination is to skimp on kids’ bike parts, but there are two things I’ve learned.

That last part is the key. As mountain biking parents, most of us want to introduce our kids to the sport so they can participate with us, but it’s a delicate dance. Many kids are just one bad experience away from saying they never want to ride a mountain bike again. A solid component mix reduces the risk of a bad ride. 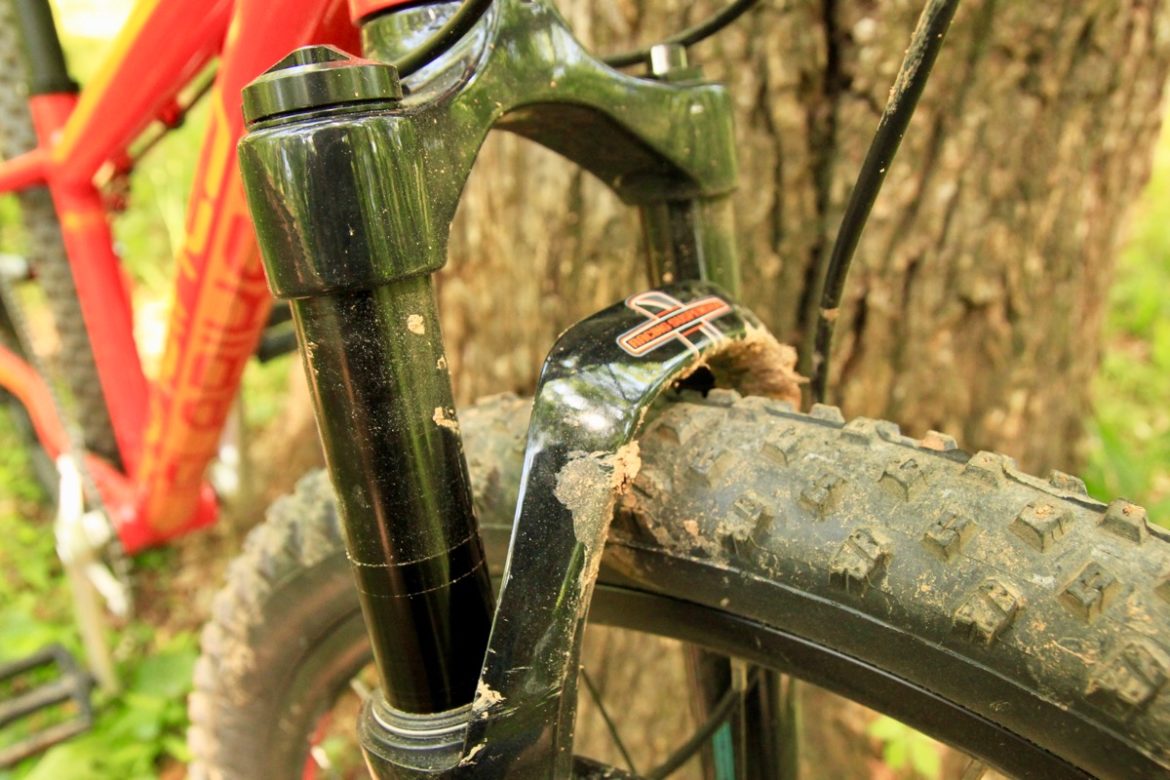 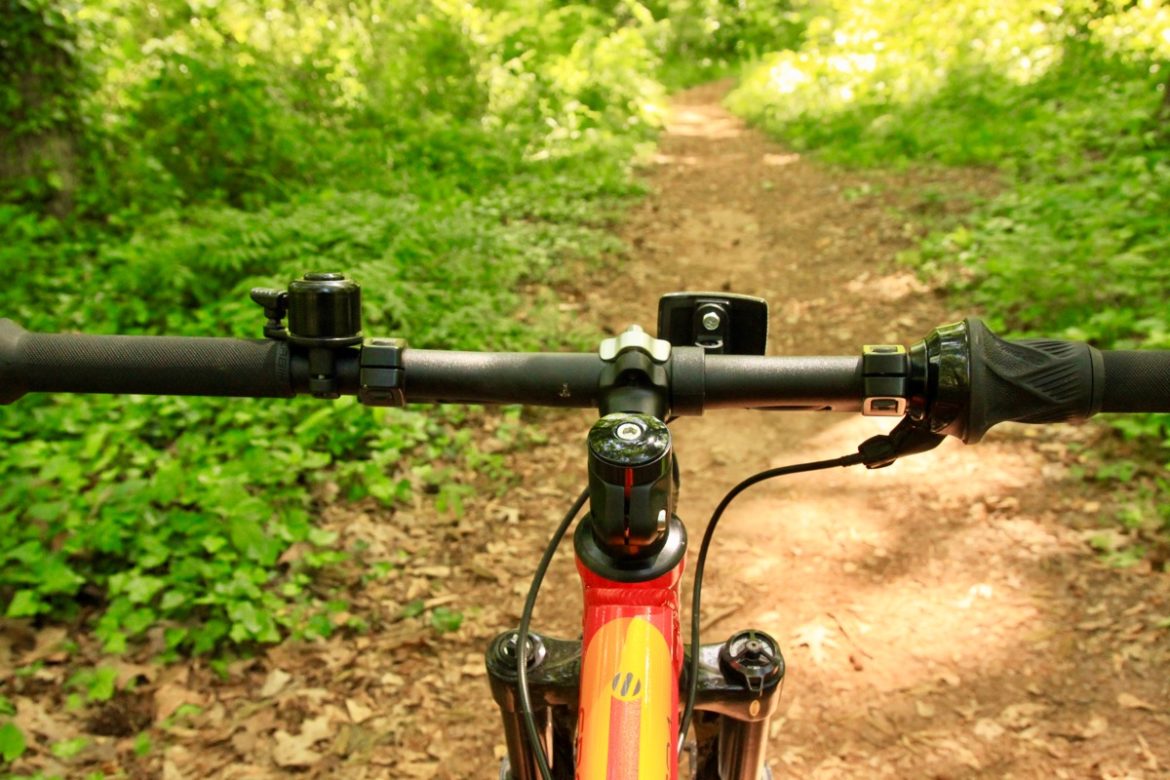 Starting at the front of the bike, Islabikes specs an RST F1RST 24 air-sprung suspension fork with 60mm of travel (the Creig 26 bumps the travel up to 80mm). While this is no RockShox or Fox fork, it does offer a lockout and external rebound adjustment. An aluminum bar and stem pull the cockpit together, and the Creig 24 features SRAM Level hydraulic disc brakes with a 160mm rotor up front and a 140mm rotor in the rear. 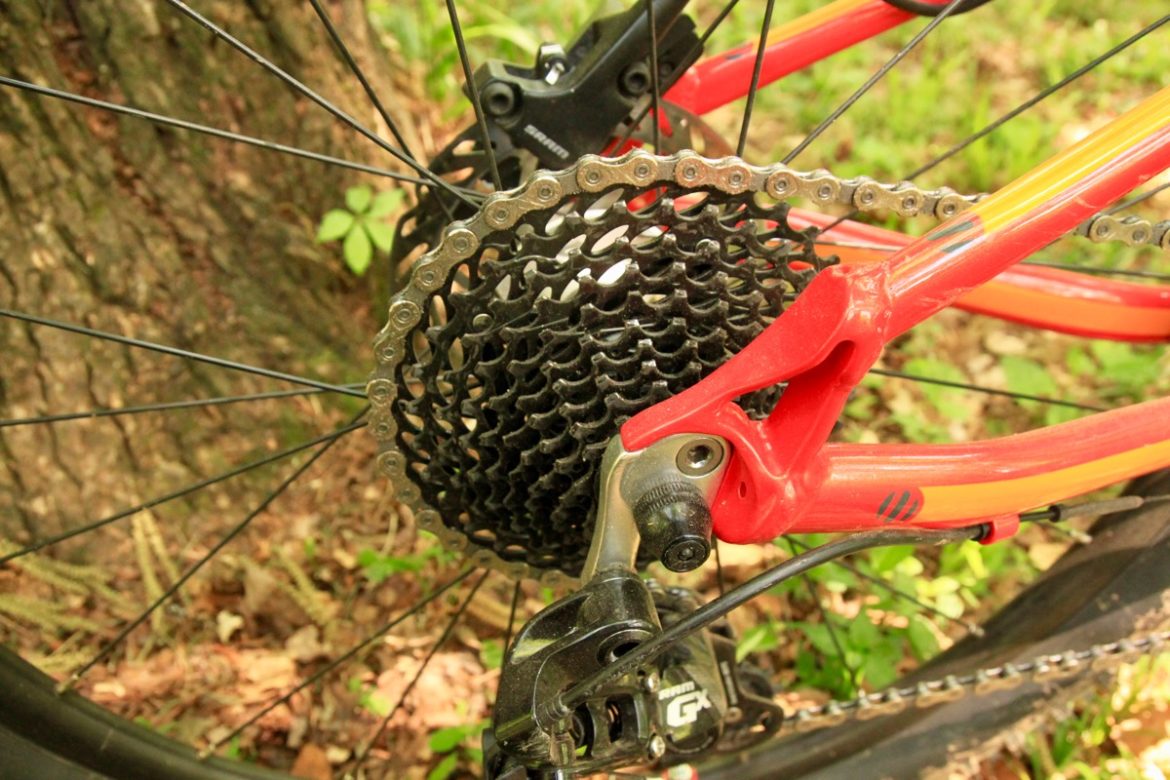 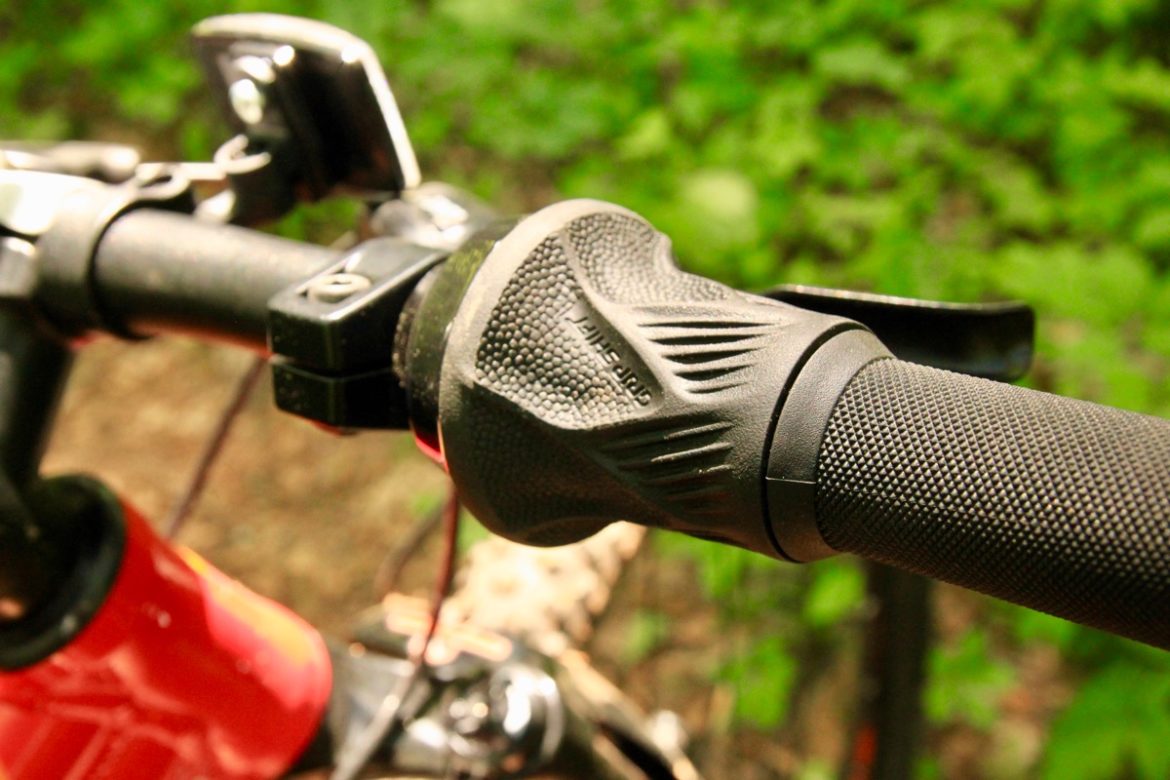 The drivetrain is a key component on any bike, especially for young riders still developing their fitness. Not only that, the concept of shifting can be difficult to grasp. Islabikes specs a 1×10 drivetrain with a 32T crank and an 11-36 cassette, which is essentially the same gear range many adult bikes use. Based on my daughter’s test rides, she might prefer a 30T chainring up front to make steep ups a bit more manageable.  A SRAM grip-shifter controls the rear GX derailleur. 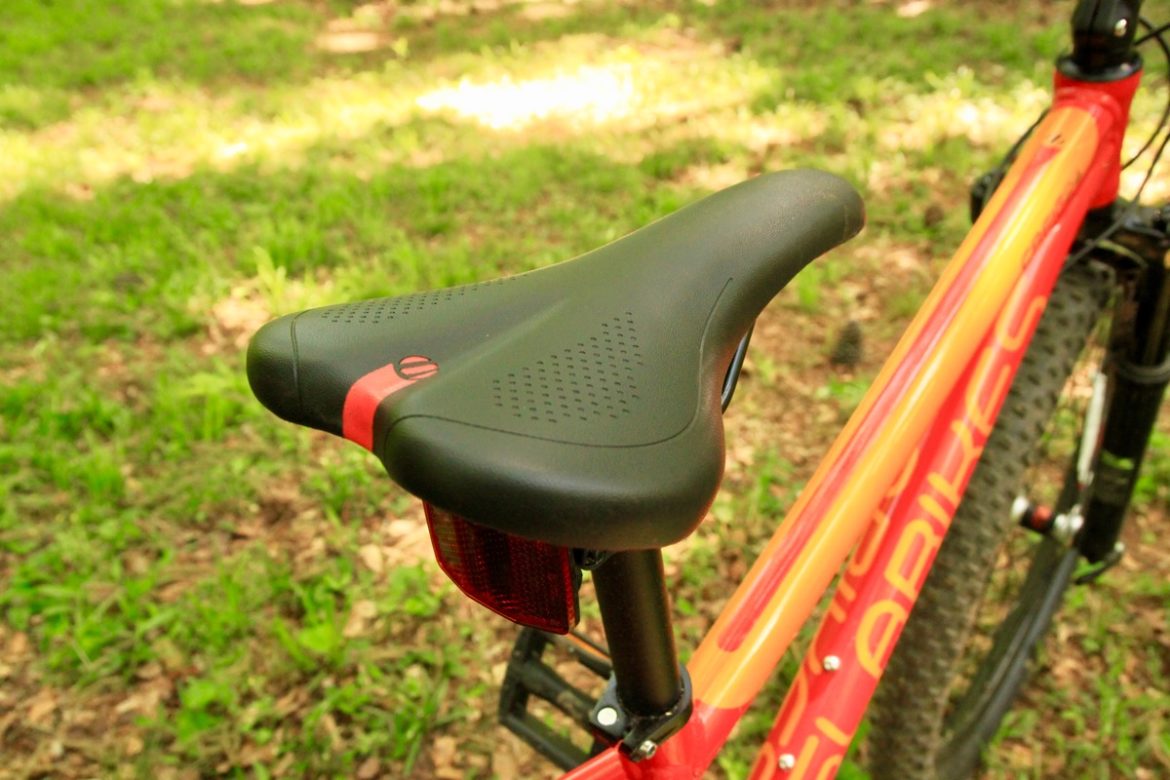 It seems kids’ mountain bikes often ship with under-gunned tires, but not the Islabikes Creig 24. The 2.25″ Vee Tire Crown GEM tires are good all-rounders and are confidence-inspiring. Double-walled aluminum rims keep the wheels fairly lightweight, and the Islabikes-branded saddle seems like a good choice. There’s even a bell thrown in for good measure. 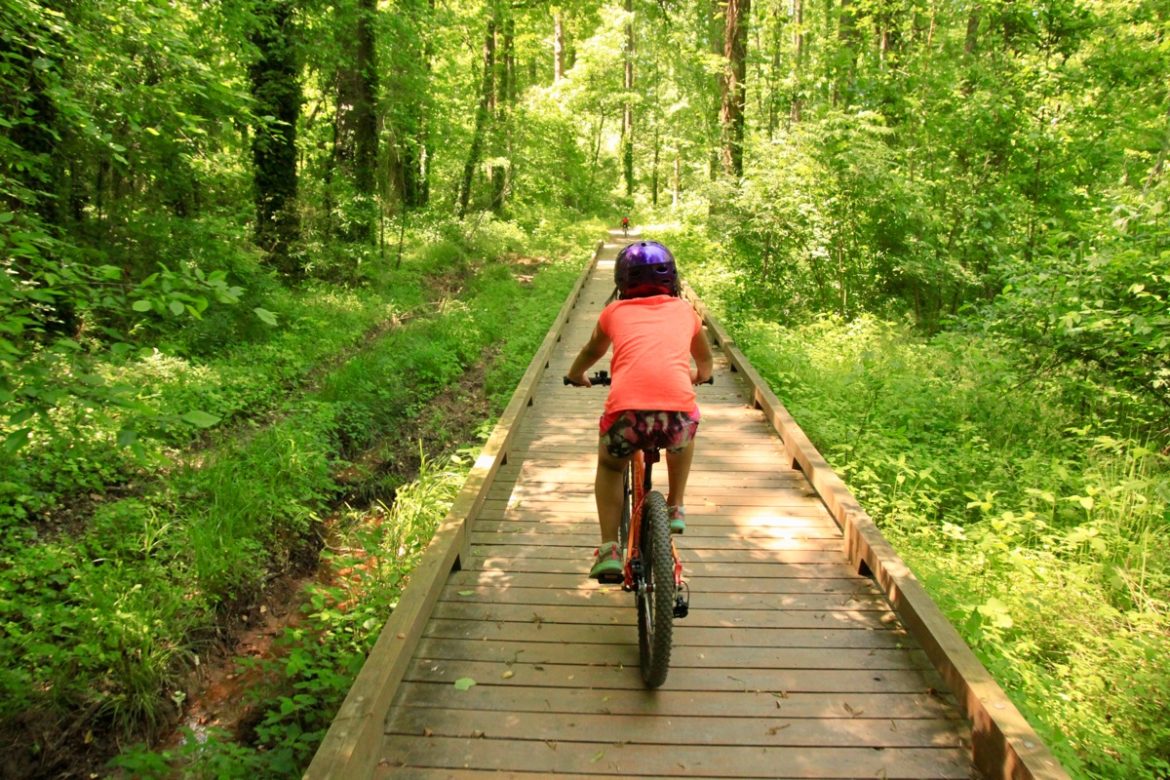 The component spec leads to a light overall weight for the Creig 24 — just north of 23 lbs. with pedals. The light weight allowed my daughter to confidently climb hills but it also seemed to make handling much easier. Maneuvering the Creig 24 through twisty singletrack wasn’t a chore, and getting the bike up and over roots and rocks was never a problem. Admittedly there were times when I suggested choosing a line to avoid an obstacle, but it wasn’t necessary. My daughter — and the Creig — just popped right over and kept rolling.

Balance is one of the first things kids learn for biking, but riding a narrow, loose trail adds a whole new dimension. Thanks to the real, 2.25″ mountain bike tires on the Creig 24, keeping the bike upright was a cinch. Honestly there weren’t a lot of rowdy descents happening during this test; most began with a tentative and gradual release of the brakes. I must say the hydraulic brakes were confidence-inspiring, even if they were overused a bit. 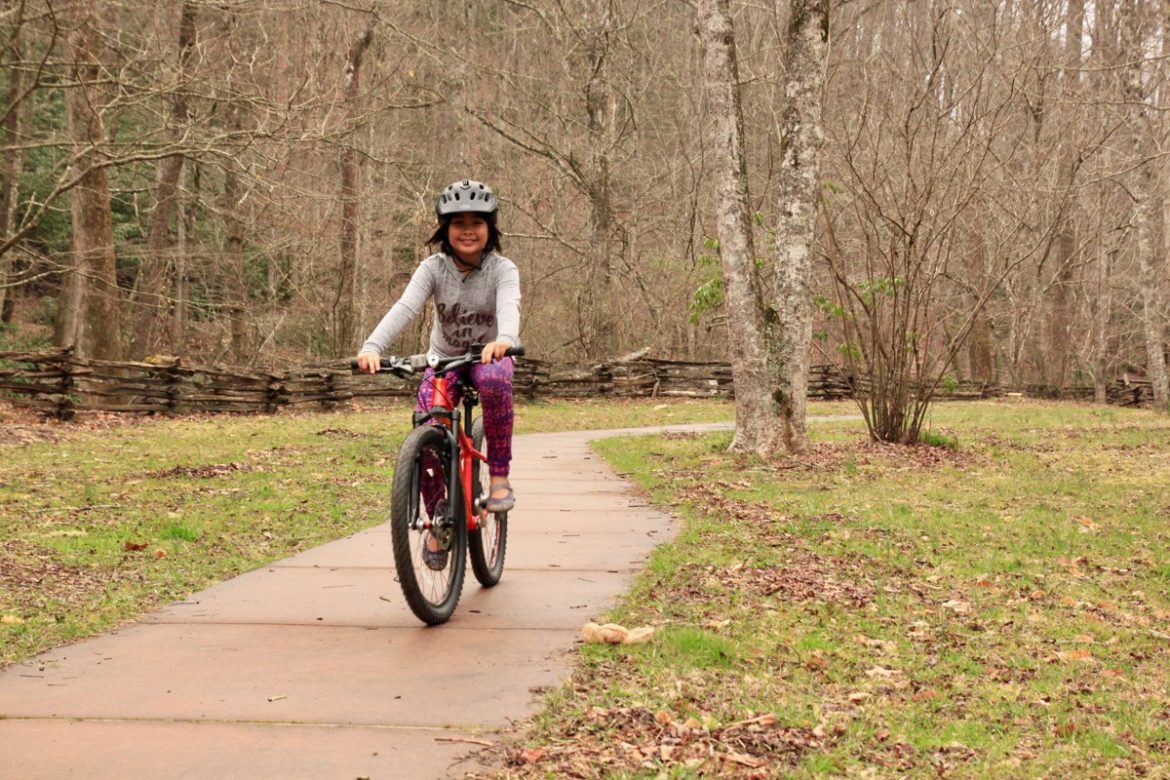 Perhaps the best endorsement of the Creig 24 is that it made my daughter, who has been reluctant to dive into mountain biking, want to ride more. While she’s still focused mostly on cruising to the park, the mountain bike seed has been planted, and the Creig 24 has given her confidence in her ability to dip onto a singletrack trail whenever she feels like it. And that’s what progression is all about.

Thanks to Islabikes for providing the Creig 24 for review.

Gear
Our Most Popular MTB Product Reviews of the Year
Gear
The Marin El Roy Hardtail is Very Slack, But it's...
Gear
These Bikes are Lightweight, Affordable, and Made for HS Mountain...
Community
Kate Leeming on Exploring the Planet by Mountain Bike
Subscribe
Login
Please login to comment
1 Comment
Most Voted
Newest Oldest
Inline Feedbacks
View all comments

This review was super helpful to me as I think ahead a few months to my daughter’s next bike. I’ve been on the fence between the regular and pro creig models, and think this pushed me over to the pro side. My daughter is *very* tall and slender… at 6.5 years old, she’s 50″ tall and 41-42#. I’m realizing just how important going with the lightest weight bike possible really is for her. She’s been on a beinn 20 (that we immediately put blackjack trail tires on) for over a year and, now that she insists on riding single track almost exclusively, I’m seeing how even a 17ish# bike probably feels heavy to her riding on trails with anything over gentle climbs and descents. To have the same bike to body weight ratio, I’d be on a 65# bike… which sounds kind of terrifying. I’ve got to hand it to her, though… she rides pretty aggressively and can climb up anything I can. I guess that brings me to my next point. I’m not really a mountain biker. Neither is my husband. I tried to pick up the sport in my early 20s living in Colorado over a decade ago, but my lungs and legs honestly just didn’t think it was any fun at all. My kid, on the other hand, is hooked. So here I am online researching new bikes (again) and (more recently) looking up single track trails within a reasonable driving distance. It originally felt crazy to go for the pricey pro model kids’ bike while I’m still riding on an ancient, hardtail, 26″ gary fisher bike, but when I consider the variables of her body type, her ability, and her passion it suddenly is starting to make a lot of sense. It seems most of the parents who spring for these bikes are avid riders themselves who hope to encourage their kids to keep up, but I’m on the other side of the coin. My kid is constantly begging to go ride new trails, or to go ride her favorites over and over again… and that kind of passion seems like it deserves to be indulged. All that said, now I’ll just have to figure out what kind of pedals to put on the thing since most of the folks who buy one likely already know that kind of stuff. Ha!