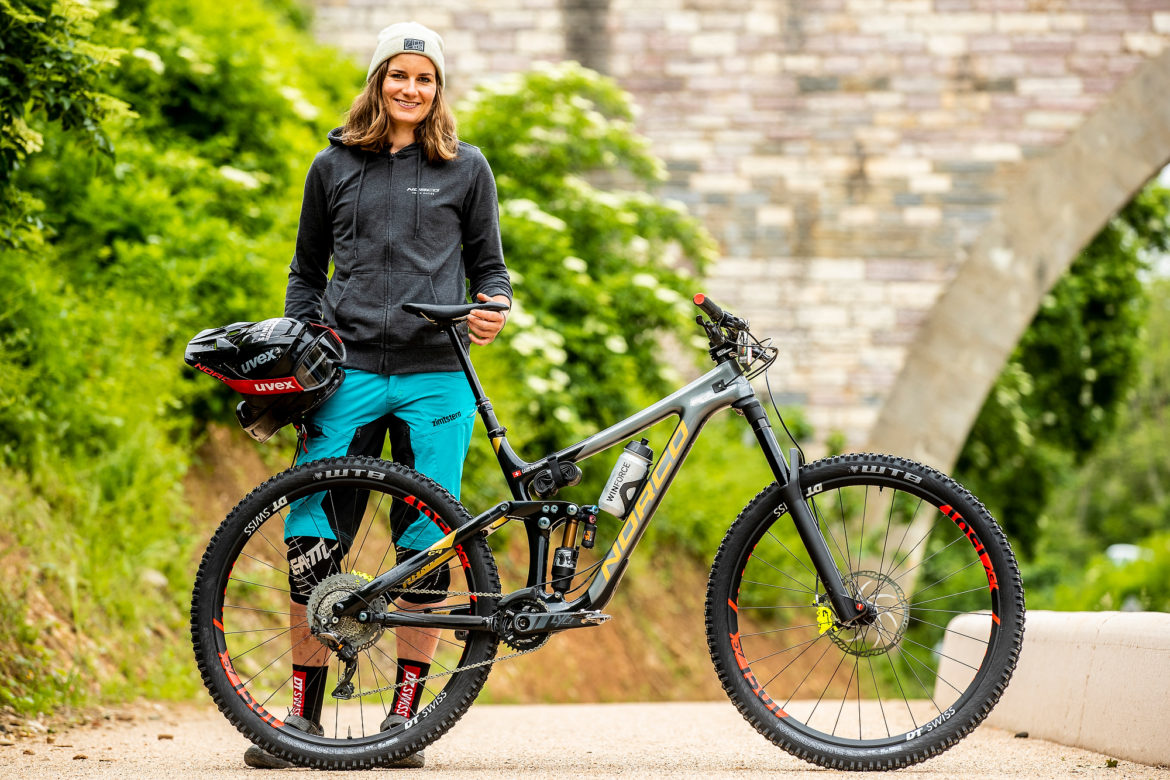 By now you have likely heard about the new DT Swiss F 535 One fork that has many suspension and design nerds talking. We wanted to share a unique take on the fork by interviewing Swiss professional gravity racer Caro Gehrig who has been testing the new fork for DT Swiss since February of this year.

First, a little background on Caro’s life between the tape is in order. Alongside her sister, Anita Gehrig, Caro began her racing career with downhill events in 2008 and has been focused on competitive gravity racing ever since. She has raced every season of the Enduro World Series since its inception. Her race results place her atop the elite-level EWS rankings, where she has finished only seconds off the podium on several occasions. 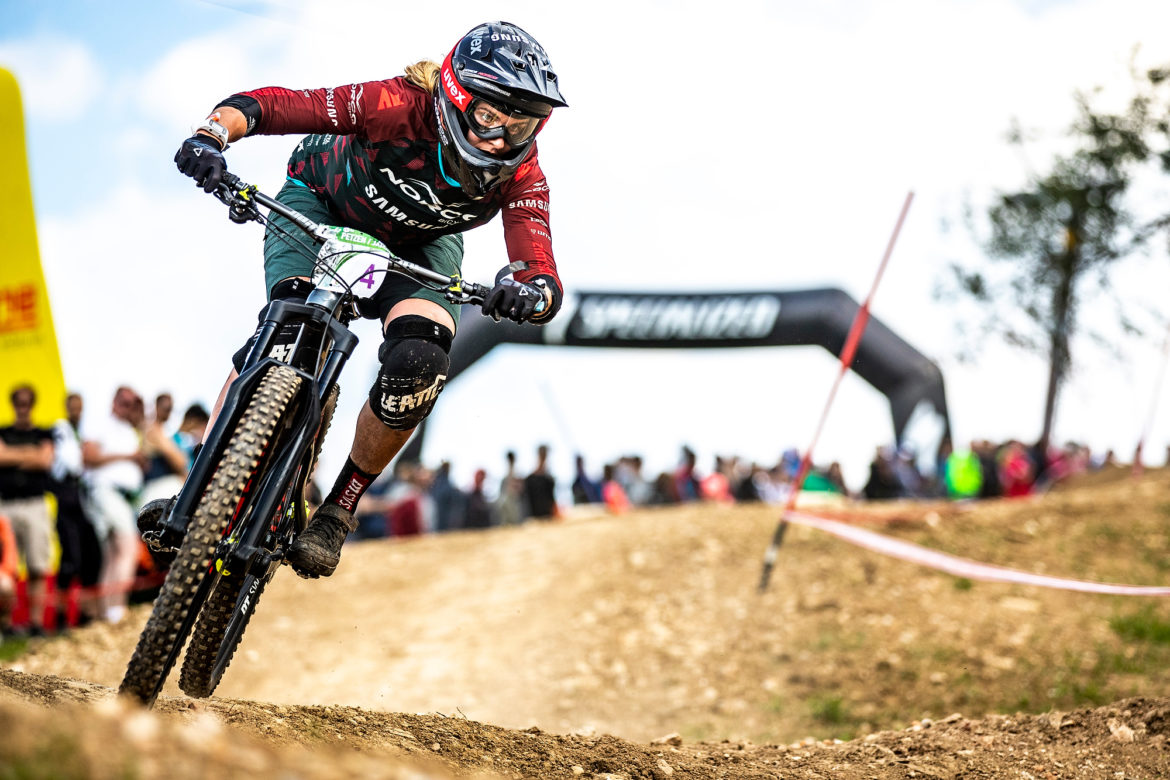 After round 3, Caro was sitting in 8th place overall in the EWS standings, experiencing some of the best racing of her career. An unfortunate crash, while training for round 3 of the DH World Cup series in Leogang, Austria, resulted in a pelvic-ring fracture. Today, just six weeks after that devastating dirt nap, Caro is regaining strength and getting time in the saddle with friends as they prepare for the steepest iteration of the EWS calendar in La Tuile, Italy. Caro will be riding easy for another week and hopes to compete in the Swiss National Downhill Championships on July 28th.

This season Caro and her sister are running a new race program called Twins Racing, and DT Swiss is on their long list of prestigious sponsors. I got a chance to chat with her about the new F 535 One fork, and she had only stoke to share about its performance. Check it out below.

How did you get started working with DT Swiss?

We (referring to herself and her sister) always wanted to work with them. We have a lot of good friends that work for the company, so it’s basically like family. When we started our own team this year DT Swiss was the first sponsor for us. Then we got on Norco bikes, which we are super excited about. Also, a good friend of ours is the one designing the fork, and he really rips on the bike. We thought, If he can ride it so can we! So DT sponsored us and we started testing the fork in February.

Which bikes have you tested the F 535 One fork on?

We ride the Norco Range C1 29er for enduro racing and the Site trail bike for training at home. The Range has a 160mm fork and 150mm rear travel. Our bikes are size large. I am so happy with my bike.

Have you also ridden the rear shock?

Just the fork for now. For EWS racing it’s better to have a piggyback shock. We ride the DT Swiss shock on our trail bikes at home, for training.

How would you compare the DT F 535 One to other forks you have ridden?

Last year we were on the Fox 36 and I have to say it feels very similar. The fork is super stiff, even rated for e-bike use, and you can really feel how stiff it is when you are pushing the bike. We had a Rockshox Pike on the bikes before, and it was really flexy. [The DT F 535] felt amazing as soon as we switched. It’s a good feeling to not having something flexing around on the front end.

Have you been able to provide feedback for DT Swiss that has affected design?

At first, they didn’t tell us about the internals or tech in the fork. We were just riding them and telling DT Swiss how it felt. The first tune wasn’t progressive enough for our bikes, but now it is perfect. They changed some things and it feels really good. 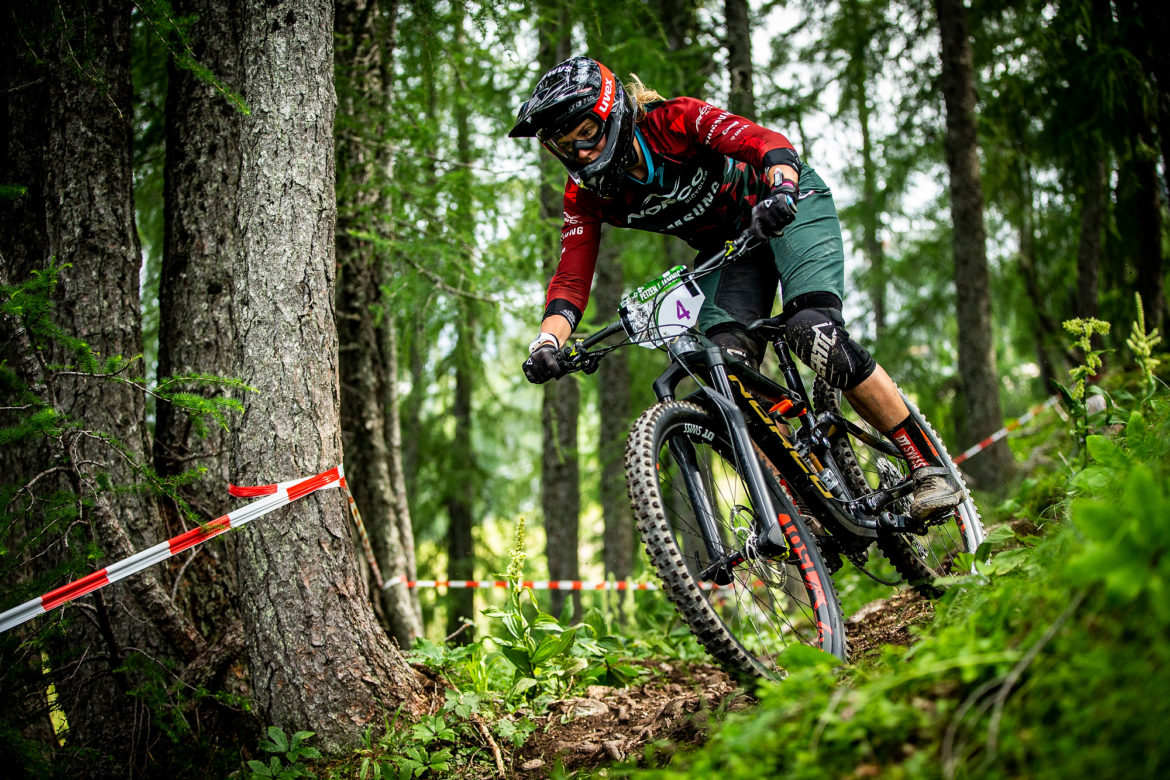 What is your favorite performance element of the fork?

Small bump compliance is huge. It is really noticeable when you are riding, it feels super smooth. Also, I think it’s quite convenient not to have too many adjustment knobs. For enduro, you don’t change much. […] I want my bike the way I always ride it. I want to know how it will react. The EWS tracks are all so different and I like to have less to worry about. I also like to run the same tire setup. My go-to setup for 80% of races is a WTB Breakout and Vigilante.

What are your current fork settings?

Fairly soft. I think the settings in the fork manual are too much pressure for most people. We weigh 70kg and both ride 64psi in the fork, 1-2 tokens depending on how steep the tracks are, high speed fully open, rebound is about 15 clicks from closed.

Do you use a handlebar compression remote?

No. It’s pointless for enduro. For a shock maybe I would use it, but for the fork, I might forget about it and ride the tracks locked out. The switch on the crown is fine for me.

Do you change anything about your fork setup for different tracks or EWS races?

I just add one token if it is super steep to make it more progressive. That’s it.

As you heal up, what are some goals for the rest of the season?

To get on that podium at the EWS! That is a huge goal for me, and I was so close before I was injured. I would also like to qualify for downhill world-championships in Switzerland in September. The race is 30 minutes from where we live and I really want to race there. I am also looking forward to Crankworks in Whistler. I really love the riding there. 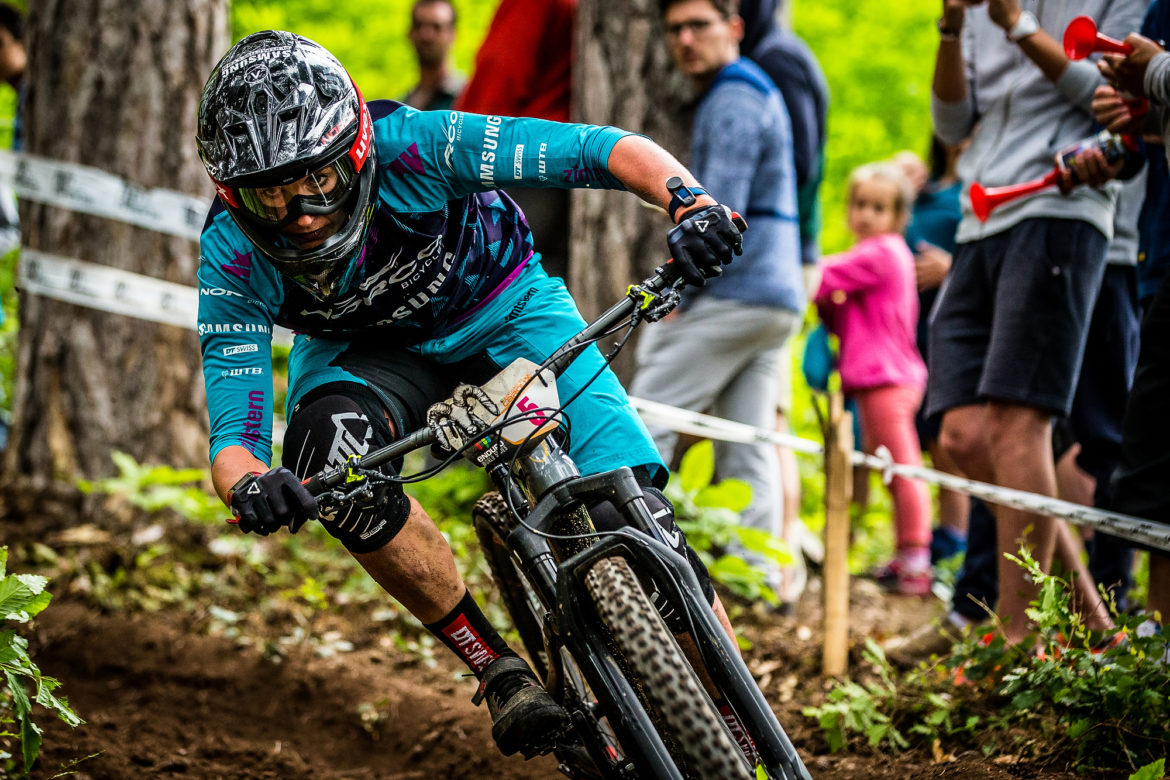 You can follow the racing action of Twins Racing on their team website. Make sure to check out this recent video of them riding coffee-trails and roasting beans in Colombia.

Trails
Tennessee's Smoky Mountains are Full of Good Trails and Good...
Gear
The Continental Kryptotal Re is More Than a Trail Tire...
Trails
The 12 Best Mountain Bike Destinations in the USA [2022]
Gear
Mountain Bike Tire Deals That are Poppin' Off
Subscribe
Login
Please login to comment
3 Comments
Most Voted
Newest Oldest
Inline Feedbacks
View all comments

Love the sleek crown on that fork. Wonder if those concealing caps make it inconvenient for adjustments at all.

I had the same question when I first saw the fork.
The answer is this: the handle of the front axle-skewer can be separately removed by hand (I believe it is magnetically held in the axle. With a little extra effort it pulls out, leaving the axle tightly in place.). Inside the handle is the Torx-driver that is used to take off the crown covers.
From there you can adjust at will.