Like almost every other company in the mountain bike industry, Yeti is jumping on the 27.5in bandwagon. This year, Yeti has discontinued the 26in wheels in the venerable 575 model and has bumped them up to 27.5in. (Disappearing 26in wheel, anyone?)

The 575 features 5.75 inches of suspension (hence the name), and has a headtube angle that runs 1/2 degree slacker than the new SB75. The 575 is designed to be a competent trail bike that borders on the enduro/all mountain market 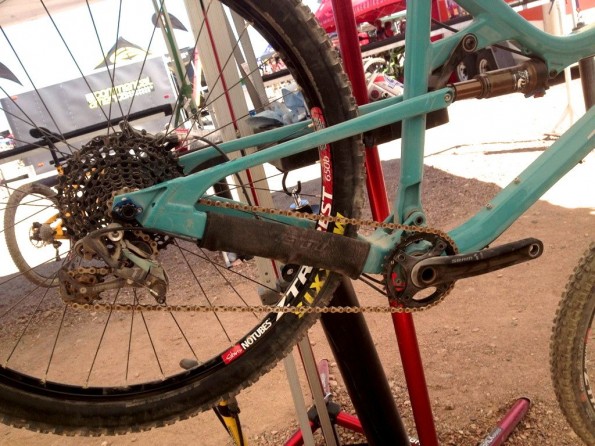 The top-of-the-line 575 model is available built up with a SRAM 1×11 drivetrain. After this article, I might breeze over it, but this bears mentioning. Last year, XX1 was the new thing. This year, almost every single bike that I saw at the show was built up with either an XX1 or X01 drivetrain, and if it wasn’t, a SRAM 1×11 build was available. The new 1×11 drivetrain setup has taken the high-end mountain bike world by storm.

At first glance, the new SB75 seems very similar to the 575 (different suspension linkage excepted, of course), but upon further examination the nuances begin to stand out. 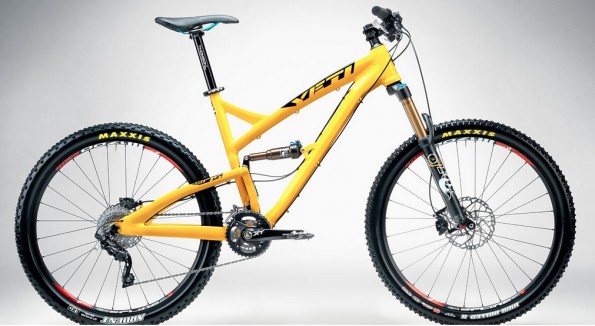 While also running 27.5″ wheels like the 575, the SB75 only has 5 inches of suspension, and the headtube angle is 1/2 degree steeper than the 575. The reduced travel and steeper HT make for a much snappier, lively bike that is more on the XC end of the Trail spectrum, instead of the AM end.

The SB66 and SB95 bikes keep the same specs and wheel sizes in 2014, BUT, on the “alloy” frames, the rear triangle has been swapped for a carbon rear triangle. This swap increases rear end stiffness, drops a full pound in weight, and best of all: it costs the consumer nothing extra!

If you bought an alloy SB66 or SB95 last year, I feel for you: the new bikes are a rockin’ deal! When asked how they could afford to pass on this kind of price savings to the consumer, Yeti responded by saying that they’ve been able to streamline some of their internal process and frame productions, and can consequently make these frames for less. Instead of just pocketing the cash, Yeti has chosen to pass the price savings on to the consumers. Bravo!

Yeah, it was really cool to hear that Yeti is dropping prices on these new bikes. One of the cost saving measures they mentioned was swapping out the Kashima-coated suspension bits which is a smart move. I’ve got Kashima on my Santa Cruz fork and shock and it doesn’t make the ride any more fun than a regular coating. 🙂

I think it is awesome that they did not raise prices and that says a lot about their company. Their Tribe is really faithful. I do hope they spec their bikes this year with a little more thought. I personally experienced what I have heard a few (die hard) Yeti owners say: they put long-ish stems and narrower bars on bikes meant to be trail/AM…which is just weird. I rented an SB95 last year in ABQ, and despite the bike receiving the highest accolades by reviewers, I thought it rode just weird. A 50mm stem and 780mm bars would have been perfect. And a dropper post. And a 1×11. Buy hey…I pay $ to be picky 🙂

I’m thinking about getting a 575 frame and build it as light but sturdy as possible. It will be fun to have a 24 pound bike with 5.75 inches of travel. Plus those 575 are a sweat ridding bike.

Damn now I need some cash to start because the previous one left me drained!