On paper, the Giant Trance has all the ingredients necessary to make a successful trail bike: a carbon frame, carbon wheels, top drawer suspension, and solid components. I tested the Trance’s big brother, the Reign, a couple years back and overall, I was impressed. But, with 160mm of travel and geometry skewed towards descending, the Reign is more bike than many riders want or need.

Giant updated the Trance for 2017, increasing front travel by 10mm, lengthening the top tube, and shortening the chainstays. In addition to the geometry changes, Giant revised the rear suspension as well, switching over to a trunnion mount rear shock and employing a one piece carbon rocker to drive it. 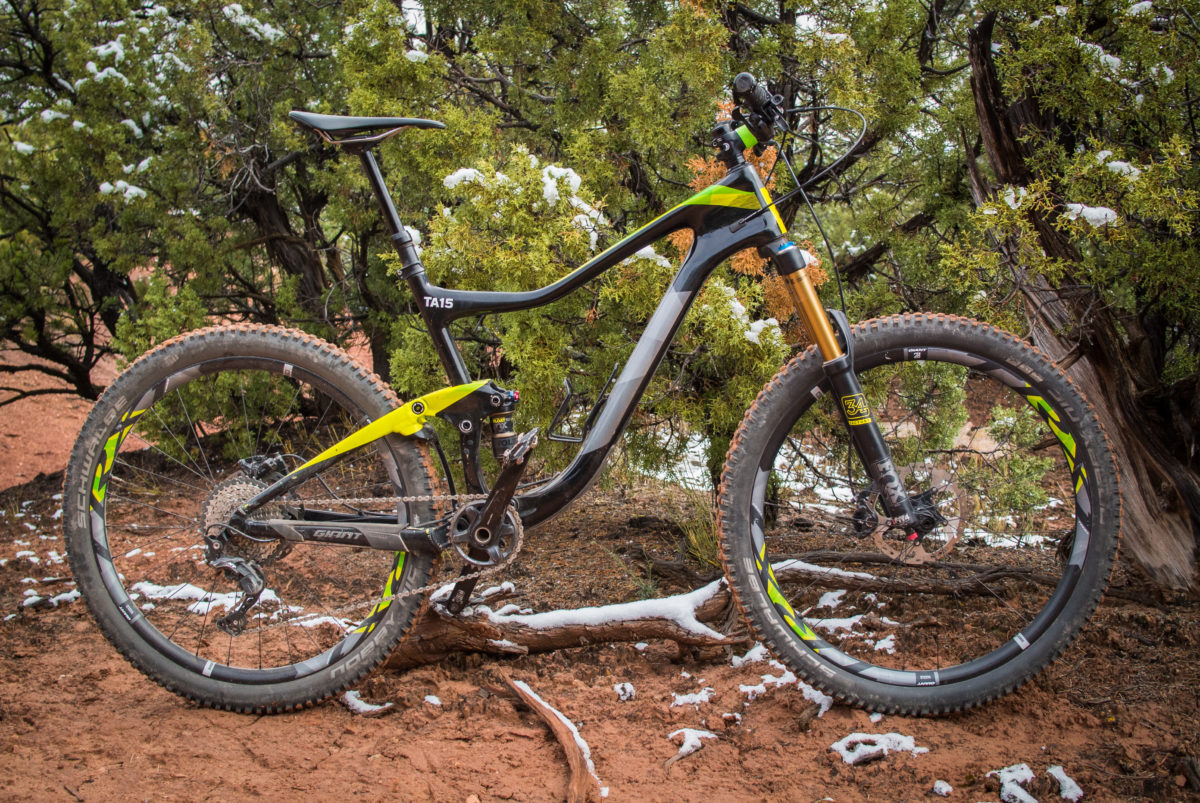 There are five models in the Trance range – two aluminum and three carbon. The Trance Advanced 1 is the mid level carbon model, coming in at $4,950. That’s a good chunk of cheddar, but running down the spec sheet shows good value for the money. You get a carbon front triangle mated to an aluminum rear end, Giant carbon wheels, Fox Factory level suspension at both ends, a Shimano XT 1×11 drivetrain, as well as XT brakes. The remaining cockpit components are from Giant, including the Contact SL dropper topped with the same ass hatchet of a saddle I experienced on their XTC hardtail the day prior. 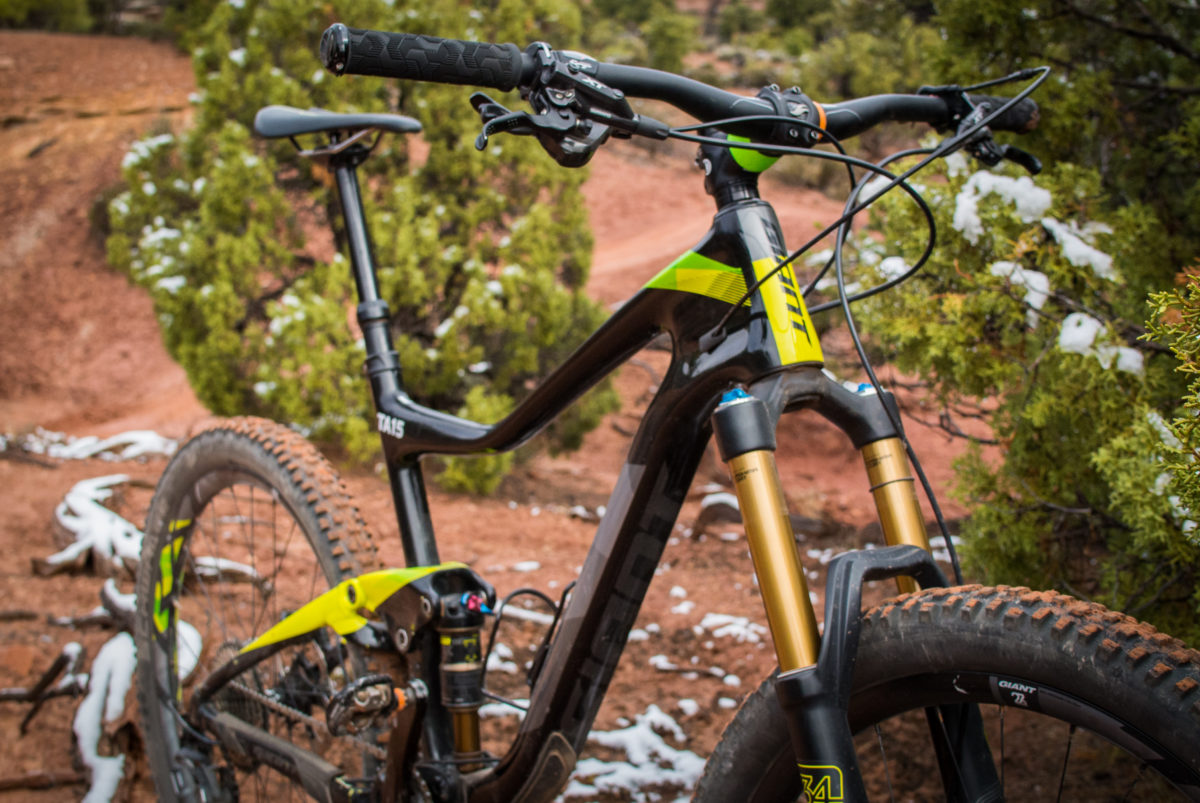 Giant bumped front travel to 150mm, but left the rear at 140mm. While the geometry saw updates as well, Giant didn’t push too far into LLS territory. As such, none of the numbers stand out. It has a 67 degree head tube angle, 435mm long chainstays, and a 448mm reach in a size large. I weighed my size large test bike in at 29lb (13.2kg) including pedals. 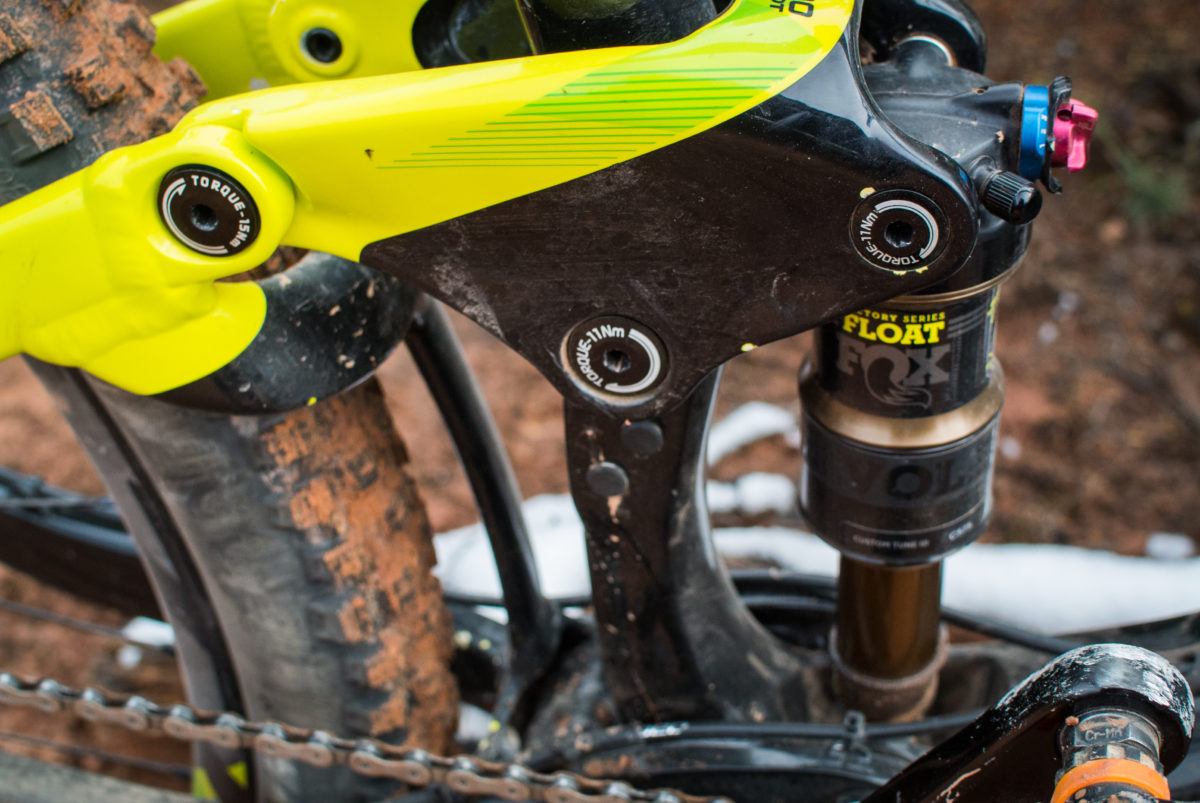 To test the Trance, Greg and I hopped on the shuttle heading to the Mag 7 trail system. It had rained overnight down in Moab, but that precipitation took the form of snow higher up. When we reached the trails, there was a little dusting of snow that was already starting to melt. The extra moisture provided us with even better trail conditions than we had the day before.

We started down the Getaway trail, which was primarily dirt. Because of this, the trail builders were able to sculpt berms and rollers into the earth. It was a flowing, pedally downhill, with a rock ledge or two along the way. All it took was a corner or two to get comfortable on the Trance. Since the Trance isn’t overly slack or long, I felt centered and neutral on the bike. Soon enough I had a good feeling for the suspension action and geometry, and I was loading the rear end through the swoopy turns.

After Getaway, Greg and I found ourselves on the Mustang trail, which we rode to Whirlwind. There was a lot more rock here, but still tons of flow. With the suspension fully open, the Trance’s rear end stayed glued to the ground. Even so, the bike remained playful and easy to hop. Flipping the compression switch into the middle setting livened the bike up under pedaling, but was noticeably less plush. Personally, I like when there are big differences between shock settings – if you’re gonna have a switch, it might as well do something.

Once we reached the end of Whirlwind, Greg and I were faced with numerous options. In the end, we elected to try the 7-Up trail since it was new to both of us. Well, 7-Up turned out to be more of a 4×4 road than a trail, so that was a bit disappointing. It was a good thing we packed trail beers to make it more interesting. We found a couple fast, ledgy spots, but not enough to make up for the long, sandy stretches. I didn’t get to push the Trance outside its comfort zone, but I did get the chance to see how well it pedaled. With the shock in that middle section, I ate up the rolling terrain, leaving Greg to slog it out solo on his 170mm YT Capra.

The Giant Trance is a safe bet for the vast majority of mountain bikers. It has enough travel to take on big descents, but not so much that you would dread riding it to the top. It’s playful, well-balanced, and easy to get along with. Unless you have regular access to the kind of terrain that a bike like the Reign demands, the Trance has just what you need.