The Fox Transfer dropper post has been on the market for less than two years now, replacing the company’s first attempt at a seat post, the D.O.S.S. The D.O.S.S. was quite popular among many mountain bikers, with Singletracks readers ranking it among the top 5 dropper posts in 2016, the very year it was discontinued. But why would Fox discontinue such a well liked–and respected–dropper post? It turns out, they had something even better in mind. 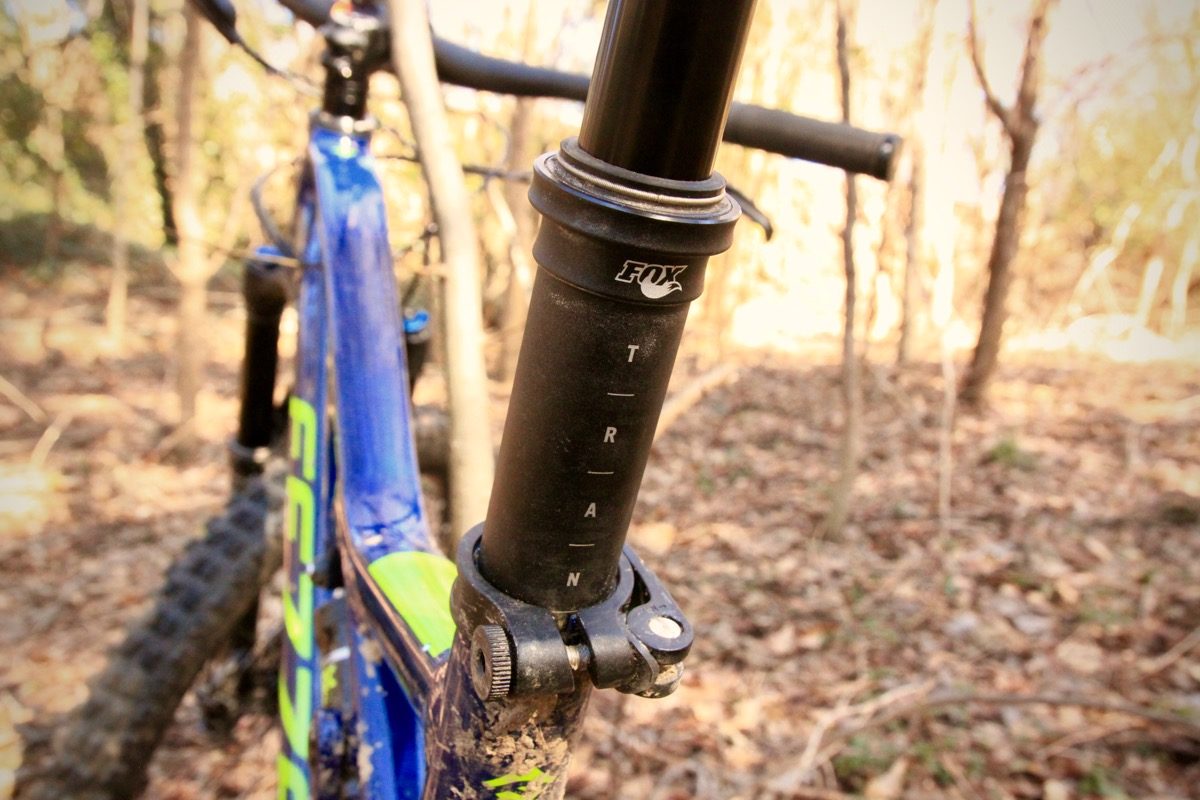 Fox offers many different sizes, configurations, and versions of the Transfer dropper post to meet the needs of all types of riders. First, Fox markets the Transfer in two different lines: the Factory series and Performance series. The Factory series is distinguished from the less expensive Performance series by its copper-color, Kashima coating on the stanchion, which provides a super low friction surface for extremely smooth operation.

Within each series, Fox offers 30.9mm and 31.6mm diameter posts, and three travel lengths: 100mm, 125mm, and 150mm. Not only that, buyers can choose from internal or external routing. Finally, Fox offers two different remotes: a left-side, below-bar lever for riders running just a single shifter, or an on-bar remote that sits beside the shift lever on either side of the bar. Remotes are sold separately, perhaps in a last ditch effort by Fox to prevent inventory nightmares and runaway SKUs from eating the company alive. 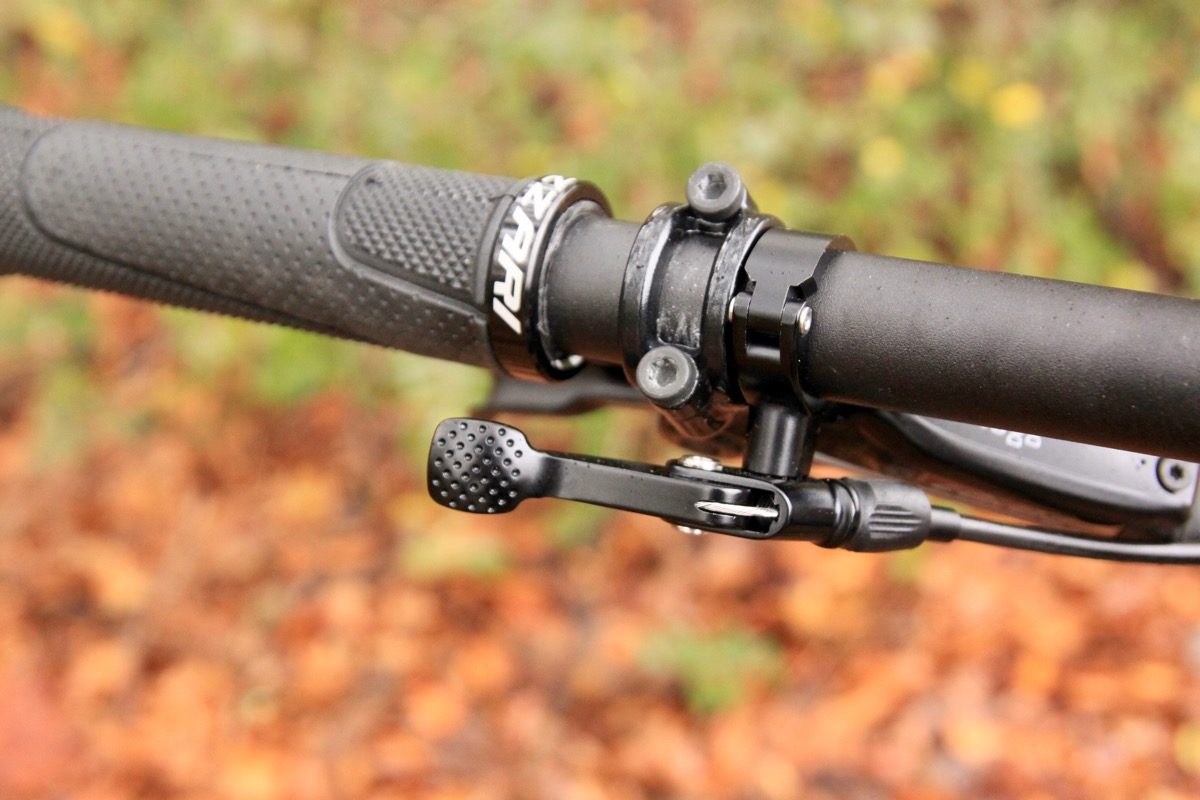 The Fox Transfer is a cable-actuated post, which means there is no hydraulic fluid to mess with, and no bleeding necessary. I’ve been testing the 31.6mm diameter, internally routed, 150mm travel, Fox Transfer Performance seat post with the below-bar remote on a Fezzari Cascade Peak mountain bike, and here’s what I’ve found.

Most of the trails that I ride feature a constant parade of short, steep climbs and descents, which means I use my dropper post a lot. Not only that, the climbs and descents usually come in quick succession, so I need a post that can react quickly. 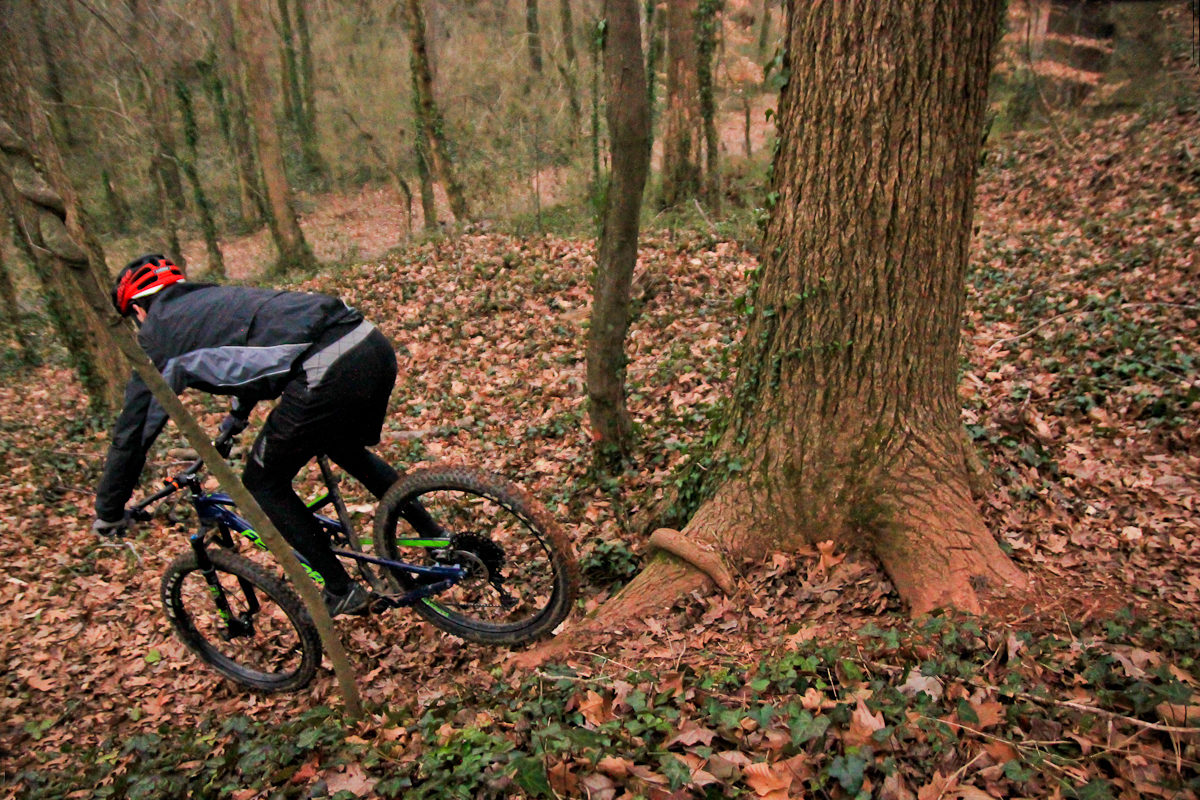 For me, one of the most challenging dropper post use cases is navigating a V-shaped gully, with steep entry and exit points. Fortunately, the Fox Transfer is wicked-fast on the return from its dropped position, which allows me to get the seatpost back into position exactly when I need it for maximum climbing power. Honestly, the limiting factor in this situation is my own ability to press the lever; the Fox Transfer itself seems to return nearly instantly, with a satisfying knock that lets me know it’s in place and ready to rock. I suspect the Factory version, with Kashima coating, is even faster on the return.

I’ve been using the Fox Transfer dropper post in some pretty nasty winter conditions, riding in below freezing temperatures, light snow, and sticky winter mud. While at various points my riding buddies ran into problems with stuck dropper posts, the Fox Transfer didn’t fail me once, despite the challenging conditions. I found especially cold temperatures did slow the action on the Transfer a tad, but once things warmed up it went right back to its normal, quick-action self.

Speaking of action, the Fox Transfer return rate can be modulated at the lever, which is a nice option to have. Pressing on the lever firmly brings the post up right away, while a light touch slowly eases the saddle up. This is helpful in transition spots like the gullies I mentioned earlier, and it also makes it possible to get the saddle to the perfect in-between position to set up the rider’s next move. I found the audible thunk the Fox Transfer makes when it does reach its full extension lets me know where the saddle is without having to look down or feel around with my thighs.

This should go without saying for any dropper post worth its salt, but the Fox Transfer never feels squishy or bouncy when mashing the pedals in a seated position. And after several weeks of use, the Fox Transfer post has developed virtually zero side-to-side play. Taken together, these two factors make for an especially stable seatpost, despite all the moving parts. Admittedly, I may have picked up my bike by the saddle with the Fox Transfer in the down position once or twice, with seemingly no harm done. Even in the down position, the saddle feels locked in place, with no discernible movement up or down. 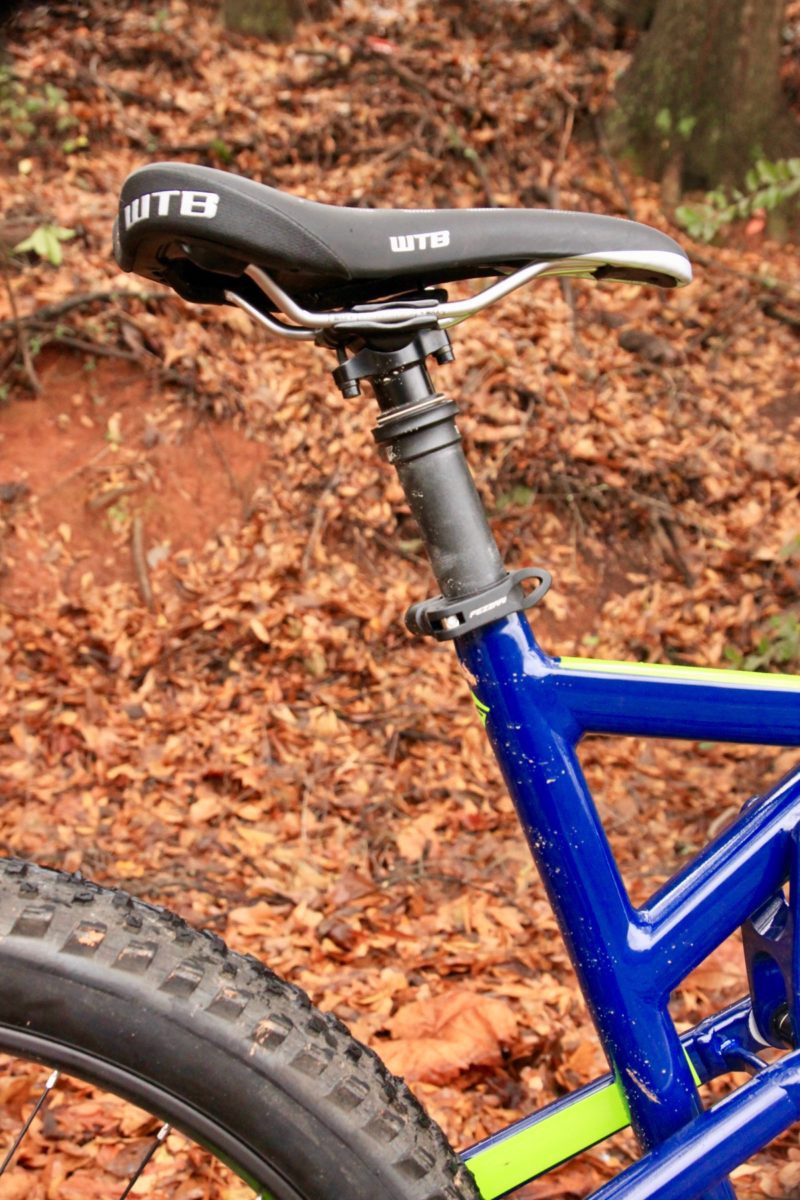 I’ve found that riding with 150mm of seat post travel is a dream. Having the ability to consistently and reliably get that low on the bike is a game-changer, even for someone who is used to riding with a dropper but perhaps with less travel. For extended pedally but twisty sections, I love being able to drop the post about 2/3 of the way down for maximum control without killing my quads. Then, when things get really steep, I love having the full 150mm of travel for getting back behind the saddle. 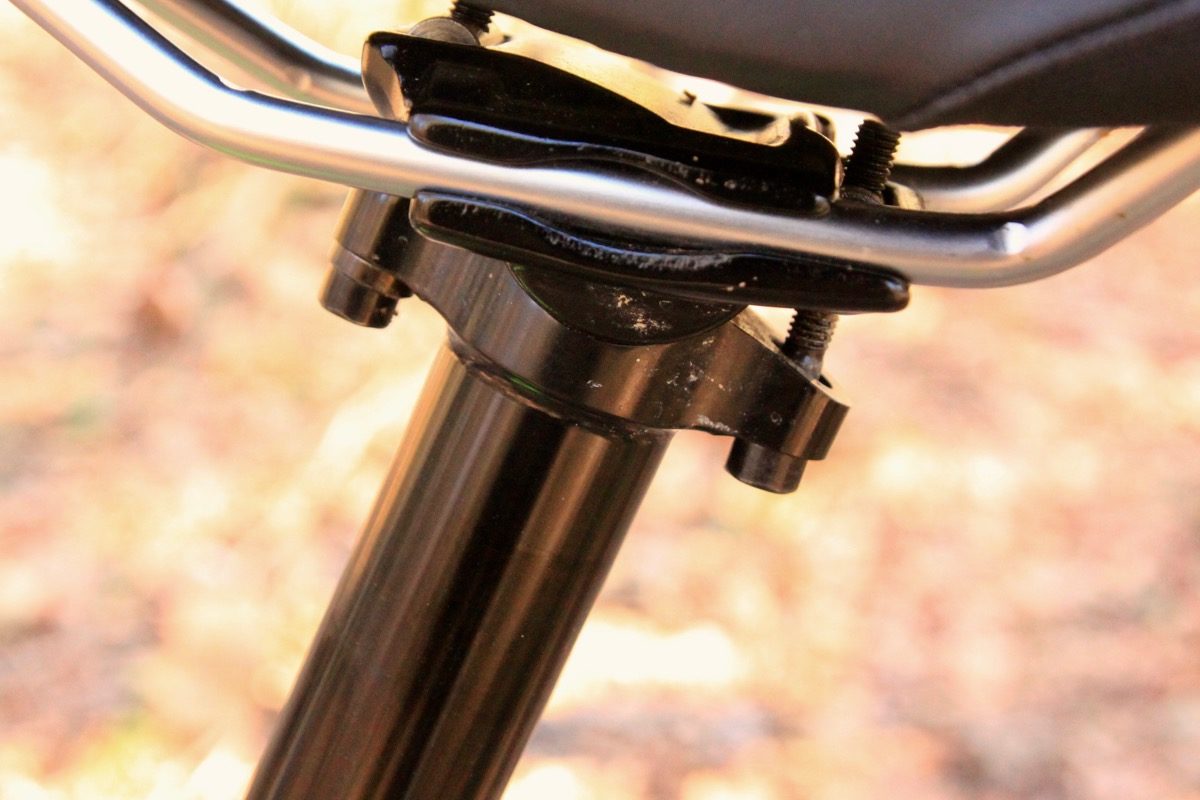 Fox uses a pretty good system at the saddle clamp on top of the post that allows the rider to get the saddle position and angle dialed in nicely. Keeping all the bolts, washers, and barrel nuts in place can be a little tricky when installing a new saddle, but no more so than most of the clamps already on the market.

Fox recommends wiping the post down after every ride to minimize dirt and grit incursion into the post. The company also recommends rebuilding the post every 125 hours of ride time, or once a year, whichever comes first. Unfortunately, there is no easy way to add pressure to the internal canister, so if the post is starting to slow its return, it may be time for a rebuild.

The Performance version of the Fox Transfer post I’ve been testing retails for about $294 USD, while the Factory version is generally priced about $50 higher at $344 USD. As I mentioned at the start, Fox sells the remote separately, with the below-bar version priced at $65 USD.

The Fox Transfer dropper seat post builds on the company’s reputation for providing high quality, reliable components for mountain biking. With so many options and configurations to choose from, virtually any bike can take advantage of an upgrade to the Fox Transfer.

I’ve been running this post on my trail bike and the fatty with ZERO problems. 5-100 degrees F, mud, fine dust, etc.

Don’t waste your $ on the factory version and run the Wolf Tooth remote instead of the Fox.

Great article Jeff. While I love my Reverb, the bleeding process does get old, especially when there are other components that need it as well….it makes for long maintenance days. The Fox is a good contender for my next post. By the way, where were you riding for this review?

I’ve been testing in the Atlanta area. The photos were taken in a local park and on a friend’s backyard trails.

I also have over 1000 miles on my factory dropper and it works great! easy to adjust with the barrel adjuster as the cable got a little stretched. about time for a rebuild though….

I’ve had this post for about a year now. Still no side-to-side play, or bouncing. Remote took some getting used to because my thumb would slip off the pad when trying to quickly drop the saddle. After playing around with positioning, I found a spot that works perfectly and I’ve had no issues.