I have been putting off this final review of the Yeti 575 for one simple reason: I don’t want to give it back. I’m like a ten year old playing iPad games for the first time. I didn’t even know life could be this awesome. If you read my first impressions of the bike, you know that even at first glance I was unexpectedly stoked. That stoke did not diminish.

In fact, I loved it so much that I knew I had to take my stick bike lean game to an all-new level to do it justice. Get on my level, scrubs. 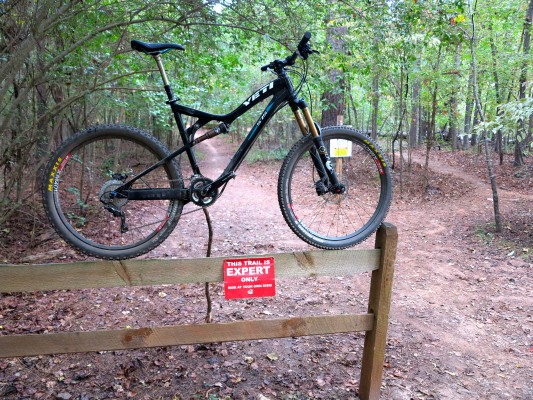 I also avoided taking the Yeti 575 to my usual bike speed testing ground, that being the Dwelling loop of the Blanket’s Creek MTB trail system, for the same reason that someone might avoid taking a great new significant other to meet their parents. I was afraid it would do too well, which would mean I’d have to start thinking about making this relationship permanent.

Here’s our esteemed publisher Jeff shredding it up on the 575. He had to model it because he had the presence of mind to wear his Singletracks jersey. Marketing! 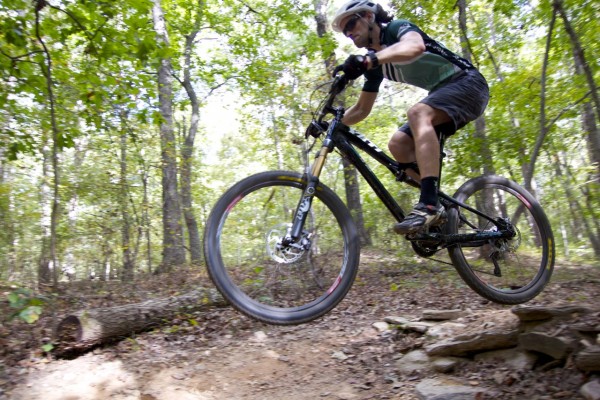 I was right to be concerned about the 575’s performance. Aboard it, I took significant time off my loop record. I felt especially confident descending on it. Dwelling doesn’t have much climbing, it’s just a fast flow-style trail. But for all its slack angles and suspension travel, I never felt like the 575 was sluggish. I’ve ridden some bikes that I felt wanted to climb, and I’m not sure I’d say that about the 575, but it’s plenty capable. 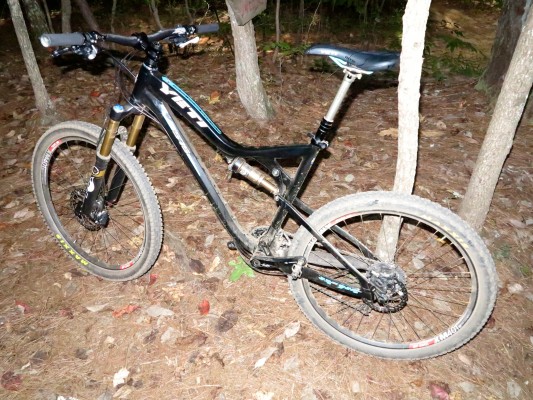 Keep in mind that the 575 is not a maximum effort speed machine. If I got my hands on something with similar angles and build kit but with carbon frame and carbon wheels, I could probably go even faster. Speed’s not even my thing, as anyone who rides with me knows. But speed is also a function of how comfortable and confident I feel on a particular machine. I felt both on the 575. 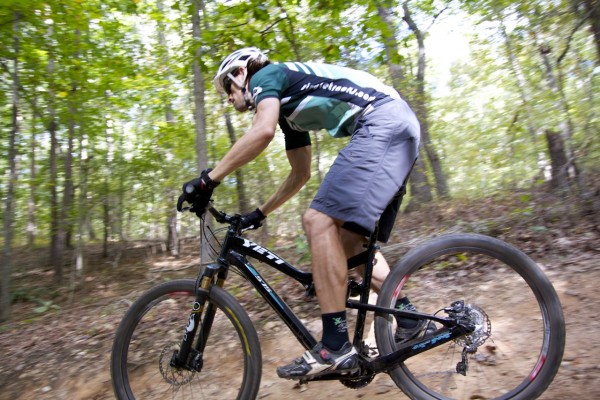 The 575 has been around for a while, but this model is the updated re-kejiggered 27.5″ version, new for 2014. It’s meant to be a fantastic all-around–or in the parlance of our times, “trail”–bike, which is probably why Yeti elected to move it to the 27.5″ platform. Right in the middle, between 26″ tiny glass slippers and Frankenstein’s monster-style 29″.

For some reason, a couple of the bike industry people I have talked to turned up their noses at the 575. Everyone loves Yeti, mind you, but I heard some shade thrown at this particular bike. Maybe it’s because for just a couple hundred more dollars you could be aboard the Yeti SB75. But then you’d have to live without the Thompson Elite Dropper post.

One bearded bicycle pundit lamented to me that the 575 didn’t handle “trail chatter” well enough. There’s definitely some hard-to-handle chatter in this area, but, in this case, much of it was emanating from that gentleman’s beard. The 575 smoothed out trails just fine.

While I’m on the subject, let me say that bike industry people don’t know diddley about bikes. Do they know about components? Sure. Trails? Yes. Technique? Absolutely. But a bike is something that is greater than the sum of its parts. As soon as you think too much about any part of it, rather than the whole, you’re basically just waving your crank around.

Having said that, let’s take a look at a photo of a nice stiff crank right here.

The test 575 I got my hands on was their “race” spec’ed bike, with Shimano XT drivetrain and brakes making the stop-n-go, and DT Swiss 350/xm ltd wheels with the cash-money Maxxis tire combo of Ardent rear and High Roller front.

I’m a fan of this tire combo. The High Roller is aptly-named for its ability to cruise, and the Ardent’s got the knobs to put the power down. Yeti have employed the Ardent/High Roller to continue and emphasize the 575 as an all-around bike. If you called up Maxxis and said “Hey, do you have a tire combo that will do pretty much anything?” they’d put an Ardent and High Roller on you before you finished talking.

But wait, does the suspension also do it all? Glad you asked. Yes, Virginia, it does. The Yeti’s loaded up front with the Fox 34 Kashima at 140mm of travel, and out back there’s a Fox CTD Adjust K+. Both have the CTD system, or “Climb, Trail, Descend,” which offers easy switchability between three different settings. And both front and rear suspensions have damping adjustments as well.

Here’s the rear shock. You can see the blue lever for choosing Climb, Trail, or Descend, plus the red knob which is your damping setting. 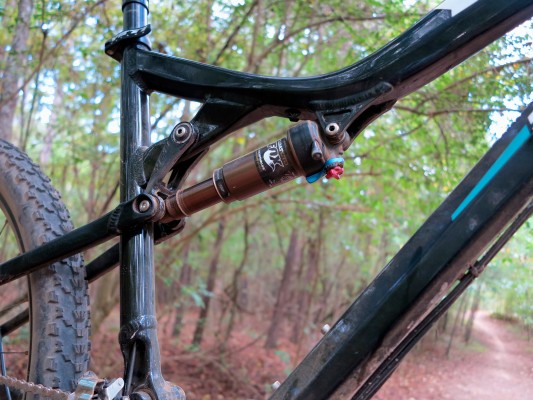 And here’s the front, with the CTD selector on top of the right side of the fork. 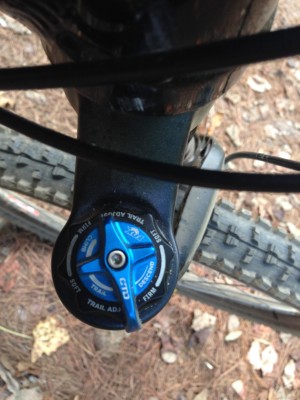 The rebound speed on the fork is adjusted by the red knob down below. Awwww yeah. 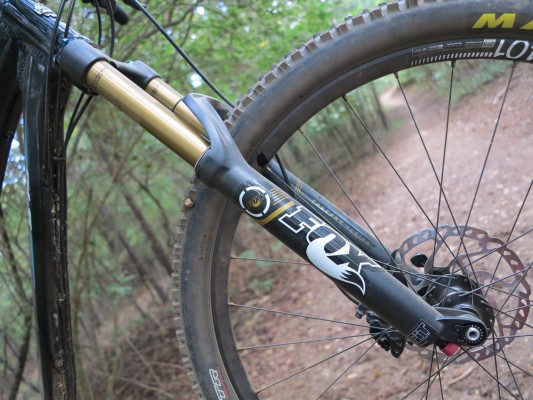 What else does it all? Oh yeah, the seat post. Want it low like a dirt jumper? Press the quick release and bingo. Want it so tall it’s alongside your kidneys? Can do. And all with Thompson’s sweet “covert” release cable, which you can see slinking up the seat tube behind the crank in this photo. No outboard cables to snag your intimate jewelry! 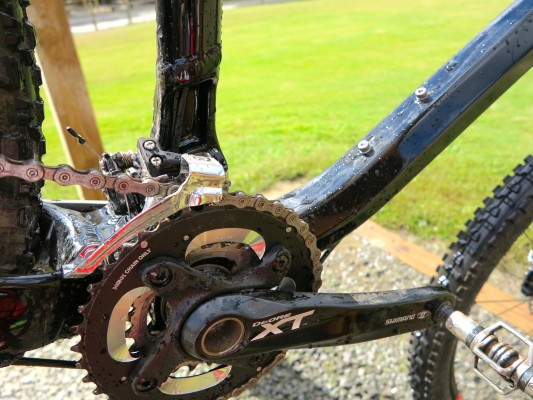 I dug the WTB seat, too, branded especially for Yeti and with matching color seat rails, which you can see here peeking coyly from underneath, or “fromunda.” 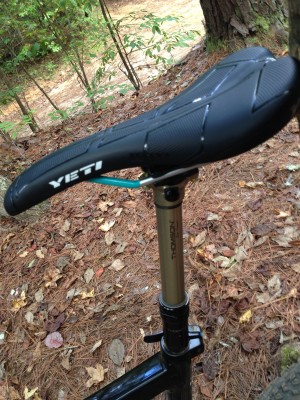 I have our friends at Atlanta Cycling and Atlanta Pro Bikes to thank for helping me get the 575 weighed. It came in at a not-light-but-not-crazy-heavy 30lbs 11oz. 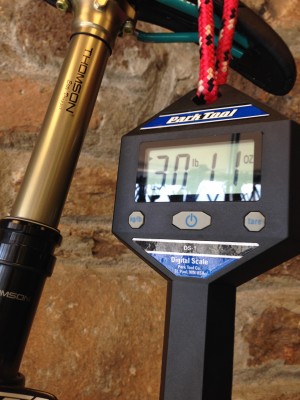 As I said at the beginning of this article, I love the 575. If you are looking for a bike that you can do everything mountain bike-related on, and you want “prosumer” level gear on it, and you have $4,600 to spend, give this bike a hard look. As I also said above, there are other choices close to the 575’s price range, but I think I get why this bike is the way it is: versatility.

And I think Yeti chose the right spec to have, too. Putting a pro drivetrain on would be against the 575’s spirit, as would be putting on a cheap group. Notice that Yeti does not even offer a cheapo group on this bike. XT’s as “low” as you can go.

What I can tell you is that the Yeti 575 is absolutely worth your time. But you’ll need to put in some effort and get to know it to know whether it’s the ride for you. Get out to a dealer or a demo day and see what you think.

Yes, you could put carbon wheels on this bike and it would be faster. You could replace the Thompson post with a carbon pole to get weight down. But that represents specialization, which is against the Yeti 575’s spirit. I’m not saying the 575 isn’t special, I’m saying it’s special because of its commitment to do as much as it possibly can. It’s not a rifle, it’s a shotgun. So give it a shot!

Gear
Why Kids Bikes May Need to Take a Hint From...
Trails
Reverberations from the Bike Boom Continue to Rock Trail Traffic
Community
Klunking for Kyle: Commemorating a Life with Mountain Biking's Original...
Progression
Feeling a Little Sluggish on the Trail This Spring
Subscribe
Login
Please login to comment
2 Comments
Most Voted
Newest Oldest
Inline Feedbacks
View all comments

My impressions exactly. The 575 (every versions since it’s inception) has been quite possibly the most versatile single bike in existence. While it may not be the “best” in any single category, it comes really close in every category and can guarantee a wicked good time on any trail, anywhere.

This sounds like such a fun bike! I could totally see myself riding this.