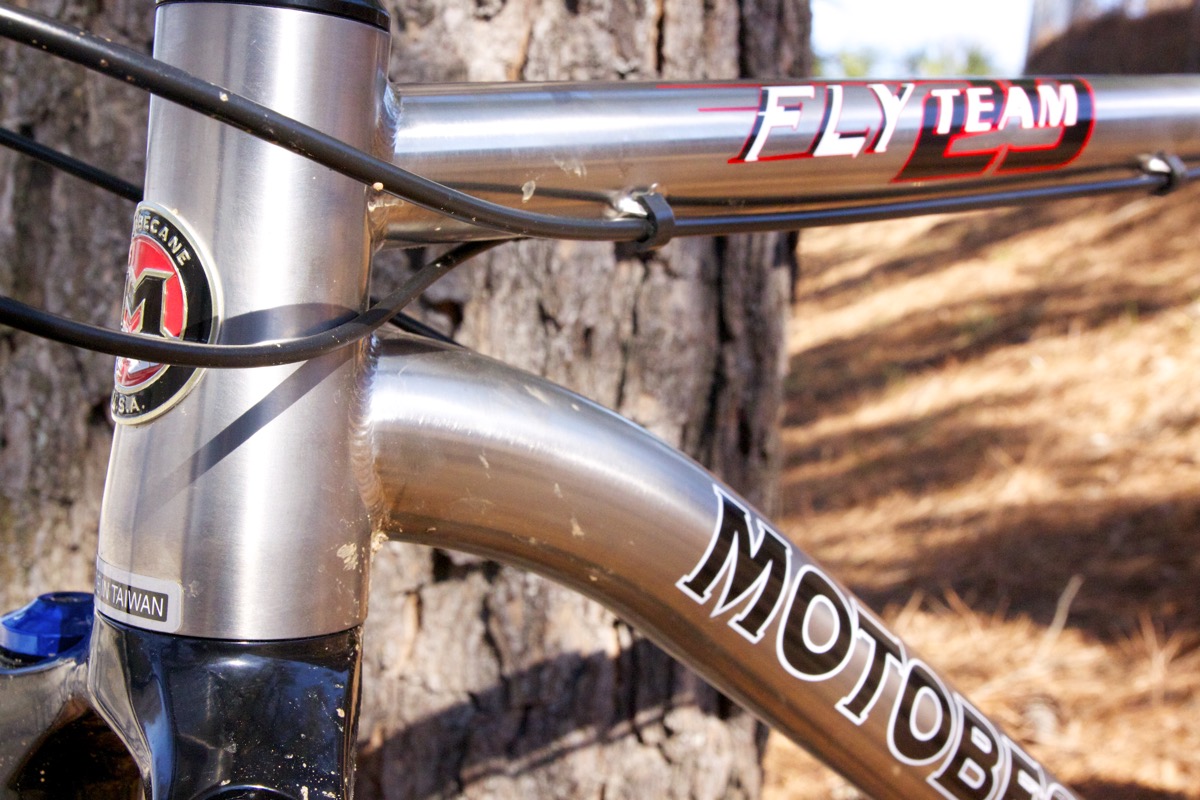 I’ve been testing the Motobecane Fly Team 29 titanium mountain bike for several weeks now, and if you read my first-look article, you know this is a seriously-dialed build. With a full Shimano XTR 11spd drivetrain, RockShox Reba fork, and top-shelf Ritchey components slung on a polished titanium frame, this is an XC race bike that’s tough to beat. And after riding countless miles on the Fly Team 29 I can tell you: this bike is ready to roll.

With a lightweight titanium frame and more gears to spare than a Swiss watchmaker could ever use, the Fly Team 29 is explosive on the climbs. Many times the rear wheel would literally spit gravel as I struggled to shift enough weight onto the rear wheel to match the power transfer from the pedals. This bike is a hardtail, so there’s no noticeable power loss from pedal bob but not only that, it feels very laterally stiff as well, so there’s very little left-to-right flexing either.

The Fly Team 29 Ti ships with the all-new Shimano XTR 11spd drivetrain and at the top end, the cassette features a 40-tooth cog which took several notches out of pretty much every climb I threw at the bike. In fact, I never found the need to shift out of the 36t ring into the 26t during my testing–but just knowing the 26 is there assured me I could climb anything on the planet. That is, as long as I kept the wheels in contact with the ground.

This is a cross-country bike plain and simple, and while the bike isn’t optimized for fast descents or drag-your-bars cornering, it holds its own thanks to the stiff and responsive frame. Out of the box the Kenda Small Block 8 tires handle well on hardpack and allowed me to carve a berm or two without feeling uncomfortable.

Descents require a bit more finesse–point and shoot is not a good strategy with a lightweight XC bike like this. Fortunately the Fly Team 29 makes up for its lack of forgiveness with its ability to float and loft under the skilled rider’s control. Not that I’m always that rider… but I can appreciate how responsive and lightweight this bike is on the trail and through obstacles.

After weeks of riding the Fly Team 29 Ti my two biggest complaints have to do with fit components, not the bike itself.

The Richey Streem V3 saddle is ultra lightweight and looks great but for me personally, it’s uncomfortable. I have no problem with minimally padded seats like this one but it’s just something about the shape that doesn’t work for me. Chalk that one up to personal preference.

I also found the bars to be uncomfortable, particularly on longer rides. I’m not sure why, either–neither the rise nor the sweep are extreme. In fact, as far as I can tell the overall setup is pretty similar to my other bikes. In the end I think the bars are probably a tad too wide, especially considering the length of the included stem. If this were my bike I would try hacking 10mm off either end of the bars to see if that improves the feel.

The single non-component issue I found with the Fly Team 29 is that I noticed my heels rubbed the chainstays about once or twice every ride. It wasn’t frequent or disruptive at all but was noticeable nonetheless. In looking at the angle of the chainstays compared to another bike, it appears the bend in each Fly Team 29 chainstay is more gradual and located slightly farther away from the rear hub and toward the crank. I attempted to take some measurements to quantify the differences but we’re talking millimeters. Note: I wear size 46 shoes, which certainly hang back farther than most. 🙂 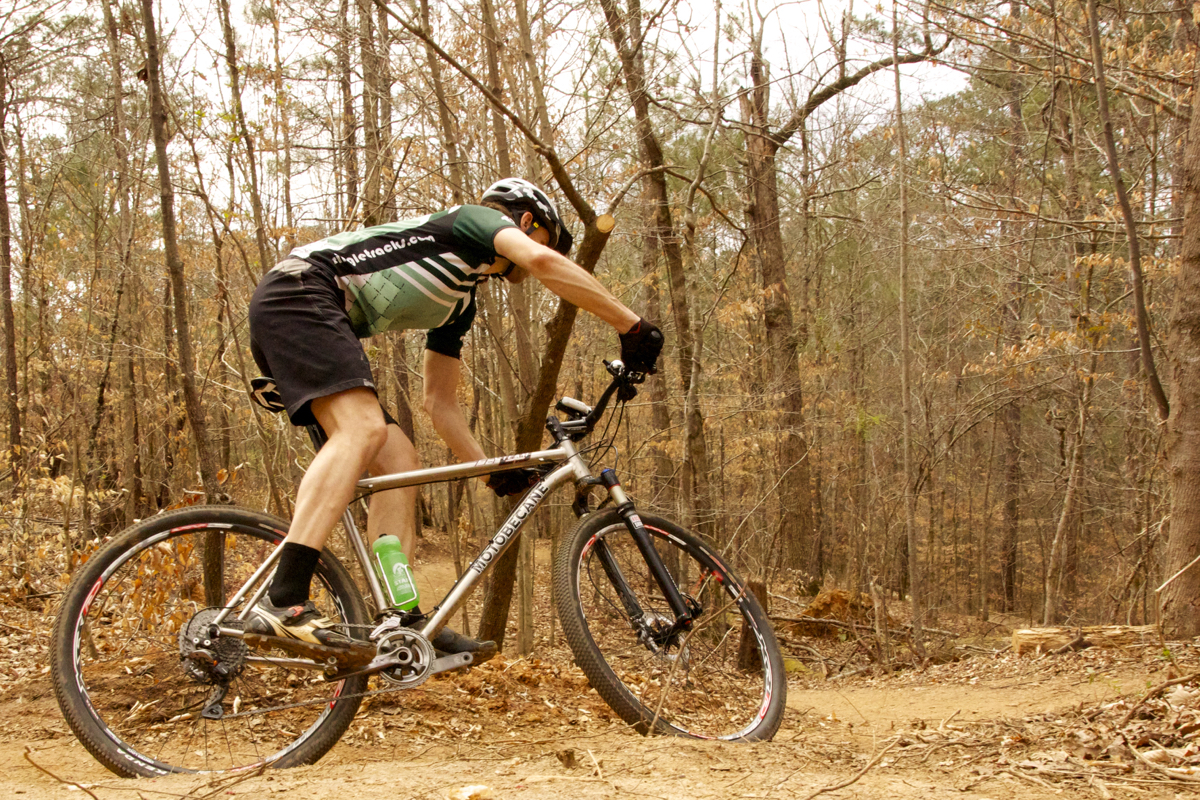 Let’s face it: a titanium hardtail mountain bike like this one is a trophy bike–and in more ways than one. Yes, it’s a marvel of beauty, quality, and simplicity worthy of sitting on a shelf. But it’s also race-fast and capable of collecting even more trophies–both the virtual Strava kind and the actual podium kind as well. This is the type of bike many riders aspire to add to their stable one day and the best part is, it’s affordable today for many of those same riders, with a price of $3,499. Motobecane notes that a similar build from another brand will typically come in around $5,000-6,000 and I don’t think that’s an unreasonable estimate at all.

The Fly Team 29 Ti rides fast and light–perfect for riders who love the classic look and feel of a titanium hardtail. This isn’t the flashiest bike out there but that’s OK–this bike is designed to make YOU look good as you race to the top of the podium every weekend.

Have their 2014 model with XTR.
Customized mine like most do with any bike.
Wider bars, short stem, better wheels and fat tires(2.35″ ikon rear, 2.4″ MK2 front). Even she’d a bit of weight with many of these parts.
Now it’s much more of an all round trail machine but still wicked light. The fat tires really take this bike to the next level. Just awesome.

Motobecane says the rear can accommodate up to a 2.35″ tire so a 2.5″ might be too big. Check out the on-review and scroll down to the last photo to see what the clearance looks like with the stock, 2.1″ tire.

I have fitted the Maxxis Ikon 2.35 without issue but it is getting close to the front mech.
The seat tube does have a slight bend and the frame has S stays…I think a 2.25″ tire is about as fat as its going to take. I have also fitted Schwalbe 2.25″ Ron and 2.35″ Big One slicks, the latter being astonishingly fast on smooth surfaces.
Its really been a great bike.
I am of the soorta old school mentality where my mountain bike is really a one bike that does it all.
I dont drive so I ride to the trail head and use it for local jounts on pavement as well as hooking up my Bob Yak and going stealth camping.
Early on I crashed going downhill into a pile of moss covered boulders quite hard. Hard enough I was worried I bent the fork or frame but it was the wheel that dented. The frame took quite the hit and didn’t flinch yet is very smooth. Never harsh.
I llok at other ti frames and they want $2000 US for just the frame! I paid $2500 CAN for the whole bike!
That $2000 frame likely used straight gauged tubing judging by the heavier weight etsimates whereas mine is butted. I would put my frame up against most other production US ti frames anyday.
It has features of higher spec frames such as butted and shaped tubing. S bent stays. Even the stay bridge has been rounded. That is a lot of tube manipulation for cheap.

Jeff, I am glad to see testing Motobecane bikes. I have two in my stable and love them. My most recent is the 2015 Moto 6by6 Pro. I have only read one review (albeit short) on mtbr.com. Is there a possibility that you could do a review on it and give your opinion? Thanks.

How much does it weigh?