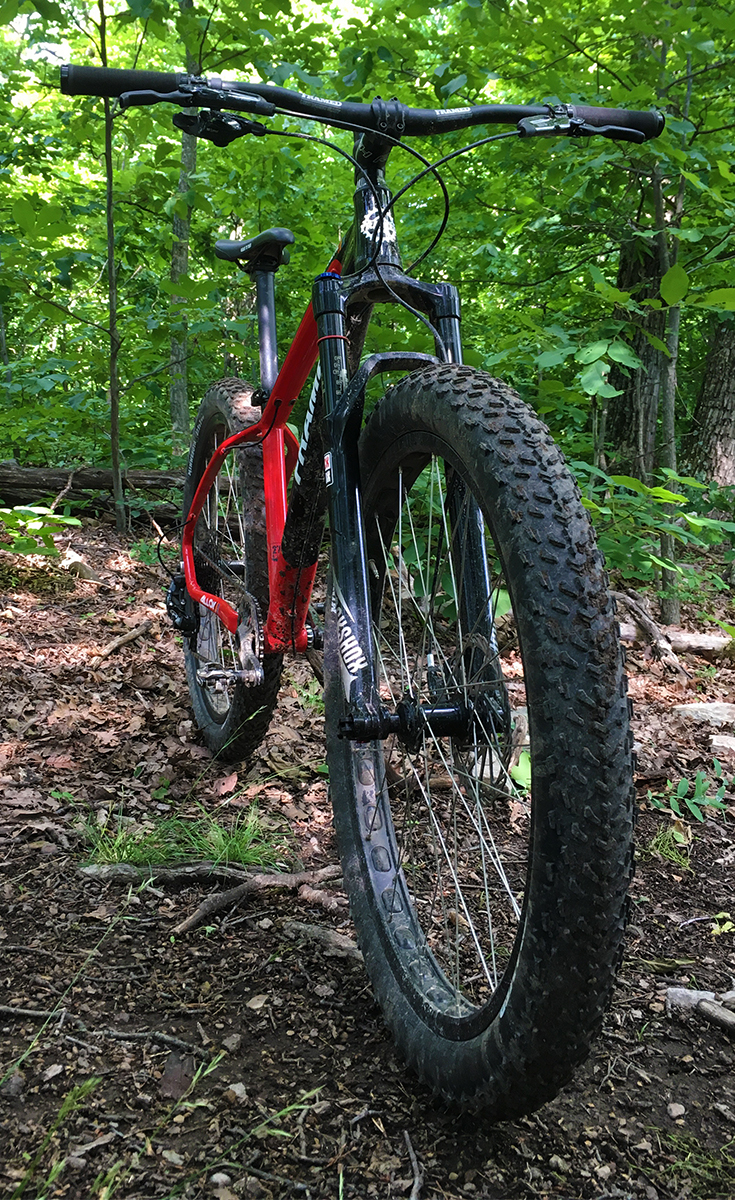 I’ve had my eye on plus bikes ever since they became a “thing.” Bridging the gap between “normal” mountain bike tires and fat bike tires, plus-size mountain bikes are remarkably versatile, retaining the confidence-inspiring traction of the wider end of the tire spectrum while being a little more nimble with less rolling resistance than true fat tires.

It only took one ride on a 27.5+ to know that I would need one in my bike quiver–sooner rather than later. When the Framed Marquette came up for review, I jumped on the chance to try out a hardtail with my new favorite wheel size.

Framed Bikes, out of Minnesota, is best known for their affordable line of fat bikes. They also produce a diverse line of BMX and comfort bikes, as well as a gravel bike, a couple hybrids, and a kids mountain bike. Now, they’ve stepped into the more mainstream MTB market by launching the Marquette, a 27.5+ hardtail available in both carbon and alloy. I rode the higher-end alloy build around all summer long, and had a blast!

There are two different build options for the alloy Marquette. The lower-end spec comes with a Suntour Raidon fork and SRAM X7, while the rig that I rode had a RockShox Reba RL 120mm fork that is compatible with 27.5 or 29-inch wheels, a SRAM GX 1×11 drivetrain, and SRAM DB5 hydraulic brakes with a 180mm front and 160mm rear rotor. 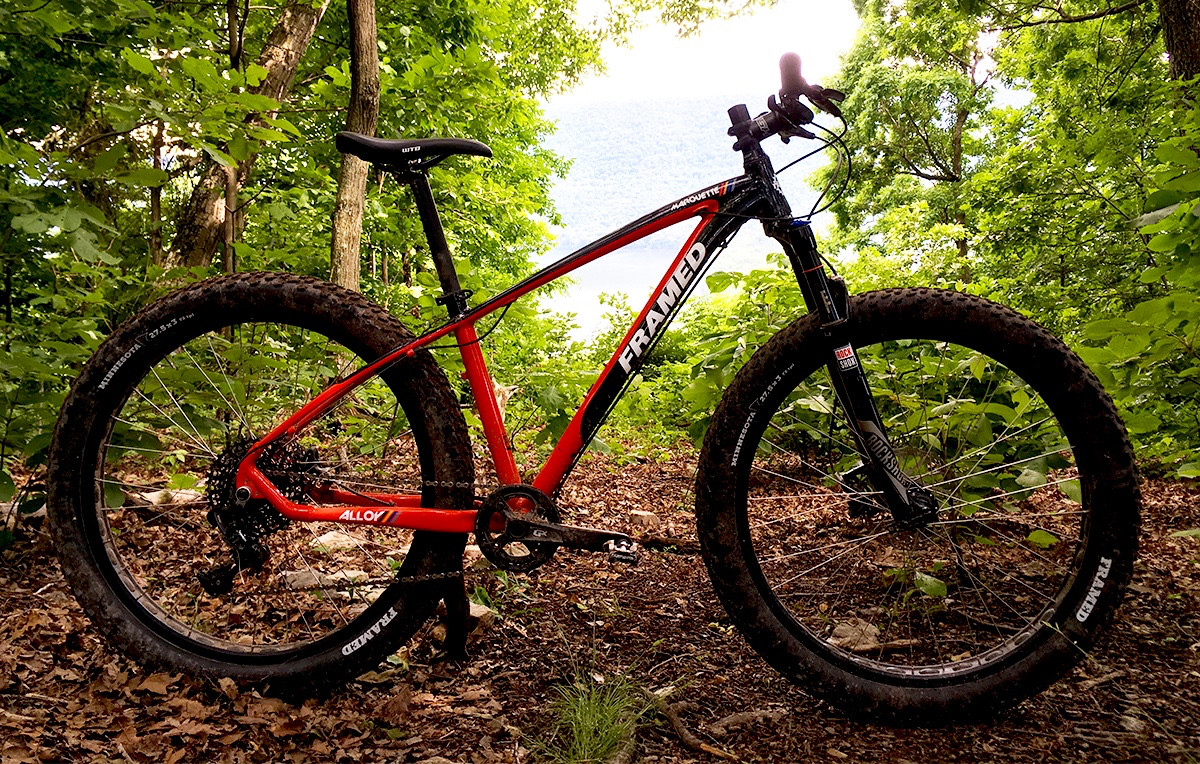 The frame is made of 6061 aluminum alloy, and offers BOOST spacing. It is available in 16, 18, and 20-inch sizes (I tested the 16″). The small frame offers one water bottle cage mount, and partial internal housing.

One of the reasons why Framed’s bikes are so affordable is that they make a lot of their own parts in-house. The stem, bars, seatpost, hubs, rims, and tires are all made by Framed, so that reduces a fair chunk of overhead associated with using a variety of different companies’ parts. The rims are 32-hole 50mmx27.5, and the tires are Framed’s Minnesota, a 3-inch-wide, 72 tpi tread.

The carbon frame comes with a wider variety of build options–two different fork options, each with X7, X9, X1, or GX drivetrains.

When I first took the Marquette out of its box, I thought it felt pretty heavy. But granted, I’d gotten used to riding my rigid singlespeed a lot over the couple months prior, so that didn’t necessarily say a lot. The bike with its stock build ends up weighing in at a little over 29 pounds, without pedals.

The other thing I noticed right off the bat was that the stem seemed to be a mile long. 100mm was probably going to leave me pretty stretched out and front-end heavy, especially with the slightly-steeper geometry of the Marquette.

My first ride indeed confirmed that I’d need to swap the stem out and move the bars down a little bit to gain more control on the climbs, to alleviate the tendency of the front end to wander. Once I made those changes, and rode the bike a couple more times, I felt right at home.

I was impressed with how well the Marquette rode–it was a lot more nimble than I expected just from looking at it. The size-small frame seemed larger than I was used to, but once I got on the bike and started riding it, I didn’t feel like it was too big at all. I’m a little more stretched out on it than on some of my other bikes, even with the shortened stem, but not in a bad way. Once I dropped the bars down a little, I found the bike to be really stable as well, offering a great mix of playfulness and stability in a variety of terrain.

The Marquette handled the rock gardens of Pennsylvania and West Virginia really well, and I cleaned a few technically-difficult trails for the first time on this bike. Obviously a part of that is just getting better as a rider, but I think another part had something to do with the handling of the Marquette, as well as the tire size. It was really easy (okay, easy being relative…) to float through the rocks. Just keep the front end light, keep pedaling, and this bike would cruise on through. Despite being a hardtail, the Marquette crushed the descents. As has been the case with some of the other plus hardtails I tried out at Saddle Drive, that extra meat on the tires and added cushion help provide a more “full-squish” feel while descending, yet still offer super efficient climbing capabilities. Though, on many occasions, I did wish that I had a dropper post to round out the fun factor of this bike.

I found the Framed to be really comfortable no matter what I was riding–from singletrack all day long, to gravel, and even some roads. I did a ride from my house to some local trails that included a lot of time on the road, and the Marquette didn’t feel that sluggish, even with the 3-inch meat. I locked the fork out and this bike ripped.

I did end up swapping grips for my ever-trusy Ergons, but everything else was great comfort-wise. I really liked the WTB Volt saddle that comes stock on the Marquette.

This was my first time riding the Reba, and I was really impressed with it. After setting up my suspension at the beginning of the test period, I didn’t have to add any air at all or do any maintenance. The lockout adjustment worked superbly, and I liked that it was infinitely adjustable. The amount of compression and damping felt good no matter what I was riding. The fork did a great job of soaking up tiny bumps from little rocks, as well as helping to absorb the blows of super-chunky downhills.

I was happy with the SRAM DB5 brakes as well, and didn’t have any issues during the course of the test period. They worked great even when super wet and gritty.

A Word on the Plus Tires

I mentioned my affinity for plus-size tires above, but the past couple months of riding the Marquette was the first time I’d actually ridden them for an extended period of time. I have to say, my love affair continues. I’ve spent so much time riding on fat bikes, and my fat front/half-fat “Frankenbike,” that the wider tires help me feel a lot more confident through techy terrain. Plus tires still give me that confidence, but obviously are a bit lighter and faster for the summer months. 29+ tires are a bit too large in diameter for all 5’3″ of me, so 27.5+ has proven to be the perfect size.

At first I complained that the 3″ Minnesota tires on the Marquette weren’t beefy enough, because I tend to like a pretty knobby tire for the slick rocks and roots of Central Pennsylvania. But after playing with pressure for a while and finally figuring out where I needed to be, Framed’s house-made rubber grew on me. Having a little bit of a sleeker tread pattern on a bit of a wider tire was a good thing after all, helping them to feel less sluggish on smoother trails. For reference, I usually ran them right around 10 psi (I weigh 125lbs). 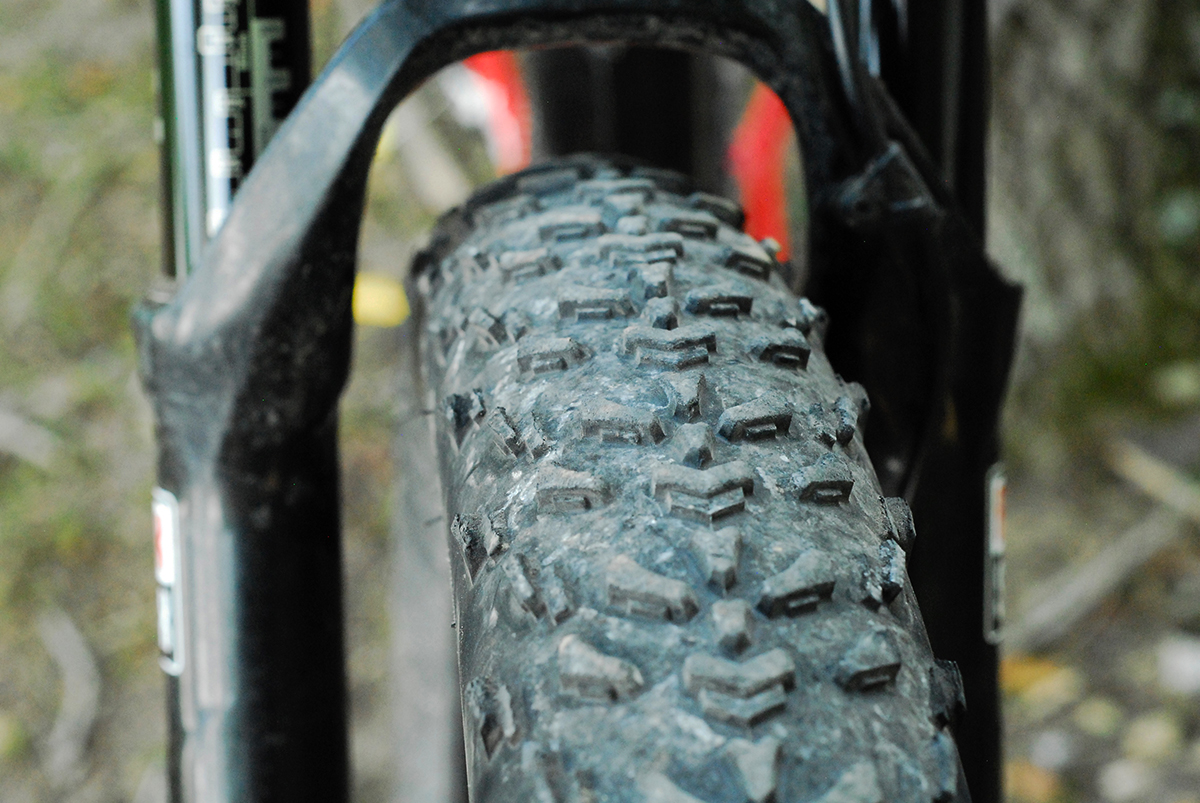 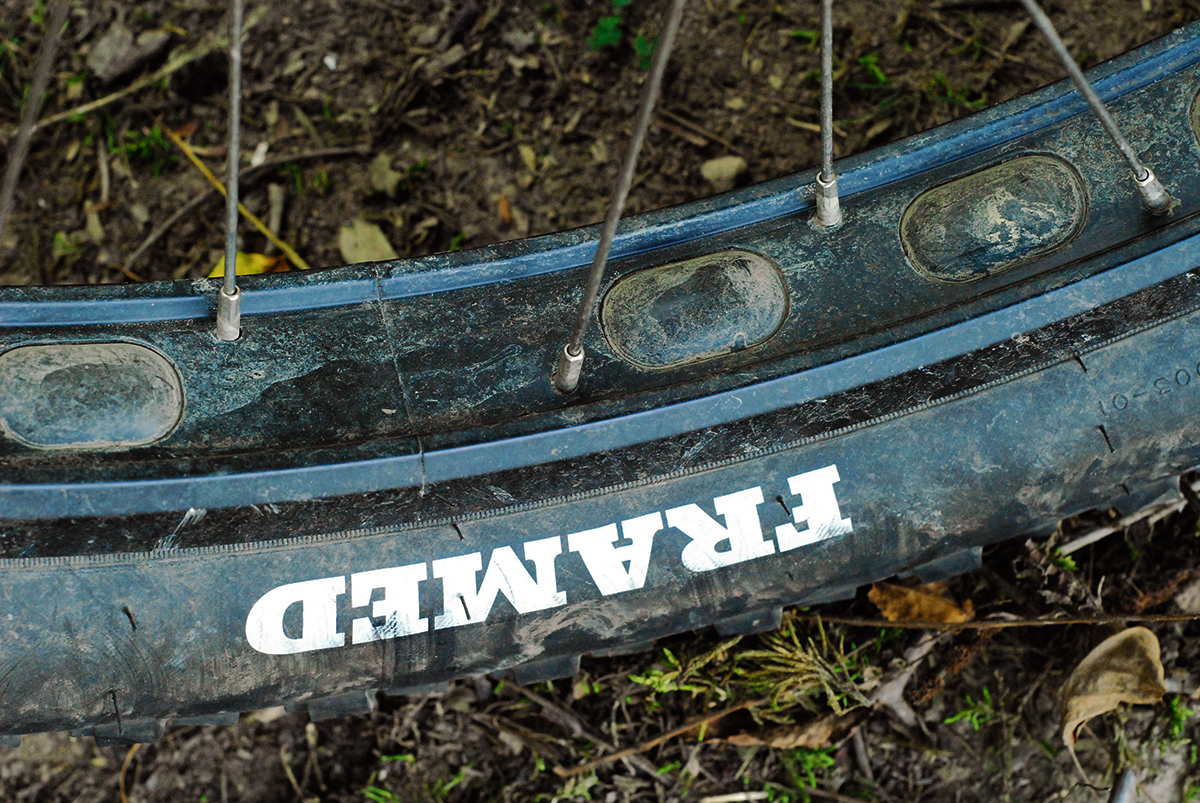 Unfortunately, though the rims are tubeless compatible, the tires are not, so if you want to get rid of those tubes, you’ll have to buy a new set of treads. I’m not really a gram-counter, so I don’t care all that much about the weight savings that a tubeless setup offers, but I do prefer to run tubeless so that I don’t have to worry about getting flats as much. I hate flats. But I must say, I didn’t get a single flat on the Marquette the entire summer, even though I rode it through some pretty gnarly terrain and felt the rim hit rocks on a number of occasions.

While we’re talking about the tires, I need to mention that the rims seem pretty solid. They certainly aren’t the lightest out there, but they’ve remained true and have held up well through the massive beating I put on this bike. I used the Marquette quite a bit at the new bike park at my local trail system, and have gotten a lot better at hitting jumps on it.

The Marquette feels really good to ride, but I did notice some things that could become issues with longer-term use. The derailleur hanger doesn’t seem very durable, and I ended up bending it on my second ride. Granted, I ride some pretty rocky trails, but so do a lot of other people, so that’s just something to keep in mind. Luckily it is replaceable, so you may want to carry a spare, just in case.

I also noticed that the bottom bracket started creaking after about 150 miles, and the interrupted cable housing contributed towards some shifting issues towards the end of my test period, around mile 250 or so.

As I mentioned before, a dropper post would have been awesome, and it’s a bit of a bummer that there’s no internal routing to make it an easy upgrade. It also would be nice if the bike was tubeless-ready right out of the box.

Despite a couple small issues, I found the Framed Marquette to be a really fun bike that is an excellent option for a budget-conscious mountain biker who still wants and needs a decent build to shred on. It’s a good option for beginners because of its affordability and the confidence-inspiring plus tires, but it could find its place with much more advanced riders as well–especially those who want to add a plus hardtail to the fleet but don’t want to shell out a lot of dough. I thought this bike was extremely capable for everything that I ride on a regular basis, from flow trail to never-ending rock gardens to gravel climbs and hair-raising descents. I’d say it’s a “jack of all trades” bike–perhaps not the best at anything, but certainly good for many different types of riding.