“Jack of all trades, master of none,” is the cliche that keeps coming to mind when I think about my experience with the Ibex Asta Pro. But is that a bad thing? Read on to find out! 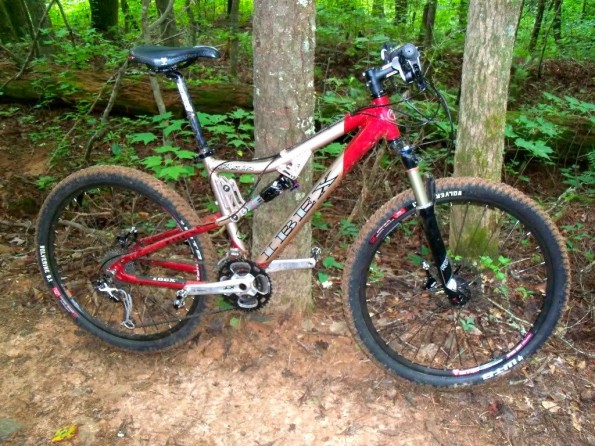 The Ibex Asta Pro comes kitted out with a full Shimano Deore XT drivetrain in a 3×9 configuration. Being something of a SRAM guy, I was interested to see how a full XT drivetrain would perform, as it had been a long time since I’d spent much time with Shimano.

The answer: flawlessly! As many writers have mentioned, XT doesn’t have the same satisfying “ca-chunk” shifting like most of SRAM’s models, but once I got used to the much more subtle feel of the shifts I was completely impressed with the performance. The front shifting especially was bomber every single time, even under considerable load.

I was very thankful that the new Shimano shifters can be shifted with either the forefinger or the thumb, and not just the forefinger like older versions. At first I tried to use my index finger, but I gave up and just reverted to my mainstay SRAM thumb shifting–and it worked just fine! 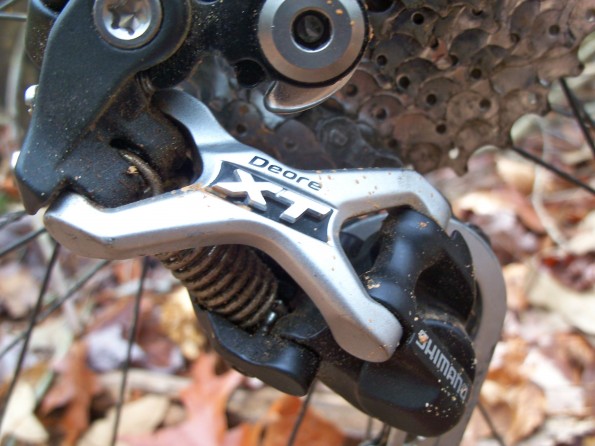 The Avid Elixir CR brakes offer up exceptional braking power in all situations and are also a really great choice at this price point. 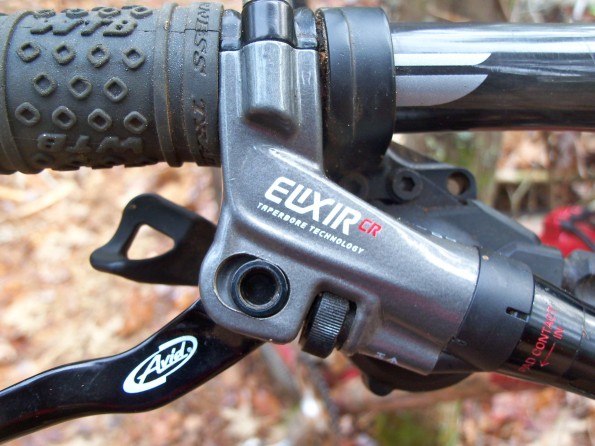 The carbon FSA SL-K bars are a great touch on this bike. I would have preferred a nicer pair of grips, but that’s an easy upgrade. 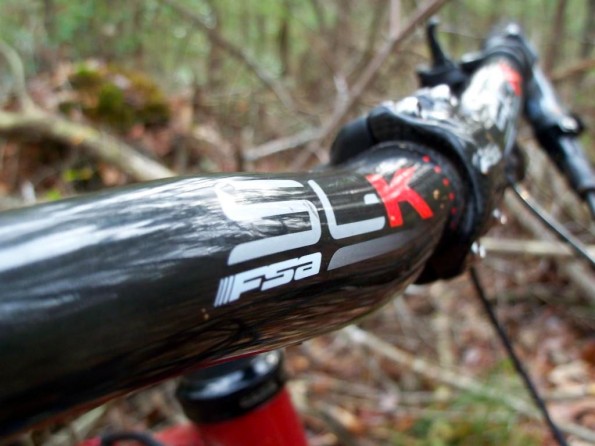 While I think the Asta Pro sports a smart parts kit, I made two small modifications to fit my riding style. In my opinion, one of the biggest reasons to run a 3×9 drivetrain instead of a 2×10 is to have as low of a granny gear as possible, just in case. Unfortunately, the Asta came with a 32-tooth big cog on the cassette, so I switched it out with a cassette with a 34. A 36 might have been even better, but the 34 is more than enough for the majority of the climbs here in North Georgia.

This has proven to be the perfect tire combination for my local riding conditions. The narrower Wolverine in the rear is more than enough for a rear tire and weighs much less than the Bronson, and the Bronson up front is like superglue even in wet corners. For my personal riding preferences and my local trails, the weight sacrifice is more than made up for in extra traction. 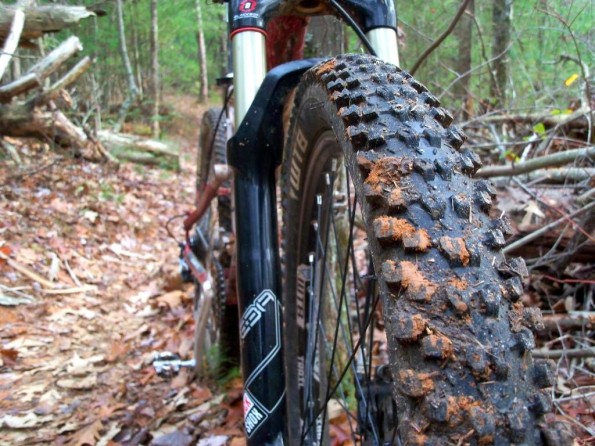 I can try to nitpick all I want, but the fact of the matter is this bike functions really well and the parts spec does a great job of matching the Asta Pro’s intended application.

I’ve had the opportunity to put over 350 miles of singletrack on this bike in a variety of conditions. After spending most of the year getting knocked around on hardtail 29ers, getting a little bit of spring back in my ride has been a welcome relief!

It did take a little while for me to get used to the smaller wheel size again.

Two things are certain: big wheels are much more stable, especially at speed, and small wheels are way more maneuverable. 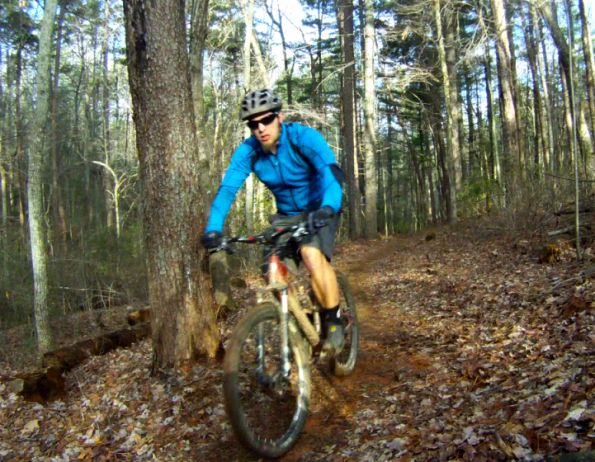 With only 100mm of travel front and back, the Asta isn’t a point-and-shoot machine. Instead, it relies on its small wheel size and steep 71.5 degree headtube angle to provide lightening-fast steering and precise tire placement while navigating rock gardens and webs of roots.

Maneuverability may be the Asta’s biggest asset. Along with the factors above, a relatively short wheelbase allowed me to snake this bike through tight sections and around hard switchbacks with ease. If you regularly ride singletrack that forces you to pedal through tight turns andis fairly rough without being too insane, the Asta may be the perfect rig for you.

At 27.66 pounds, the Asta Pro is pretty light for this price point, and is a capable climber (especially with the 34-tooth big cog). This bike is never going to be an XC race champion, but it’s not intended to be. It’s intended to just shred singletrack. 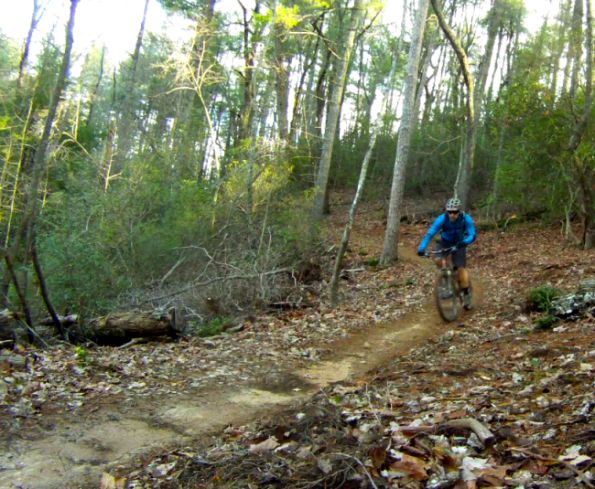 When the trail turns back downhill, watch out: the Asta really wants to open up! The 71.5 degree headtube angle isn’t very slack, but the short wheelbase makes popping this bike off kickers and flicking it around in the air an absolute breeze! While the short wheelbase makes it super easy to pop off jumps and drops, it also works against you on the landings, making them a little squirrellier than they are on a bike with a longer wheelbase and slacker headtube.

At times on really long, nasty descents I would drop the saddle to eliminate the forward cross-country posture and add a little extra pizzaz to the ride.

So is the “jack of all trades, master of none” cliche deserved? I’d say yes–but that’s not necessarily a bad thing! While some bikes do one thing well and totally fail at other applications, the Ibex Asta Pro is intended to be pretty dang good at everything it puts its mind to.

This bike just shreds singletrack, especially really tight trails. It might not excel at any one thing, but who wants to be just one dimensional anyway?

Many thanks to Ibex for lending us the Asta Pro for review.

I like the contrast you mention going from a 29er back to a 26er – not many of us have tried that but it definitely brings the differences into focus even more. Everyone wants to know what it’s like to go from 26 to 29 – now I wanna know what it’s like going the other direction!

A 71.5 degree headtube is pretty XC-aggressive – you’d be hard pressed to come up with a FS 26er on the market with a higher angle.

Yeah definitely. It’s amazing what the maneuverability feels like after coming off of a big-wheeled bike. Of course, most trails nowadays are pretty open and flowy and don’t demand tight maneuverability. I’ve often wondered: has the change in trail building created a higher demand for 29ers, or have the 29ers been changing how trails are built?

The steep HT angle does allow for precise, tight steering but you can’t fully open it up when descending, and the landings on jumps/drops can be a little sketchy.

Nice write up, but I think I would rather give up some $ on components to get a little somewhere else. Like put an SLX crankset and shifter set on to get a lighter wheelset.

@dozzerboy, I guess I would have liked to see the rims upgraded from Speed disc to Laser disc to match the Laser disc hubs, but beyond that these are pretty standard wheels for this pricepoint… hard to complain.

Wondering about the Ibex sizing. What size Asta Pro did you test and how did it fit? I currently ride a 19″ Gunnar Ruffian 29er SS and just rode a buddies 26″ bike and really love the maneuverability of the 26″ compared to my 29er. The Asta Pro looks like a very good option for purchasing a FS bike. I also ride the MTB trails of Georgia since I live in Lawrenceville. Love the local Singletrack available to me here. Really want to know about the size and fit.

Hey man I rode a 16″ frame and it was very comparable to in standover height to other 16’s I’ve ridden. Toptube felt a little shorter than some other 16’s i’ve ridden, but of course a longer and lower stem can easily change how that feels.