Buzzwords and catch phrases come and go with time, but there are three catch phrases that are on fire right now in the mountain bike industry: “27.5,” “enduro,” and “one-quiver bike.” (…not to mention anything with the words “fat” or “plus.”)

Over the course of this review, I’ll explain how the design of the GT Force Carbon Pro either caters to these hot trends, or rejects them. 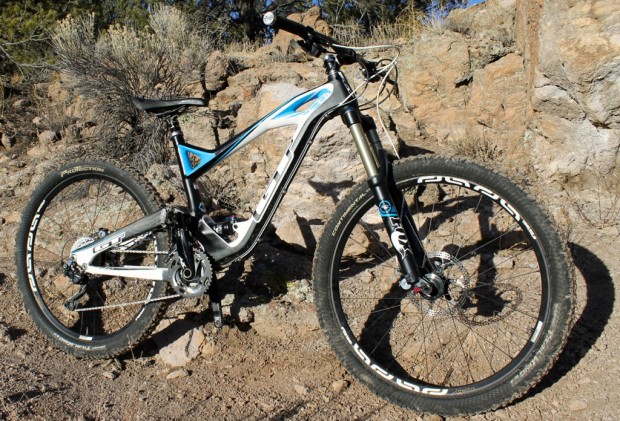 This one is pretty simple, since the GT Force is a 27.5-specific design, featuring the tweener 27.5/650b wheel size. Sure, it’s the hot thing in the market, but I’ve been covering the 650b trend since before everyone started calling it 27.5, and I’ve gone on the record many times with the opinion that the long-travel all-mountain/enduro niche is the perfect spot for 27.5 wheels to rest. The Force occupies this position superbly, as a truly aggressive enduro machine. More on that below.

For more on the bike specs, as well as a detailed analysis of the frame design, be sure to check out my “On Review” article for a thorough break down.

For those who are unfamiliar, enduro racing is a relatively new race format, in which only the descents are timed. However, in order to get to the descents, riders often have to pedal up a significantly long climb. Enduro races are usually held over the course of multiple days, with multiple downhill stages per day, and the cumulative recorded descent times decide who wins and loses. Thus, this race format requires physical fitness, but it puts a premium on bike handling and downhill speed. Since this is how I treat my everyday rides, this format sounds like a ton of fun to me!

For true Enduro racing, GT announced their brand-new Sanction just a couple of weeks ago, which sports 165mm of travel. The stock Force is just shy of that at 150mm. But before the Sanction dropped, the Force was GT’s main enduro-oriented offering, with many riders racing enduro aboard this rig in 2013. And since the Sanction won’t be available to the public until this fall, I bet there will still be plenty of racers aboard the Force this year.

This bike has all the characteristics of a great enduro race rig. Thanks to the 30-pound weight, 3×10 drivetrain with a super low granny gear, and the fantastic Fox CTD suspension, I was able to easily dial down my suspension, drop gears, and climb, climb, climb on this bad boy. Once at the top of the climbs, just open that suspension up, drop the post, shift up, and get ready to rip! In fact, I’ll be racing the entire Big Mountain Enduro series this year, and unless something changes between now and then, I’ll probably be racing it aboard the Force! Stay tuned for more info on how it rides in a real-life enduro race.

For some reason, riders these days seem to be searching for the elusive “one-quiver bike.” With bike weights dropping, suspension getting better and better, new-and-improved drivetrains, and the venerable dropper post, we are undoubtedly getting closer to the ideal one-bike-for-everything. However, searching for a true quiver killer is like searching for the fountain of youth: it will prove ever elusive.

Now, there are plenty of companies who are trying to find the perfect middle ground that will allow their enduro rigs to do both equally well, but when I ride the Force, I think that GT realized that they could create either a bike that climbs well, a bike that descends well, or a bike that does both moderately well, but neither really well. So, their solution was to create one bike that climbs extremely well, and one bike that descends extremely well. The Force is undoubtedly the descending-oriented rig (with the Sensor as the climbing-oriented bike). This Force just isn’t a one-quiver bike… and that’s a good thing!

While I am unabashedly a 29er fan, I’ve admitted that I would way rather ride a 650b rig than a 26er nowadays. After coming off  a recent review of a fantastic 29er all mountain rig, I was a little unsure how the Force would stack up. However, there is at least one department that the 27.5 wheels truly excel in, and that is cornering. Cornering on the Force is unreal, due in large part to the spot-on geo, and also thanks to the smaller, more maneuverable wheels. Also, the awesome stock tire choice of the 2.4″ Continental Trail King tires is incredible! I love these kicks so much that I might have to write up an entire article for them alone, so stay tuned.

In short, when descending on a bike that is actually pedalable, (aka barring full blown DH rigs), the GT Force is one of the most confidence-inspiring bikes I have ever ridden. There is no question in my mind that when descending, this bike can tackle far more than I am personally capable of. And to me, that’s a good thing in an aggressive bike!

I mentioned above that this bike can climb plenty well for enduro races, and that’s totally true: I’ve logged several 30-40-mile, mostly XC rides on this bike, and it’s been more than manageable. However, don’t expect it to climb as easily or as confidently as a bike with steeper geometry. But since this bike is so capable in its stock form, it made me think: are there any adjustments that could radically transform the way this bike rides?

The one thing that could truly help the handling on the climbs is a steeper head tube angle. And while the stock 150mm Fox 34 Float Fork is great, the lack of travel adjust is a little unfortunate. Thankfully, I had the opportunity to install and test a new 160mm 2014 Fox 34 TALAS with travel adjust.

This fork did indeed transform the way the Force rode! The 10 extra millimeters of travel made it even burlier and more aggressive on the descents, but a quick flip of the lever brought it down to about 140mm on the climbs, meaning that the head tube angle was steeper and more controllable while climbing. With the installation of one fork, the Force got both more aggressive on the descents AND more reasonable on the climbs. It’s like magic!

Also, if you purchase a Force and then decide that you want a little speedier, more trail-oriented rig, the tires and wheels are a good place to look for a change. While the 2.4″ Trail Kings offer unreal traction, they’re heavy and slow when it’s time to pedal. Also, while the stock e13 wheels were pretty reliable, they are by no means lightweight.

So if, at some point in the future you want to change things up, there are plenty of ways you could tweak and modify the Force to make it fit your local trails, conditions, and your riding style.

I have no major gripes with the frame or the bike as a whole, but there are a couple bones I have to pick with the stock component spec. Normally I wouldn’t care as much about the components hung on a rig, but since there are only two build kit options (both with relatively similar issues), GT, in my opinion, just doesn’t offer enough build kit options for the wide array of riders that are out there. At the very least, a frame-only option to allow riders to truly build their dream bike would be a smart idea.

In the On Review article I mentioned having some issues with the brakes. After some maintenance, the brakes are now performing reliably. While maybe they aren’t my favorite set of brakes, after a little upkeep they’re currently getting the job done.

The thing I really have the hardest time wrapping my head around is the drivetrain. For a bike that is seemingly so aggressive and descending-oriented, it seems quite unusual in this day and age to spec a 3×10 drivetrain. Sure, this drivetrain has allowed me to spin up some of the steepest climbs, but even with a clutch-style derailleur I’ve had to combat dropped chains and undue chain slap. If it was me, I’d at least have a 2×10 on here and/or a chain guide. But with this bike’s disposition towards downhill gnar, I think a 1×11 drivetrain would be ideal for this application. It would provide much better chain retention, a simpler overall setup, and better rock clearance

However, despite mentioning those small gripes with this current rig, it seems like GT has gotten on the same page: their new enduro killer, the Sanction, is a single ring-specific frame and will be available with a frame-only option, to allow absolute customization.

The GT Force Carbon Pro is an enduro force to be reckoned with as it blasts down absurdly technical descents with nary a thought for the terrain it travels over. While it may sacrifice a bit on the climbs in exchange for descending prowess, that’s intentional. The Force is unabashedly all about descending, and it is unnervingly good at it.

Many thanks to GT Bicycles for providing the Force Carbon Pro for review!