The LH Thomson Company, simply known as Thomson to most cyclists, is located in Macon, GA and has been around for over 30 years in one form or another. It’s founder, Ronnie Thomson, opened a contract machine shop in the 1970’s and it was eventually purchased by Boeing. After a few months he decided he wanted to be his own boss again and started the modern LH Thomson Company. Ronnie ran the company until he passed away in 2008, and his son now runs the company.

Today Thomson has two sides of their business: contract machining and cycling components. Most of their work, about 65%,is contract machining, mostly for the aerospace industry. Their clients include Boeing, Cessna, Gulfstream, and Trane justto name a few. The other 35% of their business is cycling components: seat posts, stems, and seat post collars. I had a chance to visit their factory recently and head bicycle marketing man David Parrett gave me a tour and told meabout the history, and future, of the company.

HOW THEY GOT INTO CYCLING

In the early 1990’s Ronnie’s daughter was on the cycling team at Carnegie Mellon University and during spring break she brought the team home to Macon with her so they could ride. Ronnie had been looking for something to produce under his own brand and two of his daughter’s teammates told him seat posts were a place he could make a difference in the cycling industry. As it happened, one of those teammates was Gary Klein’s neighbor, and one thing lead to another and in 1995 Thomson seat posts were being spec’d on Klein bicycles. David describe this as “the best advertising you could get” at the time. The first stems were produced in 2001 while the seat post collar just came out a little over a year ago. 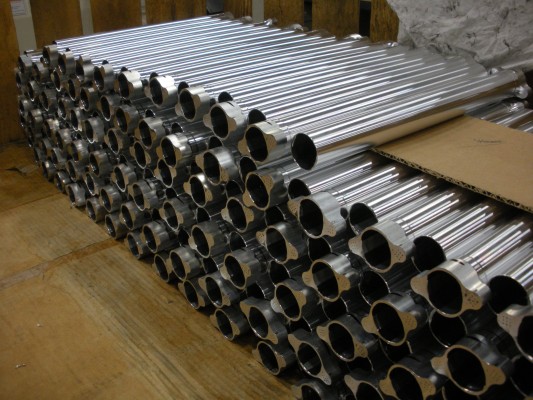 Seat posts part of the way through production.

Thomson’s reputation for super high qualityis a result oftheir involvement in the aerospace industry and their refusal to put anythingto marketuntil it meets their high standards. For example, they spent over three years developing the seat post collar! All the quality control practices and proceduresthey use on their aerospace work is also used on their cycling components. Every single part is checked for dimensional accuracy and cosmetic imperfections after each machining process. Several parts from eachmaterial lot are put through destructive testing to verify the quality of the raw material and machining work. They test for both ultimate strength and fatigue life. 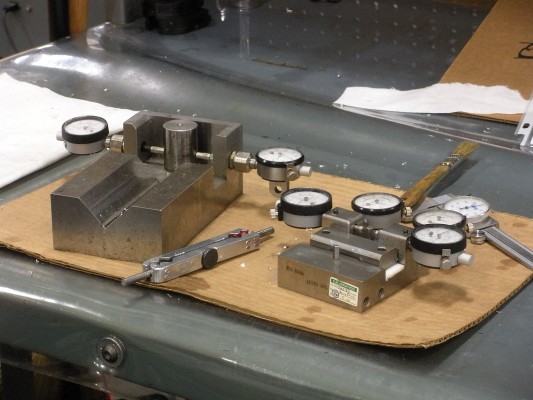 A fewjigs used to check a part after a machining process. Thomson produces all of their own jigs.

MADE IN THE USA

All Thomson parts are 100% made in the USA. The raw ore comes from Canada and is extruded into their custom shapes in Minnesota. The seat rail clamps are forged in Cleveland, and the bolts are produced in Chicago. They do all of the machining in their plant in Georgia and then send the parts to Pennsylvania for anodizing. Once the parts are back in Georgia, Thomson uses a CO2 laser to apply their logo, they put all the parts together, and ship them out. The only thing that doesn’t come from North America is the bag the parts ship in which comes from China. 🙂

Due to their reputation for quality, cyclists have been clamoring for more Thomson products for years. However, simply keeping up with new standards keeps the company pretty busy, coming out with new size offerings for existing products and all of the manufacturing and inspection jigs required to produce them. Currently they’re working on a 75mm 1.5″ stem, a 55mm direct mount DH stem, then a 40mm direct mount, and a new 36.4mm seat post collar for Trek. They’re also working on a quick release version of the seat post collar. 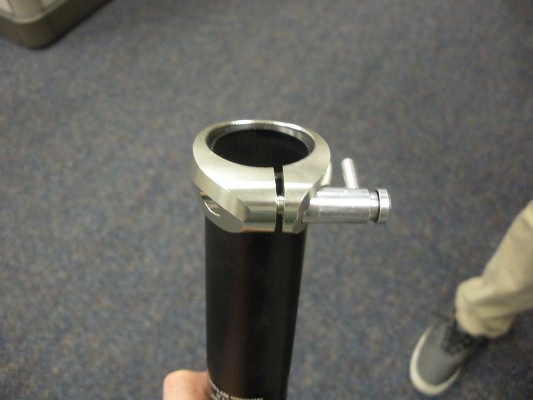 One part in particular customers have long requested is a Thomson handlebar. They have been listening, and should get their first batch of prototypes in the next week or so. I wasn’t given too may specifics, but here is what I do know: it’s a flat mountain bike bar and it’s made of titanium. David told me “titanium isn’t the only answer to the handlebar question, but it is one answer.” He expects an aluminum bar to follow. He also said they will start experimenting with carbon fiber in the next few years which is necessary to stay competitive in both cycling and aerospace. They’re already doing some machining on carbon aerospace parts.

Here’s a collection of pictures I took while in Macon, be sure to click for larger views.

I’d like to thank David Parrett and all the other good folks at Thomson for spending a few hours to talk to me andshow me around the plant. To learn more, check out theircycling website. 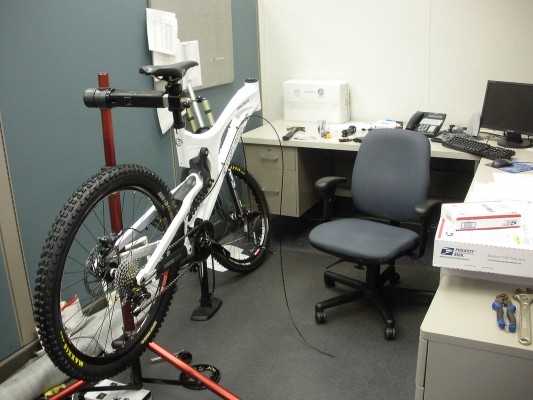 David’s cubicle, getting a DH project bike put together. This bike will be traveling to a few events, including Crankworx, to show off Thomson’s new direct mount DH stem. 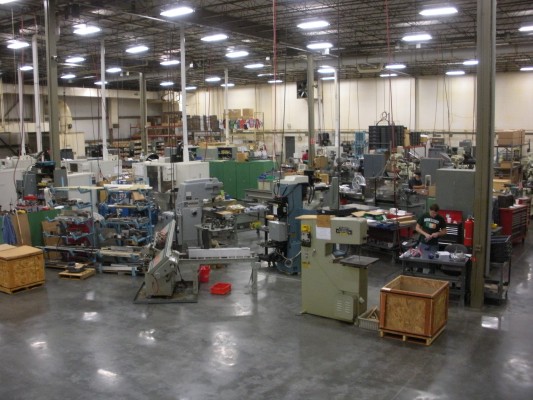 Looking out over part of the plant. Note how clean it is. 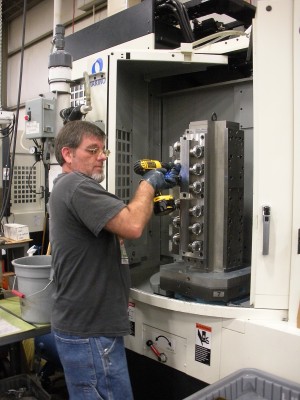 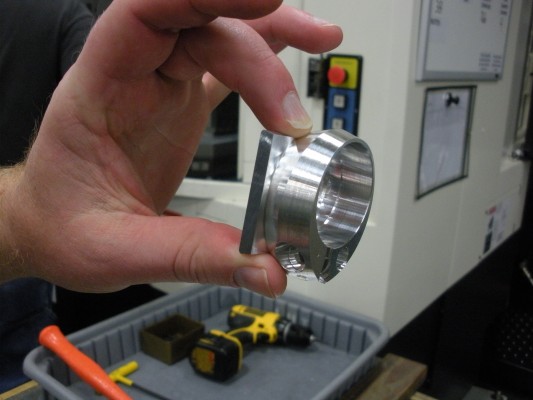 The collar after the first machining process. 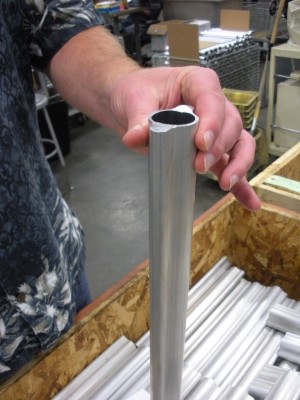 This is how all the seat posts begin life – as a custom shaped extrusion. This allows Thomson to make the post out of one solid piece for more strength and less weight. 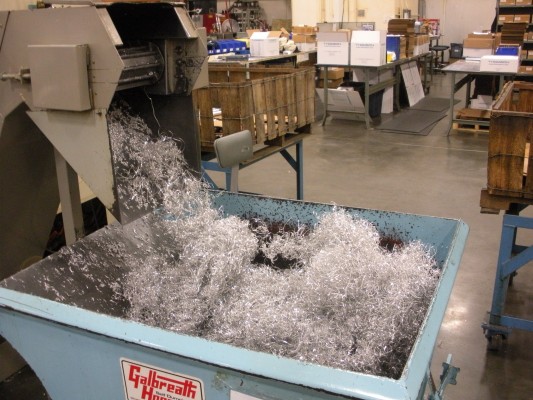 All shavings, chips, and scraps are collected and then sold to a recycler. 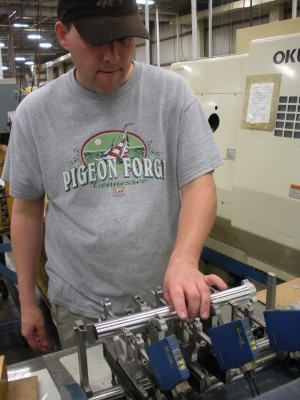 Checking a seat post after the first machining operation. 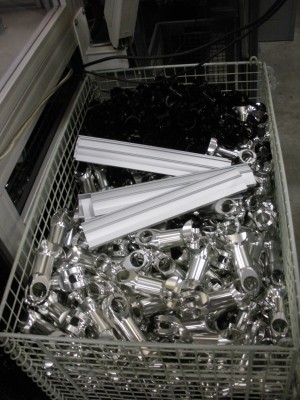 Rejects – parts that didn’t meet Thomson’s standards. Many of these had problems with their anodizing, tiny spots I would have never even noticed if David hadn’t pointed them out. They are really picky about what goes out the door. 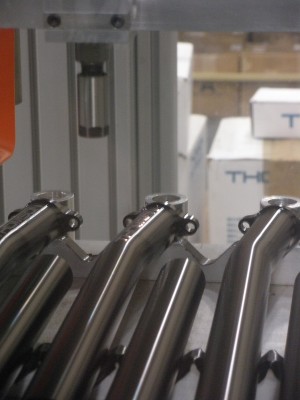 Hard to see, but this is the CO2 laser applying the logo. 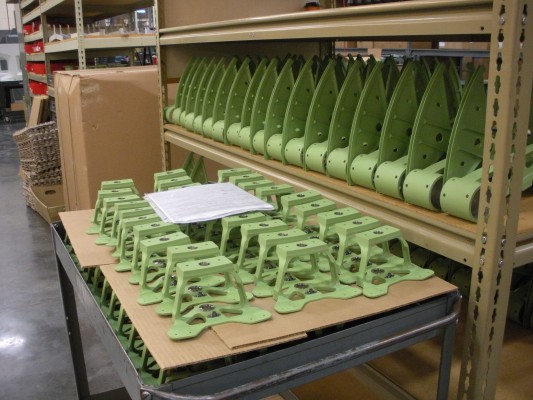 Aerospace parts waiting to be shipped out. The small parts on the table each weighed about 1.5lbs each and were produced out of a solid 31lbs chunks of billet steel. 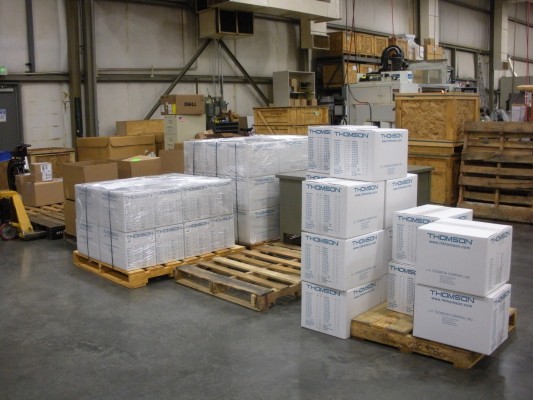 Completed parts boxed up and ready to shipped to distributors all over the world. 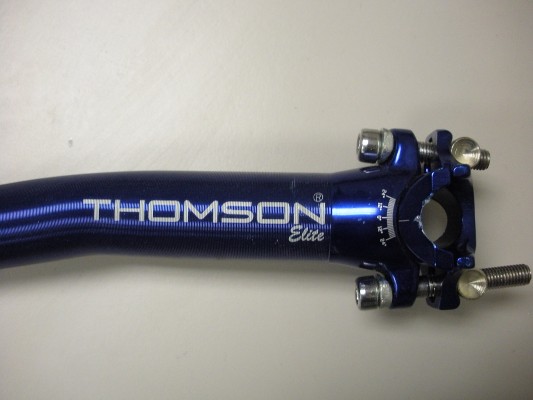 This is a knock-off Thomson seat post found on eBay. Other than a very few special edition parts, Thomson products only come in black and silver. This fake one got the logo right, but the head and clamp is all wrong. In fact, this is a two piece part, the head is pressed into the post. 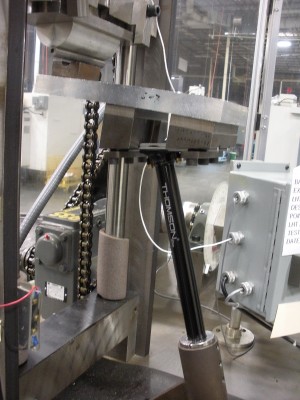 A seat post ready to be tested for ultimate strength. A hydraulic press applies pressure 6″ behind the clamp until the post fails. 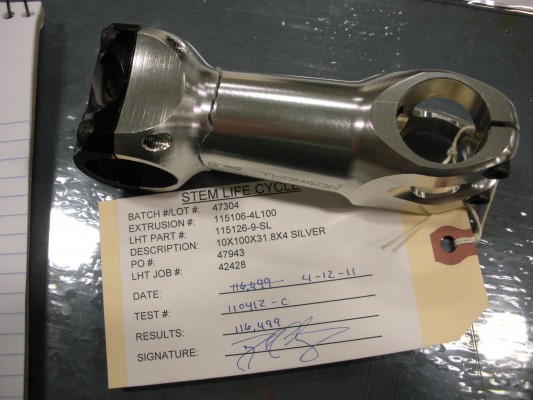 A stem after a fatigue test. This one survived 116,499 stress cycles. Thomson’s minimum standard is 80,000 cycles. When deciding what they wanted the minimum requirement to be they doubled the average life of other cycling components they tested.

Thanks for the virtual tour, dgaddis! The attention to detail is impressive!

Yeah, great story. I didn’t know they were “right down the street” in Macon. I added one to my bike after the post that came with the bike started to bend. Since I value my scrotum I decided to spring for the best!