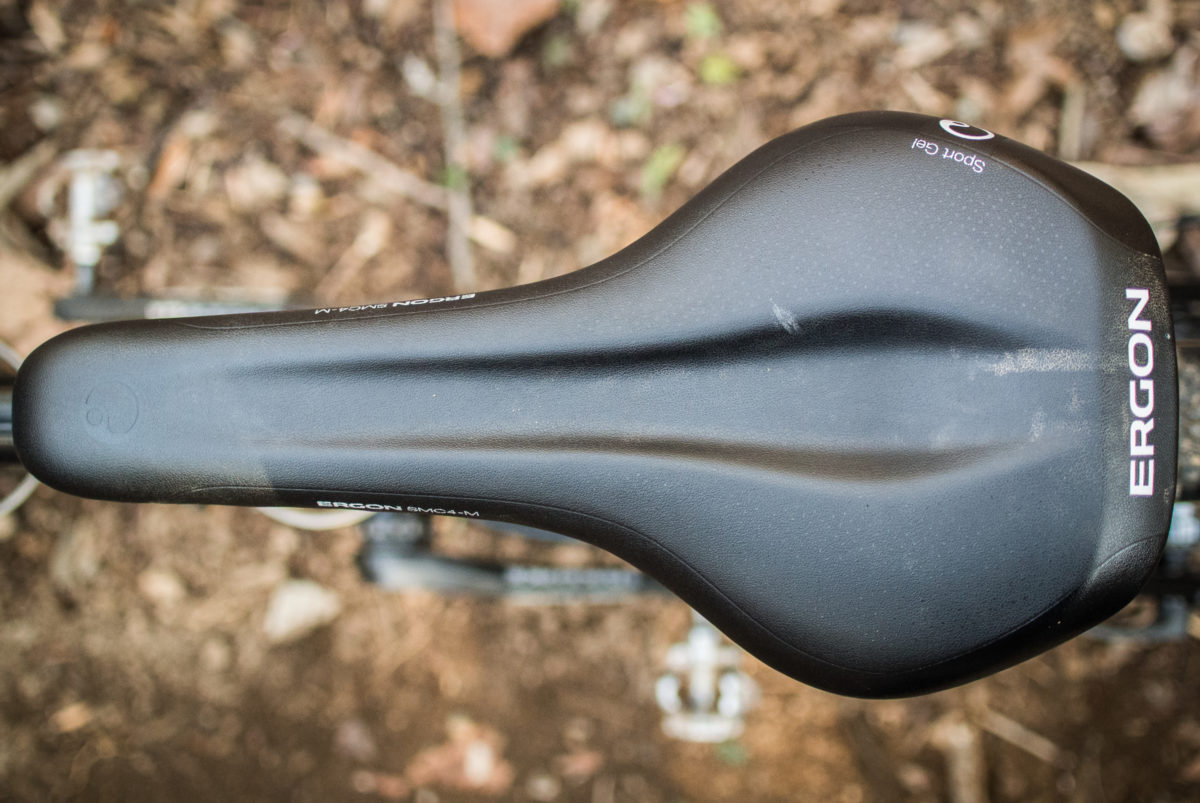 For over a decade, I’ve had a “go-to” saddle. It’s gone on all my bikes – mountain, road, cyclocross, whatever. Of course I tried other saddles during this time, many of which were comfortable, but not enough to replace my standard perch. However, over the past season or two, my go-to and I have been drifting apart. I’m not sure why, but my butt just doesn’t get along with it like it used to.

With the Huracan 300 bikepacking race in Florida looming on the horizon early this year, I knew I needed to make a change. After all, if I was getting a numb bum after just a couple hours on the bike, how was I possibly going to make it through 340 miles?

I got in touch with Ergon and they suggested one of their SMC4 saddles for the endurance riding I like to do. I received the saddle a few weeks before my trip to Florida, slapped it on my hardtail, and I’ve been riding it since. All told, I have logged over 500 miles on this Ergon saddle since January – plenty of time to formulate an opinion.

Ergon offers three different models of the SMC4 saddle – the SMC4, the SMC4 Sport Gel, and the SMC4 Comp Gel. Each model is available in one of two widths: medium or large. I tested the SMC4 Sport Gel in medium width. From tip to tail, the saddle measures 285mm long, and it’s 145mm wide at its broadest point. The large size of the saddle is the same length, but is 10mm wider than the medium. In the center of the saddle is a 9mm deep relief channel, which Ergon says helps protect your soft tissue down there.

Which width is right for you? Well, that depends on your sit bone spacing. Ergon has a handy saddle selector on their site where you input what type of bike you ride along with your terrain and sit bone width to come up with a recommended saddle. If you don’t know your sit bone width, you can input your height, weight, and hip circumference, and Ergon will make their best guess.

The Sport Gel I rode has a nylon composite shell, CrMo rails, a microfiber cover, along with orthopedic foam and gel for padding. Weight is around 300g which is a good bit heavier than the racier saddles I’m used to, but that’s the tradeoff for the substantial padding. Despite that cushy padding, the SMC4 still manages to strike a sporty profile. It’s relatively flat and thin, which prevents it looking like something snagged off a stationary bike from the local YMCA.

Retail pricing for the saddle I tested is $80.

Mounting the saddle up was straightforward… because it’s a saddle. The Ergon is more than 10mm longer than my previous saddle, so I did need to slide it farther forward comparatively. Over the course of my first few rides on the SMC4, I continued to edge it forward until my hips were in an ideal position for pedaling performance.

Its broad, squared-off rear provided ample seating room, and the microfiber cover was easy to slide around on as needed. The saddle has a long nose, but it stays fairly wide throughout its length. This kept things comfortable on extremely steep pitches where I needed to slide all the way to the tip.

I found the combination of foam and gel padding to provide excellent support and comfort without being too soft and squishy. It took me 60 hours to complete the Huracan, 30 of which was ride time. My butt did get numb during the second day, although that section of the route was mainly on pavement, which meant lots and lots of sitting and spinning. On the singletrack sections where I was standing up more often, I didn’t experience any numbness. Keep in mind that this was well over 200 miles into the route, which is probably a bit longer than your average mountain bike ride. Regardless, my butt fared much better than my hands, which are still tingling weeks after.

Personally, I didn’t have any issues with the SMC4. In fact, I could see putting it on my road bike, or any bike that will see lots of miles. That said, there are a couple potential issues worth mentioning. First off, the rear of the saddle is very broad. This makes for a cozy place to sit, but I could see it being a hindrance to getting back behind the saddle on steep descents. I didn’t experience this particular issue because I ran it on a dropper post. Ergon angled the trailing edge of the saddle so sliding off may not be a problem, but getting back on could be more difficult, especially with baggy shorts. The second issue was brought up by a very tall (6′ 7″) friend of mine. He has the same saddle and told me that when it’s dropped, the pointy corners of the saddle bang into his legs uncomfortably. Again, not something I experienced, but I’m 6′ tall.

The Ergon SMC4 Sport Gel won me over with its large, comfortable seating area and racy look, despite the extra grams it carries. Upgrading to the TiNox-railed SMC4 Comp Gel will shave about 20g off, but it also adds $20 to the price. However, when other high-end saddles are selling for $150-$200, Ergon’s offerings look all the more attractive.

If you lean towards the endurance side of mountain biking, the Ergon SMC4 could be your butt’s new best friend.

Thanks to Ergon for providing the saddle for review.

Trails
Trail Flow: Copper Mountain adds Pump Track, Adaptive MTB Trail...
Gear
The We Are One Arrival Is a Mid-Travel Bike With...
Gear
We Tested 5 Tubeless Tire Sealants to See Which Ones...
Trails
An Intro to Bikerafting: How it Works, and How to...
Subscribe
Login
Please login to comment
0 Comments
Inline Feedbacks
View all comments
Tags: Gear | ergon, Gear, review, reviews, saddle, smc4
First published April 11, 2017 @ 4:00:18