I met Johnathan Tisdale (known to most as JT) the summer of 2009 at the Canal Crown Time Trials, a local grassroots race series I help organize. I didnt know anything about him except that he seemed like a nice guy and he was a beast on the bike he dominated all four races and no one else even came close. In fact, three years later, his course record has yet to be broken. Later I learned that he was fighting a much tougher battle than any mountain bike race: he had a brain tumor. It had been discovered in 2007 when he passed out at his parents house and doctors estimated it had been there for over a decade! 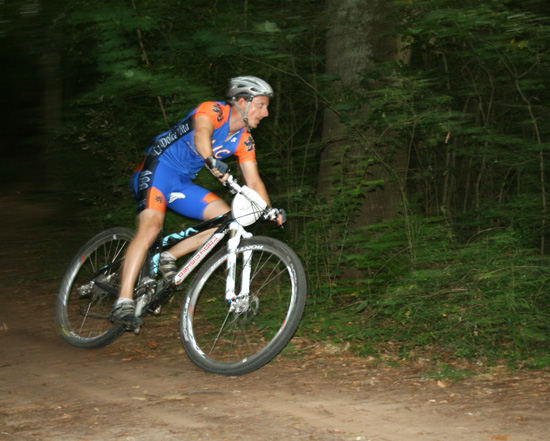 Johnathan on his way to winning the inaugural Canal Crown.

After the discovery of the tumors Johnathan went through several rounds of chemo, radiation, and even brain surgery. He and his family used CarePages to keep their friends and family up to date on how things were going and I was one of many people following him. CarePages gave the world a view into his familys life through these hard times, and they were a hugeinspiration to everyone following them. Their faith in God and love for one another was unwavering, never giving up, and always keeping a positive attitude.JT never stopped living his life to the fullest. He completed the Leadville Trail 100 in 2009.He showed up at a local metric century MTB race a few months after brain surgery and was the lead rider at the halfway point! Once he was cleared to drive again after the surgery he and a few friends drove across the country to take their off road buggies rock crawling in New Mexico. When the tumors came back he rode his bike tohis radiation treatments.

The tumors came back more aggressively however. Every time radiation would get rid of one tumor another would spring up. Eventually he wasnt able to do any more. One morning in late June I read the following on his CarePage:

He was only thirty seven years old and he left behind his wife Amy, a5 year daughter Caroline, a7 year old son Whitt, his parents, and his sister. It was a sad day in Augusta. 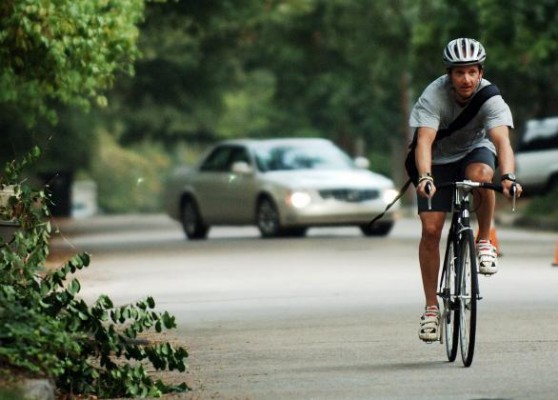 Johnathan was a big part of the local cycling scene, both on and off the road, and had many friends. His fight and passing touched many lives, more than he probably ever realized. The community pulled together to show love and support for his family. A memorial ride, PedalWith Purpose, was hosted to raise money for his children’s education fund. Money left over from the Canal Crown was also donated to the fund, in honor of the first Canal King. The memorial ride had well over 200 participants and raised over $30,000! 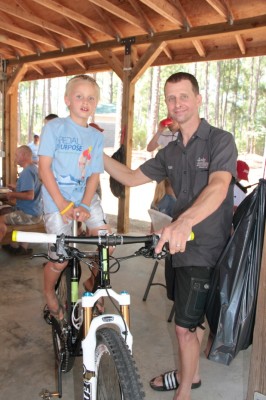 Nate and Whitt pose with the first Tisdale Hardtail at the Pedal With Purpose memorial ride. Photo: Arnold Barrett

Greig McCully was a long time friend of Johnathan:

I met John when I recruited him to replace me when I left PSS to start my own business. It is what moved he and Amy to Augusta, GA. We became instant riding friends and maintained a business and personal friendship until he passed. When he had issues at PSS he would often call me to discuss his strategy and the customer. I appreciated him reaching out to me and how good a job he did with the territory I had started. He did a better job than I ever did and that’s all I could have asked of him.

After Johnathans passing Greig wanted to do something special in his memory. He talked with Nate Zukas of ZukasCycles and together they came up with the Tisdale Hardtail.

I thought that Nate being a local builder and a friend of JT it would be a great way to honor him and create a living legacy all the while creating a future stream of donations to his family. Nate agreed to give a portion of all builds of the frame to the family. I went to Amy and made sure the bike was one that he would have loved. 29er, hardtail and colors for example. Nate offered most of the design as he knows it so intimately and then we discussed the name and the use of JTs name.

All Tisdale Hardtails are steel and custom built specifically for the buyer. Nate chooses the tubing diameters, thicknesses, and frame geometry to suit the rider’s weight, riding style, and fit as well asdesired handling and ride feel. Greig’s framehas a luggedbottom bracket and seat tube/top tube junction – something extremely rare on 29ers. All other joints are fillet brazed. Fillet brazing is a much more time intensive way to join tubes together compared to TIG welding, but it produces beautiful seamless joints that look like everything is one piece and it doesn’t create a weakened heat-affected zone like welding does. You don’t see fillet brazed mass production bikes due to the time involved and the fact that so much of it has to be done by hand. Nate estimates that he spent eight hoursonthe head tube junction alone. Before paint the frame weighed just a touch over 4lbs. 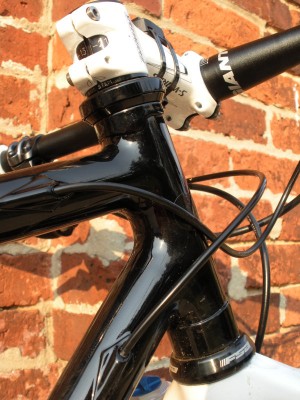 All shift cables and brake hoses are internally routed for an uncluttered and clean look. The seat stays are bowed just a tiny bit to allow for a littlegive to improve comfort. The dropouts are made by Paragon Machine Works and mount the rear brake between the seat and chain stays.Greig wanted an agile,fast handling bike, so with the fork saggedto around 20%his frame has a 72 head tube angle and 73 seat tube angle with fairly short 17.125 inch chain stay and 2.2 inch bottom bracket drop. Nate does his own paint as well, and I really dig the black with lime green accents on this bike. There are no decals on the frame: it’s ALL paint. Greig had it built up with nice high end parts: Fox fork, American Classic wheels, 2×10 SRAM X0/X9 drivetrain, Hayes brakes, etc. The result: a stunningly beautiful 25.88 lb. one-of-a-kindfun machine. 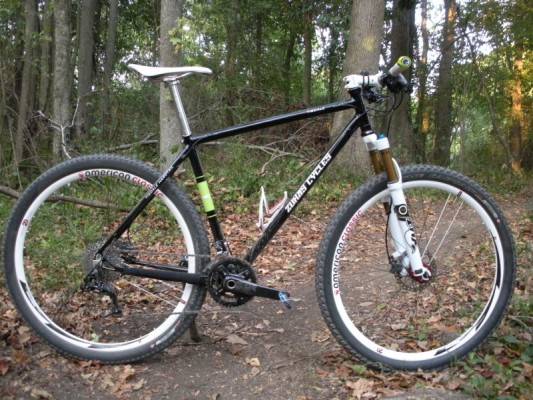 The geometry on Greig’s frame is ideally suited to tight, twisty singletrack.

Greig was kind enough to let me borrow the bike for the weekly Wednesday night canal trail ride from the bike shop. It didn’t fit me perfectly, but I didn’t expect it to: it wasn’t built for me.As soon as I dropped into the trail I realized it was a super smooth riding frame.I mean, really smooth.Chatter and ripples in the trail could hardly be felt through the saddle. In fact, I couldfeel small bumps and chatter through the bars more than through the seat! And it’s got a bigger tire with less air pressure and a suspension fork up front! With a littlefine tuning of the front tire’s air pressure I could have had the bike riding likeit was on a cloud.

With that kind of a ride I expected it to feel a little noodley whenreally mashing on the pedals out of thesaddle, but that wasn’t the case. It had less flex than my Jabberwocky (also a steel 29er frame), yet itstill rode better. The short chain stays were great: tons of traction climbing, excellent turning into corners, and it was really easy to pick the front wheel up. The short rear end coupled with the 72 head tube make this bike a singletrack carving machine – it slices and dices through fast back-to-back corners like a hot Ginsu knife through butter. Needless to say, I really like it. If it had fit me better Greig would have had a hard time getting it back from me. 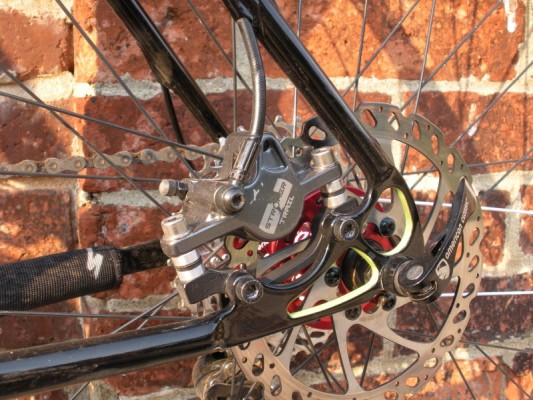 The rear triangle is tidy thanks to internal cable and hose routing and chainstay mounted brakes. The lime green accents in the cutouts add a splash of color.

How To Get One

The Tisdale Hardtail is only available through Zukas Cycles. All are full custom and built to order. The frames are $1,350, 10% of which is donated to the Tisdale Children Education Fund. Included in that price:
-Custom geometry, typically using Columbus and/or True-Temper tubing
-Lugged (if they work with geometry) and fillet brazed construction
-Paragon low mount dropouts
-Internal cable and hose routing
-JT cutout on bottom bracket
-Stock paint scheme, custom colors, all paint, no decals 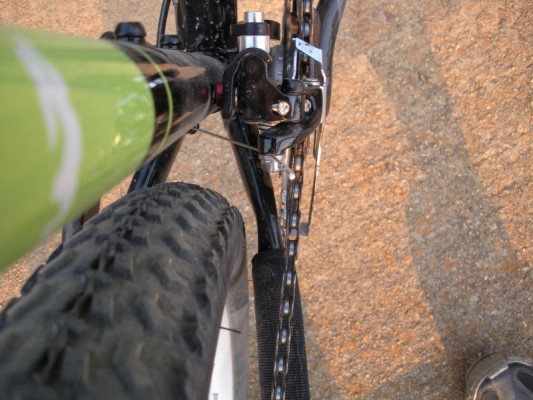 If you’ve ever priced handmade steel framesyou’ll quickly realize that the Tisdale Hardtail is a bargain – it’s cheaper than many non-custom TIG welded frames, and has more ‘upgraded’ features like lugs and internal cable routing. And part of the money goes to helping the family of a fellow member of the mountain bike tribe. 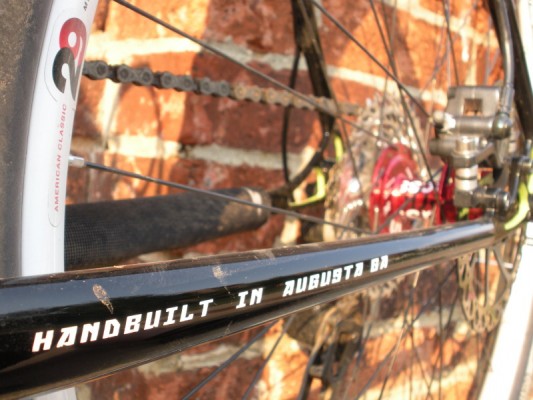 That’s not stickers – it’s all paint.

If parts to complete the bike are purchased through Andy Jordan’s Bicycle Warehouse (where Nate has worked since1991) a portion of those proceeds are also donated to the Tisdale family. You can get in touch with Nate via the Zukas Cycles website, Facebook page, or call AJBW and ask for Nate. 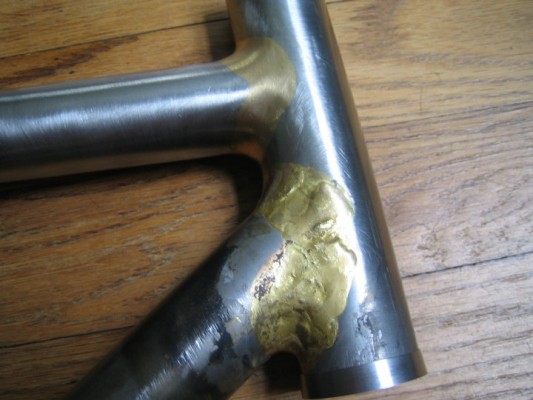 This is why fillet brazing takes so long. The lower joint hasn’t been cleaned up and smoothed out; the upper has. Machines can’t do that. 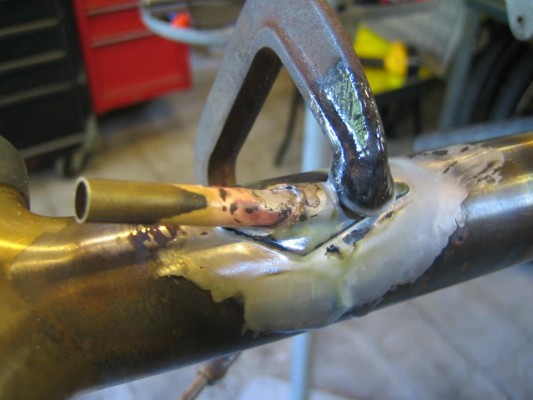 Brass tubes are brazed in place for the internal shift cable and brake hose routing. 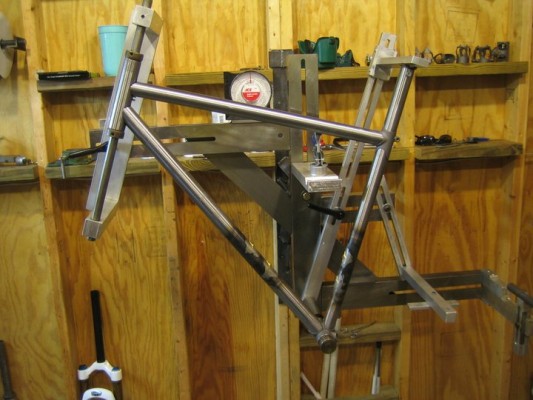 The main triangle’s tubes mitered and ready for joining. 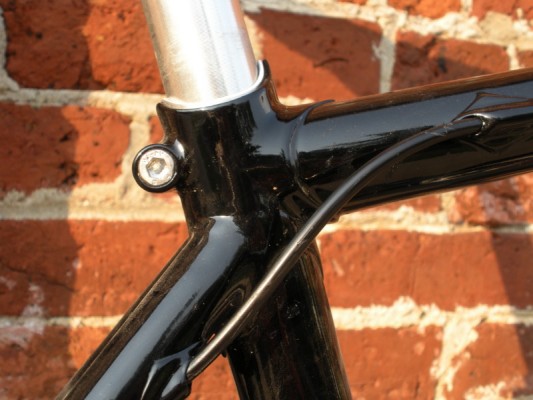 The top tube and seat tube junction are lugged, the seat stays are fillet brazed to the lug. The seat post clamp is integrated into the lug. 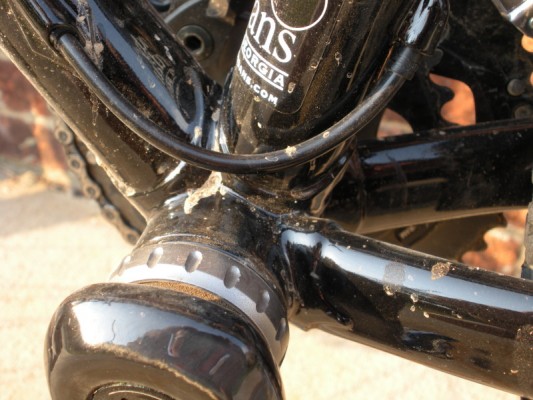 The bottom bracket is also lugged, which makes for a strong and stiff joint. Lugs won’t work with all geometry however. 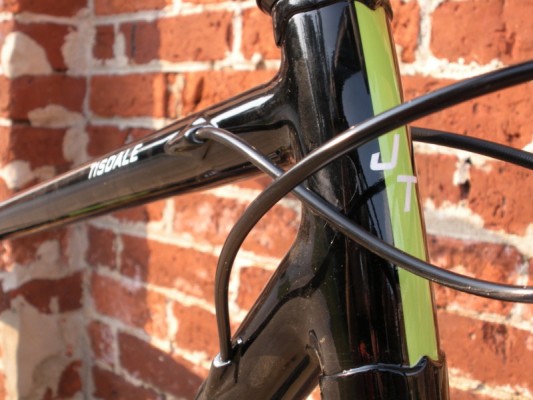 Another view of the smooth head tube junction. The cables/hoses run through brass tubes inside the frame. Reinforcement rings were added to the top and bottom of the head tube for added strength.

Seat tube detail. At the risk of sounding like a broken record, there are no stickers on the bike. Nate has been doing custom paint jobs for a while, and he’s good at it. 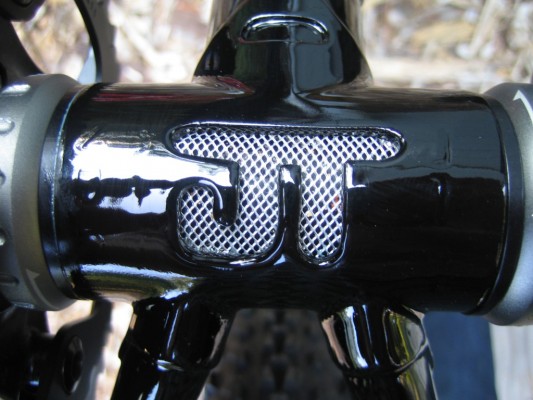 The large “JT” cutout on the bottom of the bottom bracket will keep water from building up in the frame, but the mesh will keep gravel and rocks out. 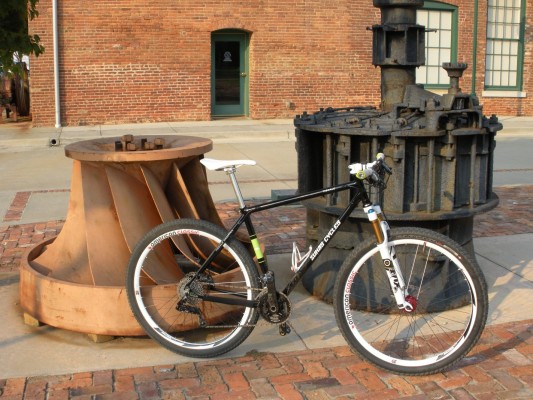 Greig described the bike as: “Pure JT. Very fast, climbs like a goat and still takes it easy on the rider.”

Thanks to everyone involved in helping put this post together: Amy Tisdale, Greig McCully, Nate Zukas, John Phelan, and Arnold Barrett.

Wow, clearly JT was an amazing guy. Such a loss to the MTB community!

Seeing this bike is making me reconsider buying a new FS 29er this fall. I love:

– The paint and painted graphics
– The bottom bracket cut out and grille
– Internally routed cables!
– Steel frame and the incredible brazing work
– The clean dropouts

Plus it’s fully customizable. Man, Nate is giving these things away!

Wow, what a nice custom bike, and such a worthy cause too.

For comparison, this is only $100 more than a tig welded, powdercoated Waltworks custom. Fillet brazing is extremely time consuming, and the custom paint is a nice touch. This is a great deal for a custom frame!

Every time I saw JT, canal crown and at FATS, he always had this huge smile on his face. Beautiful bike and a wonderful tribute to a fine person.

Dustin, You nailed it with this. It was a great article about a great person and a completely unique gesture. Nate created a beautiful bike, JT would have loved it, and Greig is going to thoroughly dig it. Great job. Thank you for telling this story! – Randy