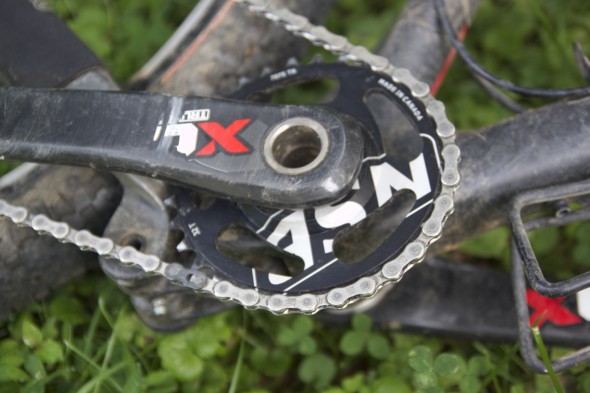 If you’re like me, you’ve been drooling over the 1×11 drivetrains from SRAM–then reality sets in. Sure, the gear itself is expensive, but honestly it’s also a lot of work to convert your existing drivetrain. Not only do you have to replace the chain, crank, cassette, shifter, and derailleur, most folks will also need a new rear wheel hub to mate with the cassette–which means either a new rear wheel or at least a full wheel rebuild. Whoa.

I’ve been riding 1×9 on my hardtail 29er for several years now, and I love it–so much so that this bike is generally my go-to ride. But that has meant my fancy carbon Santa Cruz Tallboy just sat in the shed for most rides. I had to see if swapping out the drivetrain would convince me to ride the Santa Cruz more often.

The SRAM X0 2×10 drivetrain is really slick and I’ve run it in a few different configurations, swapping the group between both of my bikes. I’ve run X0 2×10 with grip shifters and even mated it with a Race Face crank. I love the carbon cranks, the meticulous machining on all the parts, and the solid derailleur and shifter action. 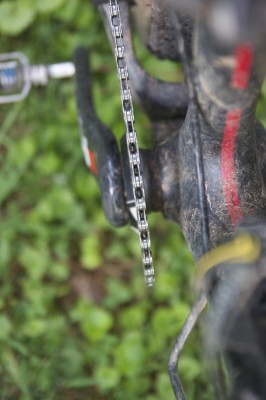 Ok, sure, having to shift a front derailleur is a first-world problem, but once you go 1-by, you never go back (or something like that). So I had to see if I could convert my SRAM X0 2×10 drivetrain to 1×10.

SRAM lists a 1×10 conversion kit on their website, which made the project seem simple. The kit (listed at $72 MSRP) is said to include a 32t chainring and guard. There’s no photo on the website, and I assumed there was a 32t chainring that could be attached to the inner chainring bolt holes while the guard would attach to the outer bolt holes. But it didn’t matter how it worked–my LBS couldn’t track down the part. Even QBP had never heard of it. Vaporware?

My next thought was to simply track down the necessary parts (chainring and guard) individually. The LBS wasn’t able to find the parts immediately, so I took to the internet and read good things about the custom parts from Homebrewed Components. I could have a 32t chainring machined with the proper bolt spacing I needed plus it looked like I could find a guard pretty easily. But due to popular demand, Homebrewed isn’t promising anything delivered sooner than 12 weeks out. 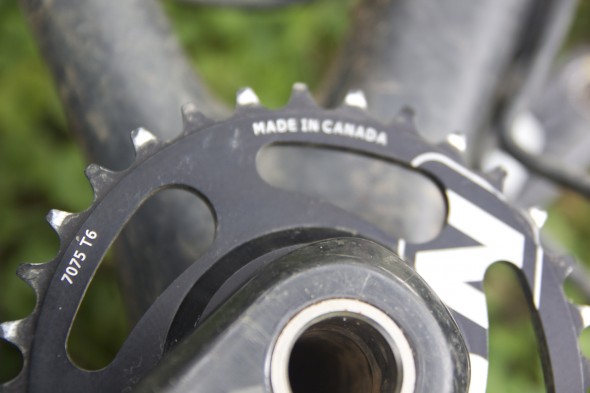 The next day I got a call from Mark at the LBS, and he had found a solution! North Shore Billet produces a 1×10 direct mount chainring (about $65) that’s compatible with SRAM X0 and X9 chainrings with a removable spider. Within a few days, the part was in my hands, and I swapped out the 2×10 spider on my crank and slid the direct mount chainring on board.

Word on the street is a direct mount chainring is more efficient at transferring power because there’s no flex at the spider–every bit of power goes straight into spinning the shaft. I’m not a sensitive enough rider to notice the difference, but I can say it feels super solid on the trail.

Now, chain retention is an issue with any 1-by drivetrain, as I found out with my 1×9, which would drop chains like a ghost in the attic. On my 1×9, I run the XCX chain retention system, and it does its job flawlessly with minimal added weight. This time around, I also considered a type-2 derailleur with a clutch like the derailleur used in SRAM’s 1×11 drivetrains. SRAM offers 10spd type-2 derailleurs, and the X9 version is priced fairly reasonably ($116 MSRP). But I was too anxious to start riding, so I would decide later. 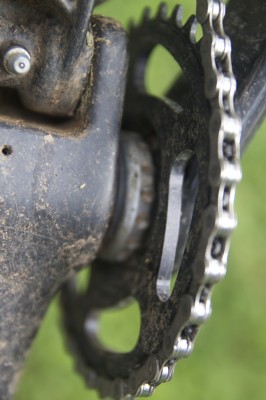 I took the bike out on a shakedown to really see what it would take to drop the chain. Extended stair descents, bumpy gravel road burners, and even launching the bike in the air didn’t budge the chain. I suspect the ramping (or lack thereof) and the thicker teeth on the North Wave Billet chain ring really help here… or I’ve just been lucky so far.

I’ve been riding my Tallboy 1×10 for several weeks now, and the revamped drivetrain has made a huge difference. My rear cassette is 12-36 which doesn’t have quite the low end like my 1×9 drivetrain (11-32), but having that 36t cog is nice on super steep stuff.

After riding 1×9 for several years, I haven’t found 1-by gearing to be too limited, even in the mountains of Colorado. Dropping down to a single chainring up front isn’t for everyone, but for many riders it might just scratch an itch. And with a simple conversion like this, you can always go back if you don’t like it!

I just love the simplicity of it plus the lost weight (almost a pound). For those who are not great climbers just put a chain ring 2 teeth bigger than your actual smaller one and done. That will give you enough range until you develop more strength in your legs. Once people start realizing how convenient it is to run a single chainring the front derailleurs will be a thing of the past.

Missing that 32T ring is what I fear about a 2x system, ’cause like you, for me and where I live, 32T is perfect for 99% of the riding I do. I’ll be going 1x eventually, but I gotta wear out my 3×9 drivetrain first haha. I do enjoy (and use) the big ring and granny ring when I go to the mtns.

WAY more affordable than going 1×11, that’s for sure! I’m looking forward to hearing how you like the 1×10 compared to the 1×9 after you’ve been on it for a while.

I like it so much I’m considering in a road bike! I feel that it’s a great simple solution. Once you build the stamina and legs to spin in a lighter gear (if needed) you can compensate from loosing the leverage of a bigger ring. After all the bike system just repeat the gear ratio real close. If you get comfortable just been in between the low and high gear you’re done. Just look it at it this way: Every time you change from the big ring down or up you loose some forward momentum and if you end up in a way lighter gear you end up shifting in the back too. One thing I notice when you are in obstacles like rock gardens, logs, etc. you take a lot of shifting guessing out of the equation which translate in more speed. The one from Wolf only requires a clutched derraileiur and you would not drop the chain their thooth profile goes thin-wide so it keeps the chain on track all time, plus the theeth in the ring are a little taller so they have more contact on the chain rollers. I just love the it!

Ok, so today I successfully (or unsucessfully?) dropped the chain twice so it looks like I’ll be shopping for a type-2 derailleur.

I converted to 1×10 a few months ago on my hard tail 29er. I went w/ a 32 tooth BlingRing (another direct mount/spiderless chainring option) and an MRP Lopes chain guide combo as my solution. A short while later, I smashed my rear derailleur and replaced it w/ a short cage SRAM X9 type-II. This is way overboard w/ respect to chain retention, but I don’t like dropping my chain.

12 week wait for a home brewed chainring is optimistic. HBC took about 5 months to produce my 30t chainring. I recommend Wolf Tooth, costs more but much better service. You’ll get it in a week.