Camelbak basically invented the wearable hydration category but it seems like the upstarts have been getting all the attention lately. It’s not a dissimilar position to the one Apple is in with the smartphone market… but I digress. The point is Camelbak continues to improve their own tried-and-true designs, all in the name of keeping us well hydrated on the mountain bike trail. 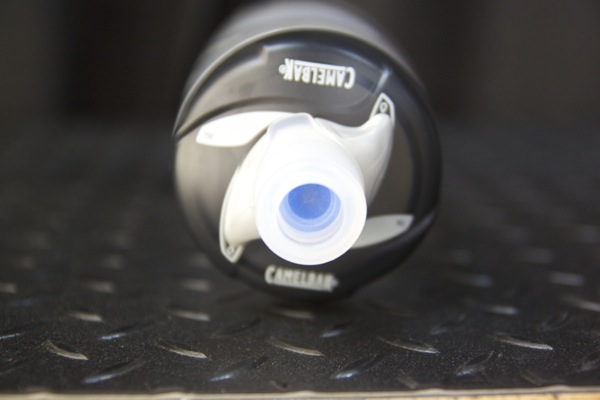 Water bottles probably aren’t the first thing that come to mind when you hear the name Camelbak but the company actually puts out a great line. The Podium series was recently tweaked for better squeezability and to make the valve even easier to clean. Camelbak also produces an insulated bottle that holds up to 25oz. of frosty liquid. Who rides with water bottles instead of a hydration pack on the trail? This guy. 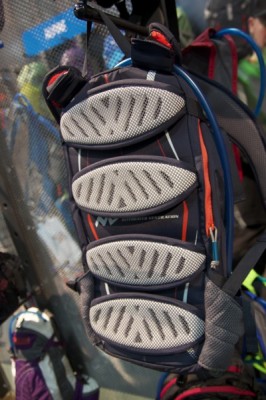 Camelbak’s NV back panel is a relatively new design that works to keep the pack off your back for improved ventilation and comfort. Each panel is independent so it can move with your body while keeping the spaces between panels open for maximum air flow. The company is offering the NV back panel in many of its most popular models this year including the M.U.L.E. and H.A.W.G.

This may be old news to many but Camelbak’s All Clear bottle is a $99 bottle with built-in UV water purification that’s dead simple to use. There’s a 60 second countdown timer that lets you know when your water is safe to drink and the rechargeable battery lasts for at least 80 refills–16 gallons. This could be a good option for bikepacking or even all day epics where you can’t (or don’t want to) carry enough water. The All Clear is also helpful when traveling to places like Mexico where even tap water can be unsafe to drink. 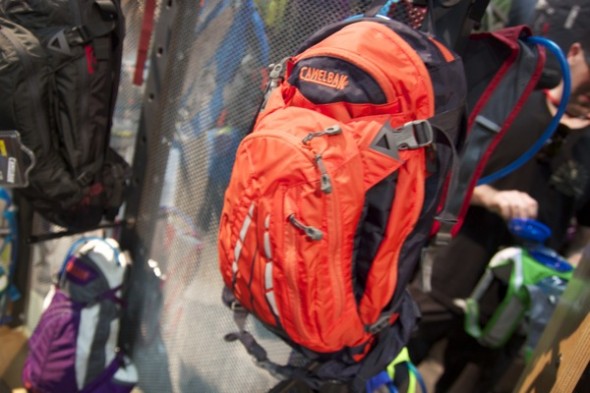 I recently started riding with a fanny pack (seriously) so I asked Camelbak marketing manager Seth Beiden about the possibility of producing something similar. While the company doesn’t have any plans in that area, he didn’t dismiss the idea which just goes to show Camelbak listens to customer feedback and is willing to consider (wacky) new ideas.

Camelbak continues to innovate in hydration and packs, building on the knowledge the company has gained through years of experience in the market. The 2013 product line looks great and should continue to deliver on the promise of never running on empty!

I have a couple of old Camelbak packs, but the last couple of packs I have bought were Osprey. However, I like the blaze orange pack. Great idea. I have blaze orange shirts and pullovers for that very reason, but an orange pack would be a nice addition to prevent mistaken identity on the trail. I am also interested in checking out the filtration bottle. Thanks for the write up.

Just a clarification–the All Clear doesn’t filter water, it only purifies it. That means it won’t remove bad taste or even brown coloration but it will kill all the harmful stuff that might be lurking inside. Best to fill this up from a clear mountain stream if you have access to one along your ride!

I’ve always wondered about the efficacy of the UV purifiers(seams too good to be true.), but of course a brand like Camelback should help me get over that. Do you have to swish some out the cap and treads of the bottle before use?
Love me some M.U.L.E. blaze orange, would be good.

I agree, the whole thing seems like it’s from the future–hard to believe it actually works.

I didn’t get the full instructions for use but I should be getting one in to review soon. Oh man, this is the first review where if the product doesn’t work I may actually make myself sick. 🙂

Jeff, you’ll be putting it all out on the line for the sake of quality journalism… especially if you’re trying some of the streams in Atlanta! 🙂

The first pack I ever purchased was Camebak but that was also the last one I purchased (at least three other hydration packs since then). Seeing some of this may cause me to take another look at their line.

The UV light will kill bacteria, but it won’t help with chemicals like pesticides and stuff like that, right?