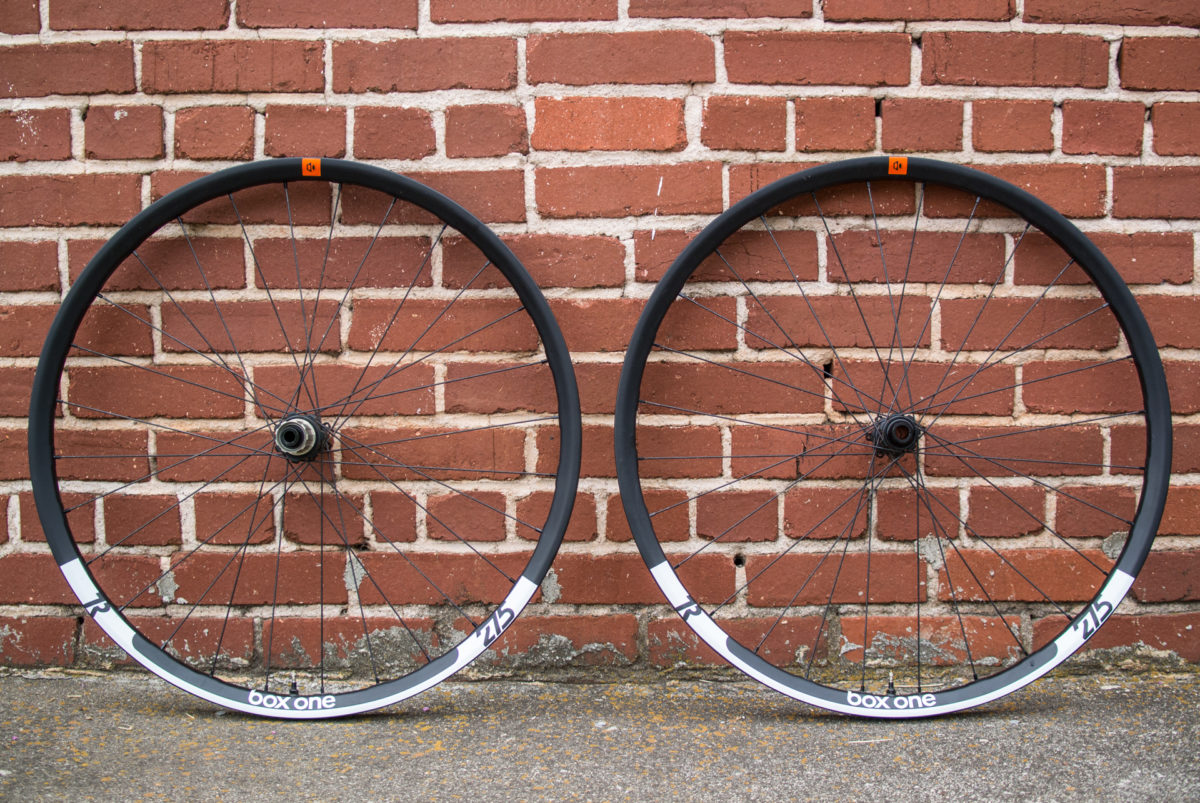 Box Components got their start in BMX but over the past few years, they’ve been making waves in mountain biking. You’ve probably seen Box’s drivetrain reviewed on Singletracks. They also offer stems and handlebars, each with Box’s unique flair. More recently, Box started producing carbon fiber wheelsets, which are reviewed here. 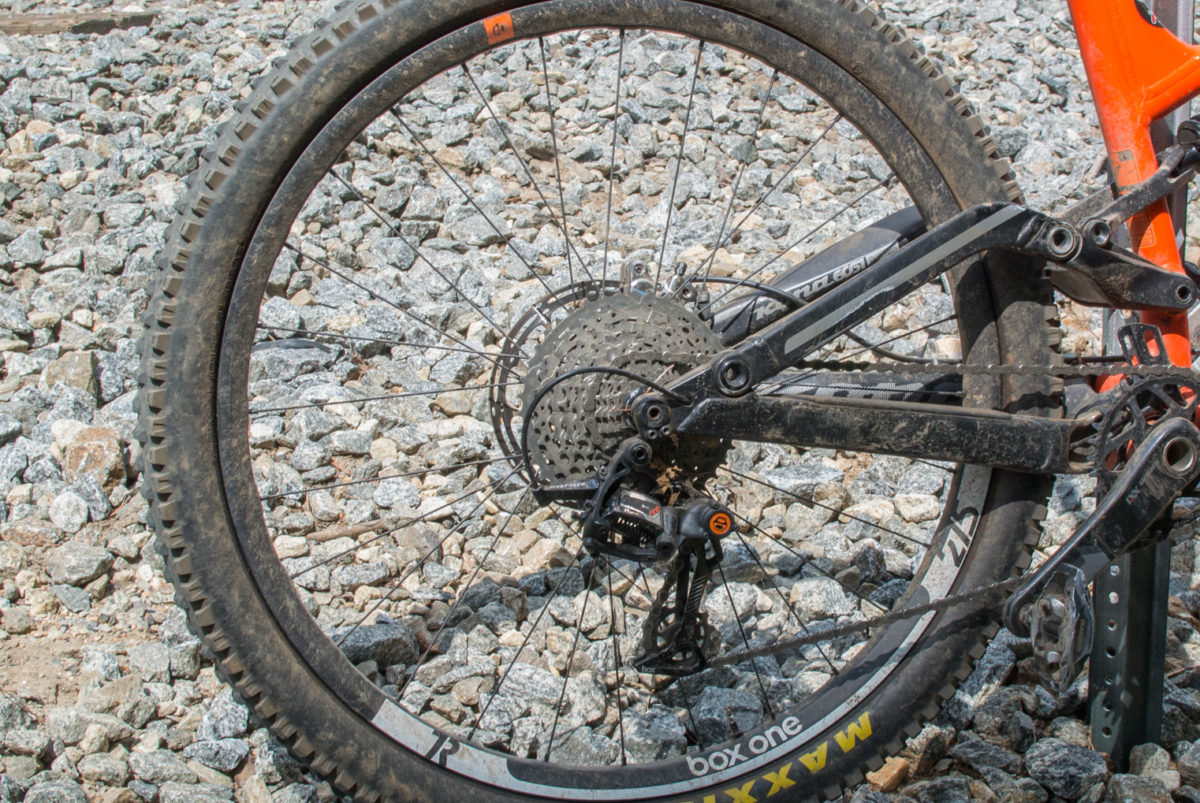 Externally, the Box One carbon wheels measure 33mm, with an internal width of 26mm, and a height of 24mm. That relatively narrow width may turn off some riders, but it wasn’t long ago that World Cup downhill races were being won on 25mm wide Stan’s Flow rims. If you want the ability to run plus tires, these aren’t ideal, but if you’re running 2.3- to 2.5-inch-wide tires, the Box One wheels are a good match. Naturally, the rims are tubeless-ready, with Box opting to include a slight bead hook.

Both the front and rear wheel use 28 straight-pull, Sapim Race double-butted spokes, laced three cross to Box’s own hubs. The rear hub uses a three-pawl system on a 36-tooth ratchet ring, giving the wheels an engagement of 10°. I’d like to see quicker engagement but as is, drag was minimal and the hubs are nearly silent. 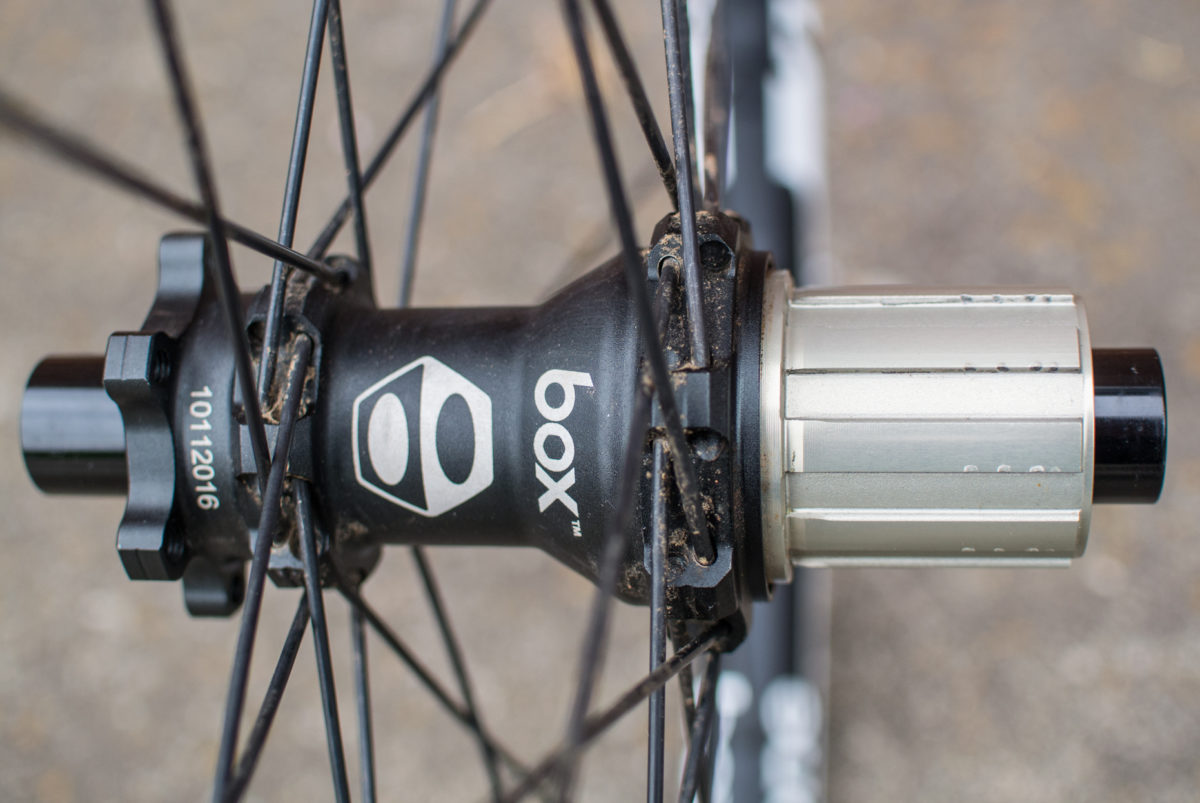 Box ships the One wheels pre-taped, with valves, spare spokes, and both Shimano and SRAM XD drivers. I tested a set of the 27.5″ One wheels with 15×100 front spacing and 12×142 rear spacing. Box offers a Boost-spaced version as well. Claimed weights are 746g for the front and 908g for the rear, with tape included. I weighed the wheels with valves installed and got slightly higher figures: 770g front and 920g rear.

Update: Box got in touch to let us know they have two additional rim width options as well: 30mm internal and 35mm internal. 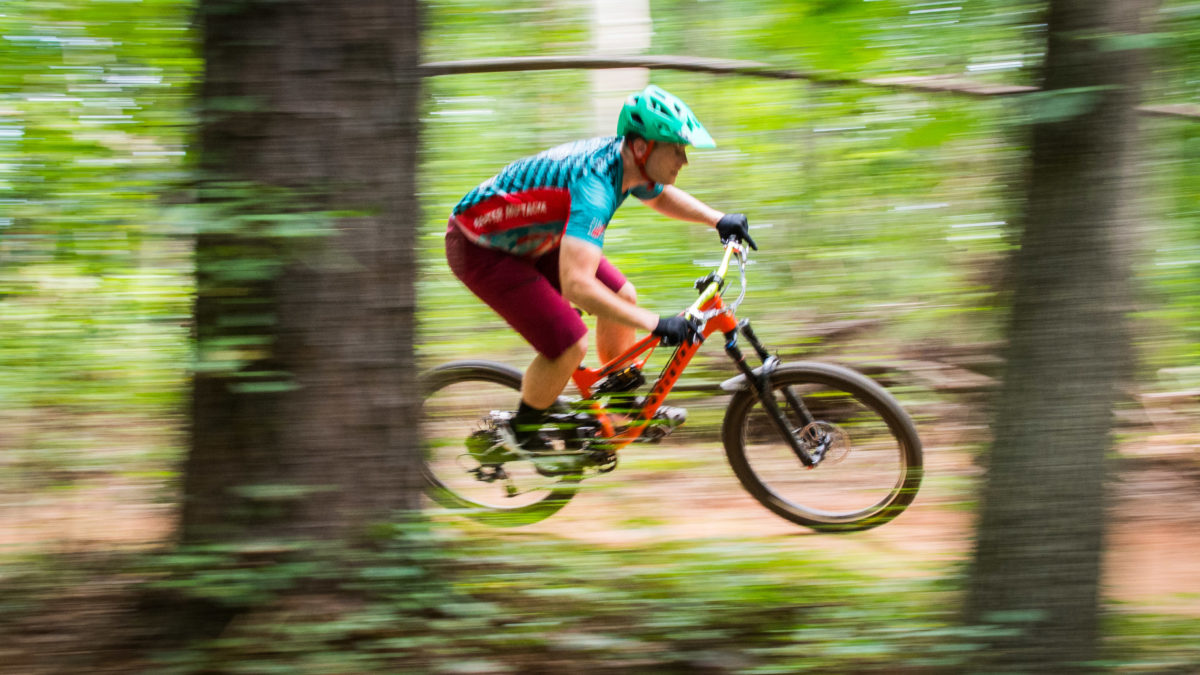 For the duration of my testing, I had the Box One wheels mounted to my Kona Process 153 trail bike. I used Maxxis High Roller II (2.4″) and Minion DHF (2.3″) tires inflated to 28-32 PSI, depending on the trail ridden. As mentioned above, the 26mm internal width suited “normal”‘ width trail tires just fine. Once inflated, the tires had a nice profile: not too round but not too squared-off, either.

Thanks to their low weight, the Box One wheels spun up impressively fast. As I mentioned in the specs, I’d prefer to see Box speed up the hub engagement, but on trail, the slowish engagement wasn’t an issue. With slow-engaging wheels I can often get the rear hub to pop and skip when ratcheting up a technical climb, but that never happened with Box’s hubs. After a few months of moderate use, both hubs are still spinning quietly and smoothly. 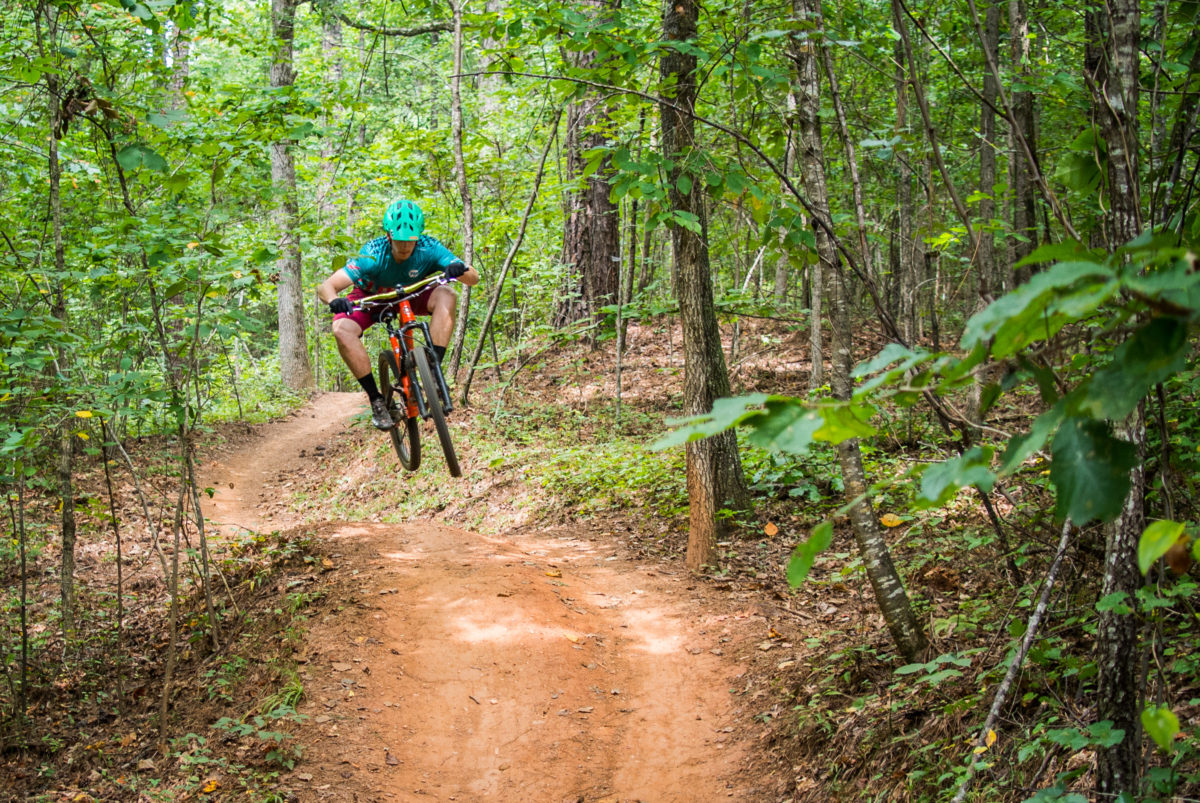 Ride quality — that most subjective of traits — was excellent. I’m a big dude, so lateral flex is an issue I notice right away, especially at the wheels. Box’s One wheels proved stout when pushing into berms, jump faces, and hammering through rock gardens. The stiffness combined with a low weight made the Box One wheels especially snappy under acceleration or while dipping through turns.

Some carbon wheels on the market are arguably too stiff, making for an uncomfortable ride. I’m happy to say these Box wheels don’t fall into that category. I headed out on 30 to 40-mile rides with the One Carbon wheels mounted up and never regretted it, no matter how rough the trail. Box engineered a degree of compliance into these wheels, and it suited them well: they were stiff enough to offer precise handling but not so stiff that you’d get knocked off line by errant rocks. 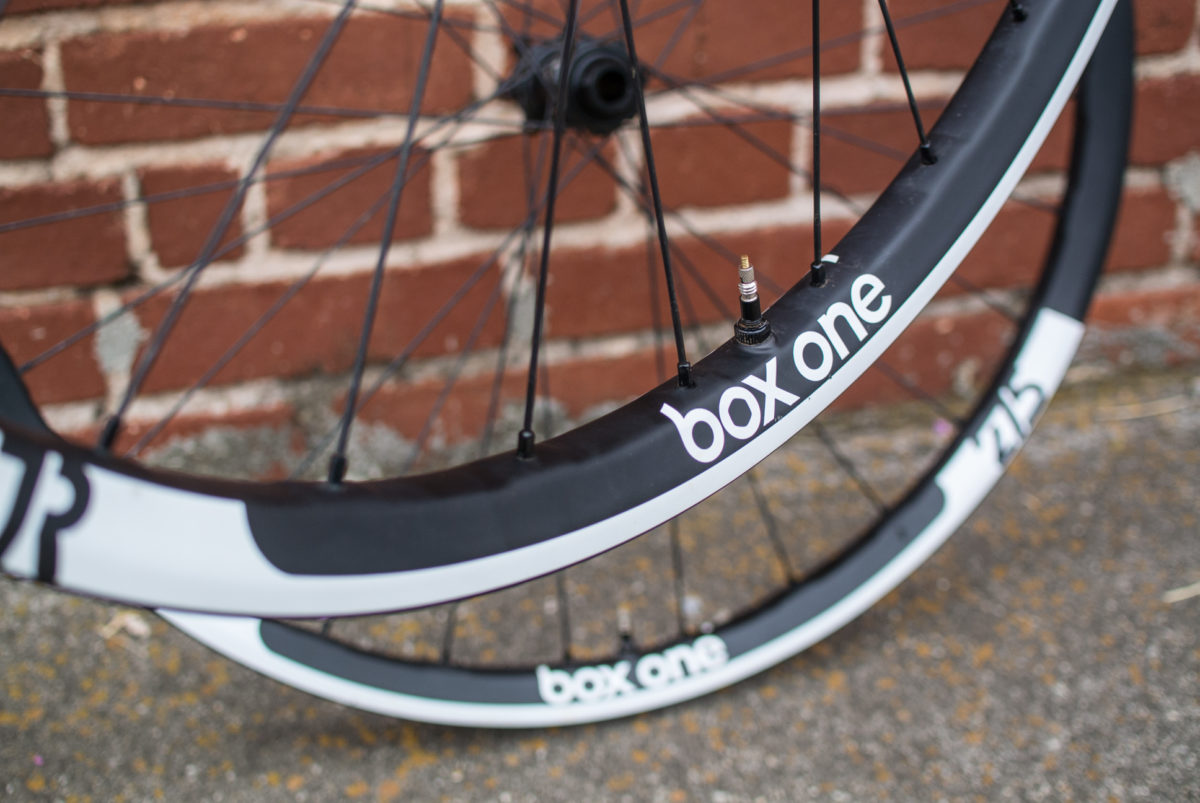 During the test I only had a single spoke work loose. Even though the spoke lacked tension completely, the rim remained mostly true. It wasn’t until I hand-checked the tension that I even noticed the wiggly spoke. A couple turns with a spoke wrench was all it took to bring the wheel back up to snuff. The front wheel remained true and fully-tensioned for the duration of the test.

As expected, there are a handful of knicks on the rim and spokes from rocks and other assorted trail debris, but nothing undue. The low-key matte finish helped to minimize the appearance of scuffs and scrapes. Box chose understated, water transfer decals for graphics, and they still look sharp months later.

Going over the lips of both rims with a critical eye revealed nothing but perfect carbon. If I did bottom out the rims, they certainly aren’t showing any signs of it. That said, I run sturdy tires at relatively high pressures, which helps mitigate any impacts. 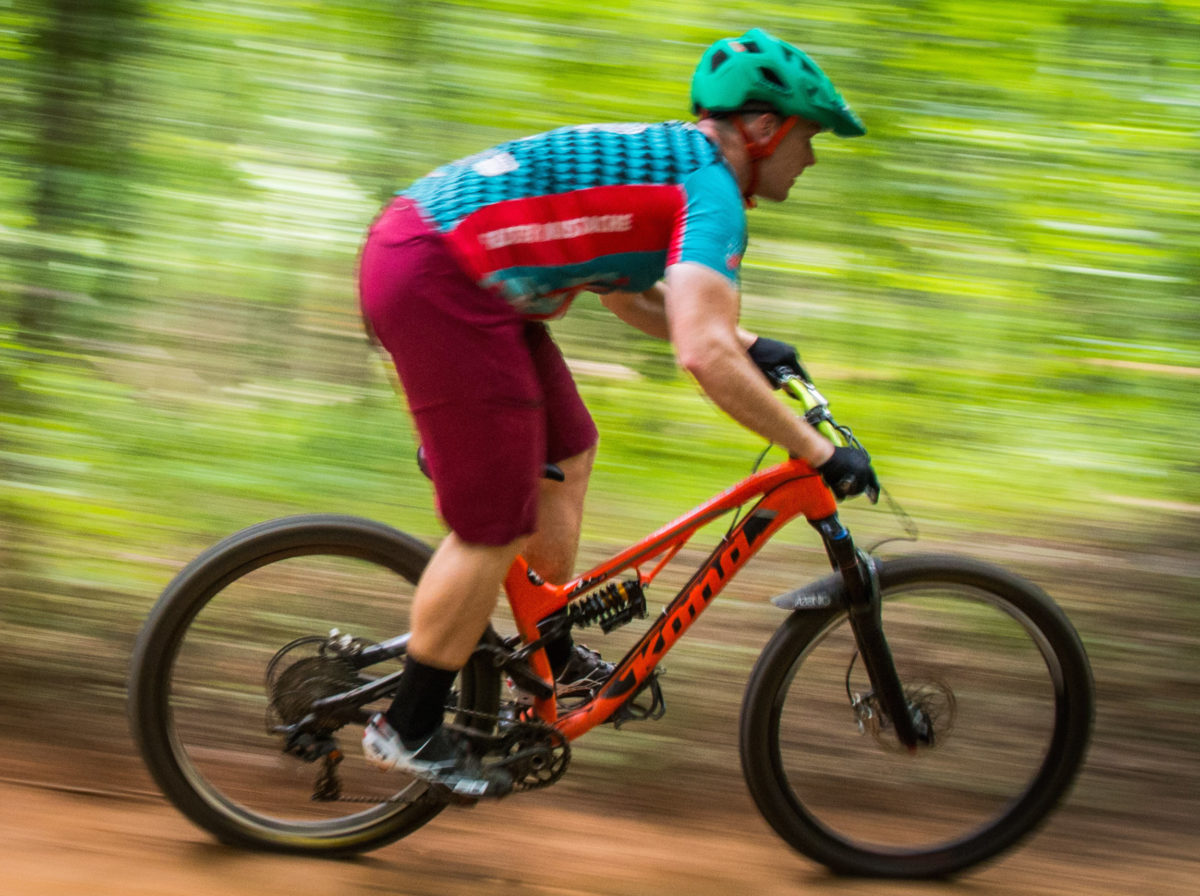 Overall, I came away impressed with Box’s first carbon wheelset. They are light, stiff, durable, and comfortable on the trail. Box deserves bonus points for achieving all those attributes without any proprietary parts or funky lacing patterns. Again, I’d like to see a quicker hub at this price point, and with Box Components’ recent acquisition of True Precision Components’ Stealth Hub technology, I’m certain they’re on it. While the internal rim width worked perfectly for my preferred tires, others may prefer some extra girth. I wouldn’t be surprised to see Box offering multiple rim widths on future wheelsets.

Thanks to Box Components for lending us the One Carbon Wheelset for review.