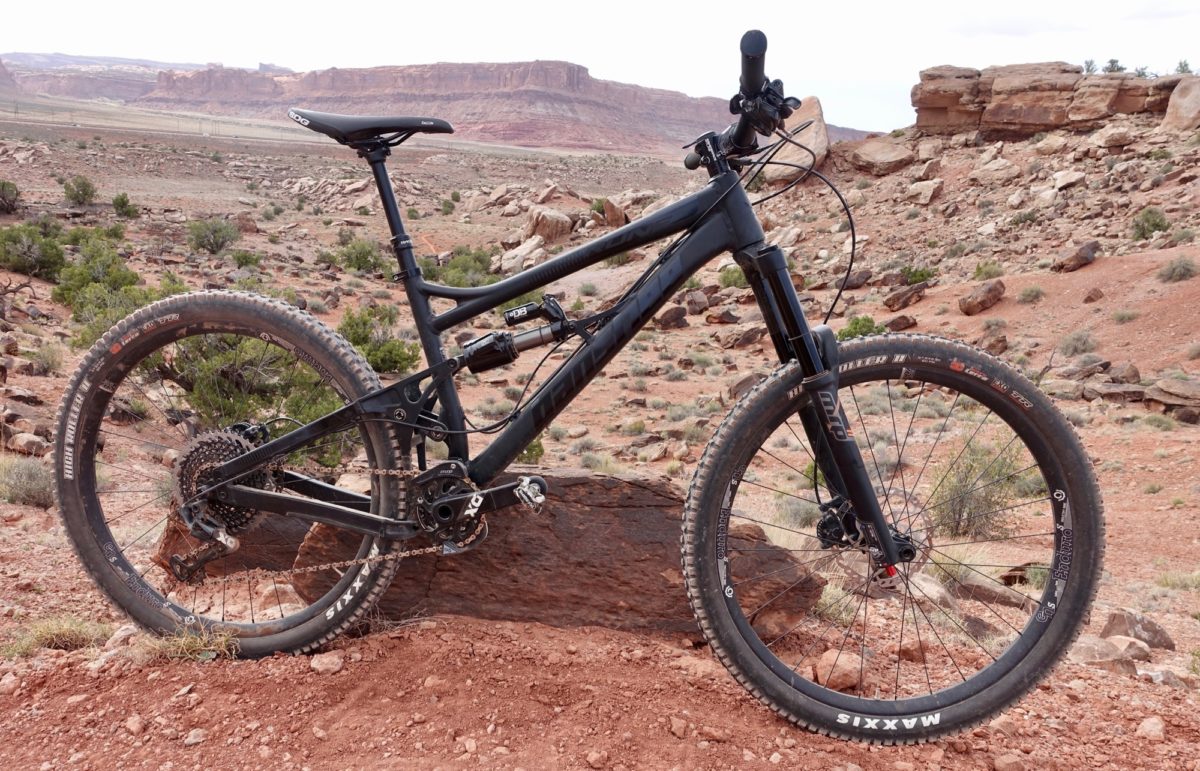 The 2017 Spring Outerbike saw a 30% increase in attendance over 2016, which is a big accomplishment for Western Spirit! Unfortunately, the number of vendors didn’t keep pace with the increase in consumers, and many times Aaron and I were left searching for bikes to ride. One booth that kept getting passed over by most consumers was MRP–unfairly, I might add. Not only did MRP have their new Ribbon fork available for testing, but their forks were mounted to Banshee test mules.

Banshee can’t claim the level of name recognition or cult following of say Yeti, Ibis, or Pivot, but I personally was stoked to swing a leg over a Banshee. While you do see Banshees in the wild–one of my friends rides a Banshee Spitfire–this would be my first time putting foot to pedal on one of their bikes. 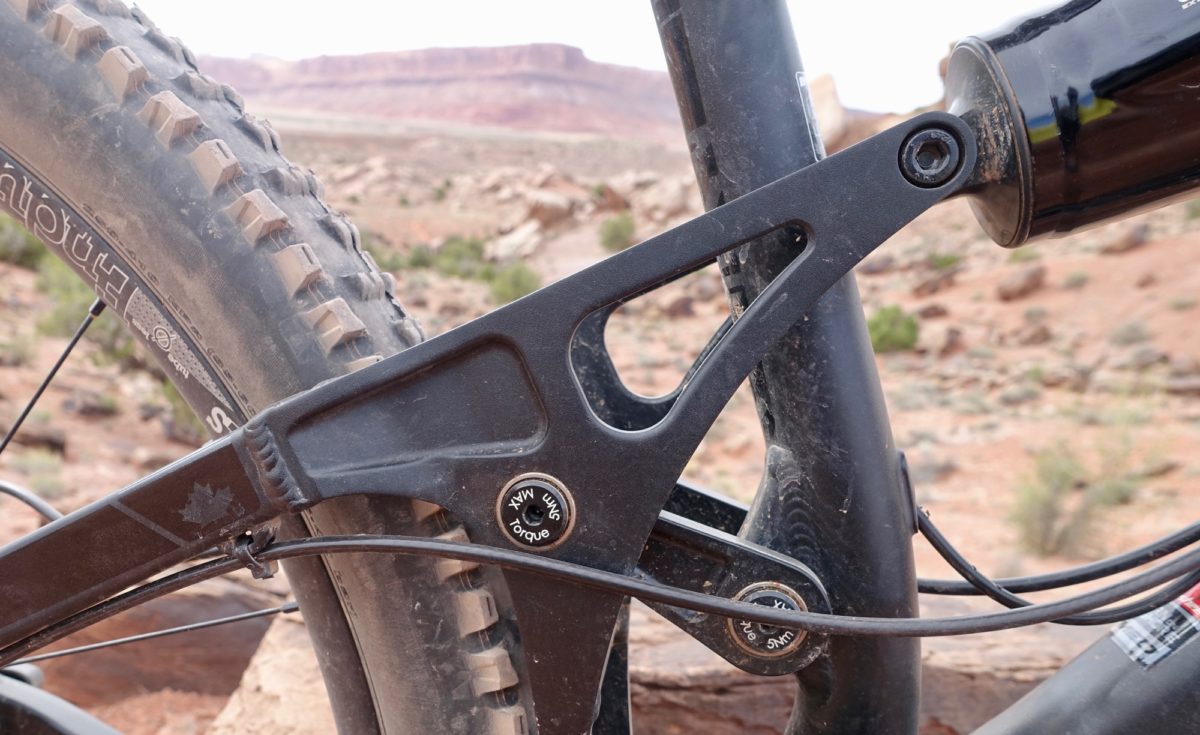 The Banshee Rune sports a 7005 T6 aluminum tubeset. Banshee doesn’t deal in carbon frames, which could be one reason they don’t have a big bling appeal. However, that doesn’t mean their bikes are portly–built up with a 170mm Ribbon and a beefy component spec, I measured the Rune at 31.5lbs, including my SPD pedals. Compare that to the carbon Marin Attack Trail with SR Suntour suspension, which I rode in the same day, which measured an identical 31.5lbs.

That aluminum frameset offers 160mm of rear travel and as I mentioned, MRP paired it with a 170mm Ribbon fork. The Rune offers adjustable dropouts which both tweak the geometry and can accommodate either 27.5″ or 26″ wheels–a rarity these days! According to the geo chart, the Rune offers either a 64.5 or 65-degree headtube angle, depending on the style of dropouts. (Click here for a full geo chart.) Rear hub spacing is Boost 148.

The retail price for a Rune frame with a Cane Creek DB Inline rear shock is $1,899, according to Jenson USA. 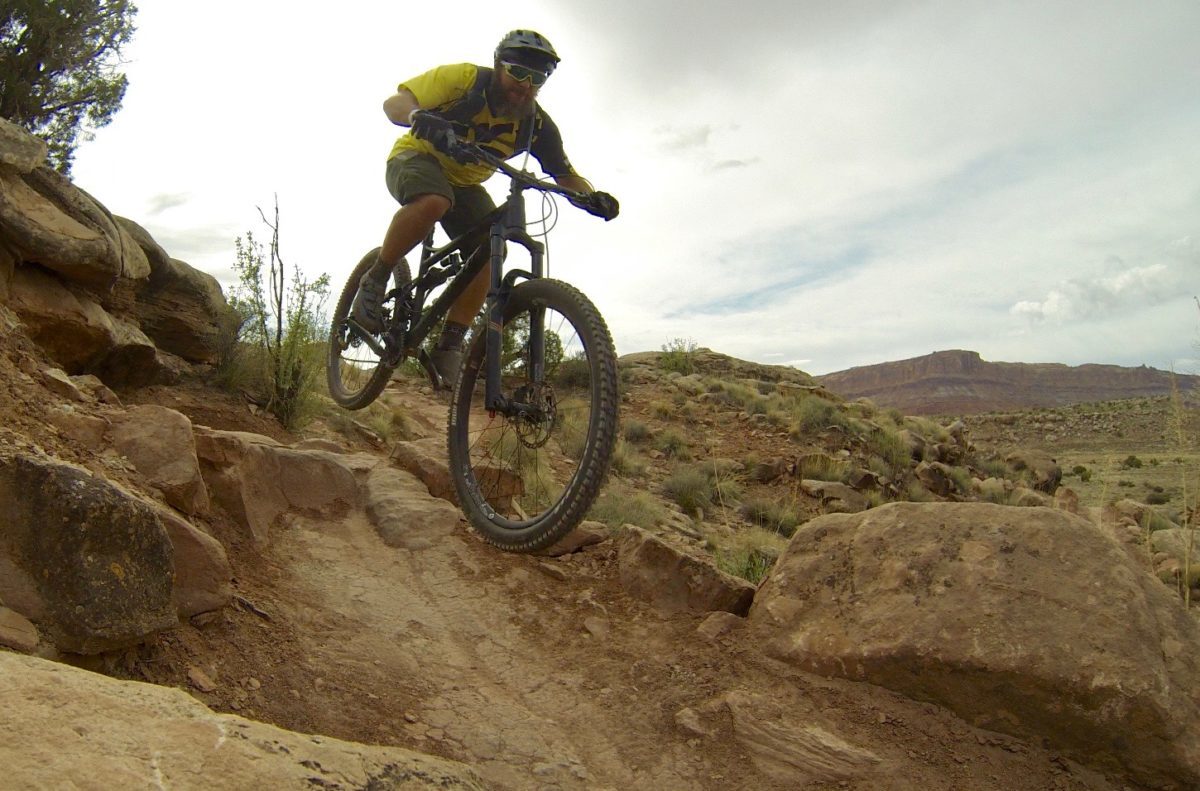 While I wish I could have spent more time with the Banshee, unfortunately I was crunched and could only fit in a 40-minute jaunt. However, in that short amount of time, I had a few key takeaways.

First, despite the slack geometry I found the front end to track true on the short, punchy climbs of the North 40 loop at Moab’s Brand Trails. Thanks to the DB Inline shock and the great settings on the MRP Ribbon fork, I had pedal modes and compression adjustment at my disposal, but I chose to run the bike full-open. In this short test I found it to pedal confidently, like a much shorter travel bike. 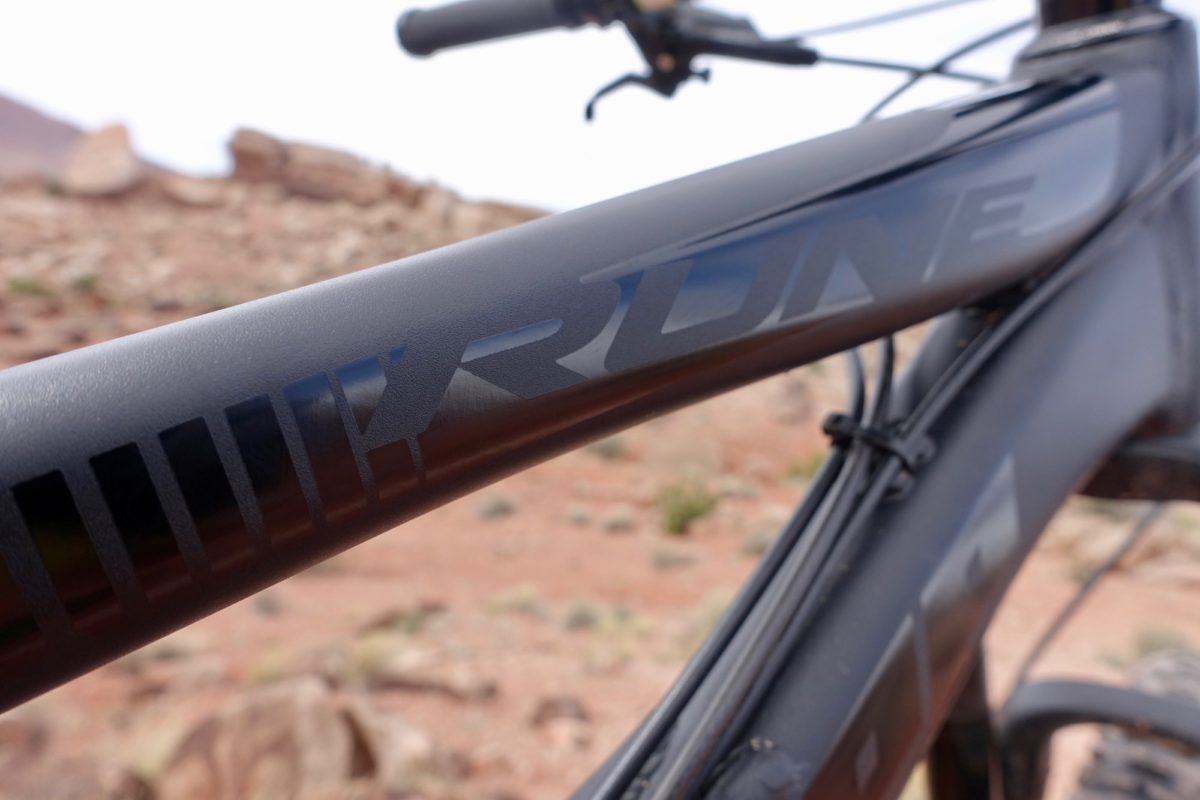 In some of the tighter sections on the trail, the relatively long wheelbase required a bit of body english to compensate. While not absurdly long, Banshee lists the wheelbase at 1183mm in a size-medium (could have been longer in my test due to a 170mm fork). For comparison, the YT Capra I rode sports a bit more suspension travel, a burlier build, and the wheelbase measures 1176mm. Again the Banshee wasn’t absurdly long in category, but many of the modern 160/170mm enduro bikes we’re seeing in 2017 aren’t designed for handling in tight, slow speed corners.

When it came time to destroy some gnar, the Banshee was more than up to the task! In fact, I didn’t have nearly enough gnar to point this rig at to get a true feel for its limits. I did send a few rock rollers and hucks with confidence, and on a few small jumps the Rune took to the air with ease and came back to earth with no hesitation. With its aggressive geometry and a proven rear shock, suffice it to say that the Rune isn’t familiar with limitations!