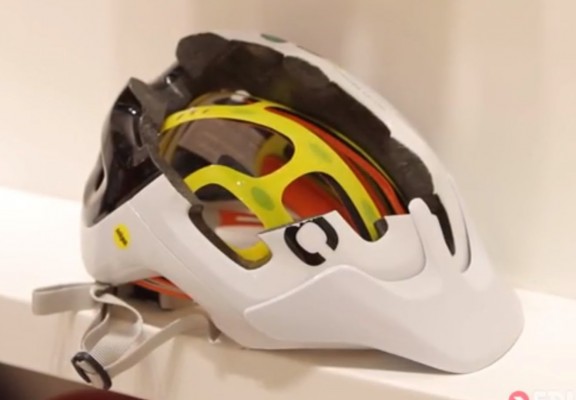 Skulls! You might think of your skull as being merely a substrate for your face, but it’s more than that. It also has the very important job of protecting your brain–also known as your “thought stomach”–from impacts. But some impacts are more than even a skull can take. And that’s why we wear helmets. To protect our thought stomachs and give our skulls the best possible chance of doing their jobs.

Thing is, most helmets are tested only for their ability to protect the head in the style of impact a person would endure if a giant picked them up by their ankles, lifted them 6ft in the air, and let go. That kind of direct impact doesn’t necessarily mimic the types of head injuries cyclists suffer, which is where MIPS comes in.

The MIPS website is long on fanciness and pretty short on actual information. But basically, MIPS is a thin layer of material (the yellow layer in the Poc Sports Trabec Race MIPS above) that goes between your head and your helmet. That layer allows your helmet to rotate on your head in an impact while still wearing it snugly in normal riding.

According to MIPS, that bit of movement helps protect the brain in an oblique impact, or one where a giant hasn’t picked you up and dropped you directly on the top of your dome. Further, the added low-friction layer in the helmet is meant to imitate the brain’s own low friction layer of fluid inside your head.

All of this effort is intended to help prevent concussions. But people in the helmet business are loathe to use the word “concussion” in any way because use of that word is like catnip for lawyers. No helmet can prevent concussion. But using the word “concussion” in any way related to the sale of a helmet is just asking for someone to sue you, probably successfully, when Johnny Downhiller meets Mister Tree at 45mph and stirs up his thought stomach.

Hopefully, newer technologies, like MIPS, will help us reduce the number of concussions cyclists suffer. I have a lot of very important thoughts in my brain. Thoughts like: “Let’s go ride bikes.”

For more information on MIPS and other helmet technologies, check out this informative and exhaustive article from Bicycling.

Hey
thanks.
Good article. I’d really like to see that bicycling piece on MIPS too. Unfortunately the link here is broken and a search there doesn’t find it.
Thanks though.