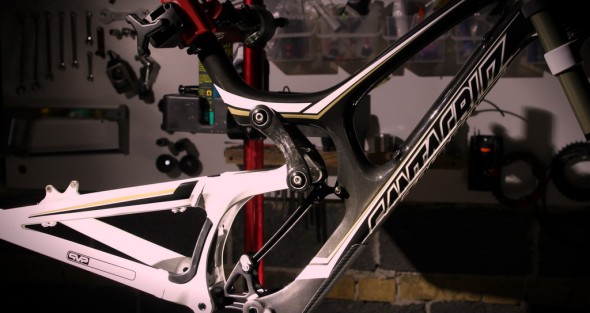 Can you think of anything more exotic than Carbon? Neither can I. Introducing the gorgeous 2012 Santa Cruz V-10 Carbon!

I seem to recall that Gordon Murry, a well-known engineer in motorsports, once said, “If it looks fast, it probably is.” Well, it turns out he’s right. 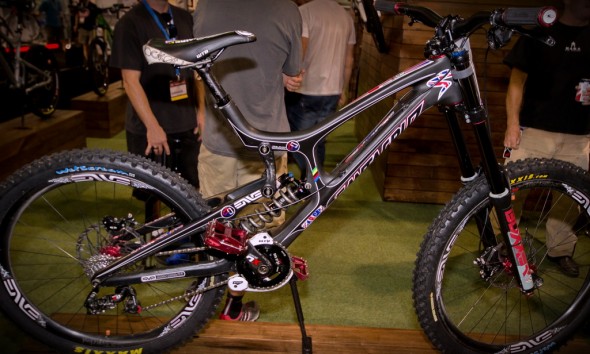 It all started back at Interbike while chatting a bit with the boys from the Syndicate and asking their feelings about the bike. Seeing that they were all smiles, I had to put one together. Besides, at the show this bike just looked so hot! After talking with a few other manufacturers I put together my own wish list of parts that I, and I am sure others, would like to see tested on the slopes. The actual build that comes with the V-10 Carbon is already a great build… I just wanted to see how far I could go. A few emails to Easton, Fulcrum, SRAM, Schwable, and Spank, and I was on my way.

But I still had a few hours of sweat equity to put in. Unfortunately, when it comes to custom bikes, you have to do one of two things: either build it yourself or pay someone else to do it. Of course I chose to do the former and over the next couple weeks I’ll be sharing some how-to articles about my build. 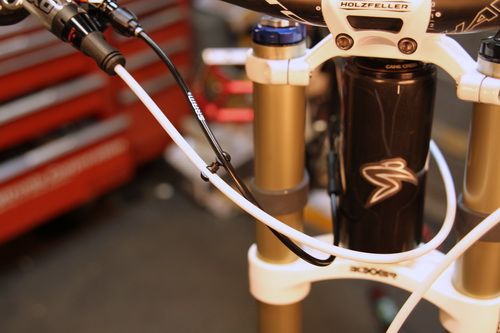 So far I’ve already managed to get in a few rides aboard the V-10. The first thing I noticed was how incredibly light the bike felt. Every pedal stroke going into the trailhead at the slopes was pure acceleration! I managed to get the last DH bike I built down to 36.4lbs; the V-10 Carbon first came in at 32.42lbs. That’s a massive difference in weight! I also found that even after I removed half a degree of head angle to slacken up the steering (more on that in a later article), the bike was still very nimble at speed. And speed is the big key here. 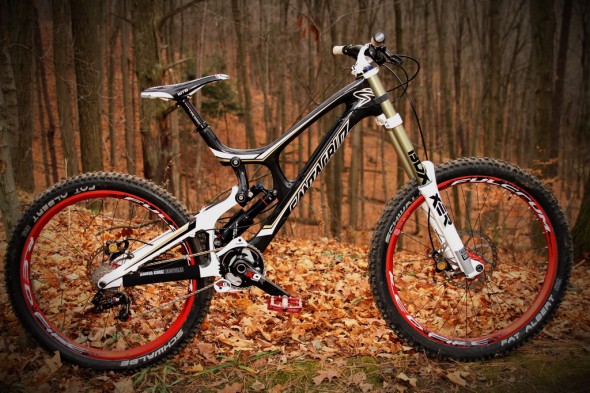 The V-10 feels like it was meant to be in the air. When the bike leaves the ground, the light weight makes for a very flickable ride. On the ground the bike is lightning fast and can change direction with minimal steering input. You would think that the light weight would mean that the bike is fragile. So far, I have had no issues: tossing the bike into rock gardens was not an issue. The 14.5″ high bottom bracket helped at keeping the cranks and pedals away from stray rocks and boulders. I kept the bike in 10.5″ mode seeing that I preferred the slightly plusher ride, and the added travel didn’t hurt anything either.

I didn’t have a chance to tune the bike much after going a bit too fast over a road gap early in my test, which cut the day short. But up until then the bike was getting more and more comfortable with every tweak of the compression and rebound settings. I will not divulge the settings a this time, but will wait until I give a full review of the bike itself.

In short, if you have a chance to give this beast a ride: do it! This is an amazing bit of technology from the folks at Santa Cruz.

So what kind of price are you looking at when assembling a dream bike like this one?

I would like to thank the folks at SRAM, Santa Cruz, Fulcrum, Schwalbe, Spank, WTB, and Easton for sending down the gear for this build.

Great way at looking at it…There are a of big hit bikes that look like what you describe…Intimidating perhaps it sets an “image”. First thing I was thinking of this bike was not the burliness of it, but rather the slick fast look to it..I also recall the conversations we had at Interbike and how much stronger the carbon frame was over the aluminum version despite the delicate look of the new carbon structure over the beefier older Al version.

BTW a bit of tweaking and the bike is now down to 32.34lbs. Some creative choices of titanium substitutions on components…Now trying to find the last .34lbs to get to a flat 32lb. Without compromising strength.

This is such a sick looking rig!! Have fun thrashing this thing Syd!!

Looks like an overall great build, I just cant bring myself to fully trust carbon frames in downhill bikes yet.

I saw a build come in at sub-30 lbs online somewhere although I’m sure those last two lbs compromised strength. How pedal friend does it feel? Could those die hard “one-bike for all” chumps realistically trail ride on one of these?

I seem to recall that build, I think the cranks, pedals were a bit sketchy. I don’t think this will be too pedal friendly unless you want to tune it out…I haven’t had a long enough run too see how much pedal bob you do get..I will get back to you on that one…Once the miles get packed on it..

Slick lookin’ bike! Do the Ti bolts save a lot of weight? Worth the extra cash?

Now with the Ti issue….Are they worth it? Depends on the price your paying per bolt.

The up side is that per bolt your loosing about 35% of the weight on each bolt. Not too much of a savings considering the amount of weight in bolts, unless you have some big 8 or 10mm monsters…A bigger up side…No corrosion. The bolts will not rust. They will keep looking the same way over time.

Hmm! I think the corrosion resistance alone is worth it for me. Being just a few hundred yards from the ocean here in Florida is a pretty corrosive environment…everything rusts.

I’ve heard Ti bolt are weaker though. Should you not use them on the bolts that take a heavier load?

I have only once instance when a Ti bolt broke on me…It was on a Raceface Deus seatpost and the way the bolt was positioned it bent the bolt enough that it snapped at the root of the threads…Other than that using Ti on everything (brake calipers, brake levers, crank bolts, chainring bolts, replacement bolts on both forks and shocks, disks), otherwise nothing wrong.

I think carbon may be stronger than AL?? What do the pros ride nowadays? AL or Carbon..?