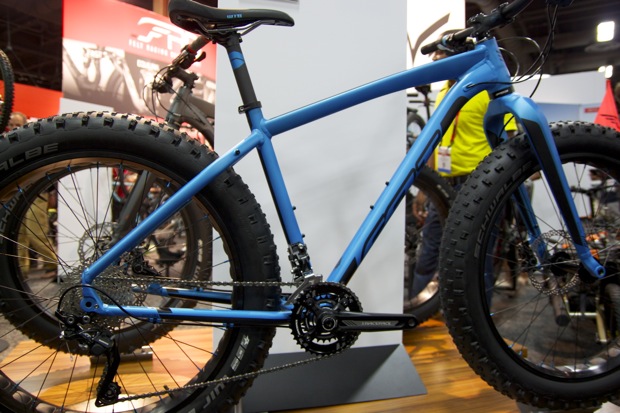 After demoing the Felt Virtue I asked one of the Felt reps about the company’s fat bike. He said it was called the Double D and that I should totally demo one. So I approached the women at the demo checkout table and asked if I could take out an extra large Double D. They gave me a strange look and chuckled a bit because, as it turns out, this bike is officially called the Double Double, not the Double D.

I didn’t end up getting a chance to ride the Double Double but I later found out it’s a 4″ rigid fat bike and is actually quite affordable, with builds starting at $1,399. -Jeff

It’s interesting to see that many (though not all) of the established MTB brands with fat bikes in their lines seem to be shooting for the sub-$2000 range while upstarts and smaller brands like Salsa are really pushing the tech with more expensive carbon bikes, suspension, etc.

I guess some of the bigger companies are thinking fat bikes are just going to be a second or third bike for consumers. But after riding high-end fat bikes (like the Bucksaw), I beg to differ! Fat bikes will be primary rigs for many riders so it’s time to really put some thought into these designs rather than just rolling out rigid bike with fat tires slapped on them to meet a reasonable price point.

I’m personally enjoying seeing bikes like the Rocky Mountain Blizzard and the Big Ed which are rocking nice components and a suspension fork, but they’re not outrageously expensive. $2,700 for the Blizzard with a Bluto and an XT build kit seems like a pretty awesome deal!

I think part of what we’re seeing too is that the fat bike market is already splintering into winter fat bikes and year-round fatties. Winter fat bikes (rigid, 5″ tires) will be more of a niche and will be a second or third bike for folks while the year-round fat bikes will rock 3-4″ tires plus suspension. The latter is a larger potential market but will take longer to develop.

Possibly, but it seems like with all the 29+ conversions on display of bikes that were originally pitched as “winter” fat bikes that some of these fat bike companies are really trying to say, “hey, maybe you first bought this bike to ride on snow, but you can easily make it a great-riding bike for the entire year.”

Still, I’m inclined to agree with you… it’ll be interesting to see how this shakes out, and if some companies will try to do BOTH all-year and winter-specific.

That Bluto fork is indispensable, I say. It makes already fun bikes real much more funner.

I gotta get on that bucksaw!

Dang, y’all are making me discontent with my new fat bike! Less than 200 miles and I already want a new one 😉

PS wouldn’t it make sense for RockShox to offer the Bluto with a straight steerer options, due to all the straight headtube steel bikes with rigid forks, like mine, running around?

I’m still a little hazy on the benefits of a Fat Bike over a conventional mountain bike. Anyone?

Hey man, check out this article, it might help answer some of your questions: http://www.singletracks.com/blog/uncategorized/fat-biking-101-10-things-you-need-to-know-before-biking-in-the-snow/

Maybe Specialized and Trek should come down off of Mount Olympus and join the rest of us mere mortals at the expo.

PS Specialized WAS at Outdoor Demo, just not at the indoor expo. But Trek is just fine with doing their own “Trek World” expo…

A few of the shops back home (NE Iowa) have been in love with them for 3+ years now. One of them (Decorah Bicycles) has started a fatbike rental fleet they love them so much! I moved away right before they got it up and running, but if I go back to visit, I’m tempted to try one out for the day, even if I bring my bike. They currently have Trek, Surly, and Specialized fatbikes available.

The Salsa Bucksaw has definitely caught my attention!

You ‘muricans must be getting really rich. You’re marketing 6k carbon fat bikes to the “masses.”