After returning the Lynskey to the Shimano booth I went in search of my next demo bike. This time around I wanted to try a carbon fiber 29er hardtail. Id never ridden one, and I was curious if carbon makes as much difference for mountain bikes as it does for road bikes. I headed over to the Felt tents and found a Nine Team in my size perfect!

The Nine series of bikes are Felts 29er XC bikes, and the Nine Team is the carbon-fiber top dog of the bunch. Now, I’m not exactly sure what model year bike I rode. It had a Shimano XT drivetrain and Fox fork. The 2012bike shown on Felts website however has a SRAM X0 drivetrain and Rock Shox fork. Everything else looks the same, from the saddle to the wheels, even the graphics on the frame are the same. So… I don’t know if you can buy the exact bike I rode, but the frame is the same and all the ride impressions are still valid. 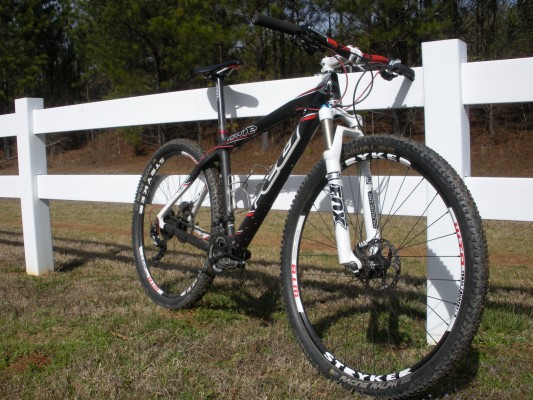 Unlike a lot of modern carbon fiber wunderbikes, the Nine Team doesn’t have a super curvy silhouette; it’s a traditional looking frame from a distance, which I like.

The Nine Team is built for racing and riding fast. This is not a trail bike built mostly for going downhill–its sole goal is to go fast. The short head tube combined with flat handlebars and an 80mm fork means the front end is nice and low, if you want it to be. Typical of fast handling race bikes, the bars are on the narrow side with a relatively steep head tube angle. Apparently I like race bikes, because I absolutely LOVED this bike! 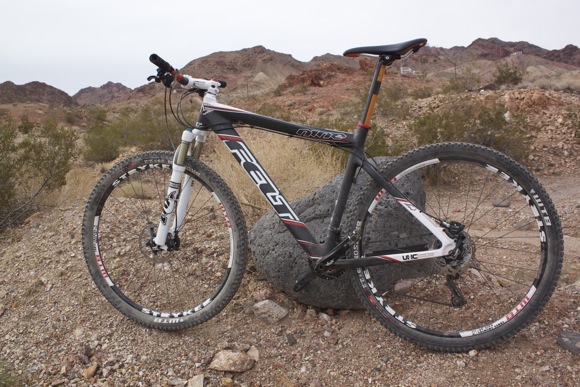 Telepathic. Thats the best word I know to describe how the bike handled. Wherever you even think about going, its there before you finish the thought. I rode it on the woods side of the Horse Park, and the trails there are fast, flowy, and tight and twisty in places. The Nine Team just ripped and railed everything the trails threw at it. Thanks to the low front end my bars were a few inches lower than my saddle (which I like) and let me keep plenty of weight on the front wheel so it would stick in the corners, and it did. Everything from high speed sweepers to multiple back-to-back tight corners were handled with ease. Just look where you want to go, and it goes there. 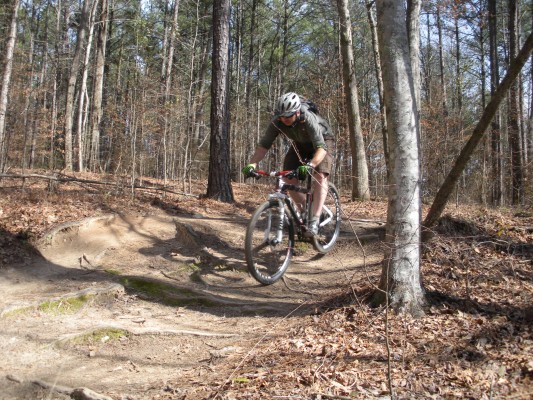 I liked this bike. A lot.

But… do not look where you dont want to go, even for a moment, cause itll go there too. The bike never felt nervous, like it would get knocked off line, but it will change lines instantly if you want it to. You gotta pay attention. Of course, at the speeds the bike is built for, you better be paying attention anyway!

My first ride on a carbon bike was a road bike. I was blown away by how smooth the bike rode when compared to an aluminum bike. It was still stiff under pedaling and cornering, but vibrations and ripples where almost completely muted. It wasnt a small difference, it was night and day. Even someone who isnt a serious rider would be able to tell a massive difference between the two. 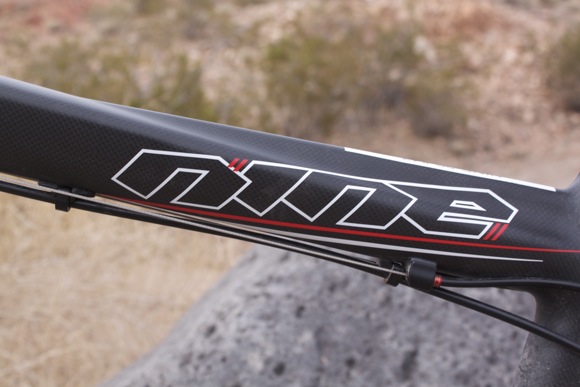 There isn’t any black paint on the frame, just a bare cosmetic carbon finish.

For mountain biking however, its not as big of a difference. The Nine Team might have been a bit smoother than my aluminum bike, but its hard to say. I didnt spend any time adjusting the tire pressure, so I probably could have smoothed it out even more with a little less pressure. Either way, its certainly not a night and day difference like it is with road bikes. Off road, the larger volume and lower pressure tires are a much bigger contributor to ride quality than on a road bike, with smaller, higher pressure tires. I would say the Lynskey rode a bit smoother, but again, without fiddling with air pressure, and a lot more miles, its hard to say which was really smoother. 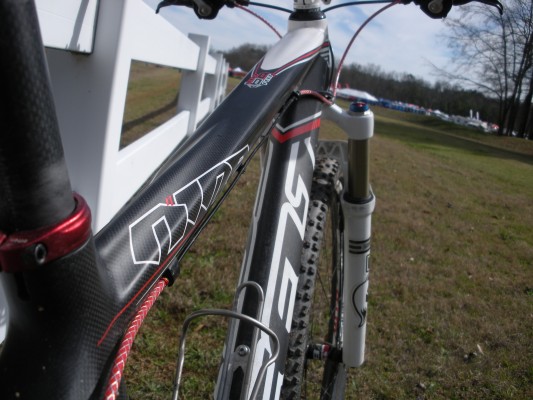 There is some subtle tube shaping, but the Nine Team is a fairly traditional looking bike.

Carbon does have some advantages over aluminum of course. Its lighter, and stiffer. Out of the saddle hammering feels great on the Nine Team, there is no flex to be felt at the bottom bracket at all. Every bit of effort that goes to the pedals goes to the rear wheel. The light weight and stiffness were especially appreciated when muscling the bike up a steepie in too-tall of a gear. 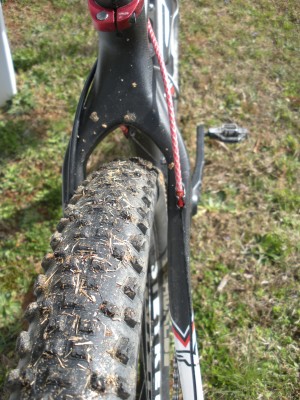 The square seat stays contribute to the stiff pedalling platform, yet they don’t beat you to death, and they provide pretty decent tire clearance fora race bike.

If You Wanna Go Fast

do yourself a favor and check out the Felt Nine Team. The carbon frame is light, stiff, and comfortable. The handling is fast, yet it never felt nervous or twitchy. This was my first time on a Felt bike, and I was impressed. I really, really liked this one. My only complaint is the price, $6,000 is not only a lot of money for a bicycle, but it’s a lot of money for carbon X0-spec bike. If you’re willing to step down to a slightly lower spec mix of X0 and X9 parts there are several much less expensive bikes on the market, such as theSpecialized Stumpjumper Expert Carbon29 for only $3,900 and Giant’s XTC Composite 29er 0 is even less expensive at $3,675. With the money saved you could upgrade to a really trick wheelset and still have money left over for a few race entry fees. The Nine Team frame is available for $2,400 which is also out of line with its competition; the XTC Composite frame is nearly a grand less at $1,450, and an extra $200 over the price of the Felt will get you Niner Jet9 RDO carbon full suspension frame.