For most of the country the first week of October is usually knee deep into fall and everyones MTB season is slowly switching gears. If you’re in Anchorage, fall has all but landed on the ground and old man winter is charging down that newly cut singletrack like an angry Grizzly. “Outerbike in Moab? Sign me up! By the way, whats an outer bike?”

Now in its second year, Outerbike is an annual event that brings dozens of bike manufacturers to Moab to let regular riders demo the latest bikes. For one price anyone can get admission to the 3-day event and the opportunity to ride any bike they choose on a network of trails ranging from novice to highly advanced and everything in between. Of course you also get the chance to talk with bike and component manufacturers and get your hands on a bunch of cool new stuff. For those who got in town early, there was the option to choose from several scheduled shuttle rides with Western Spirit Cycle Adventures on trails around the Moab area for the 3 days leading up to the event. Free skills clinics were also held during the week in a park located at the brand new Aquatic/Rec Center in Moab – all you had to do was sign up & show up. 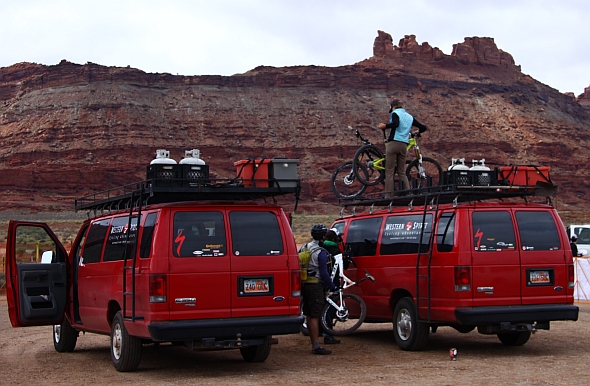 I can’t think of a better location for this event. The Moab Brand trails area has adequate space and parking for the event plus it’s right at the edge of a full range of trails. The paved bikeway from town through the Moab Canyon runs right past the front gate creating not only hotel commuting options but also a place to test ride the road and urban bikes that were available for demo. The event itself was very well organized and is a benefit for IMBA among other MTB-related organizations. The event staff were ever present, friendly, very helpful and seemed to pull this off without a visible hitch. I estimate there were 20 different bike companies there with a huge selection of bikes to choose from. Getting the exact bike you wanted to ride could require a bit of a wait, however the chance to try something you had never seen before was always there. Along with major bike companies there were booths from several component companies like Fox and Shimano. 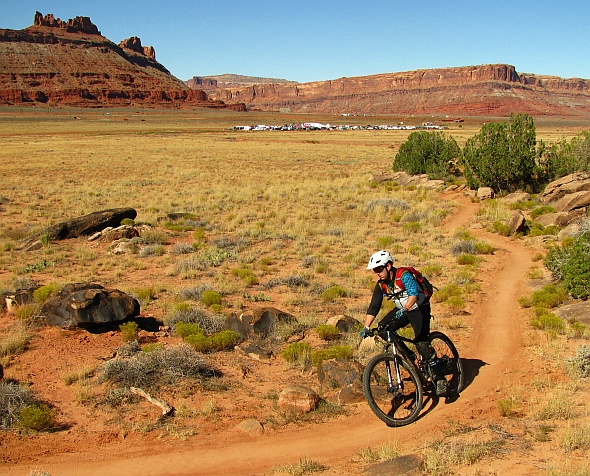 Continental Tires kicked off the event Thursday night with a showing of Klunkerz at the Star Hall in Moab. This is a must see movie for anyone even slightly interested in how we got where we are today – good stuff. Each day there was a different free shuttle destination from the event; on Friday it was the Mag Seven trails. On Saturday there was a shuttle to Amasa Back and on Sunday the shuttle dropped riders at Slickrock Trail. Check out a bike you want, and get on the shuttle – as many times as you want. Yeti Bikes had the largest selection of demos and was probably the busiest booth there. Want to ride an $8,000 Ibis? Or an Orbea? No problem, getting there early will help. Turner, Elsworth, Kona, Niner, Pivot, Giant, Intense and many others were there too. Spot had a selection of their belt drive hardtails that were very popular. 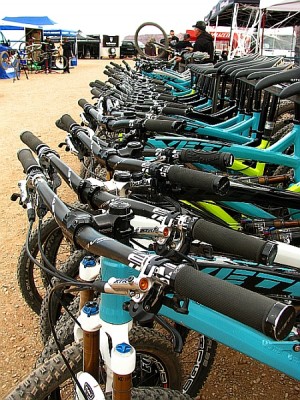 My friends from Alaska even showed up with the Fatback bikes just to kind of introduce them to the folks here. They brought four bikes since the bikes arent really ideal for this type of terrain however they couldnt seem to keep them on the rack – everyone wanted to try them. Pete even threw in his personal bike as a demo so they could have one more in the rotation – go figure. 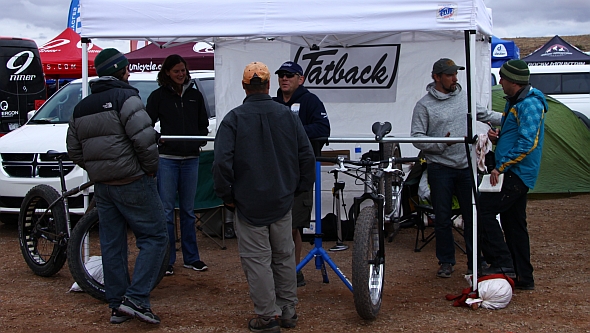 Lunch was served for several hours each day so no one missed it and consisted of fresh, locally baked breads and a full selection of cold cuts plus pasta salads, drinks, etc. After a few hours of hard riding the DIY Dagwood sandwich is pretty awesome! The steady stream of riders and bikes coming and going was almost dizzying and kept that constant buzz of excitement heavy in the air. Saturday was actually overcast and unseasonably cold for Moab but that didnt seem to slow anyone down – the down coats and ski hats came out and everyone kept right on riding.

I noticed at around 4:30 everyday the crowd thinned out dramatically – then I realized this is when the Beer Garden opened for those who wanted to partake. For myself it gave me a chance to talk with the manufacturers and others about their products in a more relaxed manner. I met Maurice Tierney, the original mastermind behind Dirt Rag Magazine. We talked for a bit, swapped stories and that led to an invite to a semi-private party at Poison Spider Bikes including some awesome tacos and several locally brewed beers. It was great having dinner and conversations with some of the industry’s movers and shakers and finding that no matter where you are from and what you do, we all just love to ride.

Not having been there last year I didnt have anything to compare this event to but this year there were over 850 registered riders. According to the locals Outerbike was at least 3 times bigger this year than last. Nice. With any luck next year will be even bigger, and I really hope they dont change a thing. 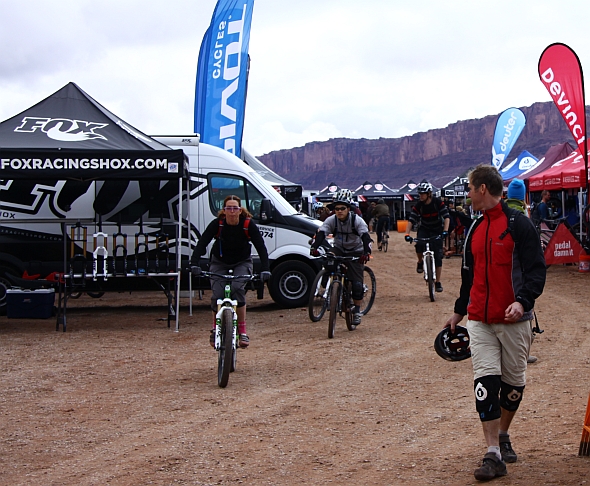 *Disclaimer: I’m not really in the market for a new bike so I wasnt shopping very hard. Nor am I very qualified in giving the high tech reviews on bikes as some of you are. I did, however, love getting to see the newest frames outfitted with components I have only read about. Outerbike is about the bike, but really, there’s so much more to it. I finally used a 2×10 drivetrain and can see some of the advantages. I also used a 3×10, several new forks, shifters etc. that were all incredible. After my first ride on a bike with new brakes I was compelled to drop my personal bike at Chili Pepper Bikes for a bleed and tune up.

I was disappointed in one bike that I was really anxious to ride but then completely surprised by one that I rode just because.’ That’s the whole purpose here I guess. Of all the bikes I rode the Santa Cruz Blur TRc stands out as light and just a whole lot of fun to ride. I have to say that the Pivot Mach 5.7 is the most amazing trail bike I have ever ridden – this will be the one the industry chases, within this category anyway. It ate up everything I could possibly throw it at and seemed to taunt me asking for more – is that all you got old man? I’m very impressed. 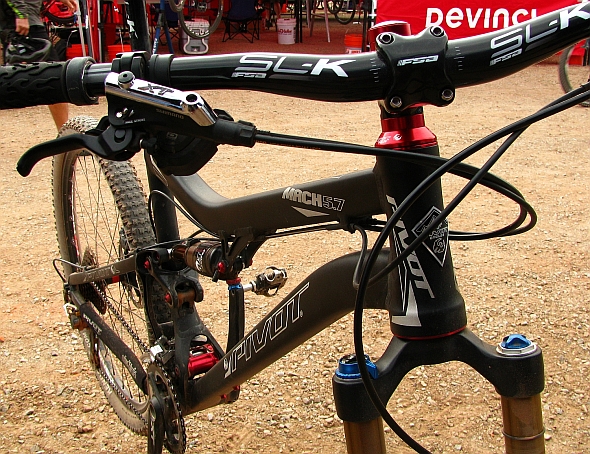 Bottom line is this was one cool event and a real bonus if you’re in the market for a 2012 bike. I can only see the popularity of this growing over the years – I know I will be here just to soak up the excitement if nothing else!

AK_Dan
Not much is known about AK_Dan, though the legend grows each day.

Sounds like an awesome time! I’m actually kind of surprised that there was only 850 people there… you’d think there’d be more of a draw than that.

Great photos as always Dan, and I love the look of that Pivot! Next I’m at an expo I’ll have to check one out…

man that definitely sounds like something that id wanna go to, especially after seeing all those new yetis!

Hopefully, you won’t mind me asking, but what was the total cost for everything but transportation?

I believe anyone can visit the event, to demo bikes however you paid right at $160 (with taxes) for three days admission, as many shuttle rides as you could do, the movies and lunch for all three days. I camped up @rshinn Sand Flats for $10 a night. The rides earlier in the week were a bit extra but at a discount rate vs. buying them yourself (check their website and the schedule and prices are probably still up there. Look at it this way; if you went to Moab, rented a new bike for three days and paid for shuttle rides for them 3 days that is just about equal or more than the price of admission to this event- plus you get to trade bikes whenever you want. Pretty cool.

Had to laugh because I’m in the 2nd to last picture above (on the bike in the jailbreak shirt to the left of the gent walking). Outerbike was a total blast across the board- organizers, guides, attendees, residents, surroundings, bike shops and other assorted establishments. I can’t think of a better way to blow $160 plus air travel, etc. to visit a place unlike any other in the US. I also happened upon Maurice and Poppy at Phil’s World near Cortez, CO a few days later. Quite a trail system there as well!

In my opinion, the organizers did one heck of a job this year. I had no trouble demoing what I was interested in but got there early each day to ensure I could find a L or XL. Some of what I heard during the festivities indicated that they might try to limit the length of time you can demo bikes next year- some attendees were keeping them all day and others were chucking them in their own vehicles and taking off for who knows where (probably Fruita, CO among other places- BAD FORM in my view).

I ran to grab a quick bite after returning from the Sunday Slickrock shuttle ride (while demoing a Pivot 429) and ran into someone who was coveting it. So I inhaled my food, took it for a very fast spin on Lazy-EZ and surrendered it. Turned out the gent went with a L instead of the XL I had demoed but we had a fun time comparing notes nonetheless. On a scale of 1 to 10, this was an 11.