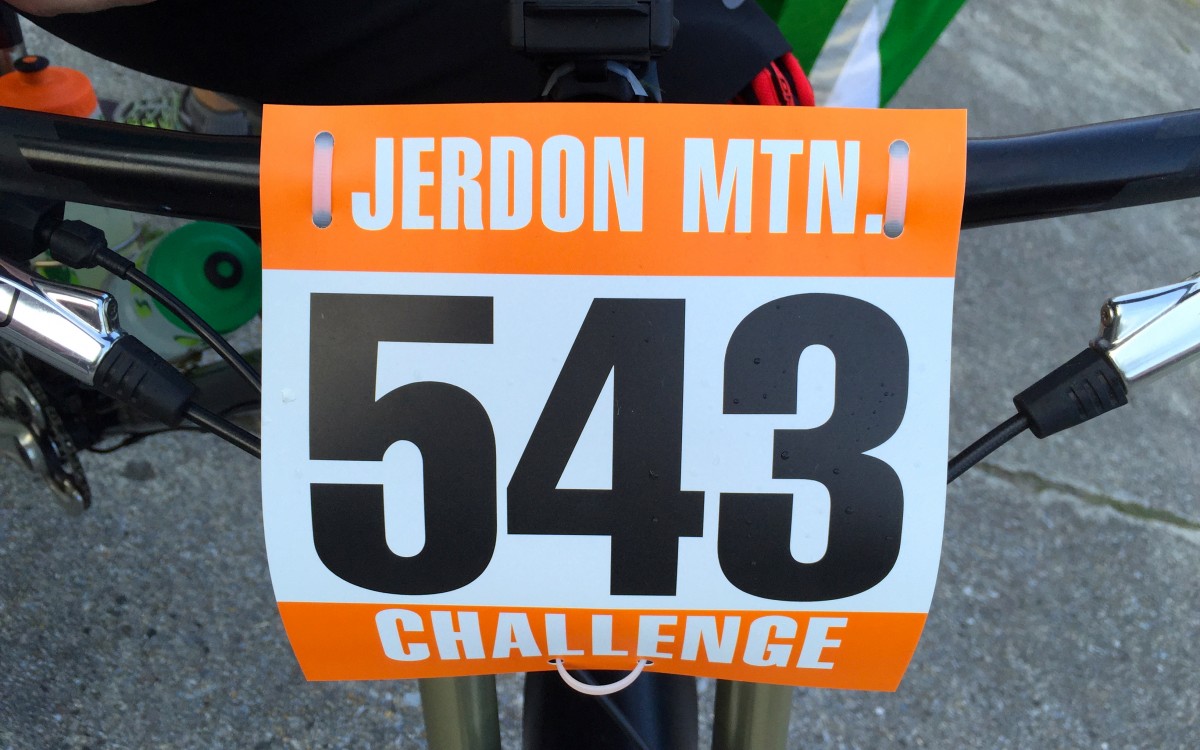 As I mentioned in my preview of the Jerdon Mountain Challenge (JMC), you can think of this race as an intro to the much longer (and much tougher) Off Road Assault on Mt. Mitchell (ORAMM). JMC takes place one day before ORAMM and covers much of the same ground.

At 26 miles in length with 3,600 feet of climbing, JMC is nothing to sneeze at, but the course is about as gentle as you can get in western North Carolina.

The race begins in the tiny town of Old Fort, NC, and heads east on US 70 for two miles before turning left on Curtis Creek Road. After another mile and a half on pavement, the course takes a left onto Jarrett Creek Road, which is gravel. Racers roll along Jarrett Creek for several miles, and eventually the road turns to doubletrack and then again into singletrack after 11 miles or so into the race.

The “real” trail starts at Star Gap. It kicks off with a ridiculously-steep right hand turn up the mountain. After that, it’s a series of eye-popping switchbacks that require equal parts momentum and body English to get through.

Once Star Gap tops out, it’s a wild ride down. The switchbacks on the west side of the mountain were every bit as steep and tight as those on the uphill side. It was crucial to keep your speed in check so as not to overshoot the tight turns.

At the very bottom of Star Gap is one of the more technical sections of the course. The right line is more direct, but it’s also filled with greasy roots and large rocks. The left line is the safer choice, but definitely not easy. A crowd gathers here to watch the inevitable carnage.

After bombing down Star Gap it’s another four miles of road and gravel to get to Kitsuma. The bottom of Kitsuma is a mellow double track ride that runs right next to I-40, but it doesn’t last long. Soon enough the trail kicks way up and presents another series of challenging switchbacks. There are two false summits on Kitsuma, so be sure to have your thumb at the ready to grab an easier gear. Once the descending begins in earnest, it’s a “buckle-your-seatbelt” kind of ride. The trail dips and swoops around turns, but also has its fair share of straight-down-the-mountain lines.

There are some chunky spots and a root garden or two, but it’s not an overly technical descent. However, the steepness of the trail can quickly get you in over your head. If you’ve never ridden Kitsuma, it’s best to play it a bit safe here. The final three miles of the race are on the road back into Old Fort. It’s fairly flat, so you can hammer to your heart’s content all the way to the finish.

The race started promptly at 8am under clear skies. A police escort led us down the road for the first few miles. It was a controlled start, but by no means neutral. The pace was quick, and there was plenty of jockeying for position.

By the time the group hit Jarrett Creek Road, the racers were well spread out. Jarrett Creek Road is a nice, rolling climb with a mellow grade and even a couple of views to check out. I was feeling good, so I kept the legs spinning at a good clip. While the road was nice, I was happy to finally hit some real trail around mile 11. Going up Star Gap, I tried to keep as much momentum as possible through the switchbacks. It required a combination of brute strength and correct body position to clean them. In typical Pisgah fashion, the trails were just a little slick, further adding to the difficulty.

Coming down Star Gap, I passed a handful of riders. One woman asked me if I knew how to ride what was coming up. I had no idea what was coming up and I told her so. What she was referring to was the gnarliest part of the descent, where a crowd had gathered. I came into it pretty hot, and by the time I saw that the left line was the way to go, it was too late. I was on the right side which had a couple of slick rock faces and chunky roots.

I tried to make the best of it, but got a little sideways as my tires went on opposite sides of a big root running parallel with the trail. Now, I was too far to the right and sliding towards a tree. My right hand hit the tree, stopping me immediately. I somehow got my right foot unclipped, swung my leg over the back wheel, and finished with a nice little pirouette, jumping to the ground unscathed. That earned a fair amount of cheering from the crowd.

After a few more miles of asphalt and gravel it was time to tackle Kitsuma. Like Star Gap, the switchbacks are tight and steep. If you’re feeling good, it’ll be over before you know it. If you’re having a bad day, it seems to go on forever. I was still feeling great and since I knew the race would be over soon, I pushed steadily up to the top. I did miss a turn near the top for a moment, but the rider that was behind me shouted out that I had gone the wrong way. I quickly turned around and caught back up with him on the descent.

Going through an off-camber left turn, I lost the front wheel in the loose soil. I smacked the ground pretty good, but thankfully I’ve got a solid tuck and roll. When I picked my bike up the handlebars were turned way out of alignment. In an attempt to straighten them out, I held the front wheel between my legs and ended up burning the shit out of my calf on the rotor. My leg was only there for a second, but I got burned badly enough for it to blister. The rest of the way down Kitsuma went great. No more crashes, no more burns. It’s a “must ride” trail for the area.

Once off the mountain, it was a fast three miles on the road to the finish. I saw the guy I was trying to chase down earlier and attempted to close the gap, but he was working with another rider and I was riding solo. Knowing that I had a long day ahead of me tomorrow, I decided not to burn any more matches. I crossed the line with a time of 2:28:37, good enough for a fourth place in the Vet Men category. While I rode hard, I did try to keep something in reserve for ORAMM.

The finish area in Old Fort is situated right next to Mill Creek, which was a great place to cool down and wash some of the grit off. A delicious post-race meal of BBQ pork (Carolina style, of course) from the Hobnob Restaurant in Brevard and brews from Oskar Blues capped off a great day of racing!

The Jerdon Mountain Challenge is a great race for someone that is working their way up to longer endurance races. The singletrack portions of the course are tough and require solid bike handling skills. You need to have your switchback and descending skills dialed.

However, there is plenty of road and gravel to make up time on the competition if technical trails aren’t your strong suit. In Pisgah, weather is always the wild card. It can be pouring on one side of a mountain and bone dry on the other. We really lucked out with awesome weather this year, but it’s something to keep in mind when choosing equipment, such as tires. You want something that will roll fast on the road and gravel, but you’re going to need some bite for the trail, especially if the rain comes.

If you’re interested in racing the Jerdon Mountain Challenge in 2016, now is an excellent time to sign up. Early registration for the event is currently $90, so save 25 bucks and sign up at Blue Ridge Adventure’s site now!