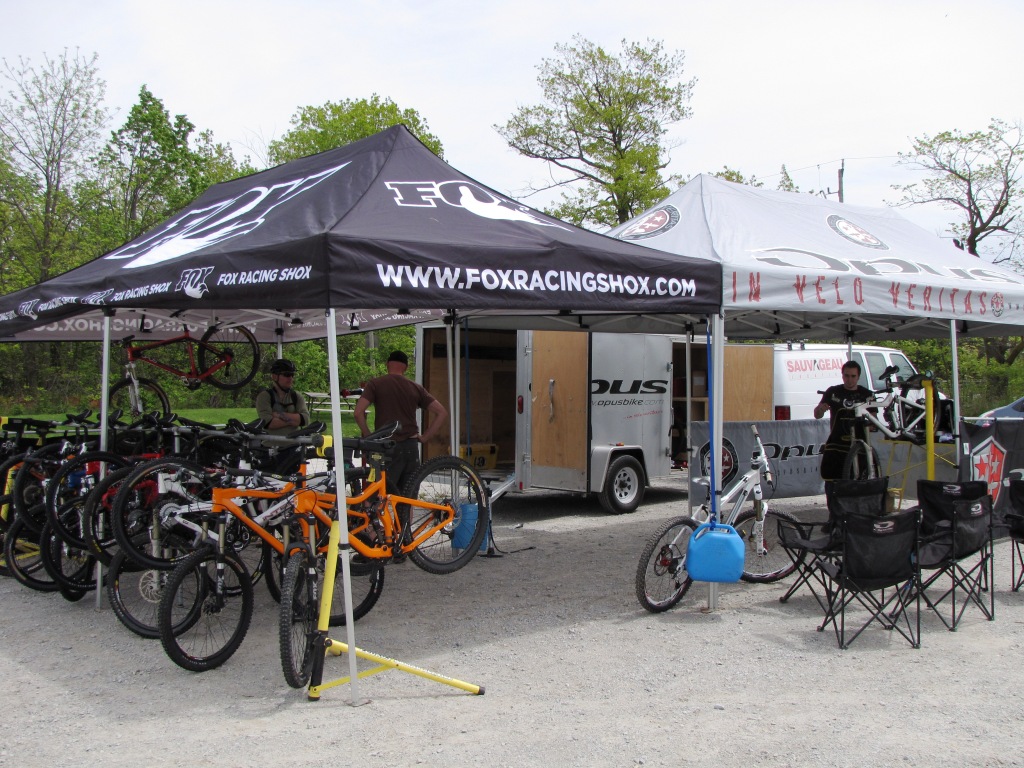 One thing I love about spring and summer is the abundance of demo days hosted by bike companies and local bike shops. I had a chance a few weeks ago to attend the OGC (Outdoor Gear Canada) test day which included both Opus and Intense bikes.

If you haven’t been to a demo event you should really make it a point to give one a try. For one thing, the factory reps are there and these guys and gals can typically answer any and all of your questions. Another great reason to attend is that you get a chance to ride several bikes back-to-back, giving you a real feel for how the bikes compare where it counts: on the trail. This is especially helpful if you’re stuck on the fence about which model in a line-up you want to purchase. Think about it: some manufacturers have over 50 bikes in their MTB line-up. Just imagine the amount of time it would take you to demo them at a LBS (that is if the bike shop has a test bike to lend you in the first place).

When you head out to a test event, be sure to bring your bike shoes, pedals, helmet, and a credit card and/or driver’s license. If you don’t bring your own pedals you may find yourself waiting for the right pedals all day. The credit card is used as a guarantee that you’ll come back with the bike. New bike plus open trail equals temptation for some folks to just ride off into the woods. Not saying that anyone here from singletracks would do it, but there are opportunists that just happen to swing by and think they can get away with it.

If you’re planing on testing any AM or DH bikes, check ahead to see if the companies will be demoing those types of bikes. Some manufacturers may shy away from bringing some of those bikes since a decent DH bike can run well over five grand and some companies aren’t willing to have a fleet of them trashed (let alone the increased liability). I know that may sound cheap for a company to think that way but let’s face it: having someone on an unfamiliar AM or DH rig trying their hardest to see what the bike can do is a recipe for a crash. 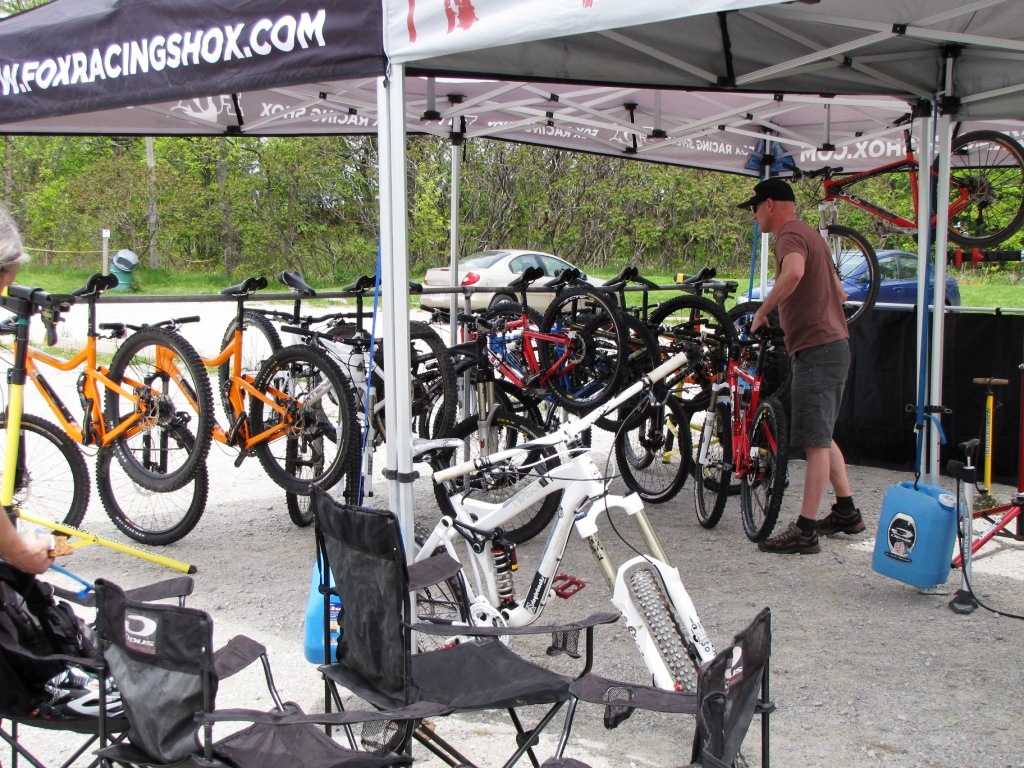 At the OGC test day I got a chance to hit a few new bikes including the new Intense Tracer VP with an XT build kit, The Intense Spyder, and the new Opus Clutch. I also did a back-to-back comparison of my modified Nelson FR bike with a bone stock Nelson FR (mine was so much nicer… shhhhh).

I spent a lot of my time at the test day talking with the OGC PR manager Sylvain B. Since I’m planning a few write ups on Opus bikes later this year I wanted to get a sense of what’s up and coming and not yet on display. It’s also fun to give valuable feedback to company reps that just might improve the next generation model.

On the trail I did notice that some of the bikes felt odd – almost like something was wrong with them – but I realized that feeling mostly comes from the fact that I’m so used to my own rigs. My advice is to be patient and get used to any test bike before you pass judgement – most bikes will feel unfamiliar at first. 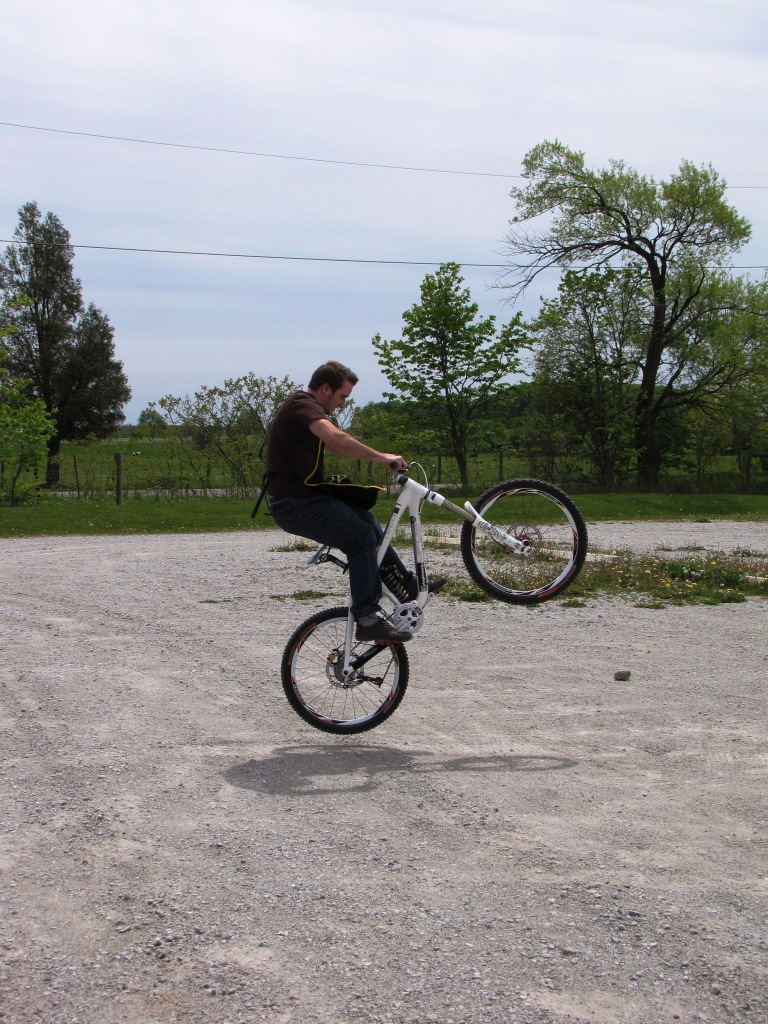 At one point during the demo I lent my Nelson FR to Sylvain, the OGC PR manager, and he ended up showing off his mad skills. I was amazed at how he could get the bike up on one wheel and bounce at least two feet in the air. Lesson learned: never bet someone a beer unless you know someone’s skill level first. Another great thing you learn about industry folk is that they more than likely come from a rich background in bicycling; in this case, Sylvain is an avid trials rider.

Check with your local bike shop and find out when you can attend the next test day. You’ll have a blast and you never know – you just might discover that dream bike you were searching for.