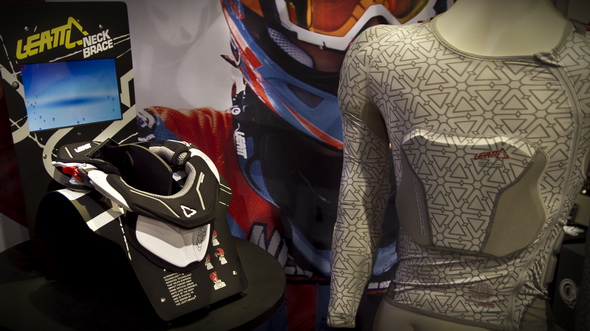 One thing I can never stress enough is personal protection on the trail, and Leatt has it going on this year. The really big news with Leatt is the price drop on the Leatt brace. Yes… you read that right! Now there shouldn’t be any excuses for not getting one if you’re a gravity rider.

Updates to the DBX Pro

Leatt retooled the DBX Pro and managed to keep the weight down, and added a bunch of improvements at the same time. I asked Phil how it was possible to get a price drop and redesign the DBX pro at the same time, and he responded that they decided to drop the premium brace bag, as well as the machined aluminum levers. The levers did not add to the performance of the brace, but they significantly added to the price. 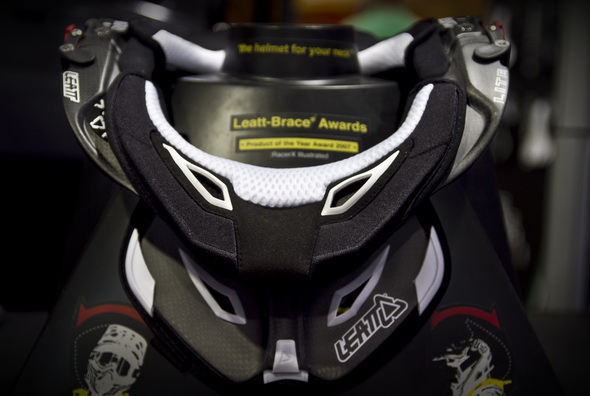 The key points still remain. The alternative load path is still there and has been improved by changing the design of the rear thoracic strut. The strut is now split, wider, and designed to allow for more adjustments with color coded “chips” that allow for a greater range of adjustment. 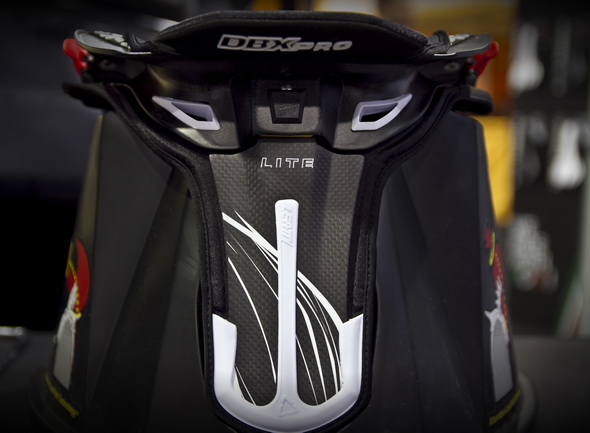 The other major outward change on the DBX Pro is the switch to the matte carbon finish from the gloss finish which, in my opinion, gives the brace a better look and feel. For the new everyday low price of $499 (US), you too can have your very own Leatt brace, and possibly save your own life. 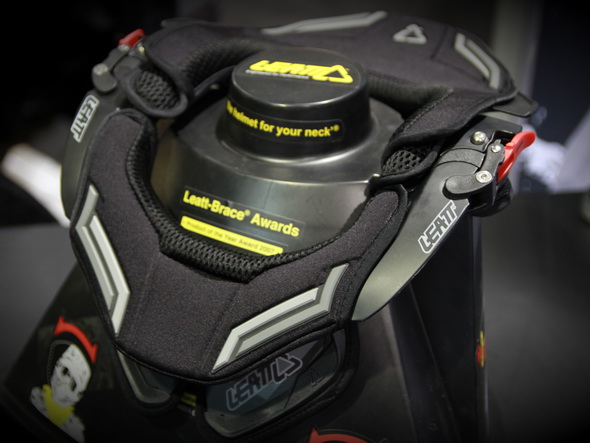 The all-new DBX Comp 4 is another really big deal, and has been totally rethought. A new sculpted split front design allows for independent movement of each side of the support. This split reduces the chances of “imprinting” marks after a major accident. When one gets into a major crash and the head rolls forward (tucking into the chest), that roll is not always straight-on. This allows for the chin bar of the helmet to strike only one side of the Leatt. Older designs would cause the brace to do its job and stop the chin bar of the helmet (and your head of course) from rolling, but the brace would localize the forces and “dig in,” creating a bruise at that area. Now, with the new split, each side of the brace can better track the body, reducing those “hot spots” upon collision. 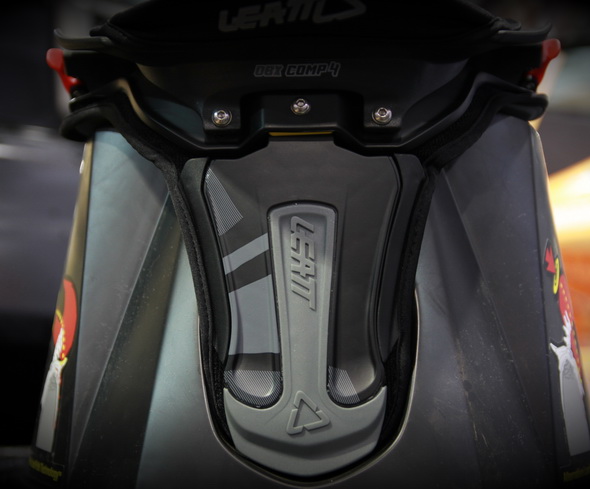 The same thinking goes into the new rear thoracic support. The wider, split design and the new color-coded rear strut chip make for easy tuning of the rear support. The cool thing is that the DBX Comp 4 comes in at $359. Again, it’s cheaper than last year’s Comp 3 by $40.

**NOTE** All forms of protection are designed to help prevent injuries when worn properly. I have seen people wear Leatt braces with regular open-face helmets, but THEY DO NOT WORK THAT WAY. Leatts only protect when used along with a full-face helmet! 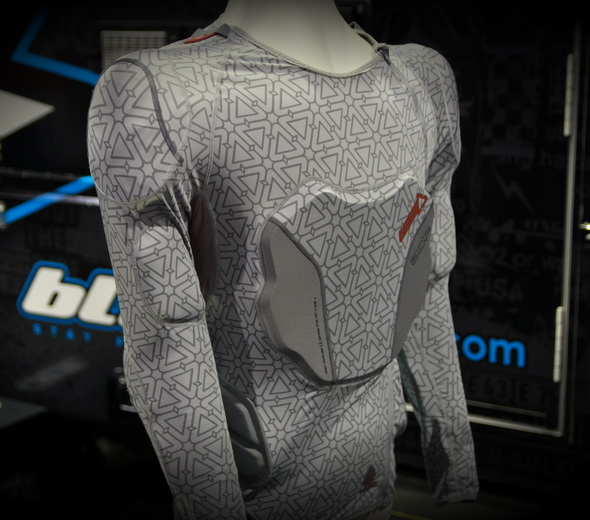 Leatt is not just a neck brace company. They also make a complementary line of protective wear to work with their braces: both soft armor and hard. The photo above shows an example of their 3DF body protector, which is CE certified. The viscoelastic foam that covers the back, chest, elbows, and sides are soft and, with a bit of body heat, mold to the contours of your body. When an impact strikes the foam, the energy of displacement resulting from the impact forces itself back to the original point of impact. That force dispersion results in less force being transmitted to the area it covers. There are three levels of protection, with the highest level shown above , a vest version, and vest with back-only protection.

Make sure to visit the Leatt website to check out the rest of their protection line-up as it is very impressive, with full-on hard armor and knee and elbow protection as well. 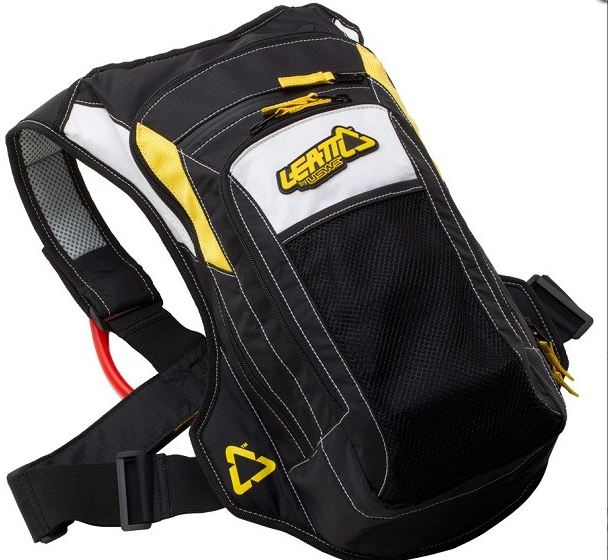 One thing that I found surprising was a hydration pack that will work with a Leatt brace. Phil handed me a USWE hydration pack to evaluate. The first thing I noticed with this unit is how well it interfaces with the Leatt: I can now run the Leatt without the supplied straps and just use the straps of the pack to hold down the brace. The cross-the-shoulder design also feels pretty secure, with no side-to-side play.

Look for a long-term review in the future!

Gear
A Peek at the Specialized S-Works Stumpjumper for the Upcoming...
Community
Swiss Sweep Women's Olympic MTB Race, with Jolanda Neff Taking...
Gear
New Ibis Exie Cross-Country MTB Frame is Made in Their...
Community
3 Takeaways from Olympics MTB and Why XC is the...
Subscribe
Login
Please login to comment
5 Comments
Most Voted
Newest Oldest
Inline Feedbacks
View all comments

Wow, just imagining the force your head would have to have to leave an indentation on your chest… ouch! Gives the idea of whip lash a whole new meaning!

Well…Speaking from experience…I did leave a mark once on a big head first crash…I was so bad that I had bruising at the sternum and snapped the back lip on the Leatt…But saved my neck.

@iansimpson
chest padding good. had a friend that hit a jump wrong, not sure what he landed on, but the chest trauma from the fall caused an aortic dissection.

Was your friend using a Leatt?

Was the dissection thoracic or abdominal? Either way not good. That sounds pretty bad.

no leatt. unfortunately only a full face, gloves and leg armor. i wasn’t there at the time but he was in a coma for awhile and hasn’t yet made a full recovery. on a positive note, he is appreciating life and is back with his wife and kids.

i seldom wear chest protection, but just a note that there are those times it may be the most important piece of armor you can have. fortunately for us such an injury from chest trauma in this sport is very rare.