“Is this trail legal?” I asked as we ducked onto a sliver of singletrack tucked into a park I’d never noticed before. I felt like a dork for asking, but still, I was a bit concerned.

“No one is on these trails at night,” Nico casually replied. This was my first time riding with Nico, but I instantly felt like I could trust him. His incredible confidence on the bike lent an air of truth to whatever he said. Of course, he didn’t answer my question, but his response was good enough for me.

It was 2009 and my first night ride with the Faster Mustache guys. I had recently connected with one of the ride organizers, Chris, through Singletracks, and he invited me to meet in front of a local breakfast joint a couple miles from downtown for the weekly ride. I showed up at 8:30pm with my single, 150 lumen helmet-mounted light and a red blinky light on my seatpost, not sure what to expect.

I introduced myself to Chris for the first time IRL. A few other guys showed up–some of them members of the Faster Mustache race team, others just along for the ride–and around 8:45 we fired up our lights and merged onto the street. At the top of the hill, less than a quarter mile from where we started, Nico made a right turn onto the sidewalk and hucked his Santa Cruz into the grassy park. 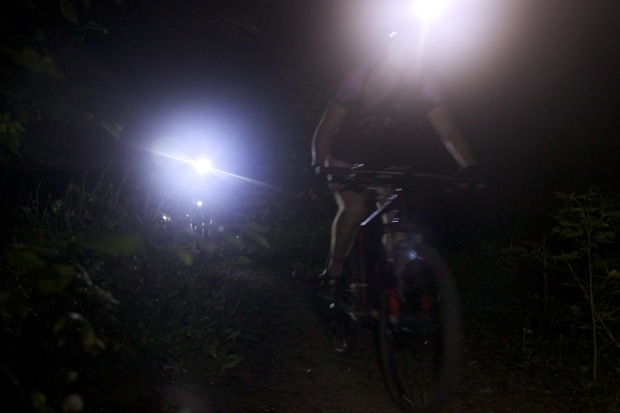 The line Nico rode through the park, while not defined, was clearly very calculated, hitting every rock, root, and patch of dirt on the way down the hill. Toward the bottom near the playground, a group of guys were standing in a circle kicking a hacky sack under a streetlight and Nico hopped off his bike, butted his way into the circle, and kicked a few turns before mounting his bike again.

Did he know those guys? What kind of ride was this?

We had just started, but I could already tell this was going to be a fast ride, and unlike any ride I’d ever been on before. I wasn’t used to mountain biking with faster guys–no offense to my usual riding partner, mudhunny. Nico and at least one of the other guys was riding a single speed, and they were all leaving me in the dust. The only thing that kept me holding onto the back of the group was my fear of being left behind in the dark, as I quickly realized I had no idea where we were. 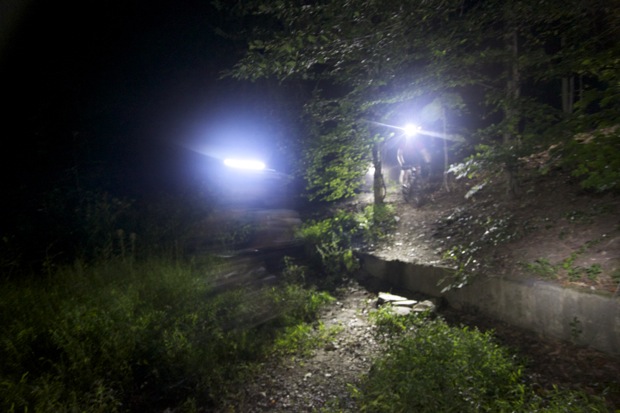 Atlanta is a big, dirty city with small pockets of trees in places where the land is too steep or low-lying to build anything. I had been living in the area for a couple years, and from regular jogs I was aware of some short trails through parks and vacant lots… but I had never thought to ride my bike in those places. None of the trails were particularly long or exciting but taken together–and given their proximity to my house–it was like discovering an epic trail right outside my door.

After popping out of the park, we hopped onto the road for a bit and before I knew it, we had ducked into a linear park with wood-chip trails that paralleled the road. I was starting to get the hang of it–get off the road and onto the dirt whenever possible, and repeat. Still, I had no idea where we were, and I was worried I was slowing the other guys down.

The next trail we hit was located on a college campus and having jogged there before, I knew bikes technically weren’t allowed on the trails. But this was follow-the-leader, so I brushed aside my fear of breaking the rules and allowed myself to enjoy the oh-so-sweet, forbidden singletrack. Eventually the trail popped out at a road, and the guys were waiting for me to make sure I didn’t get off track. That’s when I knew this was a good group of guys and that I would be back again for another ride.

Around 11pm, I started to recognize the park where we started and I was relieved–I had survived! My light was still burning bright (well, as bright as 150 lumens can burn), and my bike was still rolling. At this point, the guys slowed their bikes and pulled up alongside each other on an imaginary line in the grass facing a darkened tennis court at the top of a 50 foot hill.

Seriously? After riding more than 20 miles in the dark, the last thing I wanted to do was race these really fast guys up a steep, grassy slope.

I put my head down and spun my pedals as fast as I could. Toward the top of the hill I saw there was a bottleneck and we were now riding shoulder to shoulder, vying for the best line. My heart pounded and I wanted to throw up–and then it was over. Somehow I didn’t come in last place and I was thrilled to have completed my first night ride AND my first hill sprint. 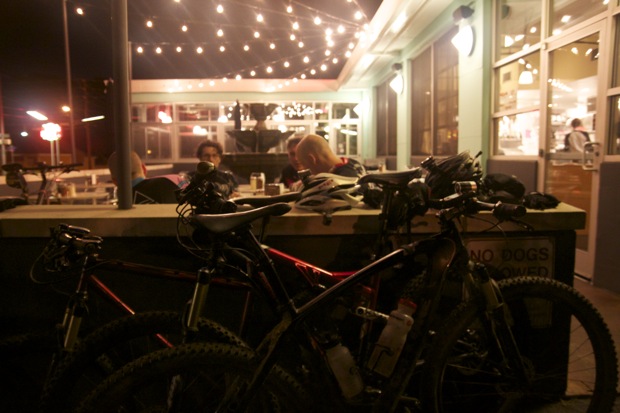 We soft pedaled a couple blocks to a pizza place where we would end our ride. I was exhausted, but on such a high at having been introduced to real mountain bikers living in the city and honest-to-goodness dirty trails in my ‘hood. Everyone pitched in ten bucks, and we shared a pitcher of beer and a large pizza, which was easily the most delicious midnight snack I’d ever had.

Over the next few years we would explore new trails, meet new riders, and come close to disaster on more than one occasion. Stay tuned for more adventures in Atlanta night riding.

Oh, I forgot to mention that I joined in on a variation of this ride as well (this past summer), and it was such a fun time! Riding urban trails at night is truly a unique experience, but the interesting combination of different bikes, riders, trails, and scenery, is just great.

And on the version of the ride we did, we rolled through a skatepark and nailed some bowl laps and jumps. So fun!

Write-ups like this, Jeff’s write-up from 2011 (recently reposted on FB), and the growing desire to not lose my legs this winter, have me very excited to give this a try. The lights are on their way, extra mount is inbound, and all that is left is for me to join the local group on some of the many trails around DC and give it a shot.

Is there a group in DC that does this? I’m in Alexandria, but would definitely join something like this.

MORE hosts a number of night rides all over the place. Many of the land managers require a leader, sweeper, and at least one person certified in first aid, and MORE makes sure they are there.

They host rides at Wakefield, Rosaryville, Potapsco (kinda far for you), Schaeffer Farms, and a few other locations. There was another group at Rosaryville scabbing along and generally being douches, but the MORE riders are a good group of people.

Wakefield might be perfect for you, with Rosaryville a close second.

Sweet! Thanks for the info. I’ve done Wakefield during the day, but trying it at night would definitely be cool.

There is a MeetUp group in the DC area, as well, that does some night riding. MORE will be your best bet, as they converse directly with the land managers and set up specific dates/times for rides. Otherwise, most places around here won’t let you.

THAT is a cool little story my friend…

Awesome! Living on the wildside!

Sounds like a lot of fun. It reminds me of my first year of college when my friends and I would ride around campus at night and find stuff to jump off of and what not. Not quite as exciting but still good fun.