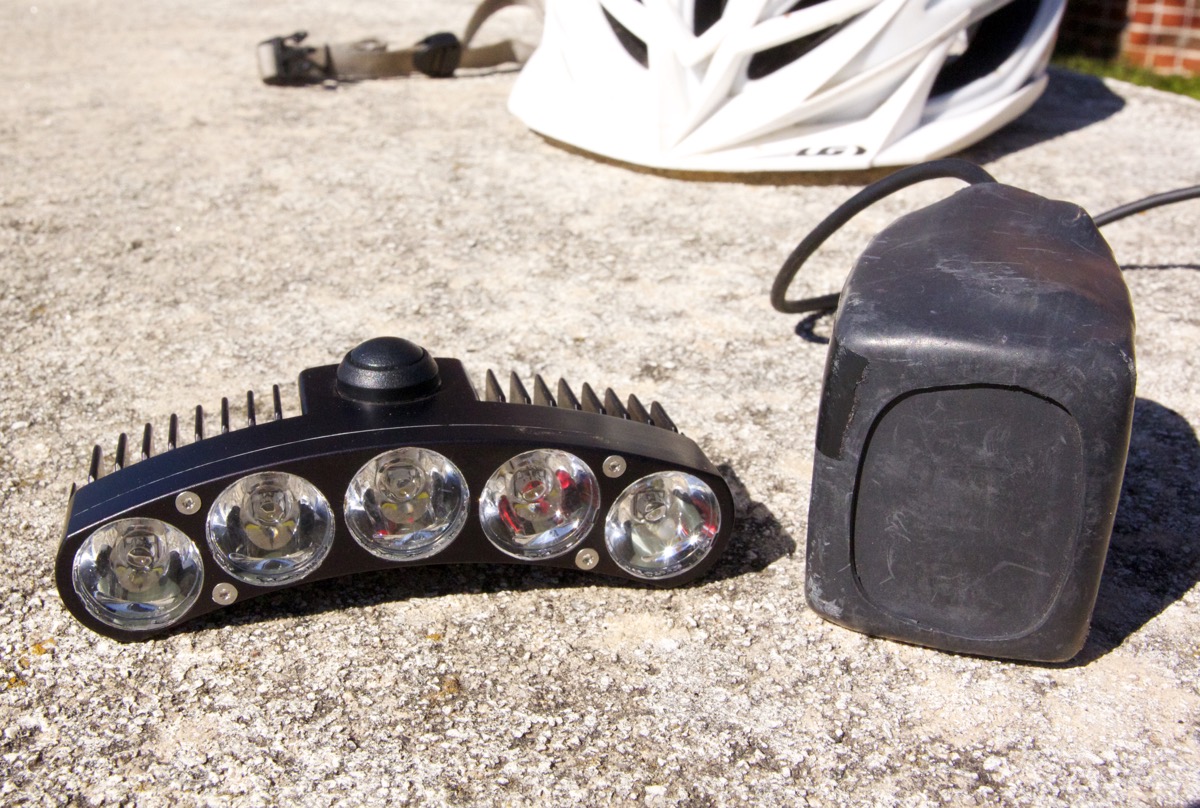 We get asked to review a lot of bike lights but truthfully, many are just knock-offs and re-brands of existing light systems. So when Grady from Trail LED reached out about reviewing a light after reading my non-review of the 5,000-lumen SolarStorm, I was hesitant. Then I realized this is the same company that produces the $1,100 Halo, easily the most recognizable, impossibly-bright lights on the market today. I had to see for myself what these lights were all about!

A few months back I saw that one of the bike magazines reviewed the Halo but the online article I read didn’t include a single photo of the light at night. I would be reviewing the DS, which is basically half a Halo (3,000 lumens instead of an eye-searing 6,000 lumens) so I was interested to see just how the light performed. After just the first ride I had my answer: it performs incredibly well and is the most illuminating light I’ve ever used. 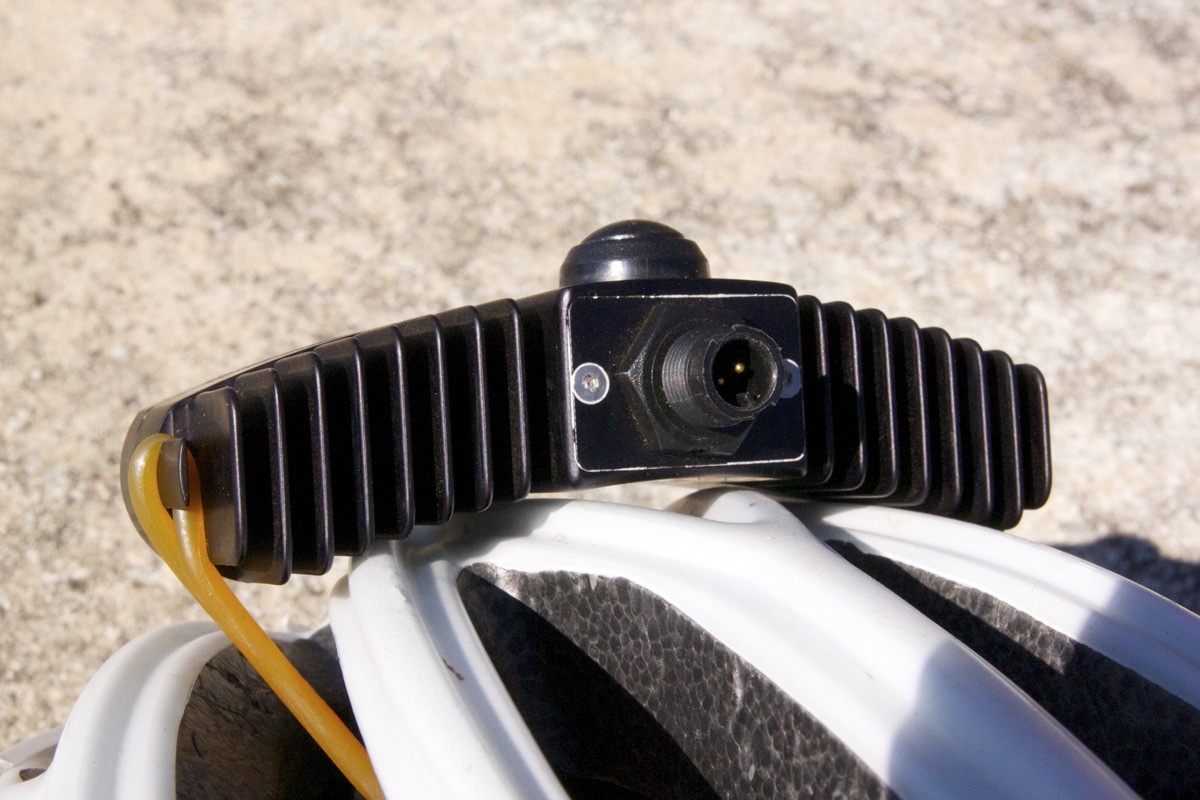 The Trail LED DS features a dead-simple mounting system with just two parts: a set of silicon bands and a 3D-printed stem platform. If you’re mounting the light to a vented helmet, just loop a single band around a heat sink fin, thread through the helmet, and attach to a fin on the other side of the light. Done! During my tests this proved to be completely secure and much to my relief, the custom polyurethane band didn’t melt to the heat sink. 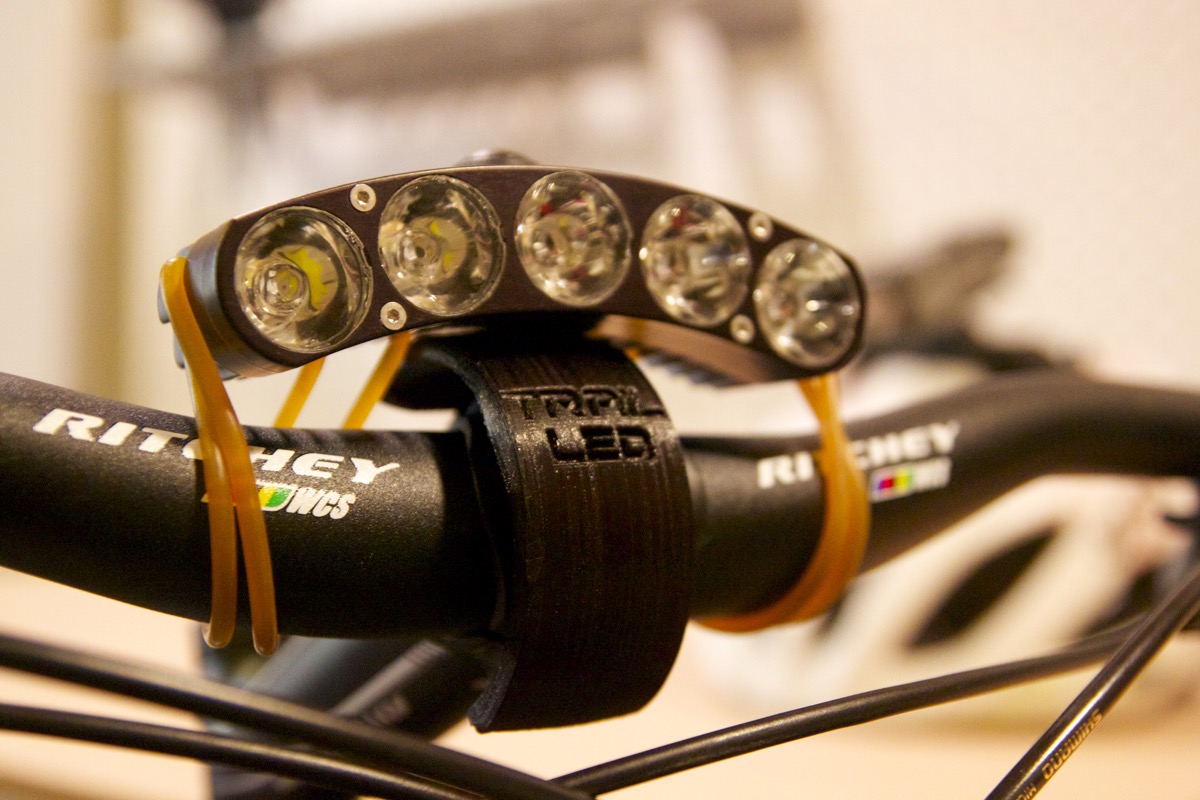 For those who prefer a bar-mounted light, technically you’re out of luck. The Trail LED actually mounts to the bike’s stem, which helps alleviate the bar real estate crunch many of us are experiencing these days. (Lockout remotes, GPS, dropper remotes, shifters, bells, and brake levers tend to crowd even the widest bars.) The light mounts to a 3D-printed plastic platform which clips to the stem plate, and after playing a bit of cat’s cradle with two silicon bands, the light is mounted securely.

The light unit features 5 LEDs but the overall package weighs less than it looks like it should (100g according to the company).  The battery weighs 285g and appears to be wrapped in recycled bike tubes, which is a nice eco-touch, though truthfully it doesn’t look nearly as dialed as the head unit. 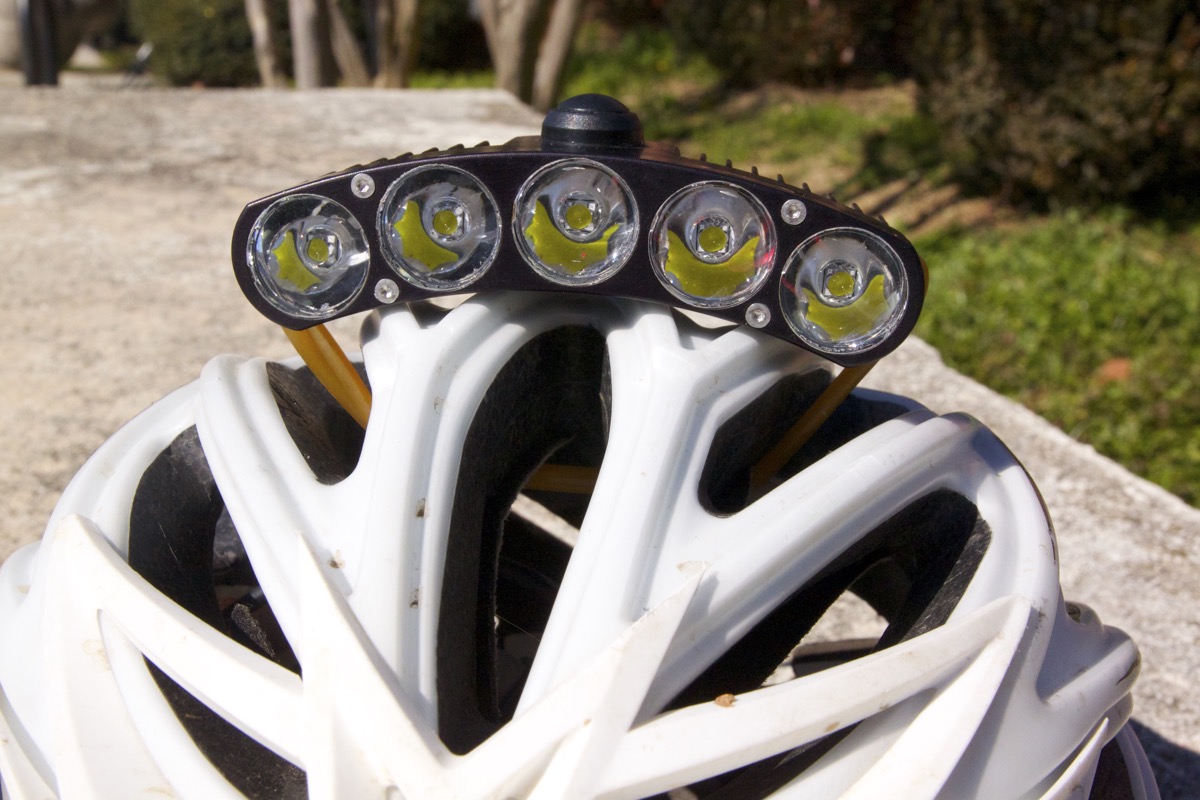 Trail LED notes the battery features a 1:1 charging ratio which means runtime ( 2 hours on high) equals the charge time. For 24-hour racers this is huge because it means you only need two battery packs to ride all night. And if you can get away with running the light on low (believe me, you can unless you’re really flying!) you’ll get  4 hours of runtime for just an hour and a half of charging!

On the trail (and in the lab)

Before hitting the trail I took the Trail LED DS into the lab–and by lab I mean my windowless basement–to see how its brightness and beam pattern stack up to other lights. In terms of brightness, the Trail LED DS was near the top of the chart (the Nightrider 2200 Pro LED actually came out slightly brighter, though this wasn’t a completely scientific test). The beam pattern is oval shaped–not arc’d as I would have expected based on the shape of the head unit–and fairly compact.

Out on the trail, the Trail LED DS set the woods on fire. Seriously, that was my first thought when I turned the light on high–it seemed as if everything around me was instantly ablaze. You can even see it in the photo above–the trail is white hot and even the periphery is well illuminated (a little surprising after my beam pattern test in “the lab”).

As a helmet-mounted light, this is all riders and racers alike will need. It’s seriously the brightest light I’ve tested and it has taken some adjustment to go back to less powerful lights for night riding. We’ve all heard the expression “I’ve seen the light”–well once you see this light, you’ll have a hard time settling for anything less than 3000 lumens for night riding.

Ok, maybe that’s a bit of hyperbole, so I’ll bring us back to reality: this light retails for $549.99. That’s not cheap, even for a 3,000-lumen light, but don’t forget: bike lights aren’t all about lumen count. Riders will be hard-pressed to find another light that features a 1:1 charging ratio or even a system as lightweight as this one. Perhaps the best bargain of all is the DS Race package which includes a second battery for true continuous runtime for just an extra $35 ($584.99 MSRP).

The Trail LED DS is a super-bright and unique lighting system designed with the racer in mind. No fussing over this light–just strap one on and set the trail on fire!

Updated 5/11/2015 to correct runtimes and clarify the material used on the bands is not silicon but “custom polyurethane that [is] Ozone, UV, and abrasion resistant.”

And mounted with RUBBER BANDS!!?? Please! This is an outrage!

The bands are made of silicon rubber, which is resistant to both melting and freezing and the tensile strength and elasticity is much greater than rubber used in rubber bands. They won’t stretch out with use and won’t dry out or become brittle with exposure to the elements.

Is this a joke? I’ll stick with my 2 solarstorms which I got for $17 a piece, which you bashed. They are more than bright enough. I’ve been night riding since the first nitesun came out that had a lead acid battery that mounted across two sets of water bottle mounts. These cheap little LEDs are amazing.