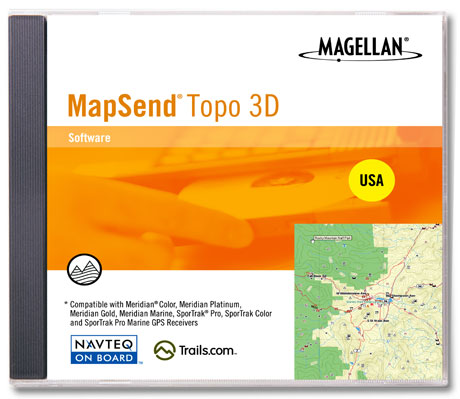 I purchased the Magellan eXplorist 400 “Wilderness bundle” a couple weeks back and I’ve been using the included MapSend Topo 3D USA software for sending detailed maps to my GPS receiver. I was quickly amazed at the improved utility of my eXplorist 400 yet somewhat frustrated with the whole process.

The information contained in the MapSend software is mega-detailed– from 20-foot contour lines to the bank branch on the corner to the neighborhood restaurant you *thought* only the locals knew about. Unfortunately this level of detail comes at a price– large data files– and most GPS units don’t have enough memory to handle an entire country’s worth of data at once (even if you DO have a 2Gb SD card). MapSend, like other mapping software, allows you to select just the areas of data you need– say your town or the park you plan to visit– and puts just that data onto your GPS.

Selecting detail areas or “regions” as MapSend calls them is as simple as drawing a rectangle. Of course not everything is rectangular in this world so it would be nice to be able to create regions in other shapes if you were, for example, planning a road trip from North Carolina to Maine.

Once you’ve created your regions it’s time to send the data to your GPS– but if you have a newer GPS unit with a USB connection like the eXplorist 400 you’re out of luck– MapSend only connects to serial devices. Instead you’ll need to export the data to your hard drive and copy the data to your SD card reader (or connected USB device) using Windows Explorer. Importing data is just as frustrating– no support for GPX files so you’ll need to convert data you download from the web to Magellan’s .trk format. Grrr.

Using the detailed map data on your GPS requires one more step– selecting the data on the GPS itself. I won’t go into the instructions here but it took me at least 15 minutes to figure it out (though admittedly I skipped the included guide). Out on the mountain bike trail the maps looked great– topo lines appeared when I zoomed in and the names of nearby roads revealed themselves like magic. At times the data was a little bit too good– I honestly felt like some of the adventure of mountain biking was gone. I knew when hills were coming, how far it was to the next descent, and what to expect around every corner. Maybe too much information is a bad thing?

MapSend is definitely a solid program and once you get used to the annoyances it will do the job for any adventurer. Remember you don’t always need to look at your GPS screen when you’re out in the woods– it just might spoil a surprise!