When I was informed I’d be racing in the inaugural Clif Bar Cykel Scramble due to my amazing prowess on a short-track with obstacles and ramps and jumps (or because the first-stringer was called away to a wedding and nobody else could/would do it), I was confused.

“A relay race thing with stuff in the middle. One bike, four people. I think there’s beer.  Good you’re in!  Bye.” And so I was. The Marin County fairgrounds was transformed into an obstacle course with wall-rides, sand pits, log jams, keg jumps (Lagunitas), and lots of blinged-out bikes and riders. There were three levels of competition to choose from, each with a short tag line.

We were toasters, and our bling-mobile was a “comfort bike” by Specialized, whose official name currently escapes me. 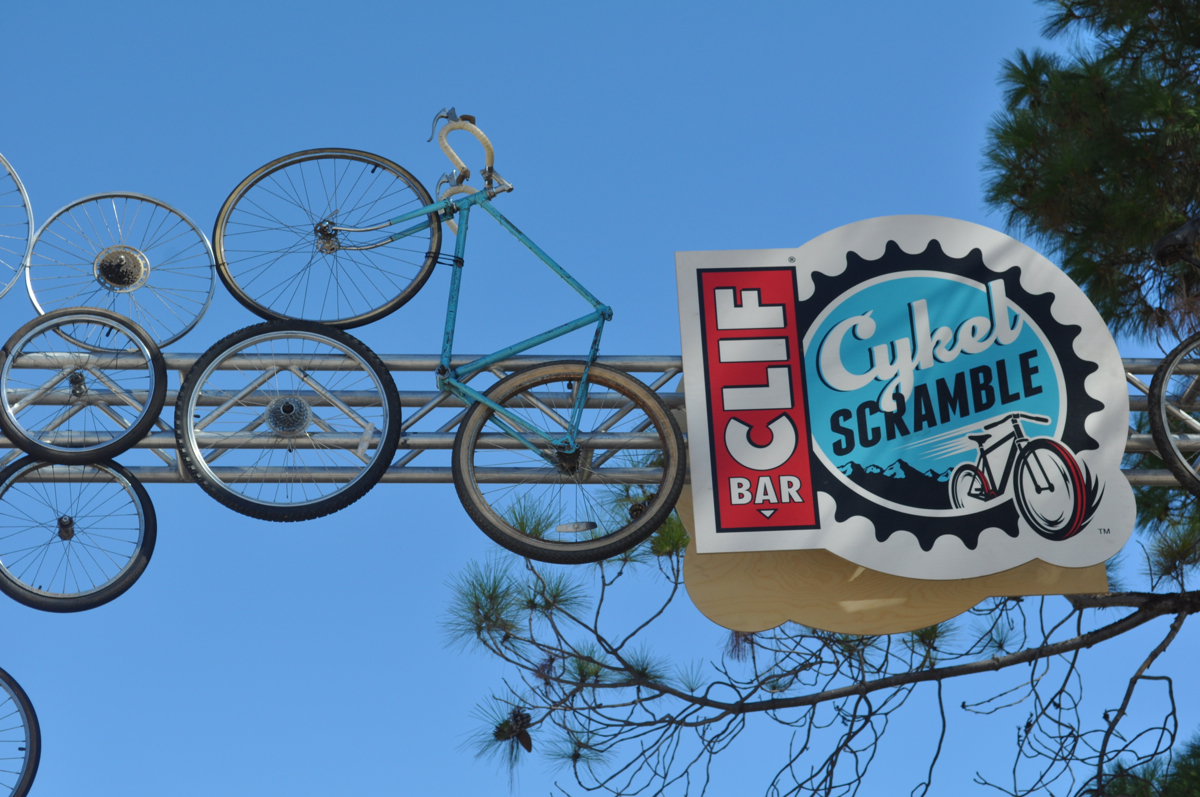 When our team captain rolled that beauty out, it got kind of quiet. Jim rubbed his chin, Lou  cleared her throat, and a small whistle escaped my lips. “See, it’s real easy to get on and off ’cause of the step-through frame.” Bronsons, Ripleys, and Rubions trotted by and winked at our mount. “Only thing is, don’t use this gear, or this one, else the chain will fall off.” Gulp.

When our race was called, we assembled in our assigned “athlete paddock.” That made me feel alternately bad-ass and vaguely goat-like. Our team captain took the first lap and sure enough, as he rounded the bend and into the tractor tires, our collective face fell as he dismounted and frantically fiddled with the chain. He ran the bike over the line and into our goat pen where we bleated our angst. Not only had the chain fallen off, the entire derailleur had snapped, and dangled like a grease-encrusted dingleberry. It was not pretty.

For the remaining laps in the first round, my teammates and I paddled the thing around the course in Flinstone’s fashion, the step-through feature now proving its value on the ramps and keg-jumps we had to dismount for. As we clearly did not secure ourselves a spot in the top four with this clown-like performance, we’d have to go to a shoot-out round if we had any hope of making the finals. A friend loaned us an Ellsworth, and we were back in business. 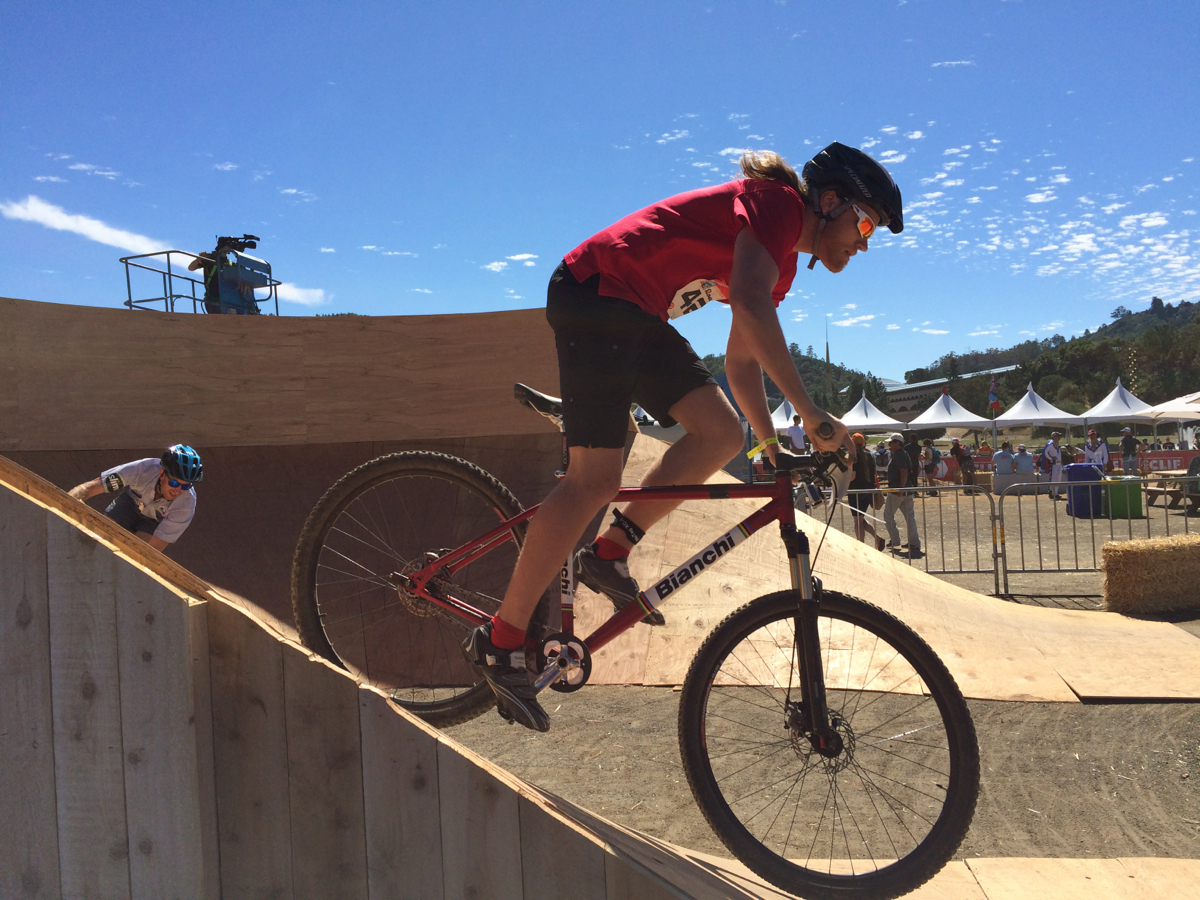 While we waited for our chance to redeem ourselves, there were food trucks and a Lagunitas brewing booth to be patronized. Competitors were treated to all-day access to the Athlete Cafe with the price of admission (which was $0, by the way…), and quite a spread was available. Lamb, chicken, and veggie kabobs, greek salad, quinoia, tzatziki, pita, humus and more. A beer calmed my race nerves, and now we were up again.

The Ellsworth made a fine steed for our team captain, who sailed through the course. I was up next. It was neat how much faster you could go with pedals. I attacked ramps that I thought I mightn’t, and rode the sand pit with finesse (if I do say so myself). I even heard the announcer say “…and Marin Bike Coalition in third!” I was thrilled. Then came the doohickey obstacle that contained no table top, just an upside down “V” with a log at its apex. There is surely a name for it, but since it is absent from my lexicon, I’ll call it The Biffmaker. I cleared the top with the least possible amount of forward motion, came to a teetering halt at the pinnacle, watched my front wheel head for that small but very attractive space between the plywood and the rail at the bottom. Target fixation fully engaged, I stuffed the wheel into the fence like I was trying to make a statement.

All my parts appeared to be attached and in working order, and I had just the right amount of blood coming from my left knee to earn some honor. I bounced up, did some kind of stupid victory salute, and finished my lap. Still not managing to land one of the top two spots, “crowd favorite” was our last and final chance. While we got some mileage out of the whole dangling dingleberry derailleur thing, it wasn’t enough. 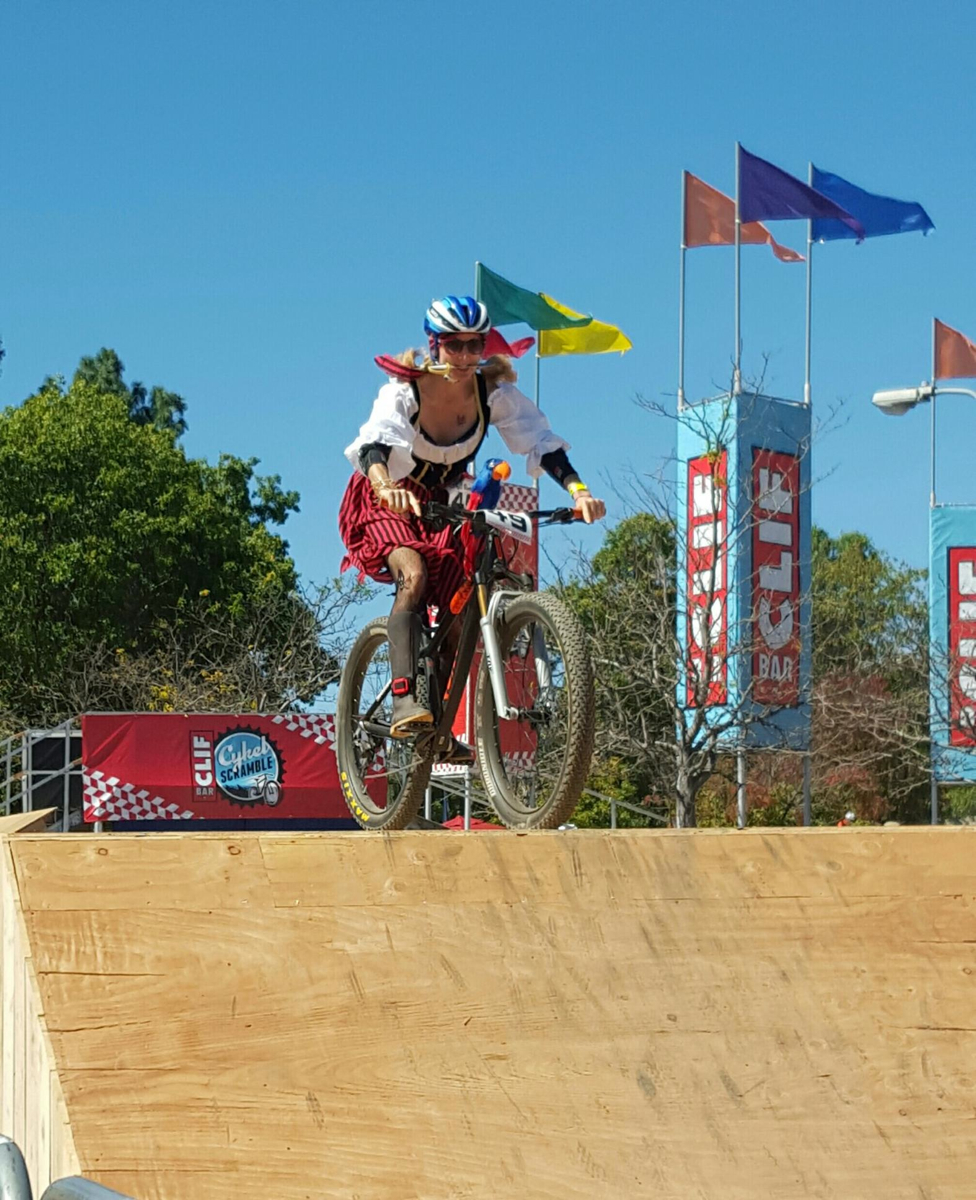 This meant we were free to drink (free) beer and watch the games. Our heckling at the keg jumps only worked on the lady pirates who ran the course in full regalia, each with a plastic sword in her mouth. After significant harassment, on lap three, the bravest one got a twinkle in her eye and made a bee-line for the big one. It is my hope that she felt richly rewarded by our elated cheers. In the end, Pigeon Press won the Coasters category, The Washed Up Wakeboarders won the Toasters, and the Jailbaiters won the Roasters.

A hearty-but-friendly rivalry between the National Interscholastic Cycling Association (NICA) and the NorCal High School Mountain Biking League made for great spectating, as did watching the Jailbaiters, made up of pro riders Ken Wells, Eric Porter, Kirt Voreis, and Carson Storch. These guys were real crowd-pleasers on the ramps and jumps, getting mad air and loving every minute of the wild cheers each trick brought. Live music by the Cold War Kids topped off a day of incredibly-silly fun and I can’t wait to do it again. If anyone will have me…

Progression
How to Ride Flat Corners on Your Mountain Bike
Gear
Harley's New Electric Hardtail [Gear Watch]
Gear
Would You Rather Ride with No Suspension, or No Dropper...
Gear
We Tested 5 Tubeless Tire Sealants to See Which Ones...
Subscribe
Login
Please login to comment
2 Comments
Most Voted
Newest Oldest
Inline Feedbacks
View all comments

Simile of the week right here!!! Lol, love it!!