The 50-mile-long True Grit Epic 50, and its companion race, the True Grit Epic 100, are two of the most difficult mountain bike races held in Utah each year. For many, racing 50 miles is difficult by itself, but True Grit takes things to another level entirely. Most of the course consists of rugged singletrack, which can tire riders out very quick if they are not prepared. The True Grit Epic has continued to grow as more mountain bikers step up to the challenge to see if they can complete such a hard race. This year the event sold out with 600 racers toeing the line.

The race takes place in Saint George, Utah, one of the most popular and sought-after places to mountain bike in the USA. The race course has a bit of everything including road climbs, fast and flowy singletrack, and some very technical trails that test riders mentally and physically. One of the most technical trails on course is the Barrel Trail, which is so technical that most people have to walk down the first portion.

Last year was my first time racing the True Grit Epic 50, at age 15. I entered the race in the 14-29 men’s class just hoping to finish. (The 2018 race included a separate Juniors division for riders ages 14-18.) I was excited to compete since not many juniors had completed the True Grit Epic. To my surprise, I ended up taking first in my category, and it was one of the most fun, yet most difficult, races I had ever completed. Of course immediately after the race I told myself it “sucked.” But looking back at how well my race went, I realized how much fun I had, and begain looked forward to racing it again.

For 2018, I raced as a part of the Pivot-Competitive Cyclist team, and entered the 75-strong, Open Men’s category with all the top dogs, at just 16 years of age. It was very intimidating knowing that I was going into a race with legitimate pros! I wasn’t sure where I stood compared to a lot of the people there. To make matters even worse, I was sick a couple weeks before the race.

Getting sick a couple of weeks before a race may not sound bad, but it affected me pretty significantly. I even considered skipping the race because I started to have breathing problems. I’ve always had anxiety that affects my breathing, but it was very bad following my illness.

I saw the doctor multiple times, and that’s when we decided that I must be having some sort of anxiety attack due to the stress of taking the ACT at school. Luckily, once ACT testing was over, I was less stressed and ready to race! 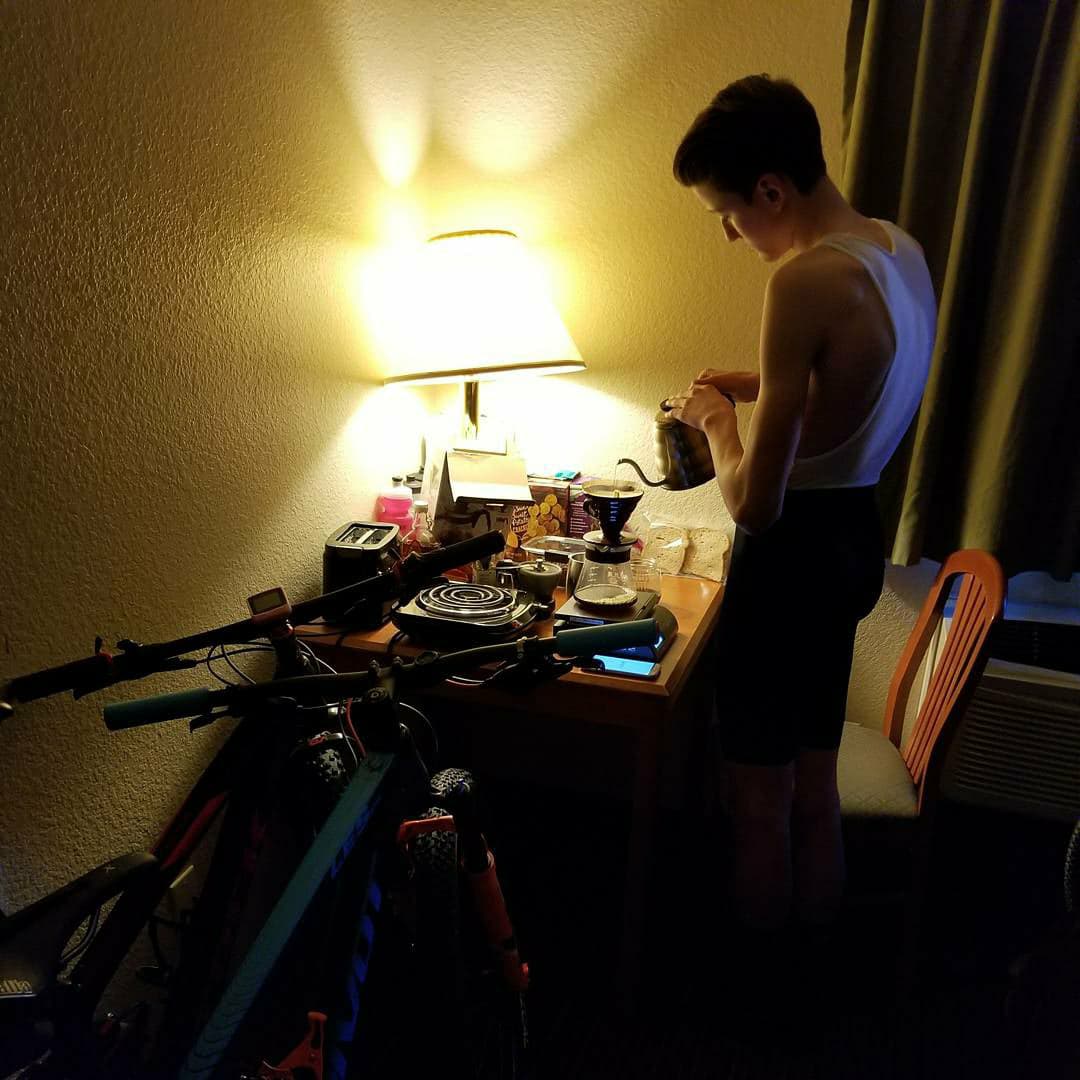 To reduce my anxiety on race day, I pre-made my before- and after-race meals since our hotel wouldn’t have a kitchen. I also brought my portable coffee station, which consists of special pour-over equipment and Alpha Coffee for a pre-race energy boost. 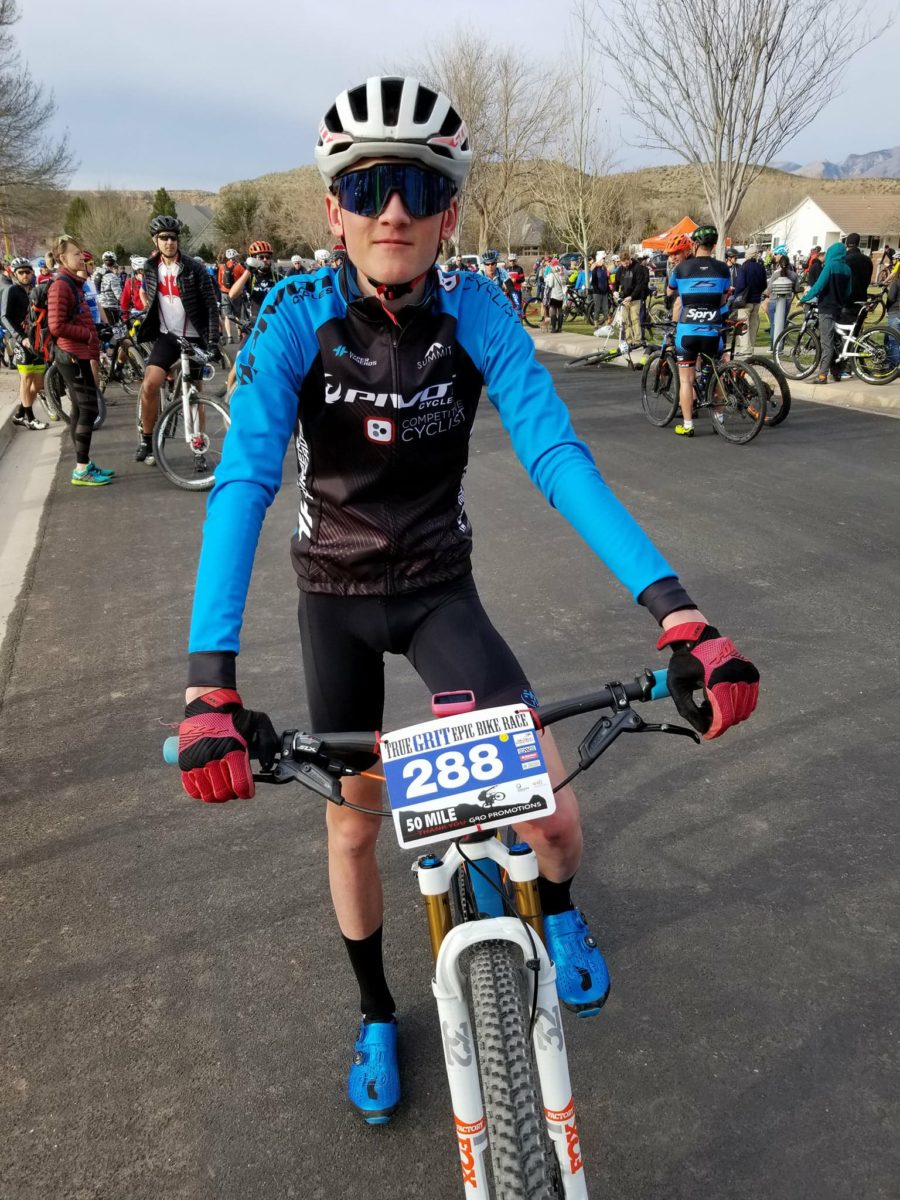 When I roll up to a race I normally get some pre-race nervousness, but when it is a long race, I am less stressed compared to an XC race. Because in a long race, I know I have 50 miles of riding to make up for a potentially mediocre start and to get where I need to be.

Going off the line I felt good, and made up some positions heading on the dirt roads to the first bit of singletrack. I made sure that I paced myself correctly, and was eating and drinking around every 20-30 minutes so I didn’t bonk later in the race. Everything went well and I was in the top fifteen for the first half of the race.

But with such a technical race and over so many miles, there is a good chance something will go wrong. I shifted into my ideal gear for a super fast trail called Bear Claw Poppy, when I realized there was something wrong with my shifting. When I got into a more difficult gear, my chain would jump around and get caught. I didn’t want to risk a chain problem, so I shifted into an easier gear and hummingbird-pedaled my way down Bear Claw. 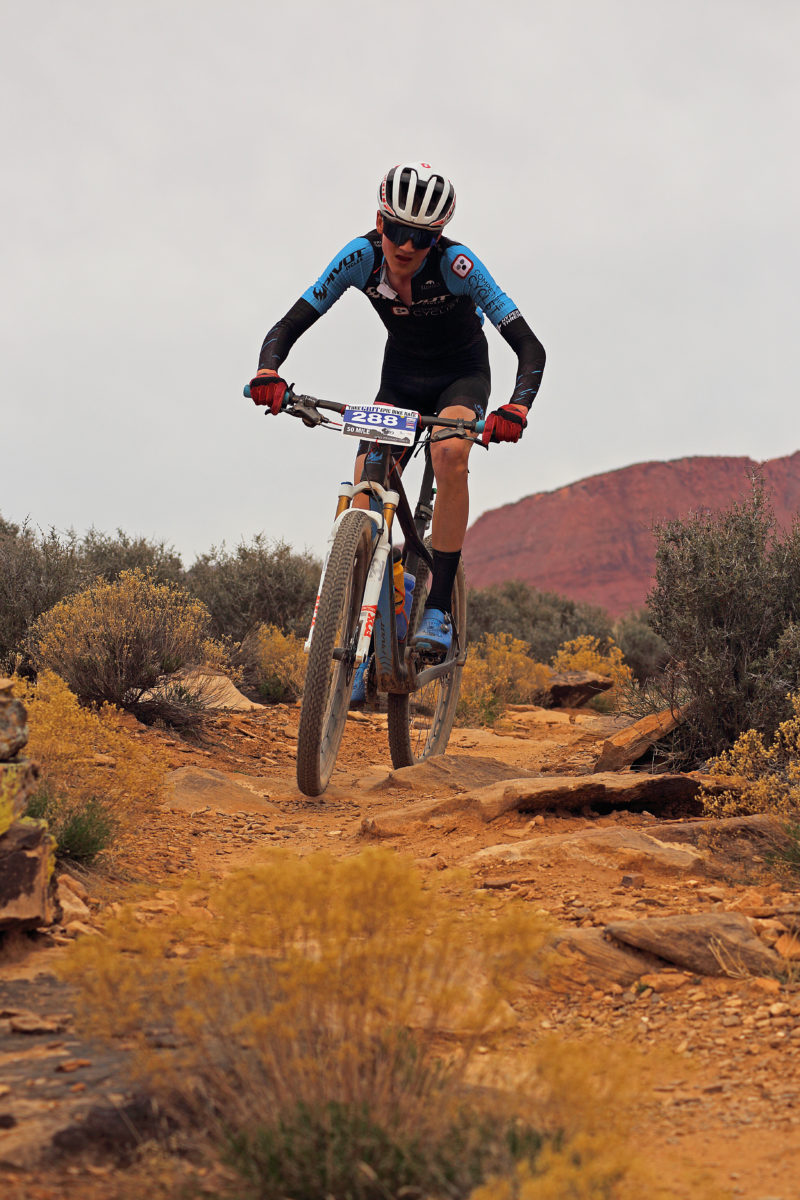 Luckily the shifting problem didn’t affect the climbing sections of the course.  By the time I got to the last feed station and only had about ten miles to go, I was very tired. I had chosen to ride a hardtail in this race and I was beginning to pay for it. The technical downhills had caused my hands, arms, and legs to begin cramping.

I fought my way up the final tough climbs and could see someone behind me. At this point, I could tell they were moving faster than me. I was worried the rider might catch me on the last descent. Unfortunately, I just didn’t have the energy to hold them off, and was passed in the final stretch before the finish line. I decided to cut my losses and let them go.

Once I got onto the paved road heading toward the finish line, I got into full time-trial position and attempted to shave off as much time as I could. When I began to push hard my legs locked up, which meant I was just going have to spin easy to the finish. Crossing the finish line I was filled with relief that I didn’t have any major mechanicals and I had a very good result of 12th place, shaving about 17 minutes off my previous year’s time.

It was very motivating for me when I found out how much faster I went than last year, and I was finishing near some of the pro riders that I look up to. Overall I learned a ton about my limits because of this race and where my fitness stands. It was very challenging, but that is the reason I will keep coming back to the True Grit Epic.

If you are up for a challenge and want to test your limits, you definitely need to do the True Grit Epic!

Trails
Outride Brings 5 New Cycling Programs to Indigenous Communities in...
Community
Limited 2016 Red Bull Rampage Tickets on Sale Tomorrow
Trails
"I Wish They Had That When I Was in High...
Community
Middle and High School Mountain Bike Racing Season is Back!

Gear
An Inverted Dropper from Enve, Revel DJ Bike, and Improved...
Gear
Enduro Deals & Early July 4th Sales
Progression
Mountain Biking with Asthma: How One Elite Athlete Controls it
Gear
The We Are One Arrival Is a Mid-Travel Bike With...
Subscribe
Login
Please login to comment
1 Comment
Most Voted
Newest Oldest
Inline Feedbacks
View all comments

Thanks for sharing your story Brennon. Great write up. Congrats. And way to take on the big boys. Yours is a true “Iron Will” story. Check out that movie if you haven’t already.