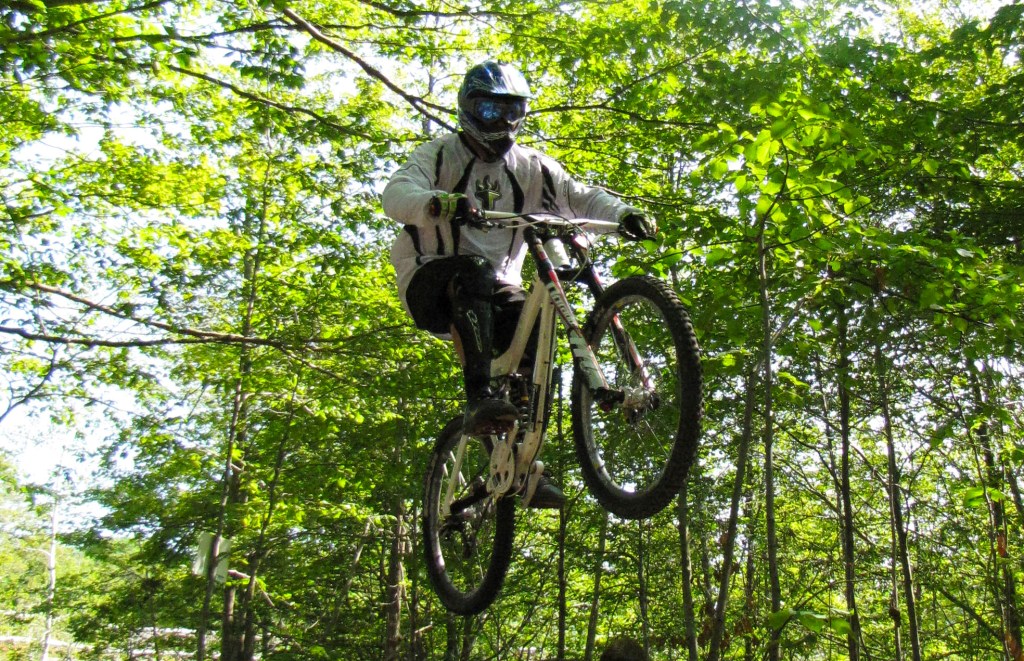 This year I’ve been sporting THE Industries’ Storm protective gear on the trail and I’m happy to say I’ve avoided injury so far. In fact my wife is probably the most appreciative – she gets pissed every time I come home with a broken bone. I was lucky enough to get the upper suit guard and lower two-piece F-1 guards hot off the production line which has given me plenty of time to put this gear through its paces.

Earlier this year I had a nasty crash after casing a large step down (about 10 ft) and I did a perfect 720 degree rotation according to my buddy. I got up from the crash without a scratch anywhere that was covered with protection. Other than nailing some soft tissue on the seat of the bike, everything was OK and I was up and going the next few days. Some spectators thought for sure I had broken a bone or two but sure enough, the Storm gear did its job perfectly. 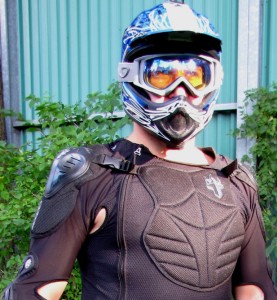 So let’s talk details. Starting off with the Upper Suit Guard, you get a form fitting mesh fabric as a base with one zipper which allows you to get in and out without much difficulty. There are basically four main elements to the protection on the upper armor: front chest pad, armored back, shoulder cups, and two-piece elbow/forearm protectors.

The front chest pad attaches directly to aeroprene and is not removable. It’s flexible enough that it doesn’t distract you when you ride unlike other systems that can feel like you have a plastic plate hanging off your jersey. The pad is split enough to allow it to move with you and conforms to your body as you bend and move.

The armored back panel reminds me of an armadillo’s shell. Like many others on the market, the back protection is articulated to allow for body movement. This section is a generous 9-inches wide, traveling from the base of the neck to the small of the back, all over a backing of vented aeroprene. To hold everything in place the guard is zipped up top to the fabric and velcro-ed to the waist belt at the bottom. 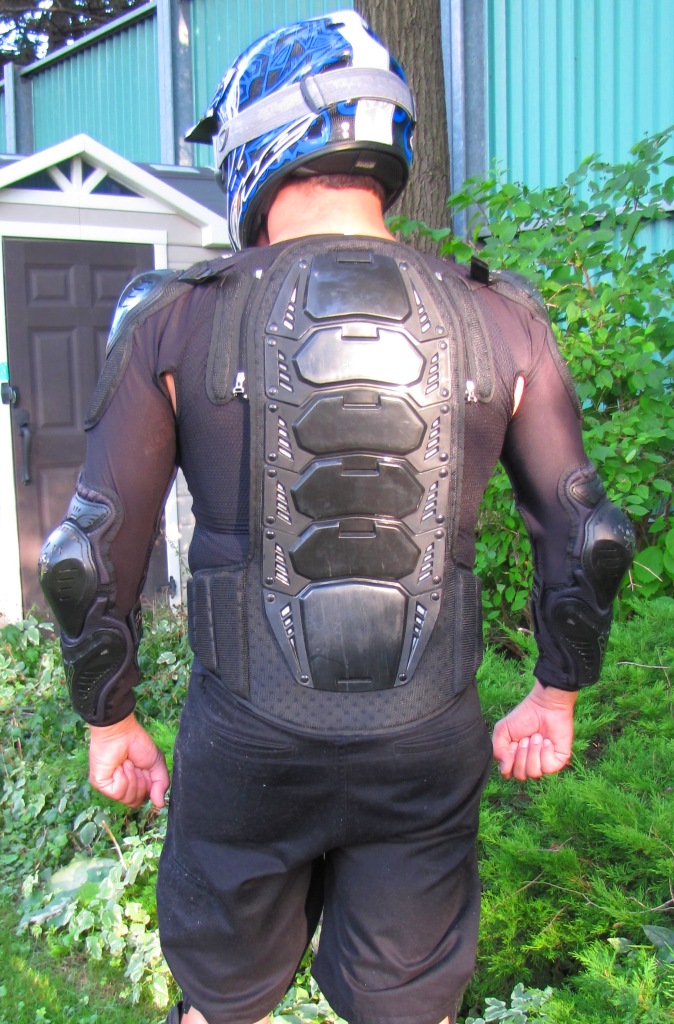 The shoulder cups and two-piece elbow and forearm protectors are permanently attached to the shirt. Underneath each of these hard points you have also have aeroprene to take the edge off impacts while giving the suit an overall comfortable fit.

This year THE added two piece knee and shin guards to the Storm line-up. I actually got a chance to play with both the pre-production and final versions so it was neat to track the changes that were made to improve the comfort and utility. For example, the pre-production units straps that were a bit too short (read: tight), especially for riders on the north side of say 160 lbs. The final version also addressed a small issue with the buckle that was causing a slight bunching at the strap.

There are two major points on each knee/shin guard plus one smaller one, all of which are fixed to padding that’s both comfortable and breathable. The hard points are riddled with micro-vent holes to allow airflow which results in a cooler feeling pad. 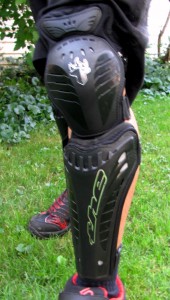 Using and abusing the Storm Protective Gear on the slopes and trails all around Ontario I can say these units got a good season of usage. The funny thing about reviewing items like armor is that if you’re lucky you can go an entire season without actually experiencing an accident which can make it tough to put things to the test. And no, I haven’t considered purposely crashing as part of my testing process. 🙂

Fortunately I did have a few organic over-the-bar excursions plus plenty of arm and shoulder checks against trees and brush. I also experienced the occasional run-in with rocks and some bar wrenching tree hits – you know, the usual stuff. From all that I can happily say this year I didn’t break a bone and where the armor covered me I didn’t get a single bruise or scrape. Now spots where the armor left off (like my thighs and butt) did sustain some damage but that’s another story.

THE claims the Storm Protective Gear is cool running and for the most part it is, though there were definitely times when I broke a sweat in my full get-up. On the longer runs I was generally able to cool down to a more comfortable level – remember, it’s all about air flow. For more mellow runs I typically go with just the shin and elbow guards for maximum comfort. Surprisingly my legs always felt fresh without a hint of being hot with the guards on. I did notice when using the knee and shin guards together the second strap from the top bunched up a bit and felt uncomfortable at times. To remedy that I simply didn’t use it which didn’t affect the performance of the guard.

The Storm Protective Gear – both the upper and lower gear, as well as the elbow guards – are well thought out and are definitely worth the coin. At $149.99 MSRP for the F-1 Upper Suit and $79.99 MSRP for the F-1 Storm two-peice knee and shin guard, you get good protection at a reasonable price. And if you don’t see yourself sailing between the trees and rocks at high speeds, you can cover just your arms with forearm and elbow guards for $59.99.

I love the protection and performance I got this summer from THE’s Storm Protective Gear and I’m looking forward to what’s next from THE in the coming years! For solid body armor on the trail it’s hard to find a better value than THE Storm.

Thanks to the folks at THE for providing the Storm Protective gear and guards for review. For more information check out THE’s website.