Most of Friday, January 28, was spent indoors, but was worth every minute of captivity. We attended the Crested Butte Regional Fat Bike Summit, which is far too massive a topic to cover here and now–stay tuned for a separate article. By 3pm, attendees were released to take part in demo rides and observe grooming techniques at North Village. Scott and I were willing to wait in line to take a couple Borealis carbon fatties out for a spin. Meanwhile, we checked out Kent Adam’s Wildcat groomer and Rokon setup.

This is what he uses to groom the jaw-dropping fifty miles of CAMBA singletrack in northern Wisconsin. Kudos to Kent for helping groom the North Village course for Thursday’s race.

Eventually, there were a couple Borealis rigs available (a Crestone and an Echo), so off we went.

Friday’s snow was even softer mashed potatoes than end-of-day Thursday, so Scott definitely appreciated the width and traction of the 4.8″ Bud & Lou tires.

There were many people, new to fat biking, who finished a demo loop with the (should be patented) “big fat grin” plastered across their faces. Anyone who wanted to head back to the Ski Area Base could stop in at the Avalanche Bar & Grill for free 90 Shilling Ale, provided by Odell Brewing. As we headed back to town, it was obvious that more racers were beginning to arrive for Saturday’s big event.

We woke up Saturday morning to find a couple inches of new snow… and it was still falling. It didn’t bode well for the nearly 300 fat bikers who would be starting their race at 11am. 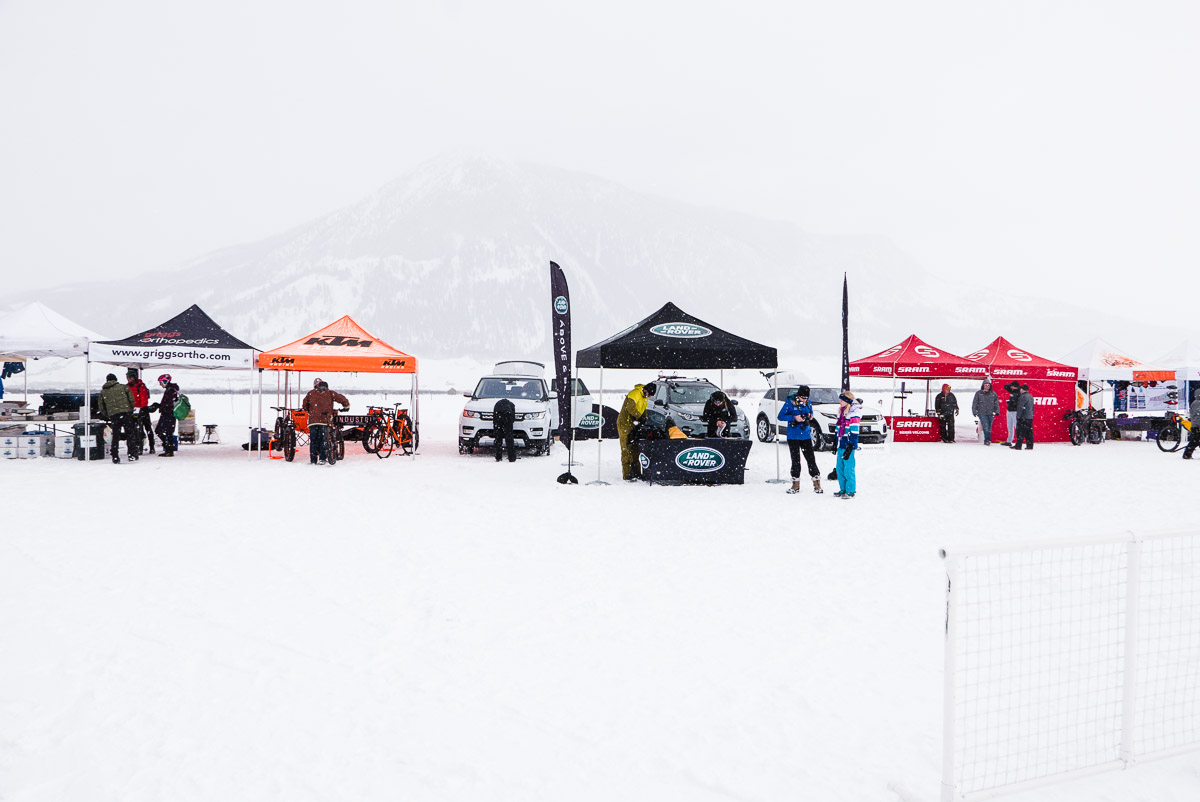 The venue start and finish couldn’t have been more convenient–it was located at Town Ranch, at the end of 9th St., right behind the Crested Butte Community School. Thanks to the collaborative efforts of Dave Ochs, Crested Butte/Mt. Crested Butte Chamber of Commerce Director, and Keith Bauer of CB Nordic, a six-mile course of groomed nordic trails was created. This was a one-off course for fat biking as most of this terrain is typically restricted to fee-based skiing and snowshoeing.

For World’s coverage, we chose to ride out a bit onto the course, then follow the pack to various locations. This course was worthy of World’s-level competition, as it threw a bit of everything at the racers. Though it was groomed skate ski wide, the sides were soft and fatty-trapping deep.

Over the course of 5.5 miles, each lap gained 550 feet of elevation, so Elite competitors faced around 30 miles and 3,000 feet of climbing before crossing the finish line five laps later.

The Open class raced three laps, for a total of 18 miles and 1,800 feet of climbing. Anyone who raced on Saturday earned the swag, as conditions were a fine mix of hard-and-fast and soft-and-shifty. Of course, the softest snow was on the uphills, forcing some hike-a-bike even by the elite racers… and the steepest descents, forcing some slow-mo topples.

In off road racing, sometimes one’s line is dictated by the biker ahead–and this race was no exception. There were numerous times when an unskilled, timid rider affected an elite racer’s line, even causing a fall or stop. Notable was the nearly universal classy response: a shrug, a smile, a positive comment. Though there were very serious competitors, the prevailing vibe was relaxed fun. Riders were smiling, some even after grunting up a tough climb, remarking, “This is too much fun!” As if to support the first-ever World Championships, the snow stopped an hour before the start. The skies allowed periodic glimpses of sun, and the clouds rewarded photographers with plenty of drama.

The snow did not resume until the last rider crossed the finish line, when it began the accumulations that would bury Crested Butte by Sunday morning.

Snow and gray sky could not dampen the party atmosphere as Lez Zeppelin took the massive stage.

Odell beer was flowing as the crowds grew.

Anyone even remotely familiar with the original Led Zeppelin was rocking out to the skilled all-woman cover band. The mellow crowd wasn’t even impatient when the awards were delayed by 15 minutes. Ochs pumped up the crowd by wildly flinging massive amounts of sponsor-provided goodies from the stage.

The top riders took the podium and were rewarded with some pretty nice gear.

First place racers walked away wearing nice parkas. Though there were lots of reference to champions also wearing a literal “brand,” only one took advantage of that particular lifetime prize. I did have my bun branded, but then I ate it along with the hamburger.

Despite living for the past two years just across Monarch Pass in Buena Vista, this was our first time visiting Crested Butte. We will most definitely hit up the famous mountain bike trails that CBMBA has been developing for decades when the snow melts this summer. We will also be back to enjoy the great downtown establishments.

Our recommendation for a fantastic beer selection is Brick Oven Pizzeria. My biggest dilemma was choosing, so the first visit I just went with the rotating Imperial IPA, which was Odell’s Myrcenary. Scott chose the Belgian Tripel Karmeliet on tap, and we were both happy. The second visit, we were ecstatic with the Copper Kettle “Well Bred” Barleywine on cask, and the Odell’s Russian Pirate, a rum barrel-aged Imperial Stout. The pizza was excellent, but the beer selection is the real draw.

For an eclectic selection of amazingly flavorful food and over 100 tequilas, Bonez is the place to be. We had Chili Rellano and Lobster Taco entrees with Silver Queen margaritas and a Kah vertical tequila flight for dessert. The second visit–yes, second visit–was for appetizers (Ahi Mini Tacos and Short Rib Empanadas) and a Bonez margarita. We couldn’t resist sharing a Cheesecake Chimichanga to go with the horizontal Anejo tequila flight.

We stayed at the historic Elk Mountain Lodge right in town. We were able to walk the few blocks to dinner and back, which made the tequila flights and great beer possible! Besides the quiet, comfortable room, the breakfasts made us look forward to waking up in the morning. Homemade granola and fresh fruit are a staple in addition to a homemade hot option. There was a different choice every morning, including blueberry pancakes, baked french toast with peaches and bacon, scrambled eggs, sausage, and our favorite: huevos rancheros.

We needed to leave before the Sunday “Hair of the Dawg” downhill event, but no worries–I have no doubt there will be a Second Annual Fat Bike World Championship.

Nancy Anderson
I've been a cyclist my entire life, but started mt biking in 1992 when I bought a used Schwinn KOM from a friend. I started riding the ski trails, 2-track & fire roads of Northern Wisconsin on my mtb & the mt tandem that my husband, Scott & I bought. Once CAMBA started building singletrack, we were in heaven. We developed new riding skills alongside the development of a great trail system. My students & I built a 5K singletrack trail in the school forest & my husband & I became active trail volunteers. We started mt biking in Colorado 10 years ago & are still learning new skills.