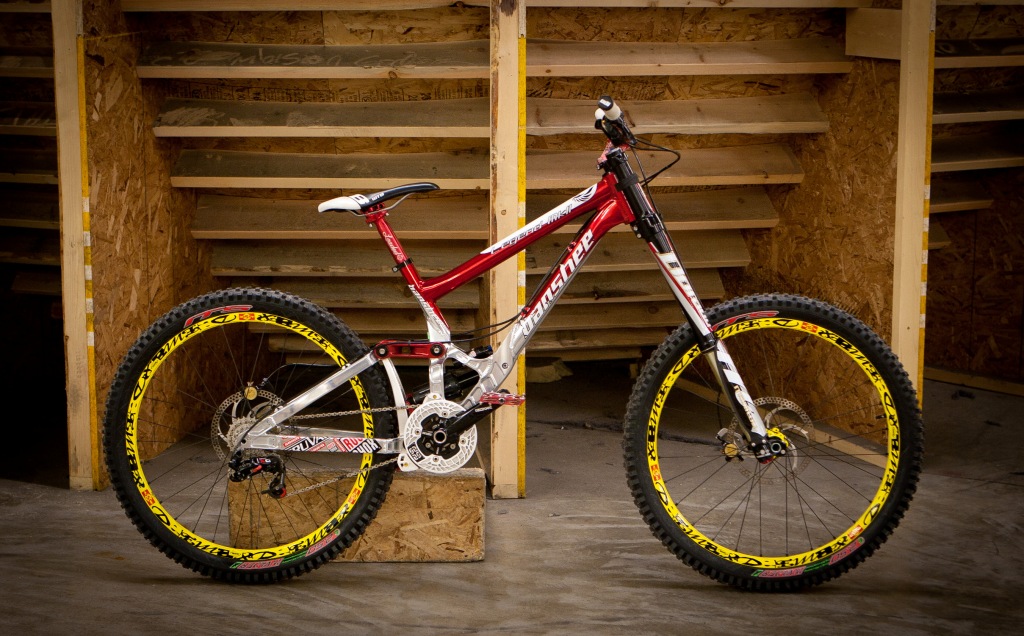 This is pretty much it. My little red rocket. The Dream Machine. The Monster. Here is the Banshee Legend II that I finally have all built up and ready to rip. It took me a while to get it (nearly) complete – I’m actually still waiting on two items that should be arriving shortly. But other than that, it’s done. I can’t wait until the slopes open for the season.

I first managed to get the bike together and out on the trail late in the season last year where I tested out some great products from Rockshox, Avid, and SRAM. Since then I added the final touches of bling from Loaded as well as Deemax Ultimate wheels from Mavic. Those early test rides on the Easton wheelset and Answer products really whetted my appetite for the main course.

The frame is a Banshee Legend II in medium:

If you don’t understand those angles and measurements, let me break it down for you: this frame is a purpose-built DH racer, designed for speed and fast cornering. The ultra-low BB keeps the center of gravity down low while the long wheelbase is great for stability.

The suspension arrangement is what Banshee calls their VF4B (Virtual Floating Four Bar) suspension. Now you might say it looks like someone else’s design but let’s face it: unless you have a single pivot, multi-link, suspension configs almost all look alike. However, there are actually small differences in pivot placement that make a big difference in performance. The virtual center region where the Legend II pivots is also different from other bikes. The short lower link, positioning of the links, and lengths of the links make for an ideal axle path. This path starts arcing up and to the rear (perfect for absorbing square edged bumps) in the first bit of travel; from the middle to the end of its path, the axle goes up and forward (reduces chain growth and pedal feedback). 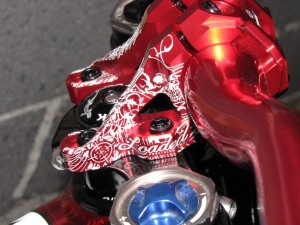 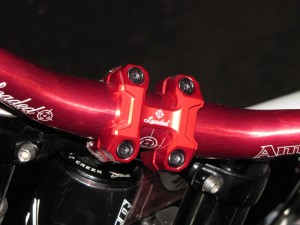 Up front I’m running the Manitou Dorado Pro. I did have the BoXXer WC on there, but for now I’m running the Dorado Pro. I just received the Loaded AmX Rizer bar, a beast of a bar at 31″ wide and 328 grams. The AmX Rizer features 8 back sweep and 4 up sweep which is just right for me. Connecting the bar to the Dorado I have the Loaded AmX direct mount stem set at 45mm length (adjustable to 50mm as well).

Completing the controls, I’m rocking Formula’s ONE brakes (I also run the 2011 Avid Codes) and I love the levers because they take up virtually zero room on my bars and have a great feel (never mind the power and excellent modulation). The shifter is a SRAM 10spd X0 (presently my favorite) with 1×10 gearing. 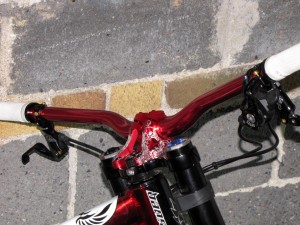 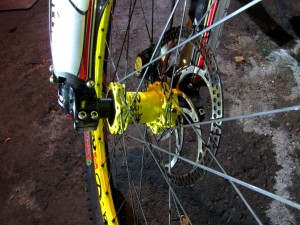 Now let’s talk about the high performance drivetrain. The Descendant cranks are from Truvativ and I’ve added the e*thirteen SRS+ chain retention device to keep the SRAM PC 1091 chain in line. For now the pedals are Xpedo XMX12ACs which have a great feel and provide a wide foot plate. I’m also looking forward to trying Spank’s new Spike pedals soon. Although I don’t plan on doing much sitting on this bike, the saddle is a WTB Valcon mounted on a Loaded X-Lite seatpost. 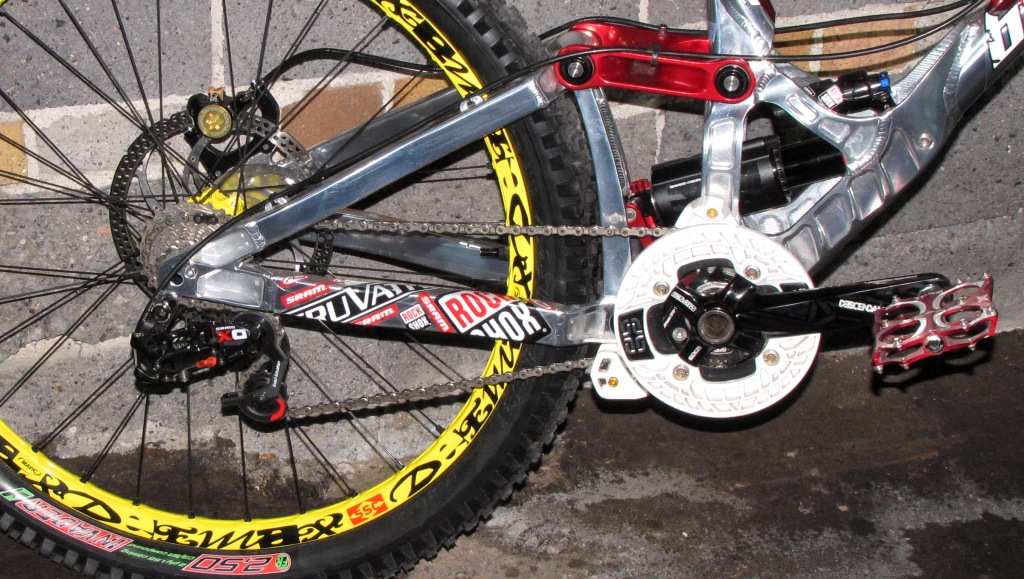 On the back I have the SRAM X0 short cage 10spd derailleur on an OG1090 11-25 rear cassette. Talk about great shifting. Despite the fact that the rear cassette is the road version, it works great with the X0 rear derailleur. Wheels are the iconic Mavic Deemax Ultimates (12x150mm rear) which are super light for DH (under 2,000 grams) and oh so smooth.

Now all this is tied together by two other important things: the rear shock and tires. I’m running the Rockshox Vivid Air which provides an excellent feel while controlling the wheel nicely. For tires I went with the ITS Invader 2.5″. At about 1100 grams each, they offer a decent mix between weight and durability. The Invader is also what is considered an all conditions tire, perfect for the Ontario landscape where I do most my riding. Lately I’ve noticed North Shore type features popping up around here so I’m excited to see how these tires perform in a variety of conditions. 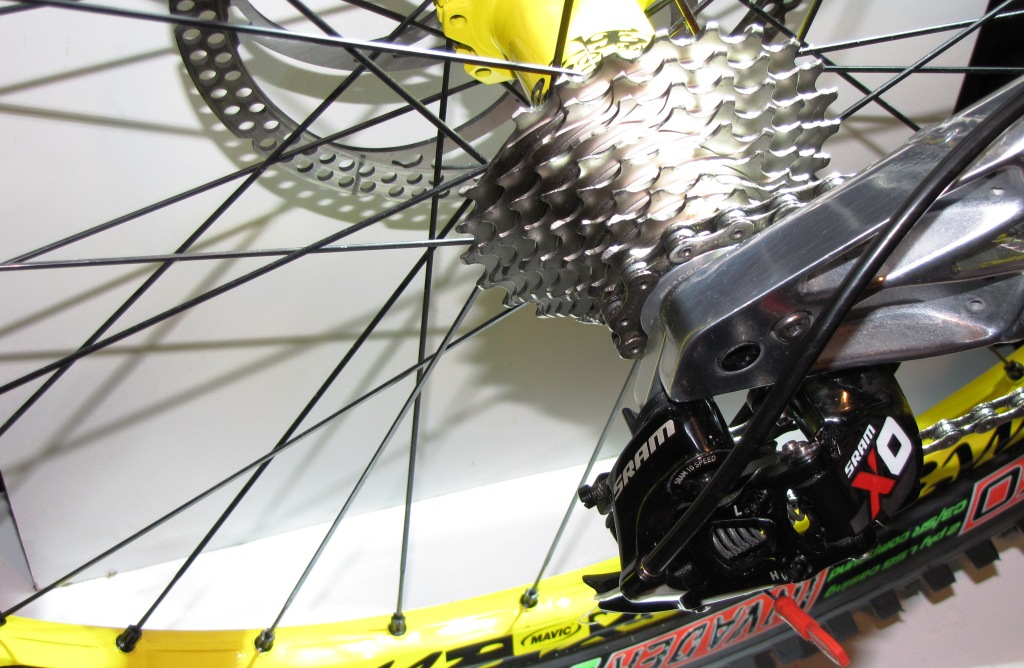 In its current state the bike weighs in under 40lbs. – 37 lbs. to be exact – and it’s still bulletproof. Weight savings come from several areas, starting with the innovative Interspoke milling on the Mavic rims. Banshee carefully selects tubing thicknesses and machined shapes while including titanium pivot hardware. The Vivid Air and the Sram OG-1090 rear cassette shed massive amounts of weight over competing products, accounting for a whole pound of savings together. The final little bits of weight fell off by replacing stock hardware bolts with titanium and alloy parts. 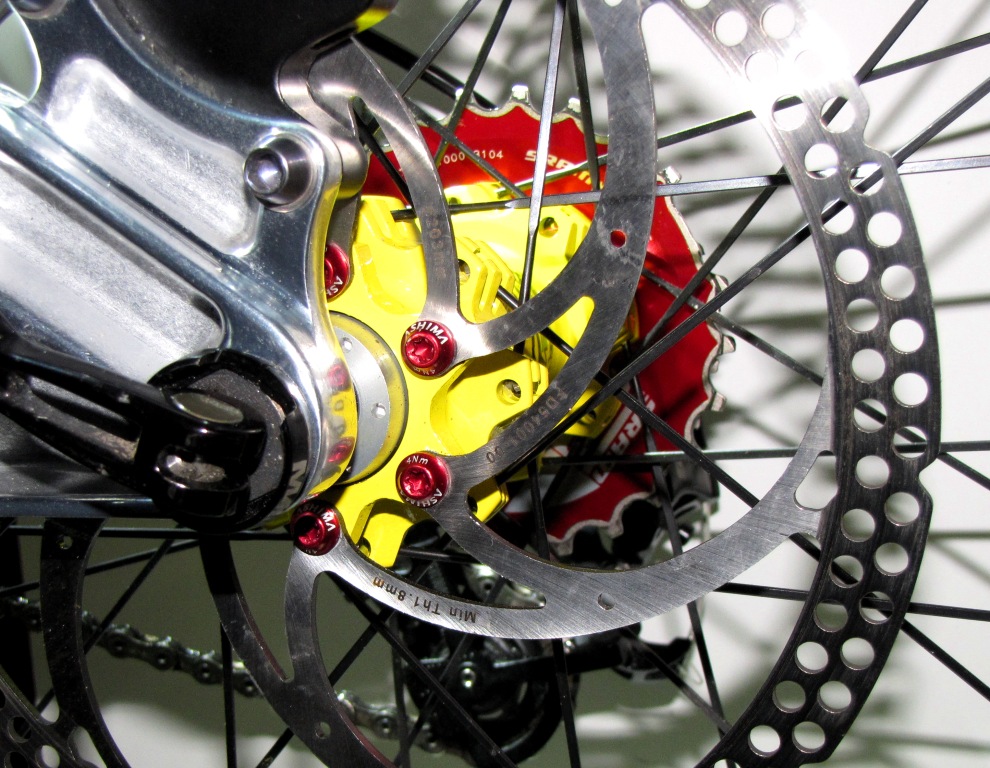 In case you’re interested here are the build details:

Based on a few early test rides I’ve found this bike loves all the lightweight components; in particular the lighter Deemax wheels actually showed increased precision and tracking. I love pitching the bike in corners and the feeling of control I get with the bike in the air. In the hands of a pro rider I can imagine some spectacular whips coming outta this bike!

One interesting thing I noticed so far is that for my body type (5’9″, 190lbs with 31″ inseam and regular arm length), a 50mm or 45mm stem works well with a riser bar; otherwise, running a 55mm stem with a flatter bar works equally well. A 30-31 inch bar seems to offer a good mix between control while limiting over-steering.

Speaking of control, I found with a properly tuned suspension I didn’t get a lot of the diving I normally expect from a long-legged trail machine. Keeping my weight centered or further back and nailing the brakes coming into sharp corners, the bike remains civil without that pitch feeling I’ve had on other machines. The front and rear suspension work well together to keep this ride stable (time spent setting up the shocks is key!). And when things do get rough, I absolutely understand why so much time was involved in the development of this bike. The Legend II feels pretty forgiving – hitting rocks didn’t seem to be much of an issue. The bike tracked nicely over that kind of stuff.

Once I get more seat time in and experiment a little with settings and parts, I’ll post further updates. Stayed tuned for more!

Gear
Why Kids Bikes May Need to Take a Hint From...
Progression
Feeling a Little Sluggish on the Trail This Spring
Trails
Reverberations from the Bike Boom Continue to Rock Trail Traffic
Community
Klunking for Kyle: Commemorating a Life with Mountain Biking's Original...
Subscribe
Login
Please login to comment
7 Comments
Most Voted
Newest Oldest
Inline Feedbacks
View all comments

Bike build is awesome. It all looks like it has been done correctly with a lot of fore thought. Speed tip: Drink more beer and get your weight up because Fat is Fast downhill. Before my currant handle I was know as Down Hill Bill. That was before the downhill courses you run today. Back in the day all my riding buddies were “Roady” skinny and my sponsor was Momentum. Later,

That is one gorgeous ride! Wow. Have fun putting it through the grinder man!

That IS one badd ass bike element,reminds me of a katana sword that has been folded thousands of times so as to make it perfect…..:)

That is just plain sick Element! Damn, I luv that color scheme, it is HOT! I was going to pull the trigger on those Mavics, but ended up just getting the Mavic Detracks instead, being they are just for my new HT that I build up for my FR.

Yeah, I was looking at those Deemax Ultimate’s for my big sled (12×150) and the Deemax for this build, but I got a great deal on that set of ’10 Mavic Deetrak’s. They are black, but with the same design as your Ultimate’s but for a 9×135. If they would make those Ultimate’s in red, I would be hooked for my big sled. That would be too sick.