Since 1975, Marin and Bay Area residents have been preparing for the Thanksgiving Day feast by participating in the Appetite Seminar—a 20-mile mountain bike ride with 4,000 feet of climbing up and over the Pine Mountain Loop. While this year’s version was accompanied by crisp, clear, and cold (38 degrees to start—and yes I know that sounds tropical to some of our more eastern friends, but hey, this is California…), the weather’s always a crapshoot.

Dank fog and/or rain have certainly graced the event in the past, and the peanut butter mud that ensues is legendary. “Old school” 26-inch wheels are magically transformed into 27.5’s, the wheel-size du jour, and 27.5’s grow until they have regressed to the no-longer-fashionable 29 inches. Wheel size aside, the added weight is a real insult while trying to climb a stupid steep fire road, even if aided by literally hundreds of your best friends. 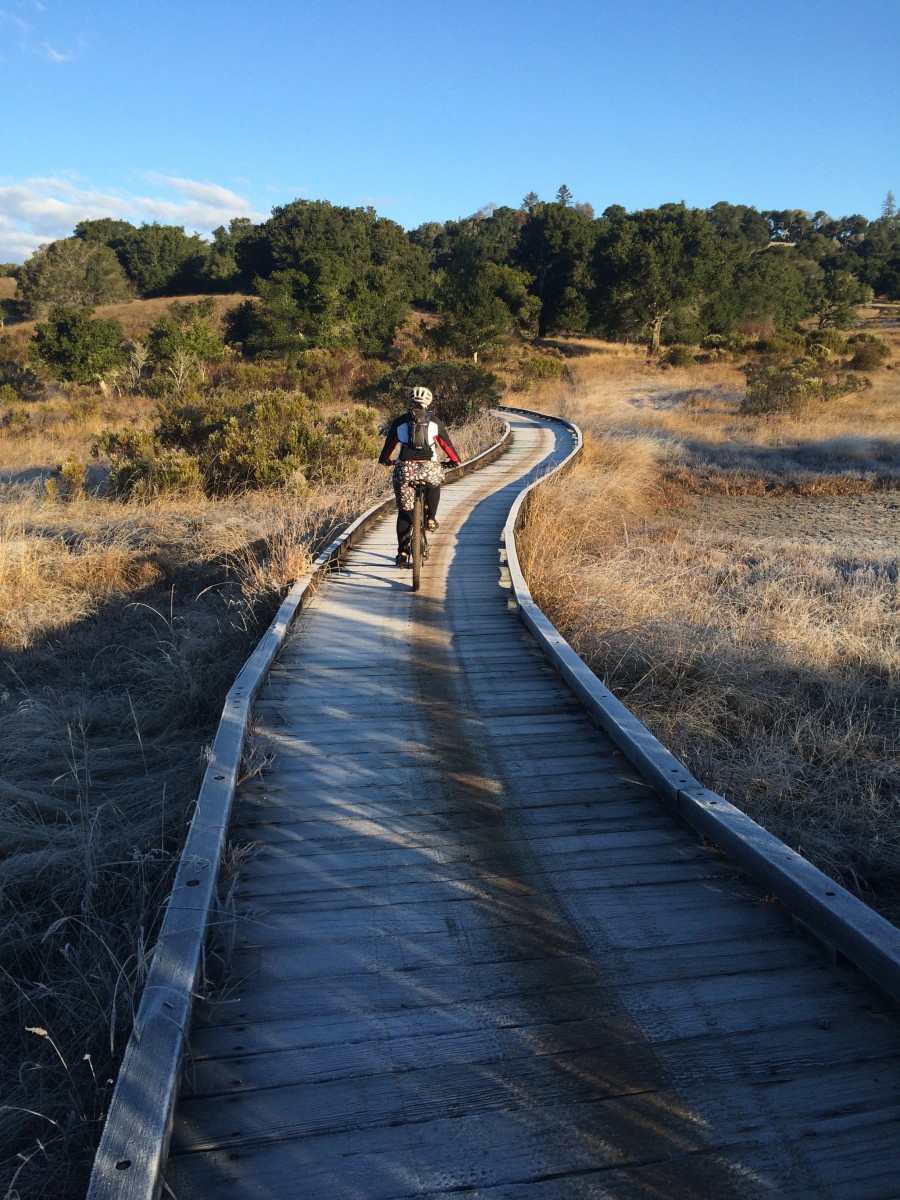 Groups start at all different times, beginning around 7am, peaking around 8, and tapering by 9:30. Rangers and Search and Rescue always have a strong showing, and they are often strategically located at the top or bottom of the most famous outlaw trails. This elicits some side-of-mouth commentary from the locals, but for the most part, everyone’s cool with riding fire road on this day. Besides, poaching trail on Thanksgiving Day in this part of Marin would be like getting a heat on and seeking out a sobriety checkpoint. It’s just not done.

Arguably the longest-running mountain bike event in the country, the Appetite Seminar was started by a pioneer of the sport, Charlie Kelly. The first few events were attended by a handful of friends (Gary Fisher, Joe Breeze), but by 1981, the erstwhile leader no longer knew who these masses were. When Fairfax police inquired after a ride leader, everyone looked at each other, shrugged and went on their way. And to this day the Appetite Seminar—which this year boasted over 1,000 riders—remains leaderless. No permit is requested, issued, or required.

However, the Repack segment of the course has been closed the past couple of years due to fish habitat concerns. Thousands of wheels splashing through a stream crossing makes already beleaguered fish even sadder. That’s okay–Repack, though legendary, is just a steep-ass fire road without much more than nostalgia to recommend it.

I caught a glimpse of Mr. Kelly at the bottom of Scorcher, a bitch-slap climb out of the bottomlands that I tend to forget about no matter how many times I’ve ridden this route. Like bad accidents and childbirth, the mind intervenes and strategically erases the nasty bits to ensure you’ll do it again. While the advantages of this phenomenon are clear in regards to childbirth—the continuation of the species and all—they are less so for grinding, heart-exploding ascents.

At the top of Scorcher, Jim Jacobson of local trail building fame was fulfilling his customary role of handing out Clif bars and Gu. This was a logical rest/socializing spot, and though the climbing wasn’t done (the climbing is never done on this ride—it is uphill both ways, in the rain, etc., etc….), the main ass-kicker was a thing of the past, and this was reason enough for rejoicing. Another two miles ahead was another filling station, with fixtures from Fairfax Cyclery brewing hot French press coffee with whipped cream on top (and whiskey on the side), with hot toddies also an option. Rangers on their ATVs chatted with riders, each other, next to this pop-up wilderness bar, and gratefully accepted the steaming brew (sans hooch, of course…).

Marin’s trails and woods are plump with turkeys. A rather astoundingly simple animal, I have had call-and-response repartees lasting several minutes, leading me to believe that I am something of a turkey whisperer. Riding past the Meadow Club golf course, a flock bumbled and bobbed near the 9th hole. I called out several times and got nothing. No response. My friend Anne, feeling my distress at this snub from my feathered brethren, turned her head as we descended and said, “they are in mournful, silent solidarity for Thanksgiving. To speak to you today would be blasphemous.” This was a sage observation that soothed my hurt feelings. I wondered if they were alerted to the date by the gaggle of riders sporting turkey costumes?

Back at the Marin Museum of Bicycling, beer and smiles flowed freely, and we were quite tickled to arrive before the beer ran out, as this sad fate has been ours in the past. While tasty singletrack is never on the menu for the Thanksgiving Day Ride, it is one of my all-time favorites. The faces of friends you’ve known forever, since yesterday, or haven’t met yet all seem to gleam on this favorite American holiday.

Teens from the local mountain bike teams are out in force, giving me hope for the future of the sport and for the stewardship of our trails and precious open spaces. Unbeknownst to most of them, they are passing the parents of the sport–Charlie Kelly, Jacquie Phelan, Joe Breeze and others–on this crisp, beautiful fall morning.

With the Appetite Seminar of 2015 in the vault, it is now allowed to rain in California. 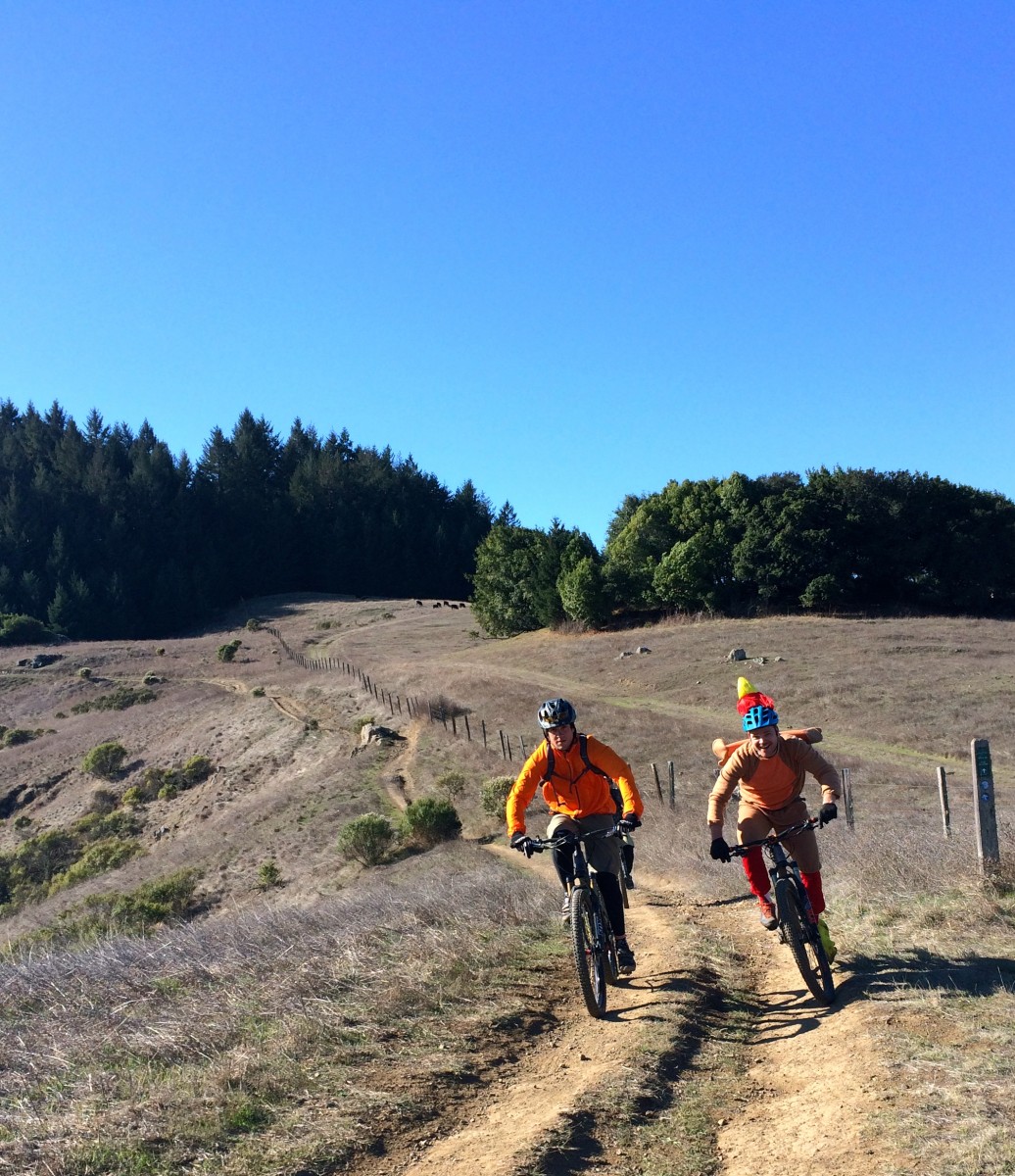