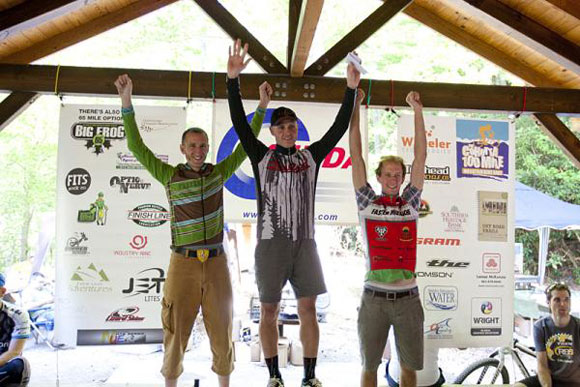 Earlier this year singletracks signed our first race team sponsorship with an Atlanta-area club called Faster Mustache (FM) and the guys have been tearing it up ever since! This past weekend FM rider Eric Nicoletti took third place in the Cohutta 100 singlespeed mountain bike race, a 100-mile mountain bike epic along the TN/GA border with 12,000 feet of climbing. And Nico did it on a singlespeed in under 8 hours. Ridiculous.

The team has also notched impressive finishes this year at the Snake Creek Gap Time Trial (first place singlespeed 34-miler and third place singlespeed 17-miler) and six-hour mountain bike races like the Grind on the Greenway, 6 Hours of Heritage Park, and the Chainbuster at Georgia International Horse Park. Yep, these guys are masters of pushing through the pain and they aren’t afraid of pedaling their mountain bikes – a lot.

In addition to the impressive finishes and upcoming race calendar, the FM club organizes an informal night ride each Tuesday that starts in Candler Park, just east of downtown Atlanta. I’ve been doing the Tuesday night ride pretty regularly for the last year and a half and it’s always a blast. Details on the Faster Mustache calendar. 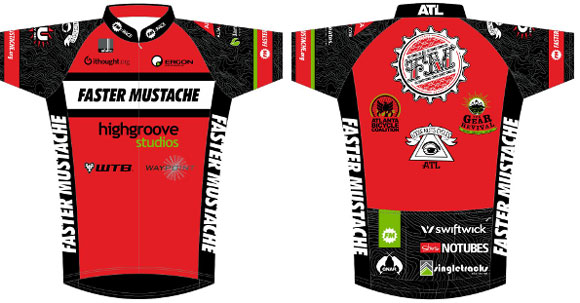 Look closely and you’ll see the singletracks logo at the bottom of the jersey. Good thing these guys are so fast – most people will be staring at their backs! 🙂

We’re stoked to support such a great group of mountain bikers and we’ll try to keep you posted on their race results throughout the year. Keep your eyes out for the sweet 2011 team kit at upcoming mountain bike races and introduce yourself to the guys!

Sweet. “Faster Moustache” is pretty much always next to someone’s name on the podium every race I’ve been to the last few years.