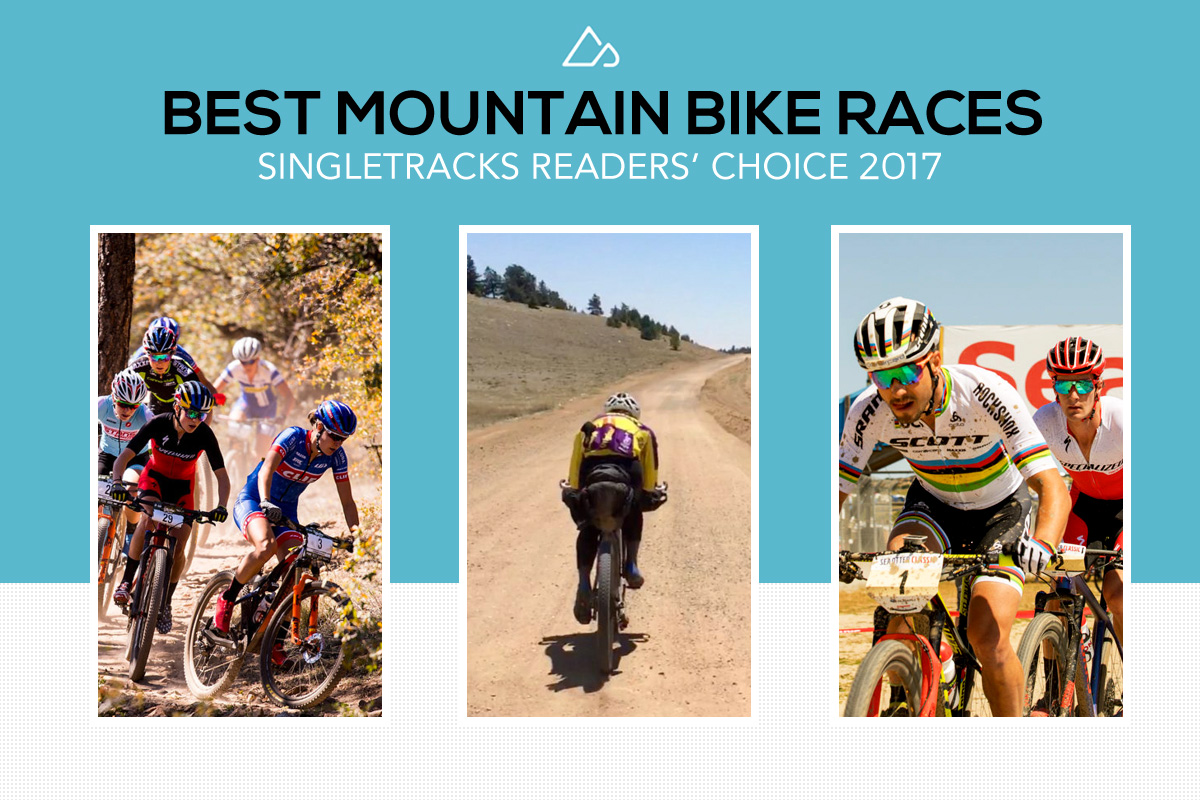 As part of our annual Gear Survey, we asked our readers to tell us about their favorite mountain bike race. The responses ranged from endurance events to enduros, with plenty of “I don’t race” thrown in for good measure. After combing through the results, here are YOUR top seven races.

I must admit that I was surprised to see such an extreme event make the list! The Tour Divide gets its name from the route–racers trace the Western Continental Divide beginning in Banff, Alberta, south all the way to the Mexican border with New Mexico. There’s no entry fee to race, and no prizes for finishing first. This event is all about testing your limits–both physical and mental–and, of course, bragging rights. The Tour Divide is a self-supported race, meaning every rider must be self-sufficient out on the course.

This year’s edition of the race was won by 41-year-old Tour Divide rookie, Brian Lucido. He covered the route in just under 15 days, averaging nearly 183 miles each day. Damn! Be sure to check out Greg’s interview with Eddie O’Dea, who raced this year as well. Greg met him out on the route and asked questions as they rode–no time to stop.

The Whiskey, as with all of Epic Rides’ events, is more than just a race. It’s a whole weekend dedicated to celebrating mountain biking. There’s a fat tire crit, music, whiskey, beers, oh, and a mountain bike race. With three distance options to choose from, there’s a challenge for any skill level. Opt for the 50 mile route and you’ll have a stout 8,400 feet of climbing. Expect stacked fields, particularly in the pro category thanks to the large cash payouts. Just be sure to sign up for this one early as it’s bound to sell out. If you can’t make it to The Whiskey, check out their other events in Grand Junction, Colorado, and Carson City, Nevada.

The Downieville Classic is a whole weekend of dirty fun with shuttle rides, a river jump, BBQs, music, an XC race on Saturday, and the main event, the Downieville Downhill on Sunday. Compete in both races, and you’ll be vying for the title of “All Mountain World Champion”.

The town is nestled deep in the Sierra Buttes in Northern California and the trails are notoriously rocky. Many a racer has had their hopes dashed by slashed tires. The Downhill descends over 5,000 feet in 15 miles, but there’s a fair amount of climbing as well. Racers will gain 1,000+ feet, with 700 feet of that coming in one decisive climb. It’s here that the race can be won or lost.

As a past participant in the BC Bike Race, I can tell you personally what an incredible event it is. Over seven stages racers get a sampling of the finest singletrack in British Columbia, or damn near anywhere, for that matter. The course changes a bit each year, but expect to see trails on Vancouver Island, North Vancouver, the Sunshine Coast, Powell River, Squamish, and a finish in Whistler. All the trails have a slightly different flavor and the local communities get really involved in the race.

One of the most impressive things about the BC Bike Race is the organization. How they move 600 racers, their bikes, and gear all over the province for a week with such precision is mind-boggling. As a racer, all you need to do is show up, ride, and go where you’re told. My advice to anyone considering doing the BC Bike Race is: do it! You won’t regret it. It’s a tough week though, even if you’re just in it for the experience, so be sure to show up in the best shape possible with your technical handling skills honed. While you may be used to riding roots and rocks at home, it seems everything’s a little bigger in BC. The BC Bike Race is known to sell out in a matter of days, so don’t delay signing up.

The Iceman has come a long way since the inaugural race in 1990. That year there were 35 competitors that entered; in 2016, there were nearly 5,400 racers! The race takes place on the first Saturday in November near the northern tip of Michigan’s Lower Peninsula. There’s not much climbing on the 30 mile route–less than 2,000 feet. Most of the route is on dirt roads and doubletrack. Essentially, it looks like a point-to-point drag race with the pros finishing in around two hours.

Part of the draw for the race for both the pros and amateurs is the huge cash purse up for grabs–$63,000 was awarded last year to 250 racers across all categories. While winning some cash would be sweet, I’m guessing the huge attendance has more to do with getting in one last race before the long and grey Midwest winter sets in.

The Leadville Trail 100 is what I like to refer to as a “feather in the cap” race. By that I mean the race is more a test of will than an event meant to showcase amazing singletrack. The course is 100 miles long and is set up as an out and back, so dirt roads factor heavily in the route. Riders start in the town of Leadville, Colorado, which sits at over 10,000 feet in elevation. There’s nearly 12,000 feet of climbing, 3,000 of which you’ll gain in one decisive climb up Columbine to the turnaround point. Riders will top out at 12,400 feet, so oxygen is at a premium.

Just getting into Leadville is a challenge in itself. There’s a lottery for entry, but also a handful of Leadville Qualifier events around the country. Place well enough in one of those and you can secure your spot in the race. Once you have your entry, start hitting the hills over and over and over; lighten your body and bike; and consider some altitude training.

The Sea Otter Classic is the unofficial kickoff to the cycling season in North America held in mid-April at the Laguna Seca Raceway near Monterey, California. Whatever kind of racing you’re into, you’ll find it at Sea Otter. There’s XC, enduro, dual slalom, DH, cyclocross, and road events over the long weekend. In addition, there’s also the Sea Otter trade show happening concurrently. Attendees can see–and often try–the latest and greatest cycling products from just about every manufacturer.

Now, to be honest, the trails around the venue aren’t the most interesting, but the scenery is hard to beat. The real attraction to Sea Otter is the atmosphere as cyclists from around the world come to shake off the winter.