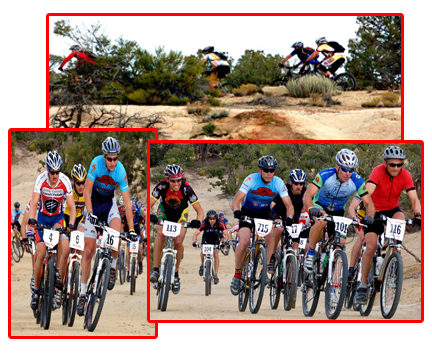 Photos from City of Farmington

The Road Apple Rally in Farmington, New Mexico is the oldest continuous running mountain bike race in the country (and perhaps the world) and this year is the 28th anniversary. In the early days of the race the competition was actually between equestrians and mountain bikers (seriously!) but today you’ll only see mountain bikes on the trail. I wonder how they convinced the horses to ride trails alongside mountain bikes without freaking out?

More than 225 racers are expected this year including an international and star-studded field. Ned Overend will be competing this year in what he calls his “favorite ride.” That’s a pretty solid endorsement coming from the former mountain biking world champ and Durango, CO resident.

From what I’ve read the course is fast and swoopy – a real roller coast ride according to many who have raced the course. The winning time last year was 1 hour 44 minutes and over the 30 mile course that means an average speed of more than 17 mph! I have a hard enough time averaging that kind of speed on the road.

If anyone is able to make it out to the Road Apple Rally this weekend send us the pics so we can post them here!