The video above got me curious about this whole gravel riding phenomenon out here in the middle west. Then I saw this and I was hooked:

A better name for this race: “A Dangerous and Exciting Thing to do on a Sunday.” The second annual Gravel Metric held by the North Central Cyclery of DeKalb, IL was on Memorial Day weekend. I’m new to the midwest, own a badass new cyclocross bike that has helped me stay in trail shape during the off season, and have a healthy disregard for personal safety and severe storm warnings. Additional bonus: I’ve been pumping iron with James Wilson’s Mountain Bike Dumbbell Combos and these days I’m feeling strong like bull. 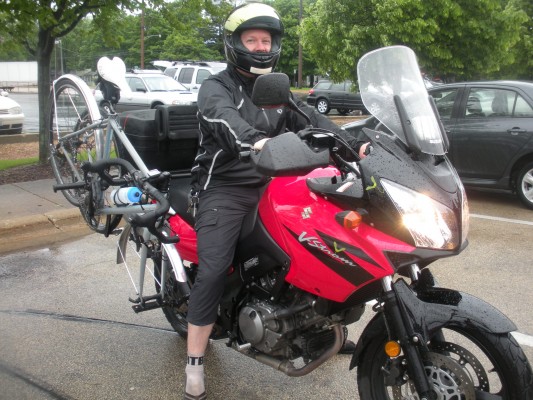 The author post race, but imagine the entrance (in full motorcycle riding gear) and the impression made.

At the start about 120 riders queued up to listen to the final instructions. A casual glance around told me there were some ringers in this crowd. Slick kit, high-end cross bikes built for nothing but speed on the unpaved. The most serious-looking of the contenders brought nothing unnecessary: two bottles, energy food of choice, themselves, and their machines. I felt positively portly carrying a third water bottle, a rain jacket and a steel cross bike with fenders. Ah well, I’m out to do well, ride my own pace and have fun. We’ll see how that goes. 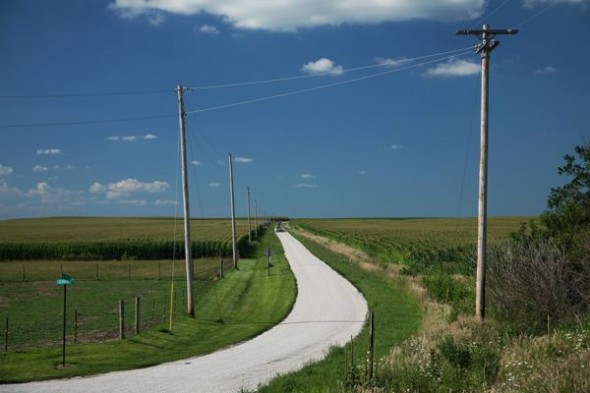 As we rode group-style from downtown DeKalb to the end of pavement it became obvious there were some determined lads and lasses that came to hammer. I tried to maintain a front-of-the-middle position. There was some confusion as to whether we would regroup and have an official start out in the country. Turns out that was not the case, and once the road turned crunchy it was a balls-out sprint start. I turned up the heat and rolled with the second pack for a bit, but soon I realized I was going this one alone.

Falling into your pace is a great feeling; with the knowledge that you’ve got a 100K day ahead of you (about 63 miles in Americanese) you find that balance that’s fast enough to move the miles but tame enough to sustain for the next few hours. I can do this, as long as it doesn’t rain… Oh yeah, then came the rain. There was very little lead up to the heavy stuff, just fat raindrops that came faster and more profuse as we continued the grind. As the real steady rain set in we hit the first dirt section. Check that: it instantly became the mud section. That was about the time my bike ride turned into a hike with a very uncomfortable backpack. We slogged through mud and high weeds pushing, carrying and every once in a while trying to remount and spin. And to think I left my “getting dirty” shoes at home…

As some of my fellow bike masochists know once you’re wet it ain’t that bad. You give in to the fact that you’re out there, it’s 30 miles if you turn back or 30 miles if you soldier on. My phone and wallet are in a bag, I’ve got a Pearl Izumi rain jacket on keeping me warm enough, I took the bike with fenders (such a good call) – let’s knock it out. So that’s how it went for the next hour or two.

Did a little stream crossing, then climbed a long hill that someone referred to as “The Lollipop.” It was the out-and-back section around mile 40 that had the last checkpoint. It was a long, straight climb to the top of a hill in an intense rain and electrical storm. There were cookies at the checkpoint, and as I reached into the basket that one of the kind volunteers offered to me my jacket sleeve let out at least a pint of rainwater onto said cookies. Still, best cookies of my life. Iced oatmeal. Thus refueled I turned back and jammed down the hill as the lightning struck all around us. It was a real hammer of Odin type storm, and I was hooting and hollering with that manic energy that you only get when there’s real danger to your safety, there’s nowhere to hide, and you’ve accepted it and decided to go for it anyway. They decided not to go for it. Probably wise

After all that the ending was anticlimactic. I rode some more, got a glorious tailwind for a few miles and was able to cruise down the farm road at 25mph, and generally tried to keep my momentum. The last stretch of 8 miles was on road and surprisingly that was the toughest part. When we got back to North Central Cyclery the kind and generous proprietors had the doors open, the heaters on and the basement BMX room available as a changing room. Suitably dried and refreshed we decamped to a local bar for beer, raffling of schwag, and stories of increasing exaggeration. I had an amazing time, kept a 16mph average speed for 65 gravelly miles, met some new nutty bikers, and rode my motorcycle – what the hell more is there?

Sounds like pretty extreme conditions. So other than the hill at the turn around point, was the course pretty much flat?

Clearly this is a race that’s mean for CX bikes but did anyone attempt it on a mountain bike? I’m thinking a 29er with semi-slick tires and big gears might work…

Yes, pretty flat with the exception of those deceptive small grade “false flats” and of course riding into the wind which can feel like its own hill.

There was one dude on a Niner Air 9 Carbon KILLING it. Other than being a big sail with the upright position of a mountain bike, they are very appropriate for the terrain.

Sounds like an awesome race, way to be hardcore! That second video was killer…. now I’ve gotta do one of those races!

I can’t see the videos (work filter!), but enjoyed the article. Sounds like it was quite an adventure. You’re bike on bike rig is pretty sweet.

Can you tell us more about how you rigged your bike up to your moto?

Very Carefully.
In essence I took a vinyl-coated steel bar and hose clamped it across the back of the moto saddle to the passenger grab rails. Then I removed the right side passenger peg and bolted in a steel tube with a Bike Tite fork clamp on it.
http://www.amazon.com/Delta-Bike-Hitch-Locking-Mount/dp/B000ACAM7E
Lash the pedal and the seat tube to the steel bar with toe strap and inner tube, clamp the fork, turn the bars and go.

Crackpot Engineering: How to Carry a Bike on a Motorcycle | Mountain Bike Blog || SINGLETRACKS.COM

[…] objective: to fabricate a device that would allow me to carry a bike on my motorcycle (perhaps to a gravel CX race?). Since my wife is a frequent passenger, the device would have to stay out of the way of her […]