Though held in Texas, the kick-off race for the New Mexico Off-Road Series (NMORS) every year is El Paso’s Coyote Classic.  Since El Paso consistently offers summer-time temperatures and weather, even in early Spring, the Coyote Classic is an early start to the racing season and a welcome change of pace for many traveling from regions just starting to thaw out from the winter snow.

The race began with temperatures in the low 70s at the start and climbing to the mid 80s by the end of the race. Race directors this year were feeling a tad bit ornery as they altered the course from years previous and sent everyone through a 100 yard sand pit prior to the first steep climb. The first half of the course for Cat 1/Pro and Cat 2 racers climbed almost 800 feet by mile 3 with numerous short, punchy climbs included. At almost a mile high in elevation, many Cat 2 racers quickly abandoned the prospect of obtaining the peak by brute force of pedal strokes.

After breakfast revisited a few times, racers welcomed fast, tight, and flowy singletrack. The initial section of downhill singletrack was benchcut and unfortunately too tight to pass, and those with faster downhill speed than climbing ability had to have patience to pass. However, it shortly turned to rolling landscape peppered with pinon bushes that poured you out onto doubletrack leading back to the start-line. Cat 3 racers were finished at this point, covering about half of the big loop. Cat 1/Pro and Cat 2 racers continued on for a little more time under the Texas sun. 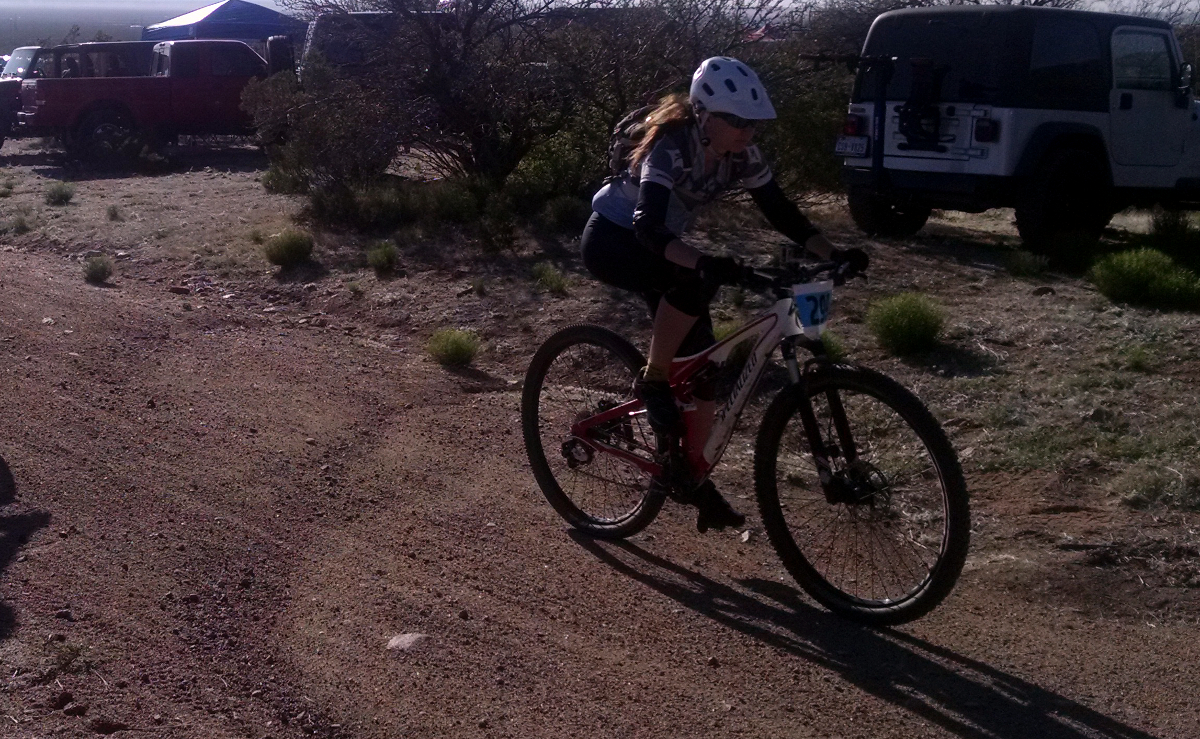 The second half of the loop continued on with rolling singletrack through pinon bushes. About two miles into the second half of the loop, the nose of the bike pointed upward towards the peak of the second climb. Though not near as steep, high, or punchy as the first half of the route, it felt as though it was the climb that would never end, covering almost four miles of rocky doubletrack. The water station serving ice cold water for all weary participants parked near the top of the climb was a sight for sore eyes. I have never been so happy and sad at the same time to see a sign stating “1K TO THE TOP.” I contemplated stopping to photograph the sign to include in this article, with tears in my eyes and a smile on my face. However, any brief stop would have surely resulted in hitching a ride back to the finish line.

Tighter and rockier singletrack back to the finish line rewarded Cat 2 racers with energy still left to enjoy the trails that El Paso had to offer. Cat 1/Pro racers were privileged with a second opportunity to be tortured by climbing yet again. 1 lap of the whole loop was 18 miles and almost 1,800 feet of elevation gain, with Cat 1/Pro racers completing almost 10 miles more and well over 2,500 feet of total elevation gain.

Shannon Gibson took 1st uncontested with a finishing time of 2:51:41.