I’m not sure what made me sign up for the Oak Flats Race as part of the New Mexico Off Road Series. In all honesty, I’ve been eyeing the list of races every year since I’ve moved to New Mexico. And every year I’ve managed to come up with lame excuses not to race. I guess this year I ran out of excuses, especially for a $30 race less than 30 minutes from my house.

I couldn’t believe how nervous I was lining up at the start line. Granted, I had never done a mountain bike race before, but the Cat 3 women’s group was very slim in numbers. In fact, I was the only woman Cat 3 racer in my age group. I was guaranteed a 1st place podium finish, and that alone should have been enough to settle my jitters.

The women in Cat 3 ranged from seasoned veterans to those that appeared to be brand-spanking-new to the sport, let alone racing. While waiting at the start line, one of the girls hit the nail on the head when she mentioned her only goal was to “not biff it.” Deep down that was my goal too, but optimistically I was hoping to come away with the Cat 3 first place finish for a grand prize of $50.

After jockeying ahead of a few of my “competitors” in the first few straight aways, with shakey legs and a pounding heart, I finally settled down and got into a rhythm through the mild rock gardens that lined the beginning of the race course. 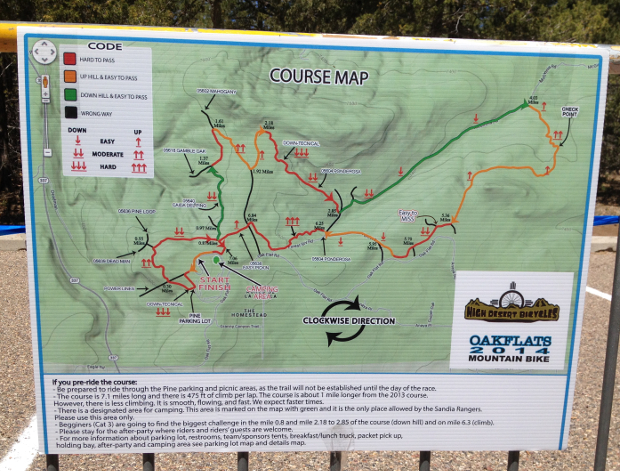 The course description of fast, flowing descents, steep inclines, and easy singletrack was extremely accurate. The trail destruction that naturally occurs with 250 riders making multiple laps added the most difficulty to the race course. Easy rocky sections and tight turns became much more difficult as loose sand built up. Trail conditions such as this slowed down the Cat 3 racers and juniors, causing some bunching and, unfortunately, a couple of wipeouts.  However, as the riders began to stretch out and nerves calmed down, the fun truly began.

Since this was my first race (besides casually Cat 6 racing on the weekdays), I learned a lot in just the first lap:

1. Internally, I’m fairly competitive. On the trail, though, I found myself being nice to my own detriment. This course had numerous spots to pass, but I failed to capitalize as often as I should have, even when others would ask me if I wanted to pass. There wasn’t much difference between my casual Saturday ride and the race. That is, unless I came up on a guy I thought I could pass and stay ahead of. Sorry guys, the raging feminist in me is hard to quell at times.

2. I found that my strong traits were the downhill sections and technical terrain. I was able to partially make up for my slow climbing and wind-sucking. However, due to my inability to pass others during the first lap when the trail was the most crowded, I was unable to capitalize on the downhill. If it’s your first time racing, make sure to position yourself so you can take advantage of your strengths.

3. Eating and drinking while on the race course is tricky, at least for me. I decided to go without a camelback at the last minute. However, my waterbottle holder was unfriendly and led me to storing my water bottle in the back pocket of my (road) jersey. Getting at energy shots in my jersey was also tricky. I haven’t decided if my method was poorly executed or poorly planned to begin with. Perhaps it was a combination of the two.

4. Knowing I was automatically first helped my first-time jitters a lot. It made me more passive on the trail, but it also allowed me to just enjoy the race and the trail. I made sure to catch a little air on the downhills when possible, and even chatted with another competitor while “racing” on the course. I highly recommend signing up for races with as few competitors as possible!

I definitely had some fuel left in the tank at the end of the race, and for the next race I plan to be more competitive. Overall I had a fantastic time, and can’t wait for my next rac!. I have a lot to learn, since race season is kicking into high gear in New Mexico.

If you’re interested in racing some sweet singletrack in New Mexico, there are 8 more races this year as part of the 2014 New Mexico Off Road Series.

Your turn: Share your tips and tricks for mountain bike racing below! We promise not to use it against you at the next race…

“I had a guaranteed podium finish… which means there needs to be more women biking the races instead of watching the men!”

You should have been at the 12 Hours of Mesa Verde! Tons of women riders. You would have been proud; if I had a dollar for every time I heard “on your left” from an alto or soprano rather than a tenor or baritone, it would have covered my race fee!

Just have to chime in and say this was the most creative way to say “there were a lot of women in that race” that I’ve ever heard.

Nice!
I just did Dawn ’til Dusk last weekend, which is a 12 hour race too. There were a lot of women at that one as well. Even many racing that were under 18. Gives me warm and fuzzies 🙂

Props for trying your first race! They’re a ton of fun and will really help push you to become a stronger rider.

How long was this race?

Congratulations on your first race. Glad you enjoyed it. How was it different from Cat 6, aside entry fee?

It was actually a lot more fun. I ended up pushing myself for much longer than I would have faux racing 🙂 It was also really awesome to see how fast the Pro/Cat 1 guys and gals were racing (since I got lapped). Definitely gives me a greater respect for them and also a goal to work towards in terms of fitness.

Nice job! Maybe one of these days I’ll finally sign up for a race…glad you succeeded and didn’t “biff it.” 🙂

You should definitely do a race! It was competitive, but everyone was really friendly.